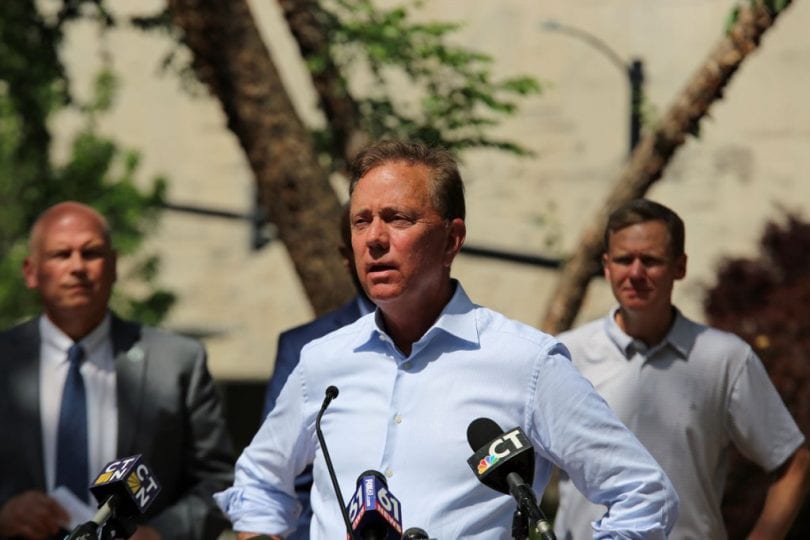 Violence, overdoses, and auto thefts surged during the pandemic, and those increases have continued.

The CARES Act funding will expand community outreach programs aimed at stemming violence and drug overdoses. It will also bolster the state’s capacity for DNA testing and analysis of ammunition shell casings. Federal dollars will boost funding for the Chief Medical Examiner’s Office and enable the creation of regional crime task forces.

“We are not immune. We are not an island and I see what’s happening in other cities and states and our violence is spiking up as well. In particular, gun-related violence,” Gov. Ned Lamont said during a press conference outside Saint Francis Hospital and Medical Center.

Lamont and other officials announced the plan to deal with what they framed as a three-tiered issue. Violence, overdoses and auto thefts all surged last year during the pandemic and those increases have continued into 2021.

“As the pandemic’s effects have begun to recede, these issues have persisted,” Marc Pelka, state undersecretary for criminal justice issues, said.

Lamont and Pelka said that crime rates in Connecticut were still relatively low. Pelka said serious crime was at about half of where it peaked in the 1990s. But Hartford in particular has seen a number of high-profile murders in recent months. Back in April, a three-year-old child was one of two victims killed in apparently unrelated shootings on the same day. Earlier this month, a 56-year-old woman was killed in a drive-by shooting.

House Speaker Matt Ritter, a Hartford Democrat, said that, for members of the community, the violence was not an abstract concept.

“It’s right in their backyards. The message to everybody here is, it’s not just statistics, folks. It’s happening every day at an alarming and increasing rate,” Ritter said. “I can tell you, beyond the stats, we’re all nervous. Let’s be honest, we’re all really nervous what the summer’s going to bring for Hartford and those big cities.”

Andrew Woods, executive director of the violence intervention program Hartford Communities That Care, said the additional funding for outreach groups in Connecticut was long overdue. Woods said members of his organization had responded to St. Francis Hospital more than 300 times in the last 20 months to assist victims of violent crime.

“I’ll tell you something: we are terribly under-resourced. Doing this work is 24/7, 365 days a year,” Woods said. He said there were not enough professionals working in his field in Connecticut. “At the scale that we’re operating at now, in terms of the kind of violence that we’re seeing play out inside our communities — again, it’s like drinking from a fire hydrant.”

Wood said the support from the coronavirus relief funding would help in the short term, but violence prevention programs needed a long term funding solution.

Pelka said outreach funding would also be directed at another pressing public health crisis: deaths by drug overdoses. Fatal drug overdoses spiked by 14.6% from 2019 to 2020, according to statistics from the Public Health Department. Drugs containing the powerful opioid fentanyl made up 85% of the deaths, Pelka said.

“While the country was grappling with a public health emergency, another emergency sustained itself and grew more complicated. That is accidental overdose death,” Pelka said.

Federal money will also be dedicated to help reduce rates of car theft. Since the pandemic, some cities and towns have seen spikes in carjacking, often committed by youths who find car doors unlocked.

This year the legislature considered, but ultimately did not pass a bill to address car thefts. It included authorizing monitoring bracelets for some underaged offenders. Asked about the policy Monday, Emergency Services and Public Protection Commissioner James Rovella said it was “something for the legislature and us to continue to work on.”

Sen. Doug McCrory, D-Hartford, said the problem was a longstanding and institutional issue. He said timing and location was crucial when it comes to prevention efforts.

“We can identify these young people at a very early age. Once we get to about 16 or 17, it’s too late. We’ve got to address this issue at 13, 14 years old when they’re in middle school,” McCrory said. “If we’re getting to the point where we have to create legislation to do something about it, then we missed the ball.”