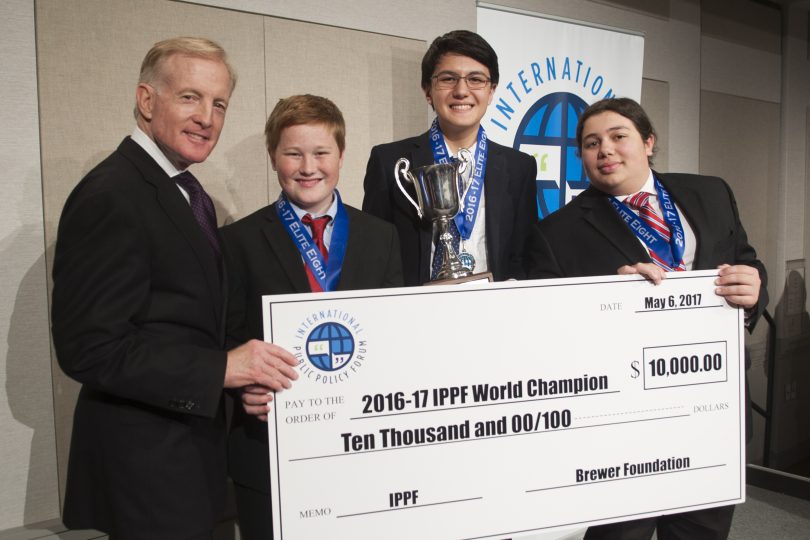 Several West Hartford residents are among the team of Hartford area students who won first place in the 16th Annual Brewer Foundation/NYU International Public Policy Forum (IPPF) Finals on May 6.

Patrick and his five teammates are now the no. 1 high school Public Policy Forum team in the world after beating Taiwan in the final round the weekend of May 6 and winning the $10,000 grand prize.

Coached by Ann Walsh Henderson of West Hartford, the team was comprised of:

High School students from around the world gathered in New York City on Saturday, May 6, to debate one of the most contentious issues of our time: how countries should address the global refugee crisis. The “Elite 8” teams traveled to New York from six U.S. states, China and Taiwan. The top teams emerged from a field of more than 200 teams representing schools in 23 countries.

Founded in 2001, the IPPF is the only international competition that gives high school students the opportunity – for free – to engage in written and oral debates on issues of public policy. The IPPF Finals took place on Saturday, May 6, at The Harold Pratt House in New York City, 58 E. 68th Street at Park Avenue in New York.

“Some of the world’s best and brightest young debaters will [took] the stage on Saturday to compete in the IPPF Finals,” says William A. Brewer III, partner at Brewer, Attorneys & Counselors and founder of the IPPF. “These students have spent much of their school year researching, analyzing and debating one of the most significant and far-reaching public policy issues in history: the global refugee crisis.”