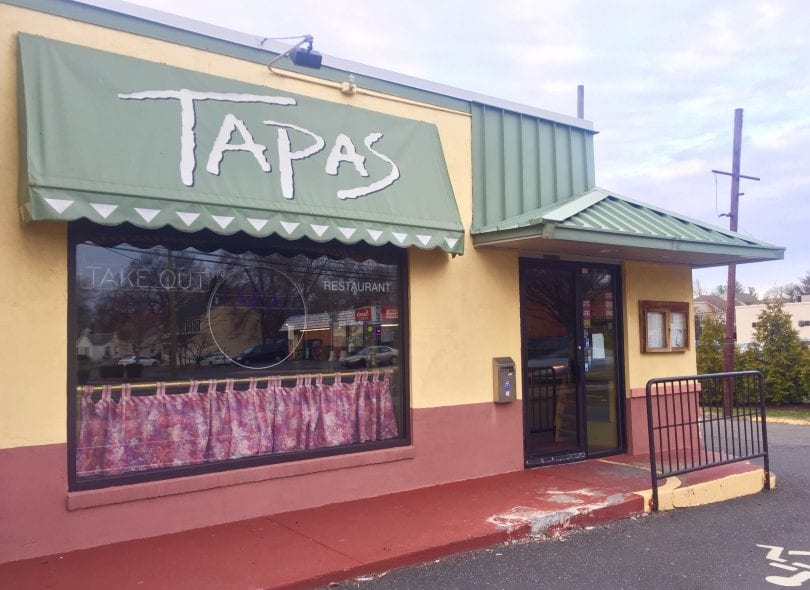 Tapas Restaurant, a mainstay on New Britain Avenue for 32 years, announced April 9, 2018, that it has closed its doors for good. Photo credit: Ronni Newton

Tapas, a mainstay in the Elmwood section of West Hartford for 32 years, announced Monday that it has closed for good.

The doors to West Hartford’s Tapas Restaurant had been locked for several days, the windows dark, and many regular customers were left wondering what had happened to their favorite neighborhood eatery, which had occupied the corner of New Britain Avenue and Mayflower Street for 32 years.

A peek inside the window revealed tables set with napkins and silverware, and menus waiting for diners, but phone calls to the Elmwood restaurant over the weekend were met with a recording that said the customer was “not available.” The person who answered the phone at the Tapas in Bloomfield said that the West Hartford location was closed for a “technical problem” that he would not elaborate on, adding that it was a “temporary closing.”

On Monday afternoon, chef Chip Cutting announced in a Facebook post the news that many had dreaded: “After 32 years of service, Tapas Restaurant in Elmwood has closed its doors for the last time.”

Cutting told We-Ha.com that owner Ted Vetter had been planning to retire several years ago. His wife, his brother, and his best friend had all passed away, and he was ready to pass the torch to his son, but the change in ownership would have necessitated extensive – and expensive – updates to bring things up to code.

“With so many new restaurants opening in town, it was becoming increasingly difficult. Ted just decided that the time was right. The restaurant needs new blood, new concept, something young and hip,” Cutting said.

“I am heartbroken as I’ve put nearly 16 years into it,” said Cutting. “The open kitchen made it twice as fun for me,” he said.

“I loved making food, talking to everyone. It was kinda like the old show ‘Cheers.’ Everyone knew everyone. Huge family,” said Cutting.

When Tapas opened its doors on New Britain Avenue in 1986, many people had never even heard the word “tapas.” The restaurant soon became known for its fresh food, for having a great selection of vegetarian dishes before that was common on menus, and the Greek salad. The salad dressing became so popular that it was sold by the bottle.

In an interview [done by this author] in 2002 for Living in West Hartford Magazine, Vetter said that when he opened Tapas he envisioned it as “a ‘Mediterranean grill,’ what would be called a ‘snack bar’ in New York, but the concept was definitely not mainstream for Central Connecticut.” An early version of the Tapas website noted: “Trying to sell falafel on New Britain Avenue in 1986 was near impossible. People predicted we’d be gone within a year.”

Instead the restaurant lasted nearly 32 years.

Cutting said he’s sad that the ride has come to an end, but he is already looking into new opportunities.

“Tapas Bloomfield will still be there as will the Corner Pug,” both also owned by Vetter. He said that he and the rest of the Tapas staff from Elmwood, thank all of their customers from the bottom of their hearts for their years of loyal patronage.