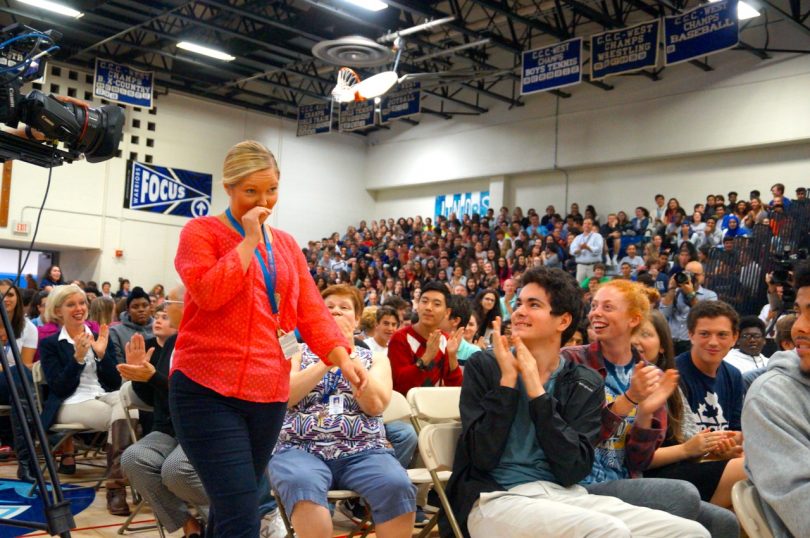 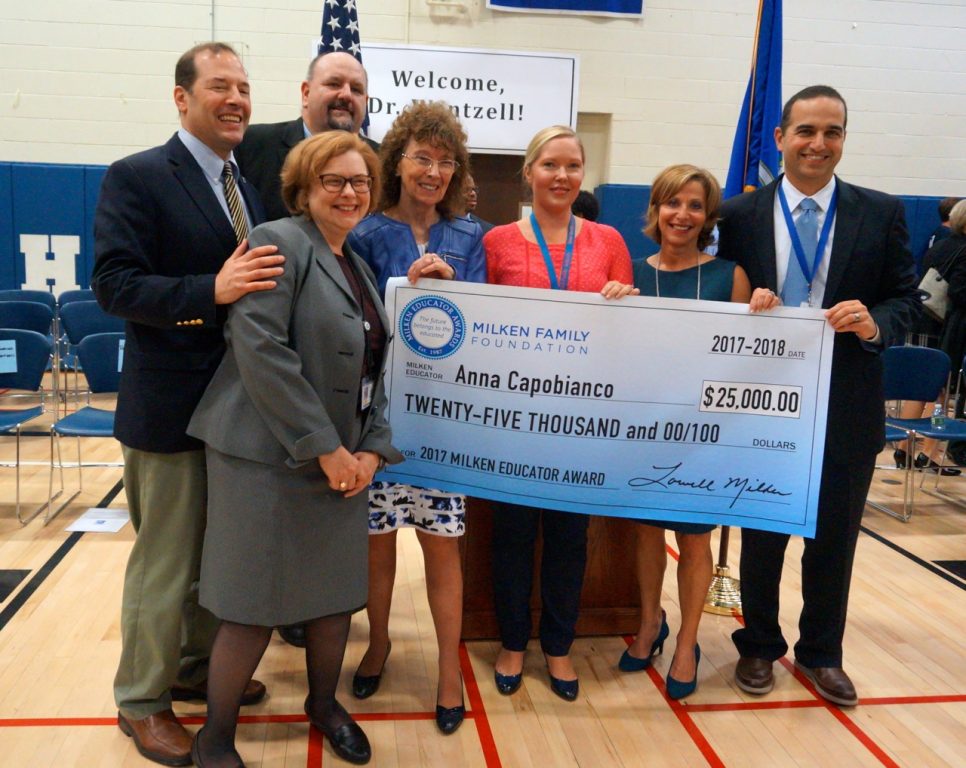 Students, teachers, and staff knew there was going to be an assembly Tuesday morning, but the premise, as posted on the Hall High School website, was that Connecticut State Commissioner of Education Dr. Dianna Wentzell would be visiting to honor the student body for their human rights work, including the annual Human Rights Day observance.

The band played as the entire Hall community filed into the gym, and Principal Dan Zittoun welcomed Wentzell, who indeed was at Hall. She spoke to the students, noting the impact of the school’s activities for International Human Rights Day and other activities, and the “extraordinary efforts of the Hall community to engage in difficult conversations.”

However, Wentzell was really there for another purpose, and so was Dr. Jane Foley, senior vice president of the Milken Educator Awards, who came all the way from Santa Monica, CA.

When Anna Capobianco’s name was announced, she walked toward the front of the gym, holding back tears of joy.

Capobianco, the state’s only Milken Educator Award winner this year, will receive all-expenses-paid trip to the Milken Educator Forum in Washington, D.C., on March 21-24, 2018 – and have the opportunity to network with “an all-star education team” of other Milken Educator honorees who gather to discuss important educational issues with state and federal officials.

Capobianco, 33, and a West Hartford resident, was also presented with a significant financial gift – a $25,000 unrestricted award in recognition for “the exceptional work of this educator for the state and nation.” There are no strings attached at all.

Before she revealed the honoree, Foley built up the excitement in the gym. She told the audience that this was her only stop in Connecticut. “I heard you have the best students in the state,” she said, garnering a round of applause.

“I am here for two reasons,” Foley said. The first is to communicate the important message – “about the critical role that teachers and principals play in our society … the responsibility of preparing all of you for a bright future.”

Foley asked the teachers and staff to stand for a round of applause. “We don’t stand and clap and have ceremonies for educators very often,” Foley said. That was something that Lowell Milken wanted to change when he created a program 30 years ago to honor outstanding educators.

“One teacher, during his or her career, has the power to positively influence thousands of young people’s lives,” Foley said. If you want to shape the future we ask you to think about becoming a teacher.”

Foley’s other exciting message: “One of the best teachers in the entire country, out of 3 million teachers, is here in your school.”

That teacher, the only one in Connecticut this year out of 45 recipients nationwide, has been chosen to receive the Milken Award – known as “the Oscars of teaching.” There’s no application process, Foley said. “We find you, we search.”

Foley told We-Ha.com after the ceremony that Capobianco represents the top 1 percent, and really brings her curriculum alive. She’s also a leader and has a cross-disciplinary approach to her work.

“Wow, I was not expecting this,” Capobianco said, joking that she was shaky because this was the first day in two weeks that she has had caffeine. “Mostly I am really humbled by this. When it was mentioned that there would be an educator in Hall that would be honored, I thought of pretty much anyone in the building who would come first.”

Capobianco thanked her colleagues. “They all deserve this more than me,” she said. She also thanked her students for their dedication, hard work, selflessness, and deep thought.

“I think there might have been a mistake on the envelope, but I don’t see another Capobianco so I’m going to roll with it,” she said.

Capobianco, who grew up in Norwich, is in her sixth year teaching at Hall, her 11th year overall as a teacher. She teaches English to students at multiple grade levels, and has pioneered the College Board’s AP Seminar at Hall. For a link to her biography posted on the Milken Family Foundation website, click here.

When asked following the ceremony what she thought led to her selection, Capobianco said she didn’t really know. “I really love what I do every day. I work to inspire students and fight for them and advocate for them. I think about not just how they can learn skills and read books but how they can be better people, how they can make our world a better place.” She tries to add real world experience to everything she teaches.

Capobianco didn’t immediately know what she would do with the $25,000. “Hopefully something that I can use it to inspire other educators … maybe setting up a foundation. I definitely want to pay it forward.”

Being part of the”Oscars of teaching” is amazing, Capobianco said. “But I wish I had worn a better outfit,” she joked.

Principal Dan Zittoun said it was somewhat complicated to work out the logistics of the surprise assembly. He was notified a few weeks ago that the award would be presented.

It’s notable that Capobianco is so humble,” Zittoun said, but that’s part of what makes her so great. “She is such an outstanding educator but she always wants the students to be the star. She always puts them out there … and will want to celebrate them.” She embodies putting students first, Zittoun said.

“It’s so great for Anna to be recognized, and really be representing Hall and all of the teachers,” Superintendent Tom Moore said after the ceremony. “It’s nice to see somebody so humble. Of all the teachers here, she really didn’t think she’d be getting it.”

Previous Milken Educator Award winners in Connecticut also attended the ceremony. Included was Susi D’Annalfo, who spent 18 years with West Hartford Public Schools as a teacher and athletic director. She won the award in 1995 when she was principal of Litchfield High School. D’Annalfo still lives in West Hartford and praised the district. She and noted that the biggest positive impact on her son Casey, who is now the head men’s lacrosse coach at Tufts University, was Tom Moore who was his teacher and coach at Conard.

Former Wolcott Elementary School Principal Plato Karafalis, who was not at the ceremony, has been the only other to receive the award while working in West Hartford.

According to the Milken Family Foundation website, the awards, typically given to early-to-mid career teachers, are “about bringing attention to these classroom heroes; serving at once as validation, motivation and inspiration to current and future quality educators.” The message: “We recognize you. We value you. We thank you.”

The awards honor the recipients for their achievements, as well as the promise of future success. In the past 30 years, $68 million in individual $25,000 educator awards have been distributed, in addition to the opportunity for networking and professional development.

Michael and Lowell Milken established the Milken Family Foundation in 1982 with the “mission to discover and advance inventive and effective ways of helping people help themselves and those around them lead productive and satisfying lives.” The motto: “The future belongs to the educated.”

The goal of the award is also to encourage more to pursue careers in education “by focusing public attention on the need for able, caring and creative people to join the teaching profession in order to improve achievement for all students,” the website states. 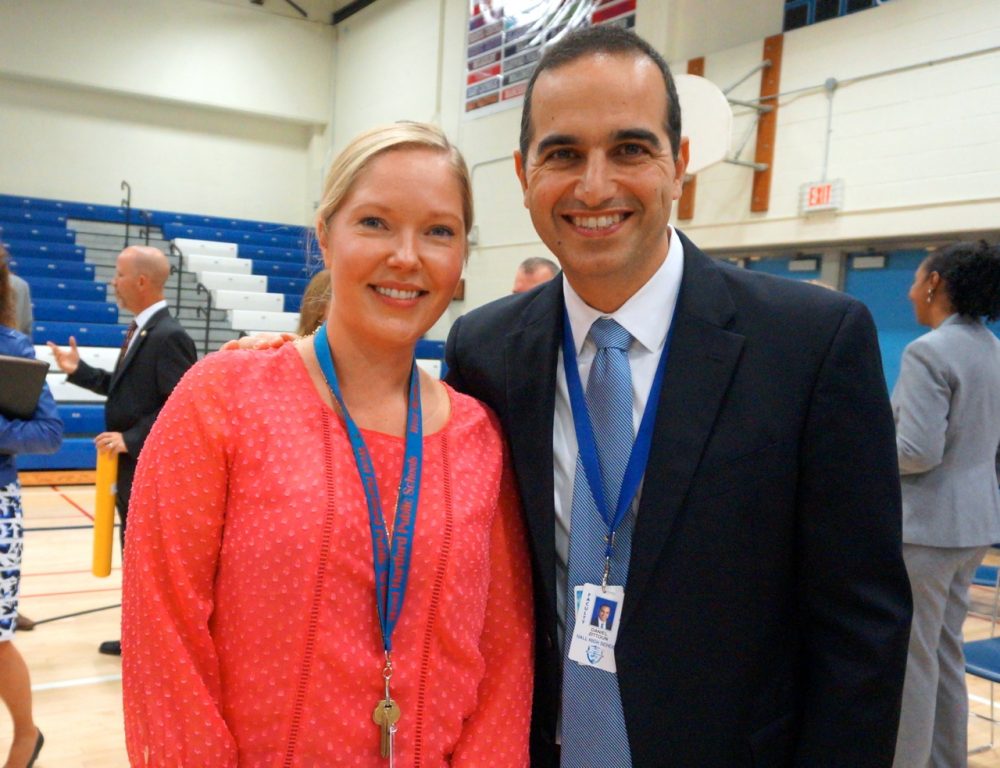 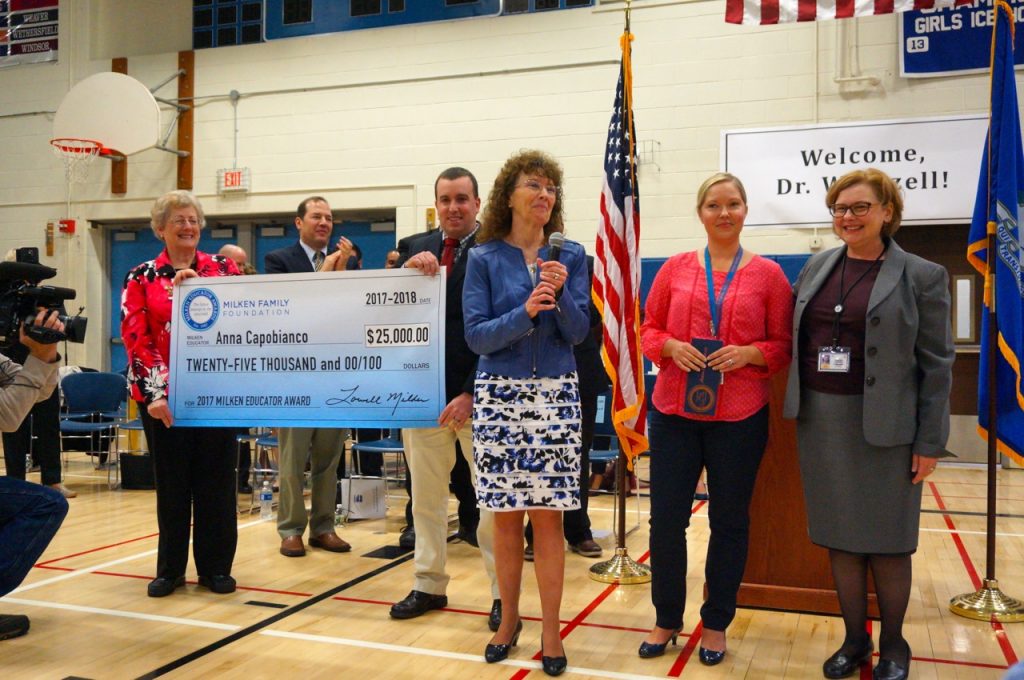 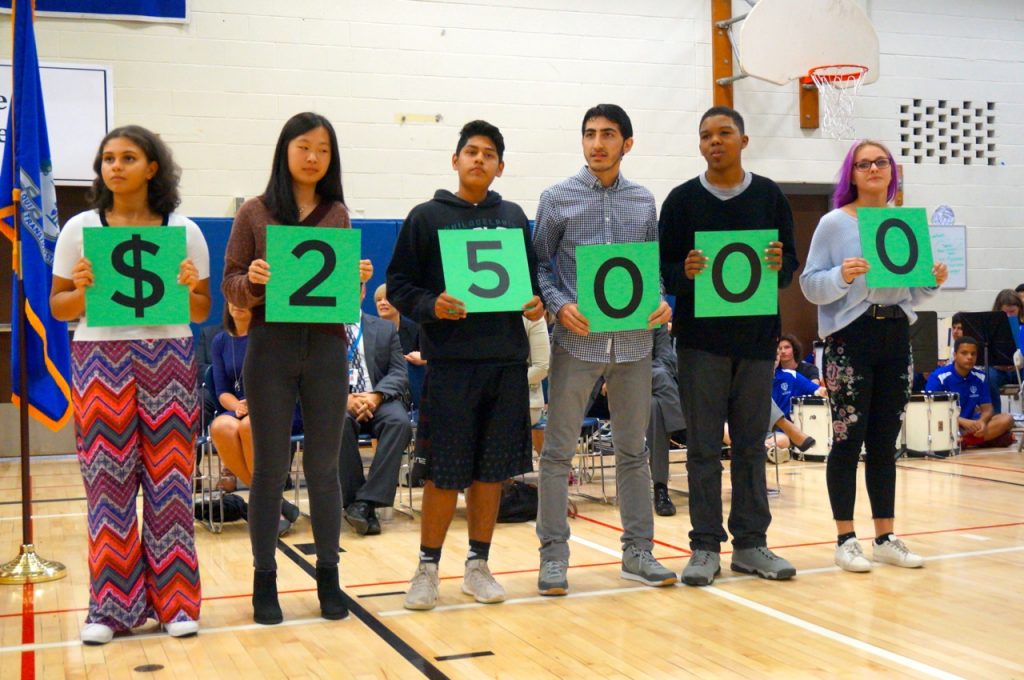 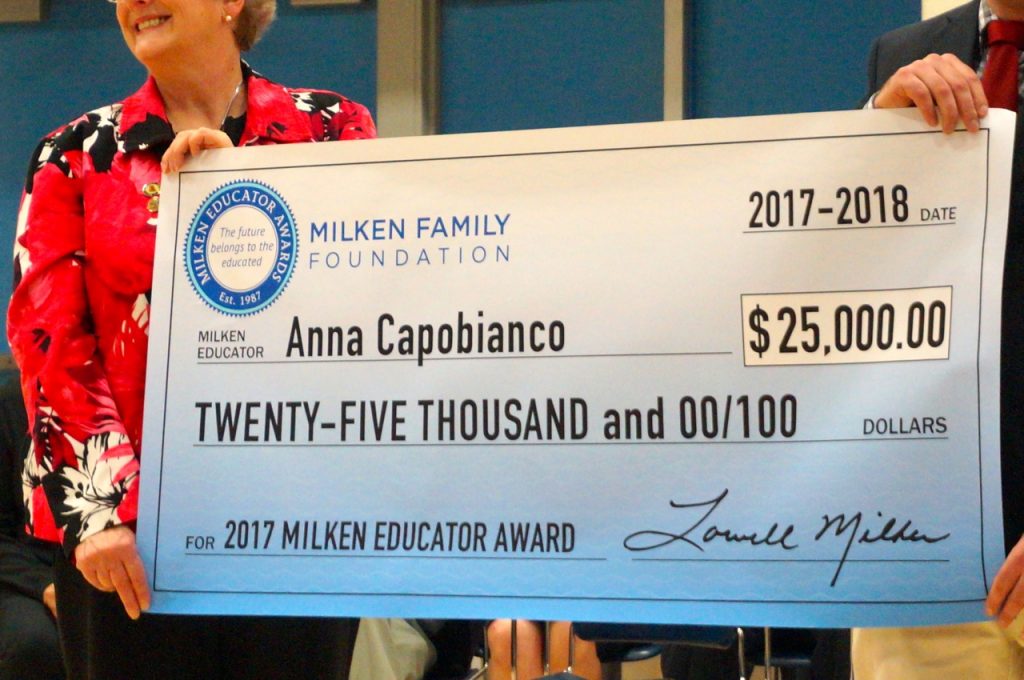 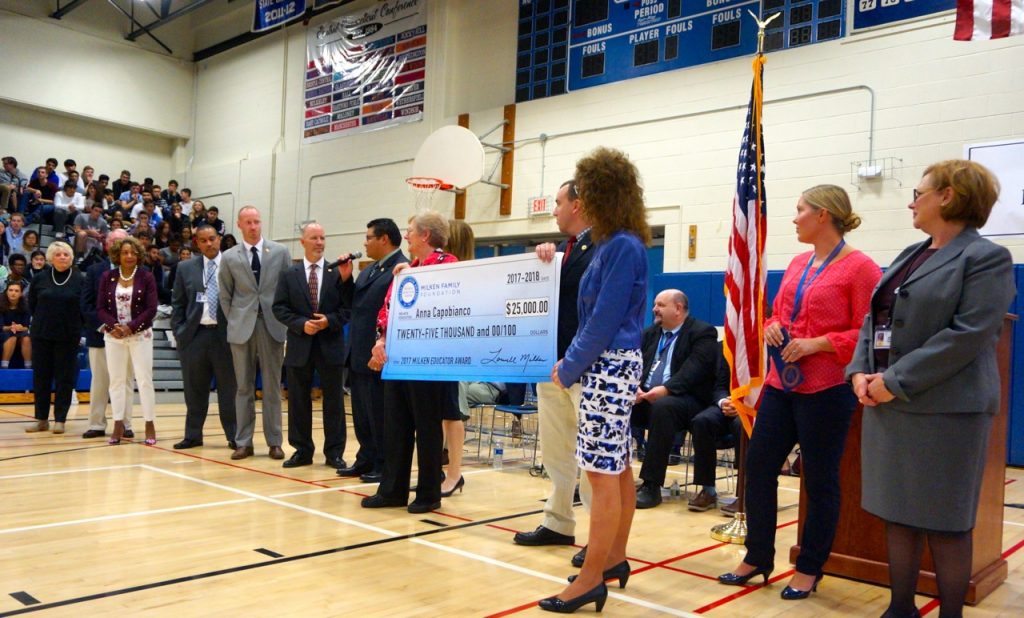 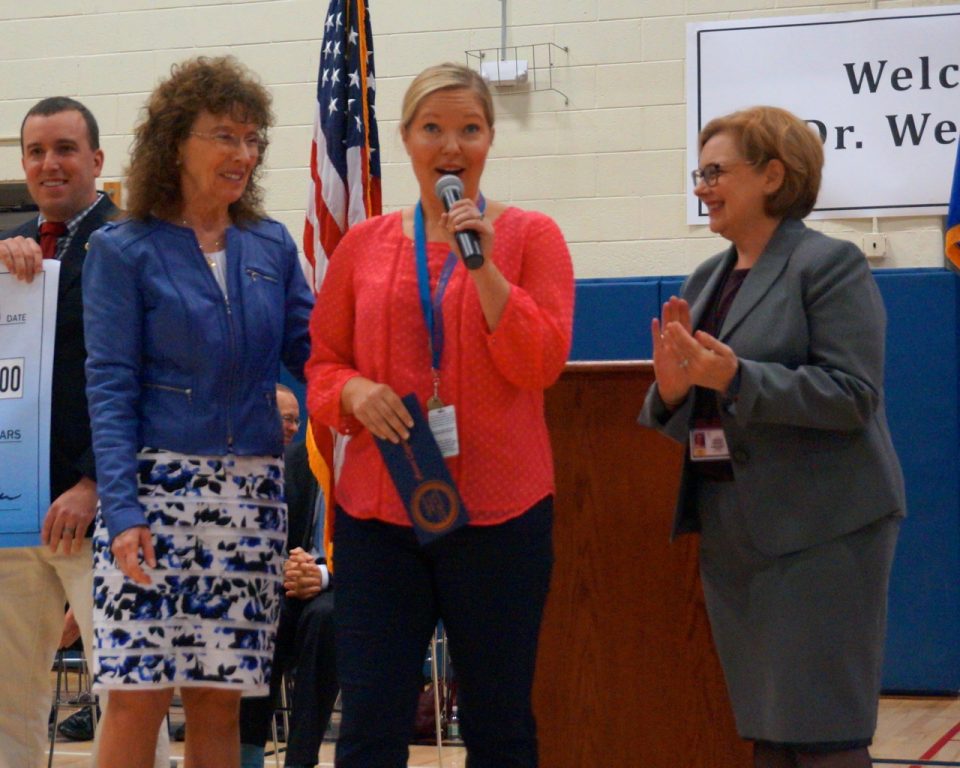 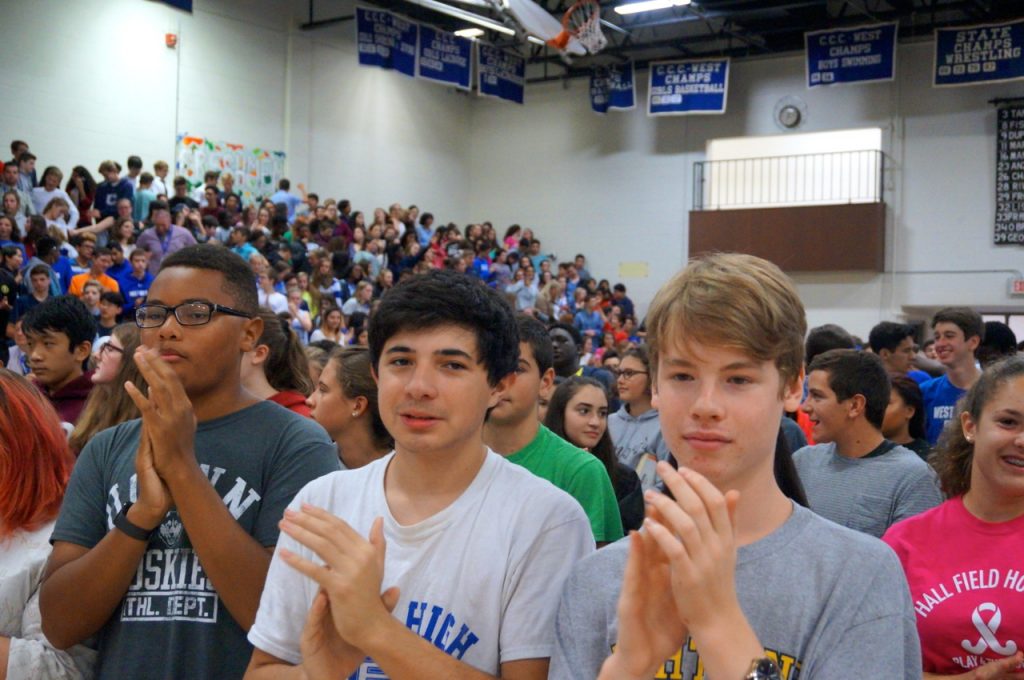 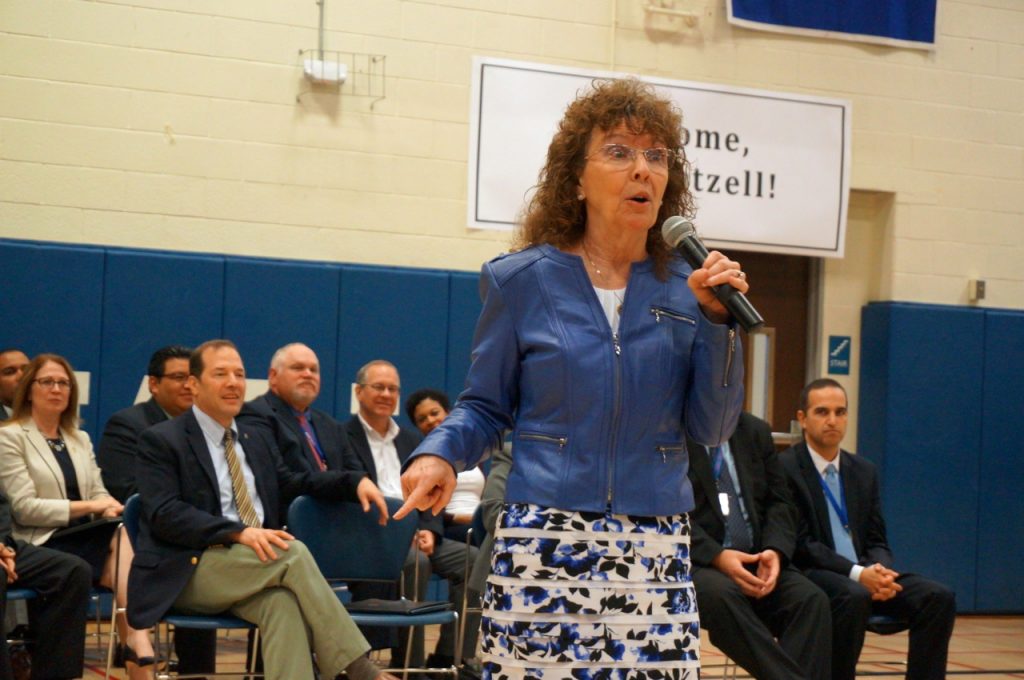 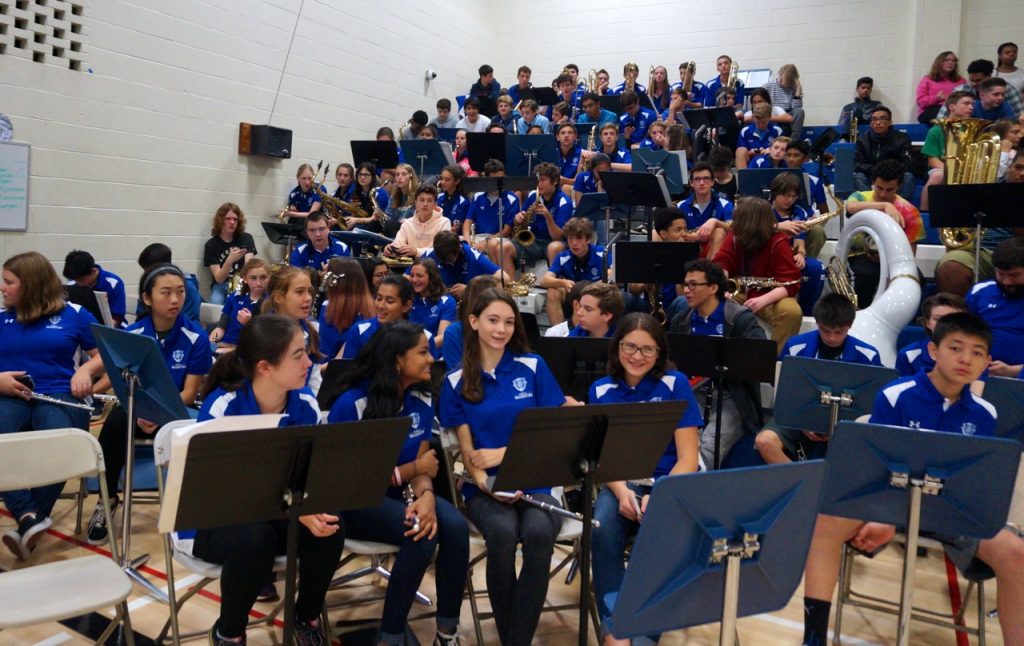