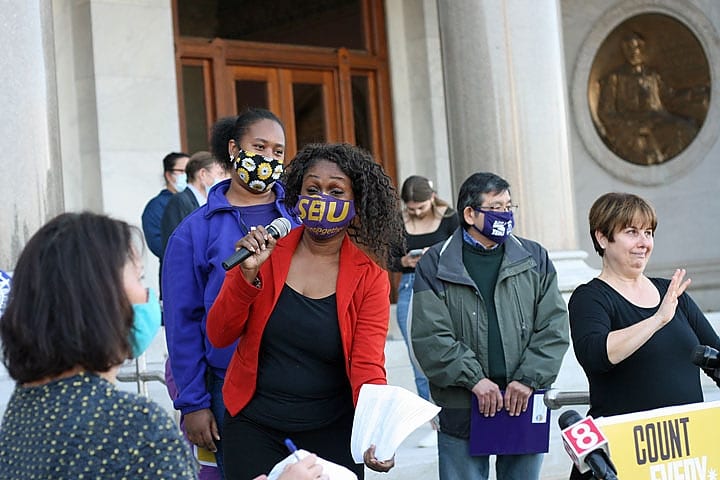 In Connecticut, the Biden/Harris ticket won 59% of the vote, and in West Hartford garnered more than 75% of the vote according to unofficial results published on the Secretary of State’s website.

Emotions ran hot outside the Connecticut State Capitol Saturday as demonstrators on both sides reacted to news that the presidential race had been called for Democrat Joe Biden, signalling the beginning of the end of a bitterly contested election.

What was scheduled as an “Every Vote Counts” rally on the North steps of the Capitol became something else. It was a cathartic and at times defiant celebration for Democrats, who had just watched their candidate named the victor by TV networks after four days of prolonged vote-counting in swing states.

It was a protest of outrage for conservatives, whose candidate, President Donald Trump, had not conceded Saturday and had spent most of the week unsuccessfully attempting to invalidate Biden’s growing leads in states where votes were still being counted. 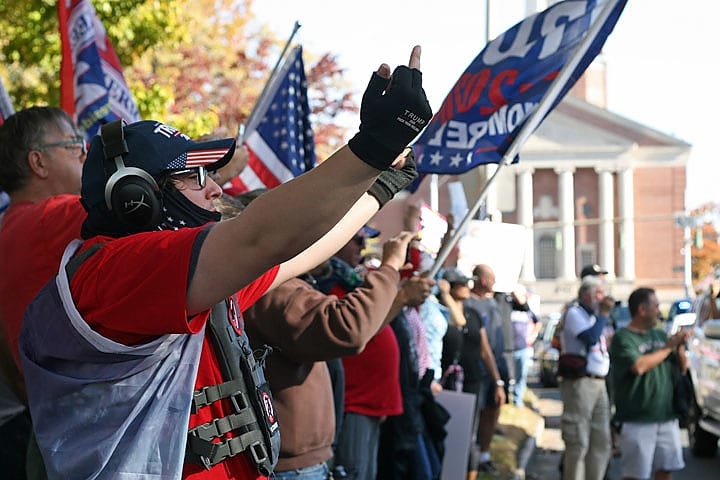 Here in Connecticut, where voters chose Biden by an overwhelming margin Tuesday, hundreds of demonstrators on both sides showed up on the Capitol grounds early Saturday afternoon ready to shout conflicting narratives in what might well have been a microcosm of this year’s election.

Rochelle Palache, political director for 32BJ SEIU, let out a shriek of excitement as she took a microphone during the rally. She tossed her hair around and danced along the steps of the Capitol. “We won,” she yelled.

“They’re the friggin minority,” she shouted in a nod to a small throng of Trump supporters who had positioned themselves off to one side of the rally. State Capitol police officers hung near to the Trump supporters, whose taunts sometimes overshadowed the rally’s speakers.

“Joe Biden is a pedophile,” one of them screamed. “Smoke crack and rape babies,” someone shouted.

But Palache was undeterred. “We’re the majority. Who’s got the power? We have the power. No, I’m sorry,” she said. “Y’all look a little down. We just won!”

Supporters in the crowd picked up the phrase, chanting “we just won” and drowning out the response from the small group of dissenters. Backed by a drumline from the youths of the Hartford’s Proud Drill, Drum, and Dance Corp., Democrats took a victory lap. 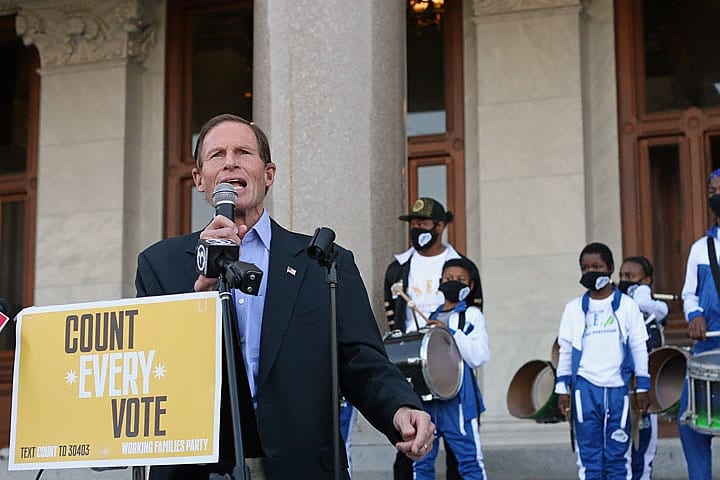 “As was said at a different time, ‘Our long national nightmare is over,’” Blumenthal said. The crowd finished the quote with him then erupted into cheers. And while Trump supporters began to amass on the other side of the Capitol complex, Blumenthal sought to strike a note of unity.

“The challenges are too big and urgent for us to remain divided. We need to come together as a nation under Joe Biden’s leadership for the sake of these children,” he said.

But while reconciliation may be in the country’s future, there was little hint of it on display in Hartford Saturday. As the rally dispersed and many participants departed, a group of Biden supporters made their way to Capitol Avenue and took up a position in front of the Connecticut Supreme Court Building. 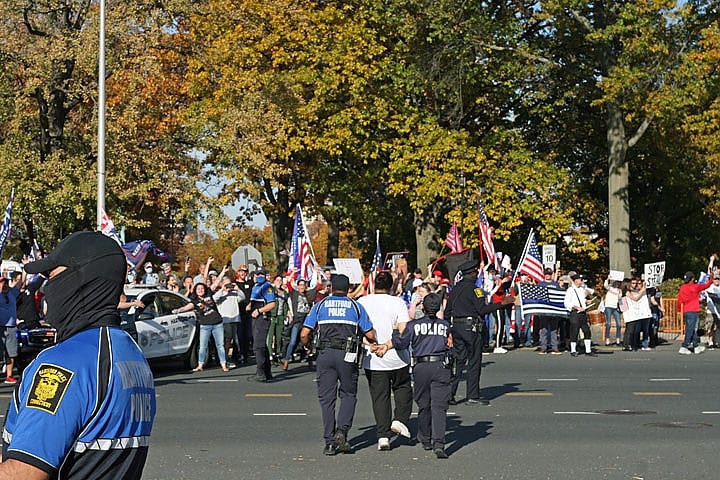 Hundreds of Trump supporters were waiting for them on the other side of the street with flags and signs. For more than a half hour, the two groups stood on either side of the street like opposing armies, shouting mockeries at each other as passing cars blared their horns. Twice, Biden supporters spilled out into the street and came into direct conflict with the Trump supporters. Both times Capitol and Hartford police officers pried them apart, separating the two sides like wrestling referees.

Many Trump supporters dismissed the call in Biden’s favor as posturing by a sympathetic media.

“The mainstream media are overpaid puppets of the elite. They’re not reporting the truth or the fraud,” said Noemi Soto, of the group Bring Glory to God. Soto was milling around in the Trump crowd, passing out petitions alleging fraud and conspiracy in the election results. 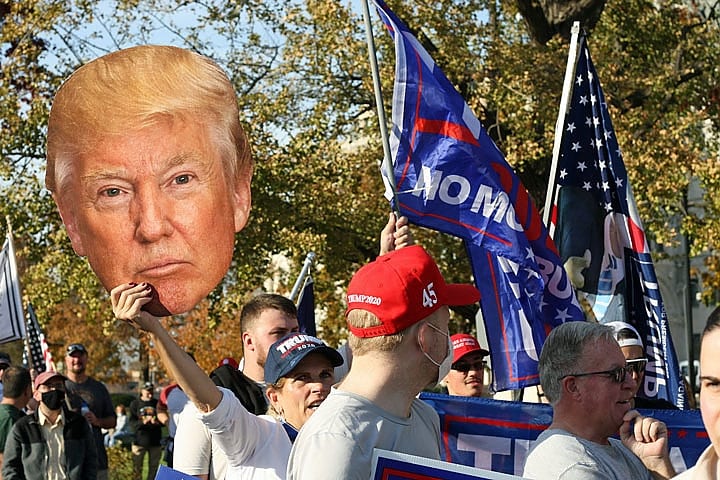 In the aftermath of Election Day, Trump’s legal team launched several challenges to vote-counting operations in close states. Courts have dismissed some of those complaints, but Soto said she expects that other lawsuits on behalf of the president will be successful. When it’s all said and done, Soto said she believes Trump will be re-elected.

“Absolutely. Without a doubt, this will go to Trump,” she said.

Tensions flared again as a convoy of Trump supporters came down Capitol Avenue in flag-adorned trucks, cars and motorcycles. They beeped their horns, revved their engines and shouted back at the pro-Biden demonstrators. Both sides exchanged middle fingers as police redirected the convoy down Washington Street. They circled the Marquis de Lafayette memorial statue and came around for another pass.

“Go the [expletive] home, you lost,” someone shouted.

One woman took off into the street, chasing one of the Trump vehicles. She hurled something at the car. Police caught up with her and detained her. 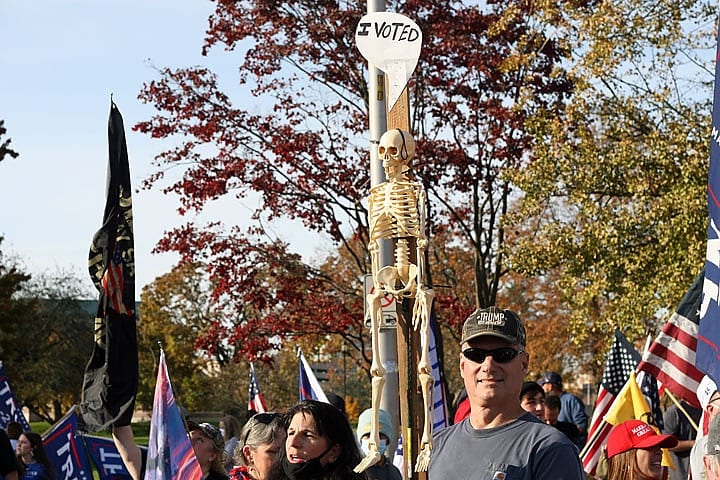 Mike Rogers said he expects the next president will ultimately be accepted by all. Photo credit: Hugh McQuaid, CTNewsJunkie.com

From a unity standpoint, it was not a very promising scene. But sometimes reconciliation takes time. Mike Rogers, a Trump supporter who arrived at the Capitol with a Halloween skeleton fixed to a piece of wood with a dialogue bubble that read “I voted,” said he expected that in time, the country would coalesce around the next president.

“Listen, I think Trump did a phenomenal job. These career politicians aren’t getting it done. But I’m going to support the outcome of this election,” he said. “We are still all citizens of this great nation. Hopefully the country will come together. We’ll see what happens.”