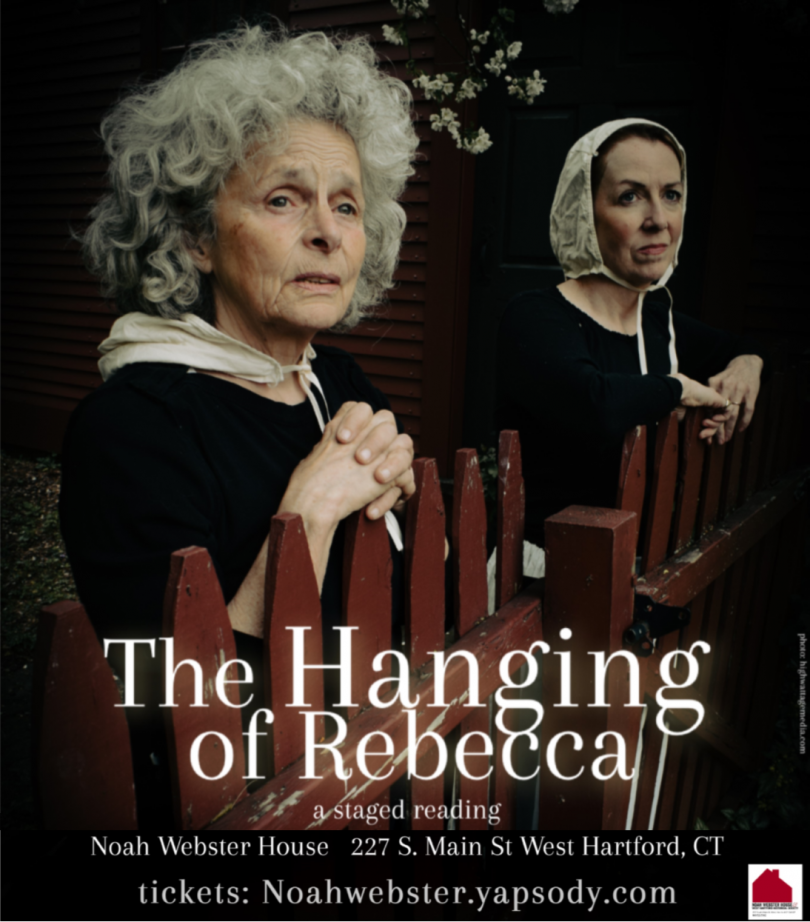 A staged reading of a new play, ‘The Hanging of Rebecca,’ will be held at the Noah Webster House & West Hartford Historical Society.

The Noah Webster House and West Hartford Historical Society hosts a staged reading of “The Hanging of Rebecca” by playwright Debra Walsh on June 24, 25, and 26, 2022.

Connecticut had its own witch hunt, earlier and more gruesome than the infamous trials in Salem, Massachusetts. In “The Hanging of Rebecca” you will learn the harrowing tale and eventual fates of three women caught in this terrifying phase of Connecticut history.

In “The Hanging of Rebecca” you will embark on a journey with Rebecca Greensmith as she grapples with the hysteria in her small community and confronts the fear and devastation wrought by the Connecticut witch trials. The Connecticut witch hysteria of the mid 1600s predated the more widely known Salem witch trials by nearly 30 years and resulted in 37 cases and 11 executions. Panic and suspicion wove through colonial communities and betrayal and deceit flared between neighbors and friends. The play tells the stories of the accused and accuser.

Playwright Debra Walsh has over 30 years experience as a professional actor, producer and theatre arts educator including work with the Heartbeat Ensemble (a social justice theater), Capital Classics Theater, and Bated Breath Theater in many devised pieces, performing in Hartford, New Haven, and New York. She has also been an integral performer in the Noah Webster House & West Hartford Historical Society’s production, “West Hartford Hauntings,” where Debra first encountered the plight of Rebecca Greensmith. Debra has worked with many local schools and arts agencies to develop and implement theater programs and was core faculty in the Theater and Musical Theater Departments at the Greater Hartford Academy of the Arts. Debra is joined by two of her former students, Bryan Swormstedt as director and Patrick “Klokwize” O’Sullivan as composer, to bring life to the innocent victims of the Connecticut witch hysteria.

The staged reading of “The Hanging of Rebecca”  takes place on Friday, June 24 and Saturday, June 25 at 7:30 p.m. and a matinee performance on Sunday, June 26 at 2 p.m. A staged reading incorporates limited props and costuming but is an integral step in the development of a full production piece. A devoted cast of actors will portray the lives of real historical figures in this piece, lasting approximately 45 minutes.

The reading/movement piece will be followed with a social hour and an opportunity to help the 11 people hanged for witchcraft find a pardon. Advance tickets are $10 for the general public and only $5 for museum members, students, and adults or $12 at the door the day of the performance. Seating is extremely limited. Purchase your tickets today at noahwebster.yapsody.com

The Noah Webster House & West Hartford Historical Society is a cultural destination where citizens can learn to understand and appreciate the past. The museum preserves the birthplace of Noah Webster, the founding father, educator, author, and lexicographer who taught generations of Americans what it means to be American. This National Historic Landmark is also a repository for the history of West Hartford, the community that molded Noah Webster’s future and is still thriving over 250 years later. The historic house and exhibit spaces are open Monday through Saturday, 1 to 4 p.m. The West Hartford Gift Shop, supporting the mission of the Noah Webster House, is available online anytime athttps://noahwebsterhouse.org/shop/.