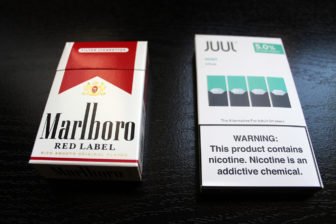 One Juul pod provides about 200 puffs and can contain as much nicotine as a pack of cigarettes. As young adults realize how potent the Juul and other e-cigarettes can be, some are turning back to combustible cigarettes. (Ana B. Ibarra/KHN) Courtesy of CTMirror.org

Here are five things you need to know.

As Connecticut wrestles with a rise in the number of mysterious lung illnesses linked to vaping, the state has increased the legal age to purchase tobacco products.

Beginning Tuesday, businesses will no longer be able to sell cigarettes, cigars, chewing and pipe tobacco and vaping products to people younger than 21. The General Assembly in May threw its support behind the effort, with the Senate approving the measure 33-3 and the House backing it by a vote of 124-22.

Advocates say they hope the change will curb the number of young smokers and prevent others from getting hooked on vaping and cigarettes. Vaping is of particular concern, given its popularity among teenagers.

The number of Connecticut high school students who used e-cigarette products doubled from 2015 to 2017, according to a study released by the state Department of Public Health last fall. Overall, 14.7 percent of high school students reported vaping in 2017, compared to 7.2 percent in 2015.

What kind of impact the law change might have on vaping-related illnesses in the state remains to be seen. No single product or device has been associated with all of the cases.

Here’s a look at what happens when the amendment takes effect:

The legal age to buy tobacco products in Connecticut will jump to 21, up from 18. The state is also imposing greater restrictions on the areas where people can smoke or vape. The practice will be forbidden indoors and outdoors on school property at all times. It currently is only banned inside school buildings while classes are in session or during student activities. The new law also broadens a prohibition on smoking and vaping to include all grounds of a child care facility, rather than just inside a building.

The new law increases the maximum fines that may be imposed on those who sell, distribute or deliver tobacco or vaping products to underage people. The Department of Mental Health and Addiction Services will be able to levy fines of up to $300 for a first offense (up from $200); penalties of up to $750 for a second violation (up from $350); and fines up to $1,000 for each subsequent offense (up from $500). Fines for a second or subsequent violation apply within 24 months of the first offense.

Sanctions may also be handed out to business owners who allow people younger than 21 to purchase tobacco or vaping products from a vending machine. The penalty for a third violation will go up under the new law, from $750 to $1,000. Fines for the first and second offense will remain the same ($500 for a first violation and $750 for a second). Business owners with a third offense must remove the vending machine for a year.

The law also boosts the penalty for each day a cigarette dealer or distributor operates without a license to $50, up from $5.

The Department of Mental Health and Addiction Services will conduct unannounced compliance checks on tobacco and vaping dealers by sending undercover workers aged 16 to 20 into stores. Follow-up checks will be performed at establishments that are caught selling to underage people.

The new law requires business owners and their employees to ask any customer who looks younger than 30 for proof of age (in the form of a driver’s license, valid passport or identity card). It also mandates that stores post a notice stating the legal age to buy tobacco has changed.

Along with the new rules, a vaping tax will be imposed starting Tuesday. Lawmakers and the governor included in the state budget a 40 percent-per-milliliter tax on electronic cigarette liquid that is pre-filled and manufacturer sealed, and a 10 percent tax on the wholesale price of all other vaping products.

Reprinted with permission of The Connecticut Mirror. The author can be reached at  [email protected].