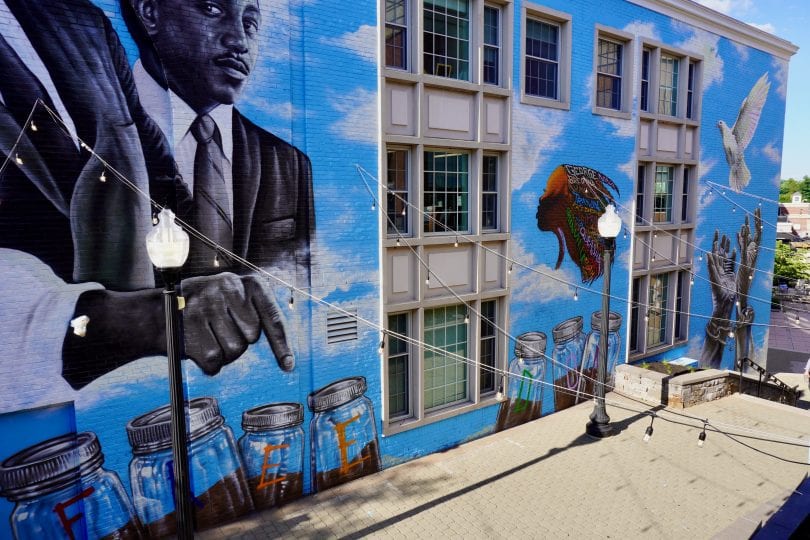 February is Black History Month, and this piece has been submitted by West Hartford Town Historian Tracey Wilson.

Journalist Yamiche Alcindor, speaking at the University of Hartford on Feb. 8, 2022, said that “Freedom is never won, it is always earned. … Each generation must fight for it to build the beloved community.”

The 2,200 square foot Martin Luther King mural painted in June 2021 helps us to keep the concept and reality of freedom alive in this community, in this generation. It reminds us that we stand on the shoulders of those who defined and redefined freedom in the past. 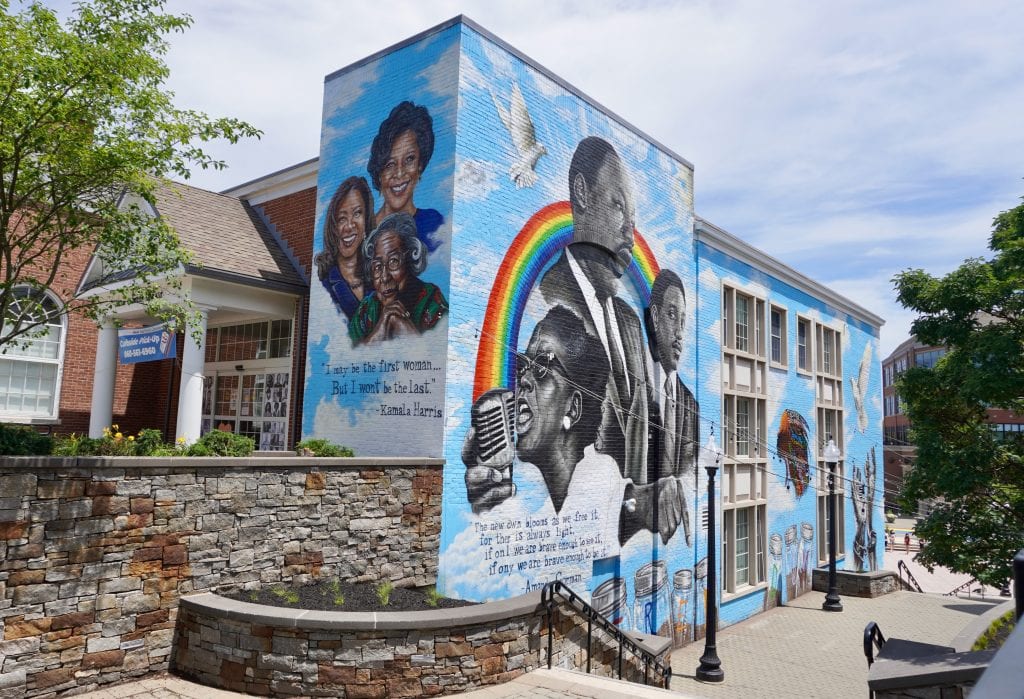 West Hartford’s MLK39 Racial Equity Mural spans the entire side and a portion of the front of the Noah Webster Library in the Center. Photo credit: Ronni Newton (we-ha.com file photo)

On Main Street, three women hold court from high up on the Noah Webster Library, supported by a quote from Vice President Kamala Harris. Down the south side of the library the story of both local and national African American history pushes us to think about “freedom.” All of the people on this wall helped to define freedom and unfreedom in our town. This mural has done much to change the fabric of public spaces in our town.

At the bottom of the mural sit seven painted jars half-filled with soil, spelling FREEDOM. These jars are modeled after those in the Equal Justice Initiative Museum in Montgomery, Alabama. EJI invites communities “to engage in restorative truth-telling efforts to work towards repairing the harms caused as a result of an era of enslavement, an era of Jim Crow segregation and an ongoing era of mass incarceration in our nation.”

EJI’s soil projects asks citizens to travel to the spots where individuals were lynched and dig the earth to fill these jars. A simple label tells the person’s name and their date and place of death. These jars with soil are on display on a wall in the museum.

In West Hartford, community members involved in the Witness Stones Project have dug soil for six people who were enslaved here 300 years ago including Chris, George, Greenville, Frank, Chloe, and Ransom. These jars represent soil from sites in West Hartford where people were enslaved and they draw a parallel to those who were lynched from 1870 to 1940, mostly in the south. 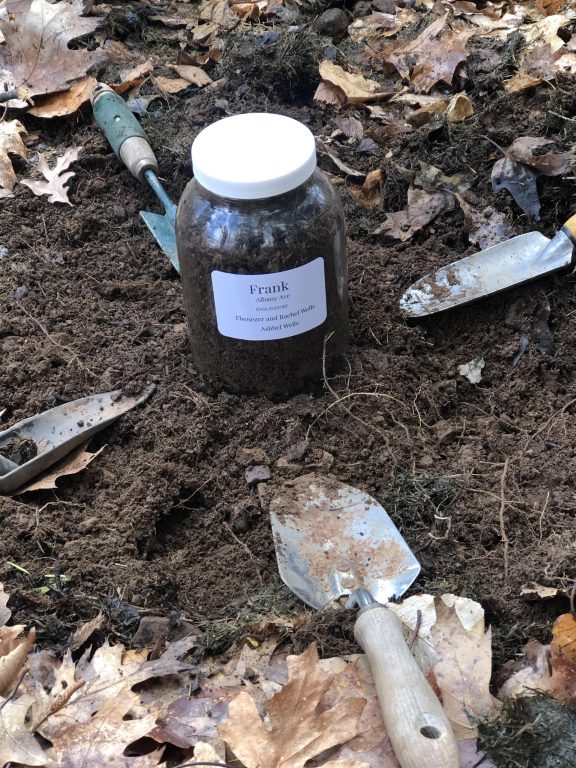 The jars spelling freedom take our eyes to the foot of the stairs to a depiction of Bristow’s hands breaking their chains. It is fitting that the base of the mural begins with Bristow. His gravestone was the only public monument in town acknowledging and commemorating a person of African descent, until 2005. We learn that he was born in Africa and he lived to be 83 years old. We do not have a likeness of Bristow. The muralist, Corey Pane, instead, paints this concept of freedom that Bristow embodied with hands breaking chains and releasing a peace dove. 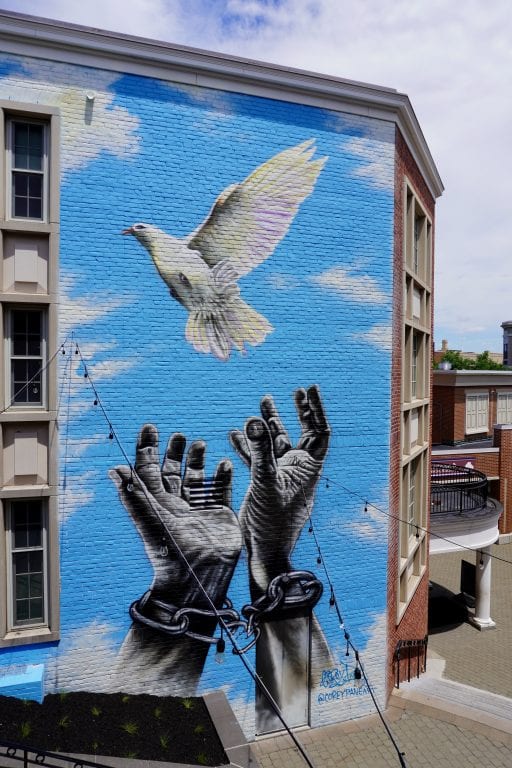 A recent discovery of materials gathered by the Farmington Town Historian reveals that both Bristow and Ambo served in the French and Indian War between 1755 and 1761. Ambo was enslaved by the grandfather of Thomas Hart Hooker who enslaved Bristow. Their service adds another layer to a discussion of freedom.

Often when people enter the military, they know many of their freedoms are taken away as they commit themselves to the greater good. And yet for Bristow and Ambo, they might have experienced a greater level of freedom than in their living circumstances being enslaved. They both traveled to Lake George and each man was paid the same as white men were paid, serving in an integrated militia. 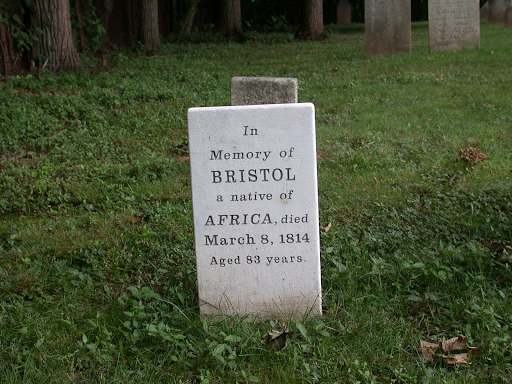 When his gravestone broke in 2003, WHAASCO raised money to replace it; this put into motion several years of research and the discovery of several documents about Bristow who bought his freedom from his enslaver in 1775. His manumission paper, at the Connecticut Historical Society, includes “his mark” denoting Bristow’s signature. His mark is the only tangible document, so far, of an enslaved person who lived in the town. Thomas Hart Hooker, in this manumission paper defines Bristow’s freedom:

I Do Grant to him said Bri∫tow his full Liberty and Freedom from me and my Service that he may go and come when and wherever he plea∫es without any Hindrance or mole∫tation from me or any one claiming from by or under me.

In 1775, Thomas Hart Hooker died in the Revolutionary War, just six months after Bristow’s manumission. Bristow went on to buy land and a grist mill in Bristol. There he was his own master as a farmer and the owner of the mill. He traded with people who wanted their grain ground in his mill and he was able to come and go whenever he pleased.

It is difficult to understand the reconciliation that Bristow made with his enslaver’s family. How much freedom did he have to stay close to Hooker’s family through his work with his brother Roger Hooker?

In 1796 when Bristow was 65, he drew up a will, a sign that he accumulated wealth. Bristow gave all his belongings to his enslaver’s children, Thomas Hart Hooker, Jr. and Abigail Pantry Hooker. Roger Hooker served as the Executor of the will. Seth Collins was one of the witnesses. He married Thomas Hart Hooker’s widow, Sarah Whitman Hooker, reinforcing the fact that in Bristow’s state of freedom, the relationship with his enslavers did not end.

Bristow, a veteran, a farmer, an enslaved person, a free person, a landowner, a mill owner who could come and go when he pleased, helped define freedom as well as any person in the Revolutionary time period. The artistic representation of his hands breaking the chains, remind us that freedom is never won. These hands free a dove representing the struggle, resilience and hope of his story.

To learn more about the mural, watch this community conversation about the mural led by WHAASCO President Earl Exum. https://www.whctv.org/whats-new/1470-community-conversations-a-journey-toward-freedom-excellence-january-20-2022