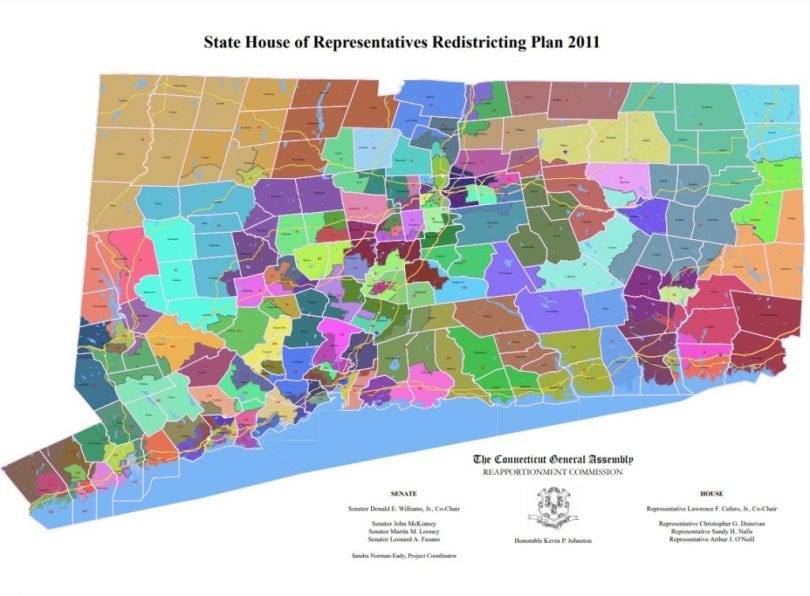 State Rep.Tammy Exum of West Hartford is one of the members of the committee tasked with remapping the state’s voting districts based on the most recent Census.

Connecticut lawmakers kicked off the once-in-a-decade process of remapping the state’s voting districts with an organizational Zoom meeting Monday despite delayed Census data and other complications from the COVID-19 pandemic.

The constitution requires states to readjust the lines of their congressional and legislative voting districts in the year following each U.S. Census survey. The adjustments are designed to ensure each district has an equal number of voters and each vote gets equal representation. In Connecticut, the process is bipartisan, conducted by a committee of eight lawmakers with an equal number of Democrats and Republicans.

The committee met for the first time this year and elected two chairmen: Sen. Kevin Kelly, a Stratford Republican who is the minority leader in the Senate, and Rep. Gregg Haddad, D-Mansfield. Members also approved plans to launch a webpage to expedite the public input in the process.

But from the outset, the lawmakers said their committee faced unusual challenges this year. Most notably, they did not yet have the updated population data on which the new district boundaries must be based. The delay makes it unlikely the committee will meet its first deadline to draft a plan for new maps by Sept. 15.

“I anticipate there is no way we’re going to have plans done before Sept. 15,” House Minority Leader Vincent Candelora told reporters after the meeting. Candelora, a member of the panel, said the group would almost certainly adopt a ninth member to help reach consensus on district maps later in the year.

In February, the U.S. Census Bureau signalled it would not meet its deadline to deliver the information to states by the end of March. The bureau was expected to announce data Monday impacting the apportionment of congressional seats, but full results may not be available to states until late August.

The pandemic will also impact the committee’s tradition of hosting hearings to solicit public input in each of the state’s five congressional districts.

“Obviously, with this year and the challenges associated with COVID, we’re going to have to work and get through those challenges to see what it will look like but we do want to make sure that we get as much public input as possible,” Kelly said.

Although Connecticut takes a bipartisan tack in its committee membership, the process is political by nature. Both parties angle to draw the lines to help cement their control of voting districts.

In 2011, the panel missed its Sept. 15 deadline then appointed a ninth member to help break ties. The nine-member group still failed to reach an agreement on congressional maps before its Nov. 30 deadline. The issue was eventually settled by the state Supreme Court more than two months later.

This year’s remapping process could also be impacted by a push to pass legislation changing which districts prisoners are included in. Under current law, they are considered part of the town where they are incarcerated rather than where they lived when they were locked up.

Opponents call the policy “prison gerrymandering” because it systematically diminishes the representative clout of predominantly Black and brown cities. Although the bill has come before the legislature several times, it would need to be passed this year in order to have an effect on the legislative maps for the next decade.

This year’s bill passed out of the Government Administration and Elections Committee and is awaiting action in the state Senate. Last week, Sen. Gary Winfield, a New Haven Democrat and longtime proponent of changing the law, said he believed the bill had a “real shot this year” despite many years of false starts.

“Look, the conversation is different in many ways, especially considering what this nation and this state are talking about as it relates to issues of historic wrongs,” Winfield said. “Counting prisoners the way that we have is one of those things and you can’t discount the power of this ongoing national and state narrative around these things.”