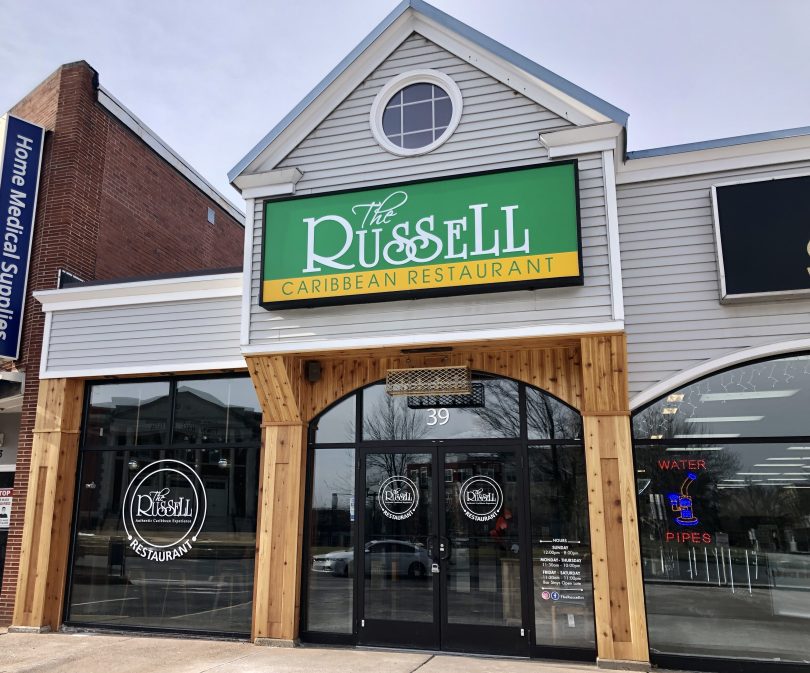 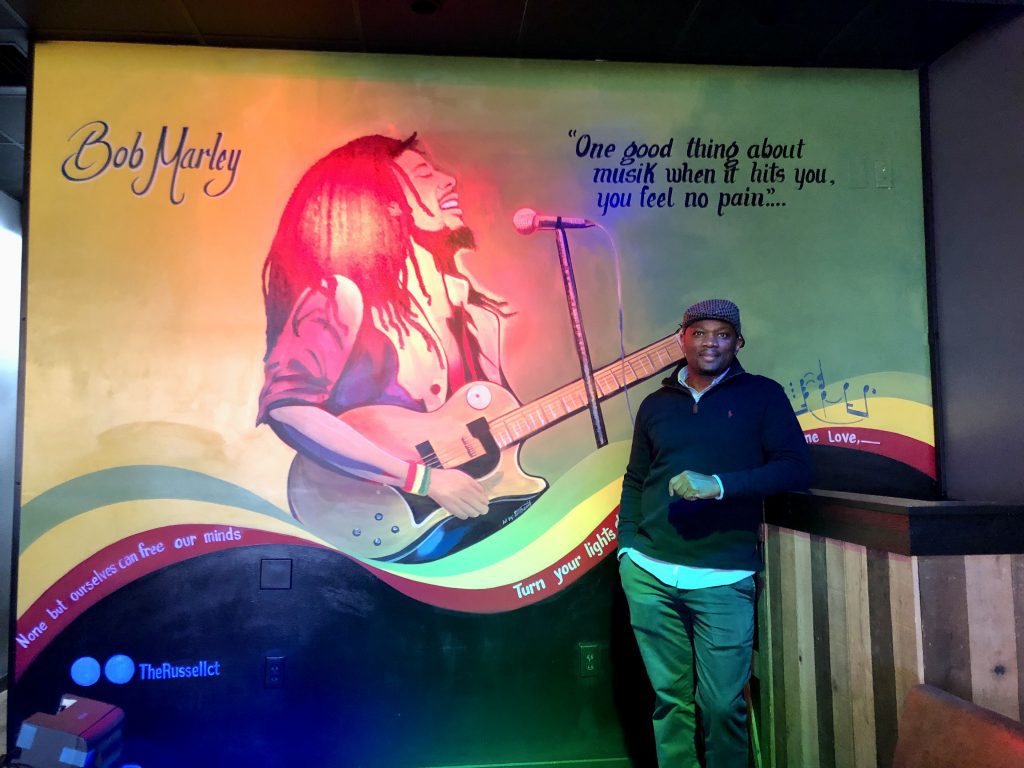 Just across South Main Street from West Hartford Town Hall it’s possible to leave the New England winter behind, and find a vibe that immediately transports you to the Caribbean.

In addition to seeking sunshine and turquoise waters, people go to Jamaican for the food, said Hugh Russell, who officially opened The Russell, the third restaurant bearing his name, at 39 South Main St. in West Hartford on Jan. 27, 2022.

“Every other cuisine is here,” Russell said of West Hartford. “That flavor was missing.” 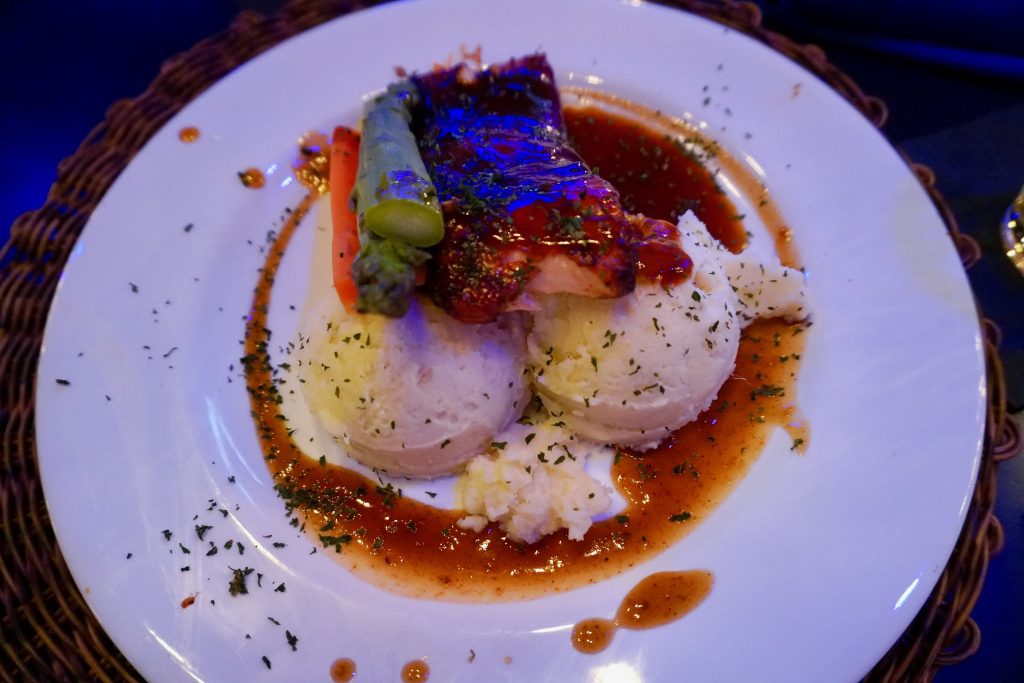 West Hartford is well known as a vibrant dining destination, Russell said. It’s walkable, appeals to families, and there are options for shopping as well as dining. People are willing to try something new, and he’s excited to add to the Jamaican to the mix.

The atmosphere at The Russell is warm and casual, with seating for 60. A new floor-to-ceiling window floods the space with natural light, and the industrial look of the dining room previously home to Harry’s Pizzeria has been transformed with natural wood, and several colorful murals painted by Russell’s friend, artist E. Mohamid, a Jamaican native who lives in Hartford.

The bar has been extended to nearly the full length of the dining area, and while reggae music plays in the background, there are also several large screen TVs tuned to sporting events. A small stage will provide a space for live music, which will be featured beginning this weekend.

Walls at The Russell are painted with murals depicting popular ingredients in the Jamaican fare. Photo credit: Ronni Newton

Even if a diner isn’t specifically familiar with Jamaican food, many people have been to a Caribbean island and will find something that transports them to a tropical paradise, Russell said.

The lunch and dinner menu feature many Jamaican specialties, including Ackee and Salt Fish. “We eat it for breakfast, lunch, and dinner – all day,” said Russell of the item that’s considered “Jamaica’s national dish.” 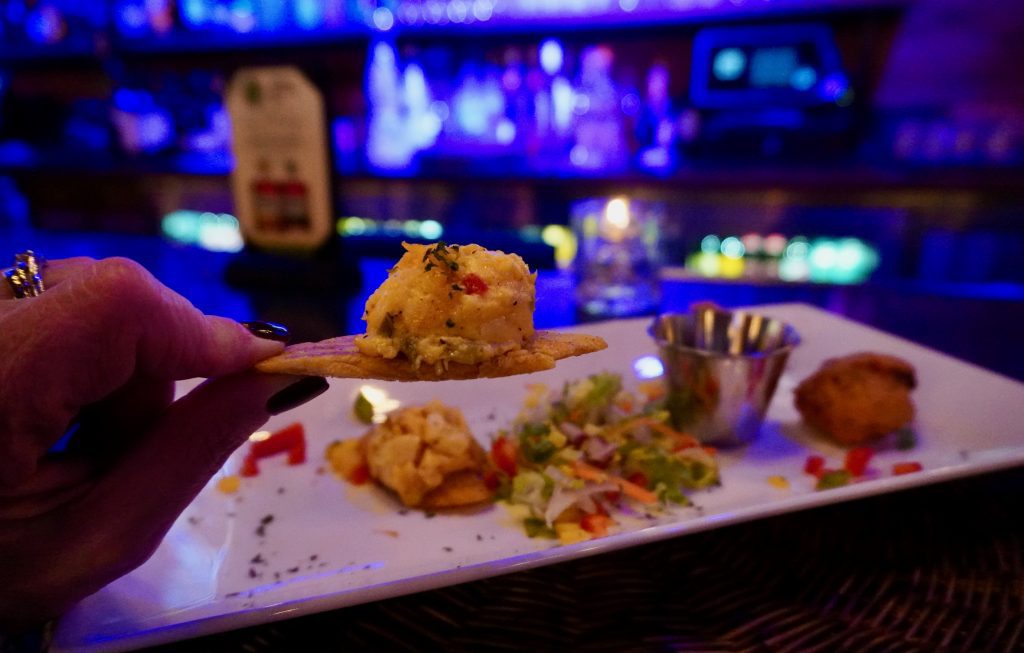 Russell recommends trying the traditional Jamaican dishes like curry goat, oxtail, and jerk chicken. Other popular items, which are a fusion of Jamaican and other cuisines, are the wild mushroom ravioli and penne served with crumbled bacon, both with a Cajun cream sauce.

Jerk chicken is a classic Jamaican dish, and The Russell also features it on a flatbread pizza along with roasted peppers, caramelized onions, and shredded mozzarella and cheddar, with Scotch Bonnet aioli. Scotch Bonnet is a popular Jamaican spice, but for those who don’t want heat there’s peppered steak, patties, and fried chicken. 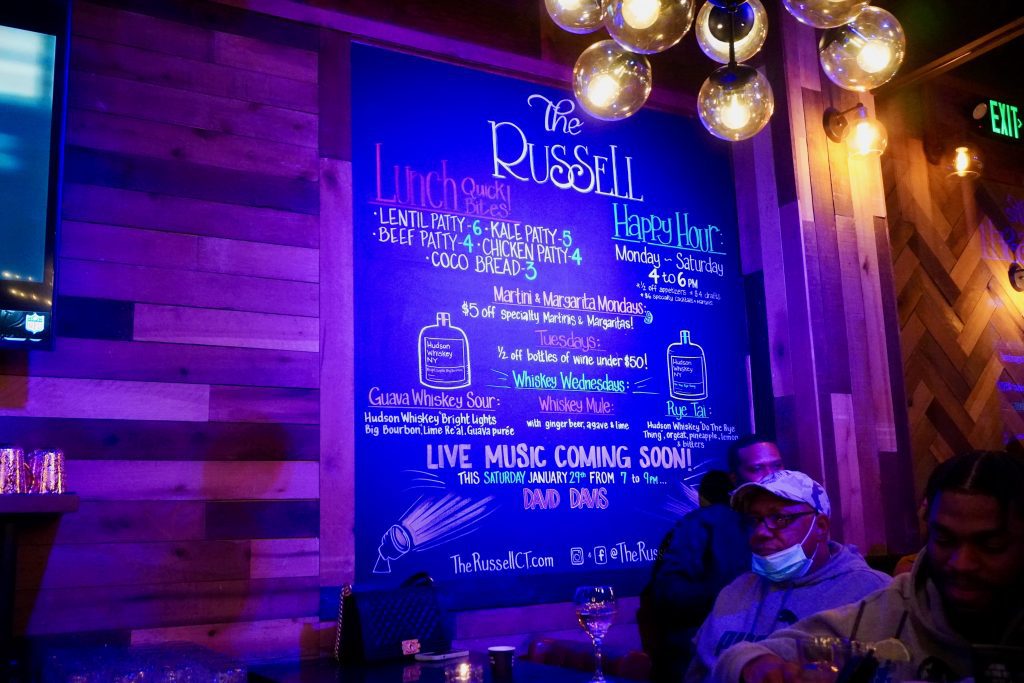 The moderately-priced menu also includes a variety of soups, salads, sandwiches, and desserts. Happy hour is from 4-6 p.m., Monday through Saturday.

Sunday brunch includes Jamaican items, including a porridge of the day, as well as “foreign-style” dishes like omelettes, challah French toast, chicken and waffles, and shrimp and grits.

“There are really good options. I’m really happy with the menu,” Russell said. “We wanted to create something for everyone, kids, too.”

There’s a full bar, with an extensive selection of rum-based tropical cocktails, wine by the bottle or glass, Red Stripe beer in the bottle, and a selection of draft brews. 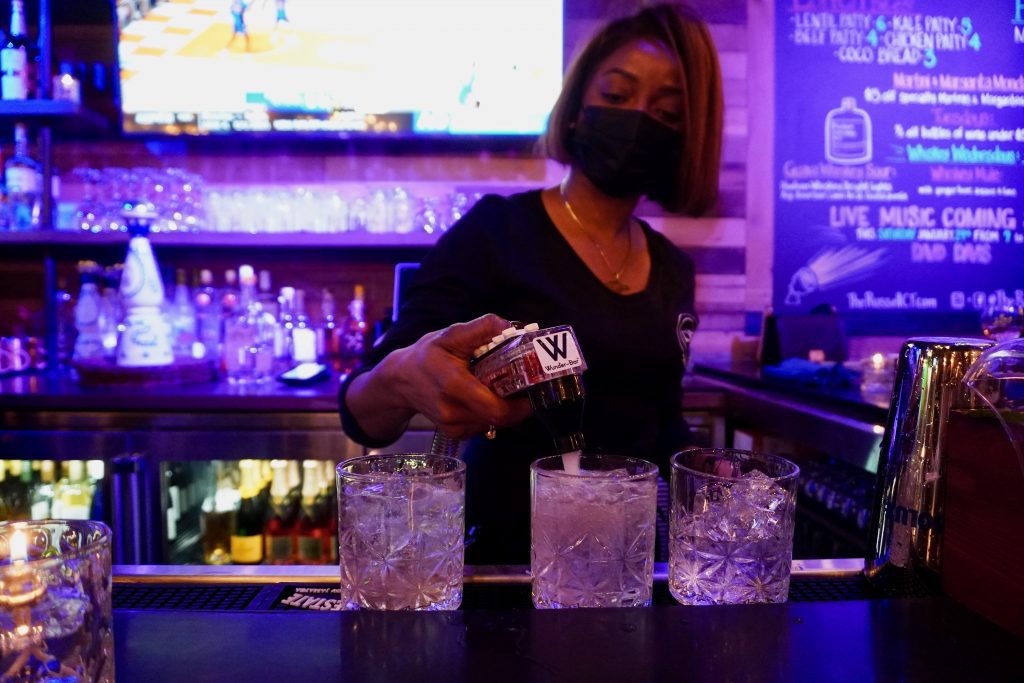 Russell, originally from Jamaica, moved to Florida with his family in 1987, and moved to Connecticut in 1989. He spent 14 years working at the restaurant inside The Wadsworth Atheneum, initially as a host. That’s where he developed his love for the hospitality industry and his appreciation for diverse cultures, and learned that people are not just willing but also excited to try different cuisines.

He opened his first restaurant, The Russell, on Pratt Street in Hartford in 2005, and moved to 187 Allyn St. in 2020. In 2021 he opened a takeout only location at 881 New Britain Ave. in Hartford, also called The Russell. The West Hartford eatery is his third location.

“My experience was really front of house, but now I know about food, about flavors,” he said. The front of house experience also gave him the background in the business side of the industry. He’s hired chefs from Jamaica, and is currently is sharing staff between the three restaurants. 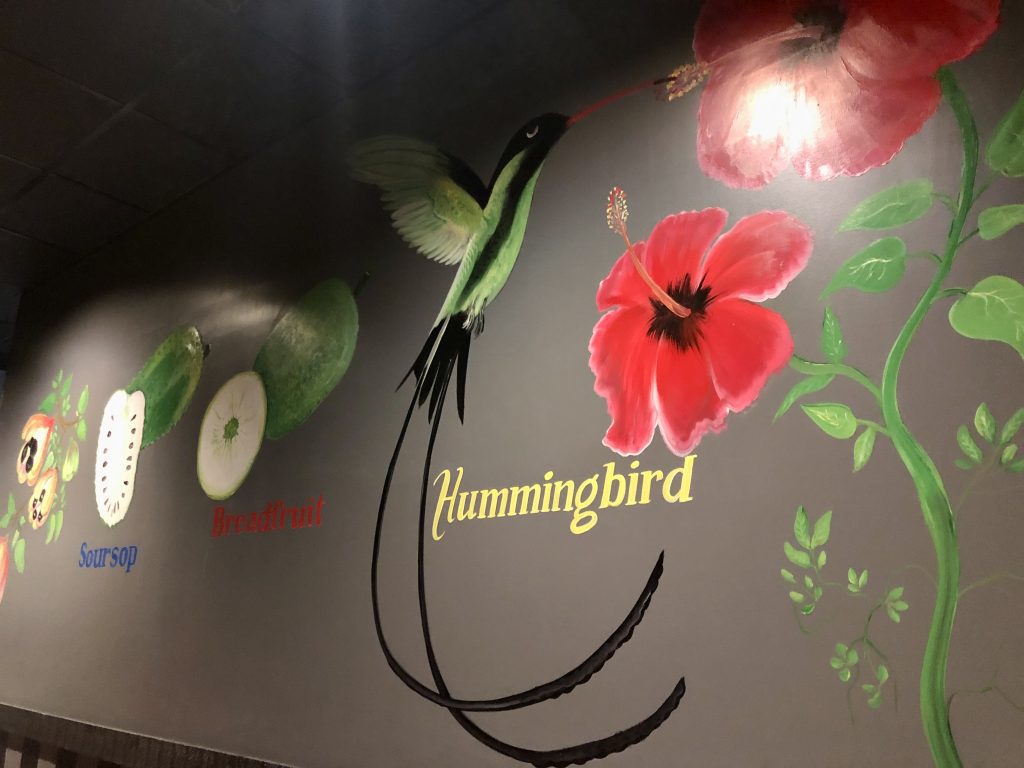 Walls at The Russell are painted with murals depicting popular ingredients in the Jamaican fare. Photo credit: Ronni Newton

While everything is made in house, many of the food items marinate overnight and are slow-cooked rather than made to order at the last minute, which makes it possible for chefs to float between locations. Having the same chefs will also ensure that the authentic flavors are consistent between the three eateries.

Russell, who lives in the West End of Hartford, said he’s known Billy Grant for more than 25 years, and has been eating at Bricco since it opened. He’s a a longtime supporter of many other West Hartford restaurants, and is looking forward to being part of the town’s lively dining scene.

The Russell is open Monday through Saturday for lunch at 11:30 a.m., with dinner served weekdays from 4 until 10 p.m. The kitchen is open until 11 p.m. on weekends, and the bar is open later. Sunday brunch begins at noon. For more information, visit the website, or follow on Facebook or Instagram (@therussellct). 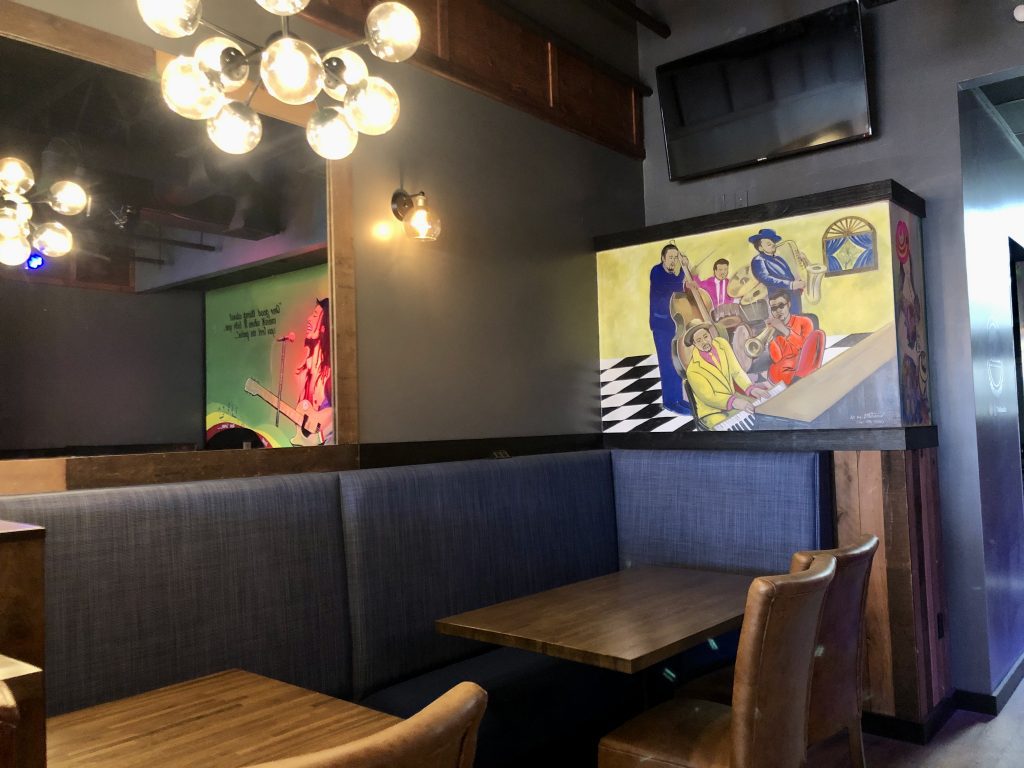 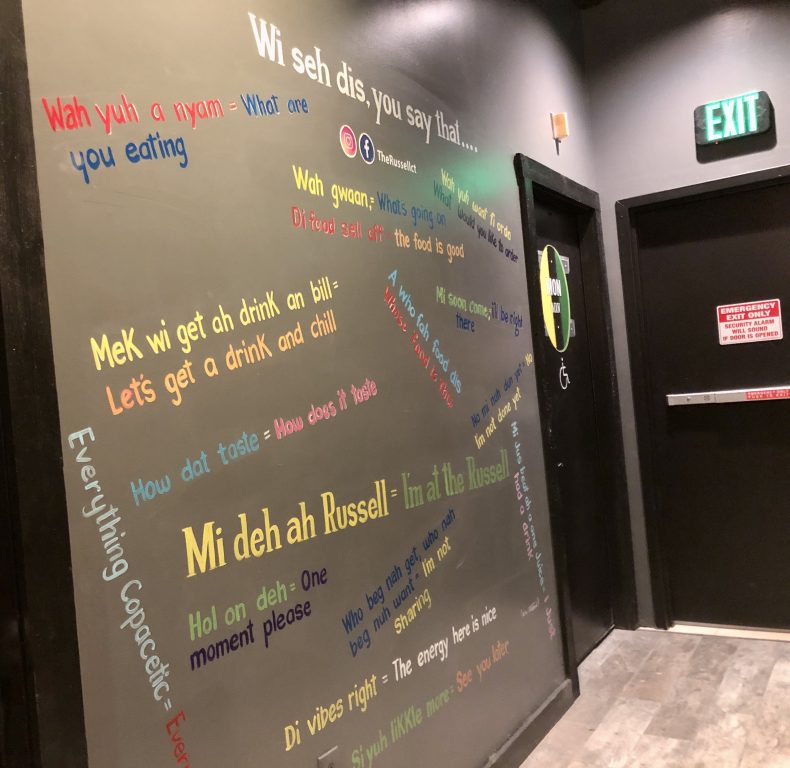 Common Jamaican sayings – and their translations – are painted on the wall in the hallway near the restrooms at The Russell. Photo credit: Ronni Newton 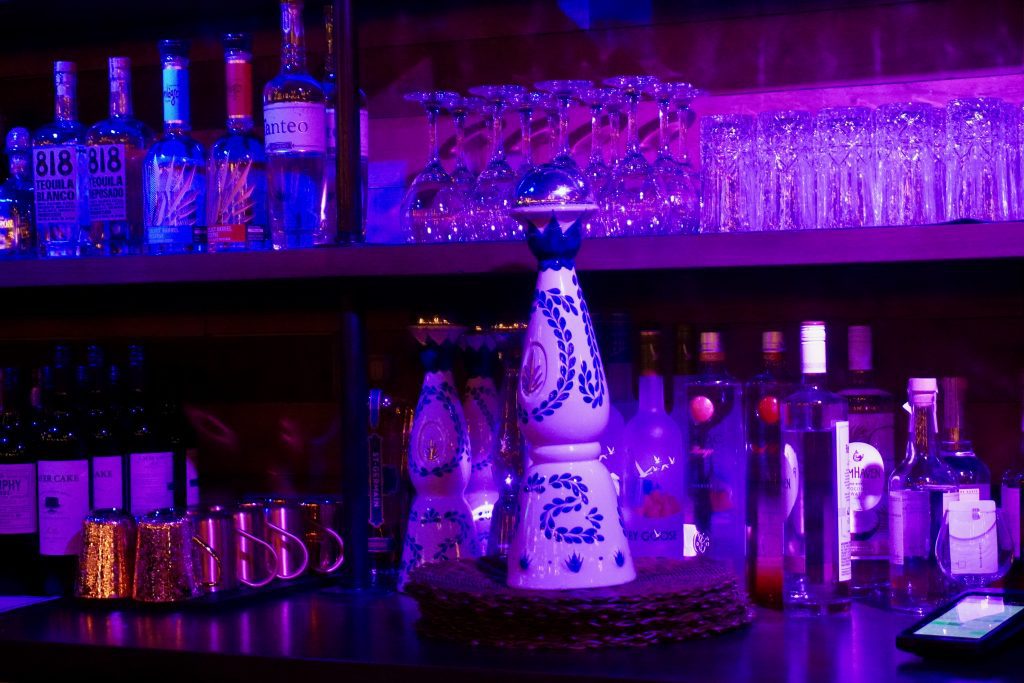 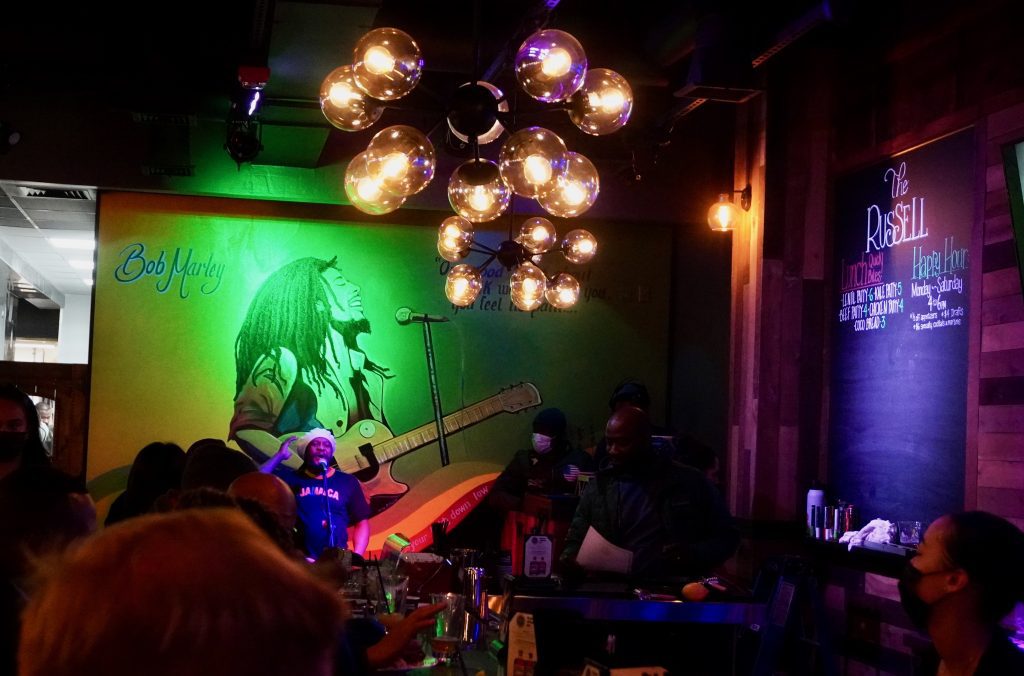 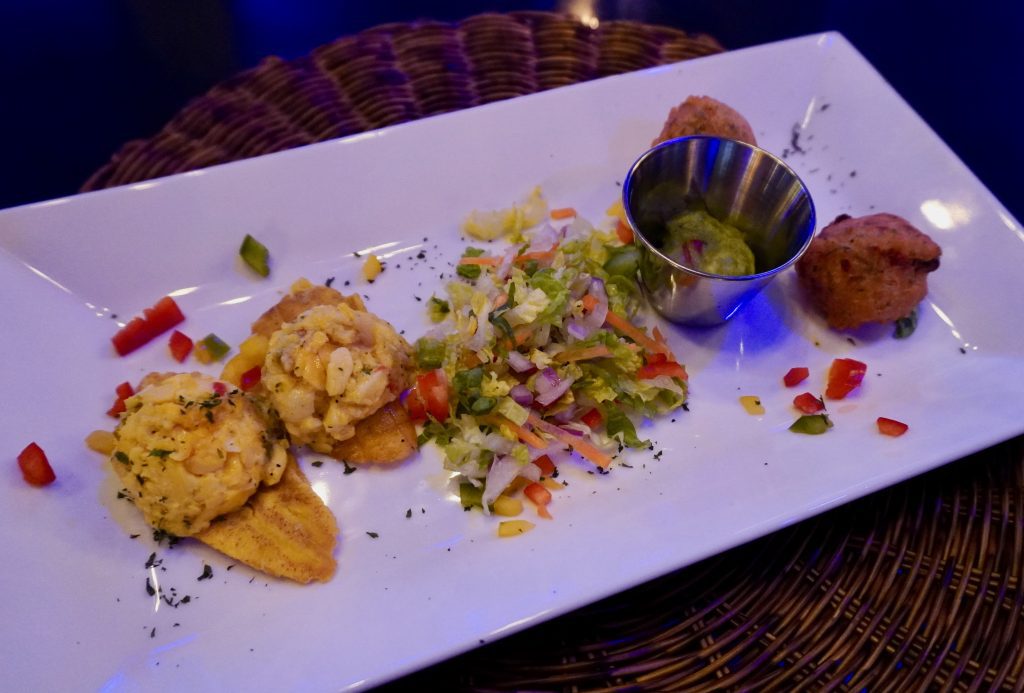