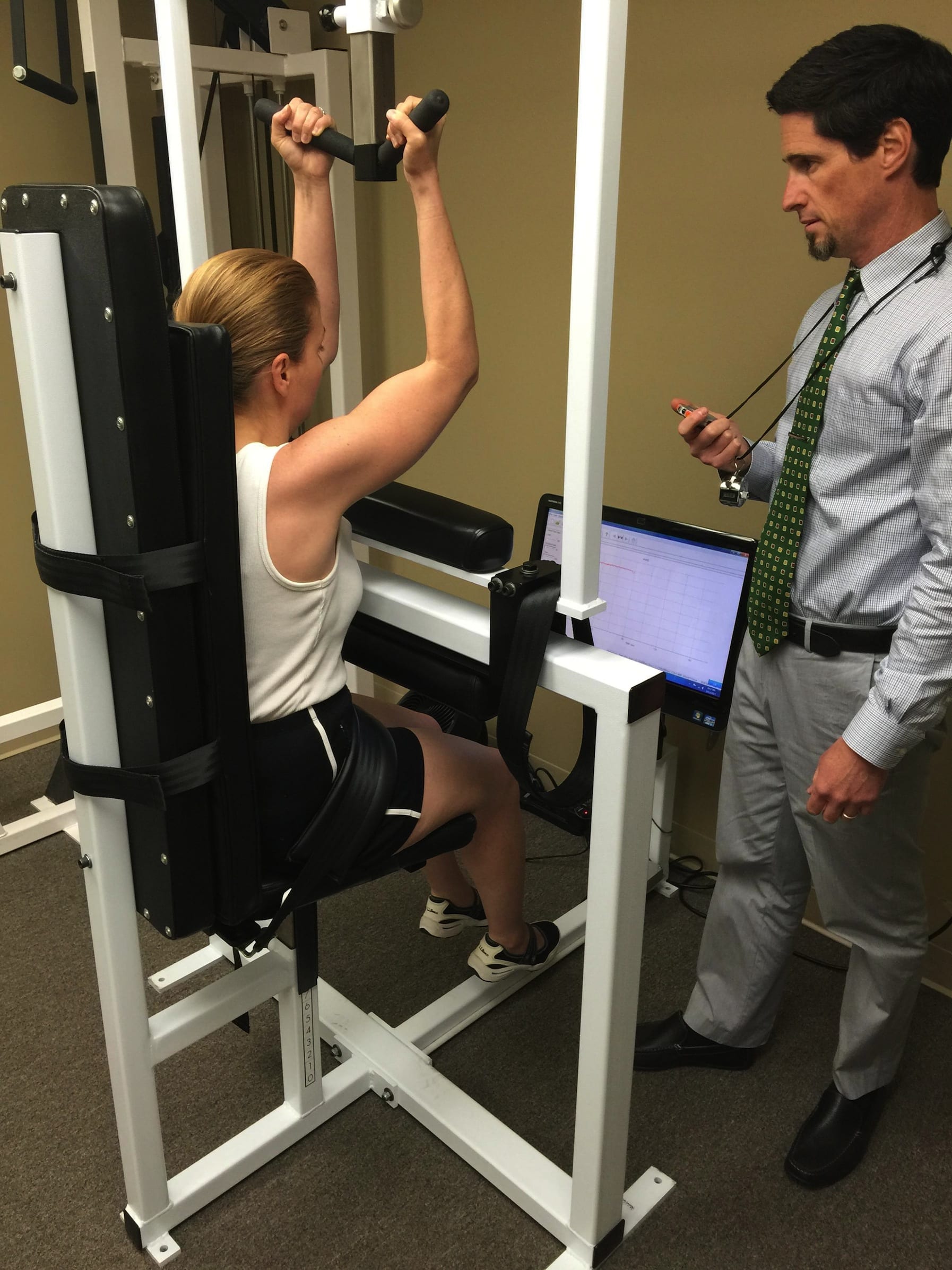 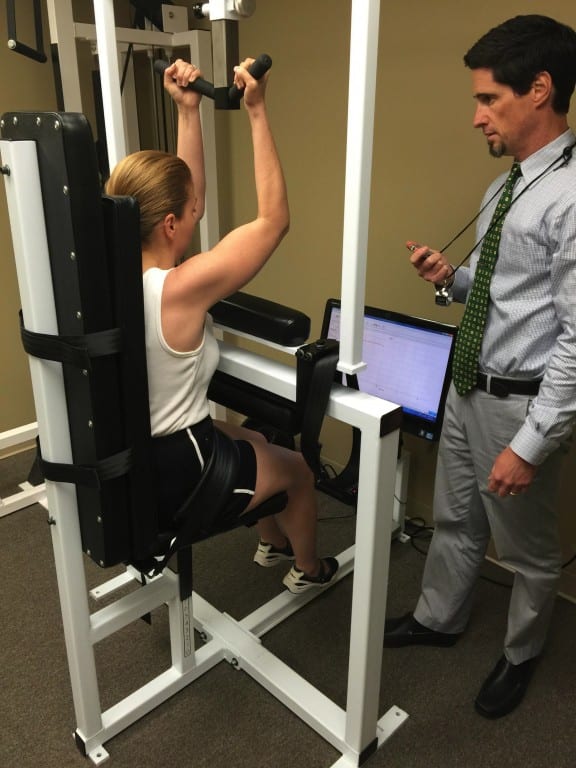 What’s the main obstacle that keeps you from getting in shape? If you’re like most people in our always busy, always rushing, 21st-century world, it’s time – time to work out as effectively as you’d like.

West Hartford native Owen Drolet offers a way to get in shape, build muscle mass, lose weight, and feel better, with only one to two, 20-30 minute workouts every week. With the help of customized, state-of-the art machinery and careful instruction, Drolet promises that his clinical strength exercise regimen at the Strongworks, now located at 125 LaSalle Rd. in West Hartford Center, will help you to make your body leaner, healthier, and more efficient than you’ve ever experienced it before.

That is, if you’re willing to engage in an intellectual pursuit.

“Your body doesn’t want to experience deep muscular fatigue,” Drolet says. “It wants to be efficient and to conserve energy, so it triggers all sorts of instinctual responses in you to fight the process. But what you will learn at the Strongworks are precise techniques to outwit these instincts so you can achieve the appropriate levels of fatigue to get the desired levels of response. You will learn how to truly engage so that you can trigger a muscular growth response and all the desired metabolic effects it produces.”

Drolet, 43, was born and raised in West Hartford. No stranger to intellectual pursuits, he graduated the valedictorian of the School of Visual Arts in New York before becoming a painter, and then an art critic, writer, and editor at Flash Art, in Milan. He left Italy for an opportunity to work with JPMorgan Chase in New York, and then with Goldman Sachs in Los Angeles.

In LA, Drolet was soon commuting for nearly three hours a day by car, even though he was out the door by five o’clock every morning. He found himself gaining weight, along with stress and frustration. Looking around for some way to exercise that would still leave him with time for friends and family, he happened upon Ken Hutchens’ “Super Slow” techniques of weight resistance training.

While he eventually learned that many of the facilities he first visited in LA were offering what he would come to think of as watered-down or substandard versions of the exercise that Hutchins described in his technical materials, Drolet relates that he was nonetheless “blown away” by the results he quickly achieved.

“It was still impressive, even when done wrong,” he related. Drolet, who stands just under six feet, says, “In no time, I went from 180 pounds to 145. I got down to 11 percent body fat, and I felt stronger that I ever had in my life. And I had no trouble maintaining this, just by working out one or two times a week.”

Owen became so deeply immersed in learning about these techniques and how they worked, that gym owners started suggesting he apprentice with them, or even open his own facility. The time for that came when Drolet’s wife and business partner, Roxanne, who is also an advertising executive in New Haven, was pregnant with their son, who is now 7.

Owen couldn’t think of any place he’d rather raise their child than in his old hometown, and so the couple moved back to West Hartford. He even set up his first “Strongworks” studio in his father’s old “Woodworks” carpentry shop on Ridgewood Road, before moving it to West Hartford Center in order to accommodate his growing client list.

The key words in describing the Strongworks experience are “brief, intense, and infrequent.” Drolet offers a high-intensity, slow-movement weight training protocol. What this translates into is four to seven multi-joint exercises that work several muscles simultaneously, with each exercise taking one to four minutes to complete, for a total time of just 20-30 minutes per session.

“Advanced clients can get this down to just 12 minutes, and once you achieve the physique you want, you’ll have no trouble maintaining it with just one or two sessions a week,” claims Drolet, who even after years of researching and teaching his techniques still speaks of them with evident enthusiasm.

“It may sound impossible to get a major workout in just 12 minutes, but I can tell you that none of my advanced clients has ever asked for a thirteenth minute. And the better you get at working harder with this system, the safer it gets.”

The equipment in the Strongworks is not something to be found in your regular commercial gym. Rather, these are meticulously-calibrated and carefully-installed apparatuses, one of which even features a computerized, biofeedback device, which can give you a scientific, real-time assessment of just how effectively you are performing.

Another key to the workout is guidance, with an instructor closely monitoring every moment of your private workout session, in the Strongworks’ new climate-controlled, distraction-free facility.

In a world full of dubious advertisements for “seven-minute abs,” this may sound like one more claim that is too good to be true. But Drolet has based his program on years of scientific research, as well as real-life experience, and he even lists a bibliography of articles on the Strongworks website that support this approach, all of which have appeared in leading, academic health and medical journals.

Drolet says that slow, controlled movement, high-intensity strength training is all about keeping your muscles working continuously and without the aid of momentum in order to generate significant levels of fatigue as quickly and safely as possible. By moving at strictly consistent tempos and changing direction smoothly on extremely low-friction machinery, you not only make the muscular work more demanding, you keep dangerous levels of force on the joints to an absolute minimum. And because you achieve such significant muscular fatigue, your cardiovascular system receives an anaerobic stimulus equivalent to a doing a round of wind sprints.

Drolet points out that several recent studies have shown that such anaerobic exercise performed just once a week has proven more effective at conditioning the cardiovascular system than multiple 30- to 40-minute sessions of traditional aerobic activity like running or biking.

“People often don’t realize that the only way to condition and improve any part of your body, from your heart to your metabolism, to bone health and even hormone regulation, is to do meaningful work with muscle. It is the access point to all those things and that is why we think you have to build your exercise program around it. It is where exercise begins and ends and with the right approach and a willingness to truly engage in it intellectually, anyone can do it safely and productively.”

Drolet keeps in touch with fellow instructors and scientific researchers all over the country, and is part of a community of like-minded instructors and researchers constantly enhancing and improving this approach to exercise – one he is convinced will be the workout of the future. Clients start with an individual assessment, in which Drolet carefully measures their individual needs and abilities. Then, he designs an exercise regimen for each client and begins educating them to engage muscles appropriately through each exercise, all the while patiently and expertly guiding every move.

“One of my clients likes to say, ‘if you do it right, you get to do it less.’ And she’s right,” Drolet says. And in the case of the Strongworks, doing it less means doing it only once or twice a week, yet achieving unprecedented and profound results.