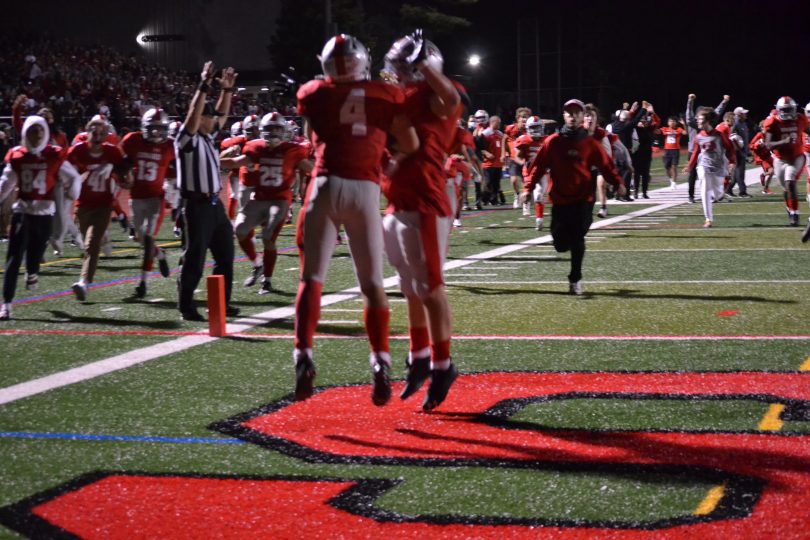 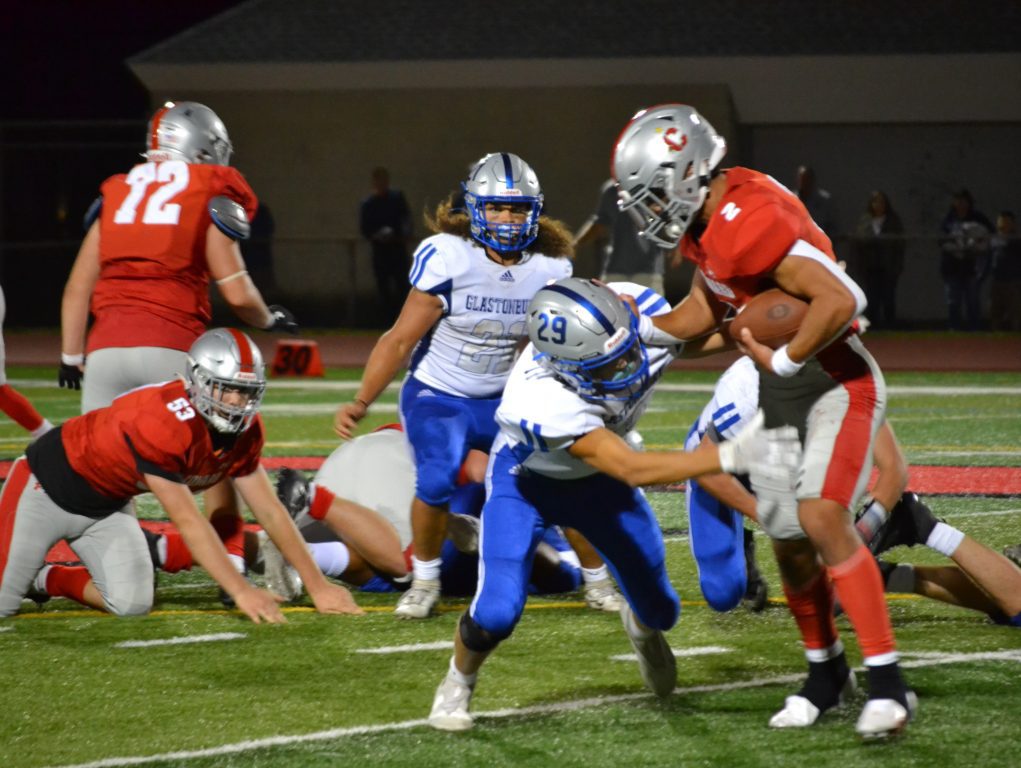 It had been almost 600 days since the Conard football team played a game. With the 2020 season wiped out by COVID, the Chieftains could have been excused for being a little rusty in their season opener against Glastonbury.

The first play of the game saw the Guardians Jayden Sgro take the opening kickoff all the way back for a touchdown and Glastonbury led 7-0 just 13 seconds into the game. It was just the appetizer for what would be a full course meal of exciting football, capped off by a 24-yard TD catch by Jack Kennedy from Israel Lopez. That play on fourth and 24, sent the fans at McKee Stadium into a wild celebration and gave Conard the 41-35 overtime win.

Kennedy, who starred on both sides of the ball all night, gave the credit to his coach and his fellow captain, quarterback Lopez. “It was a great play call. We had hit it all game. Israel? I love that guy,” said the senior. 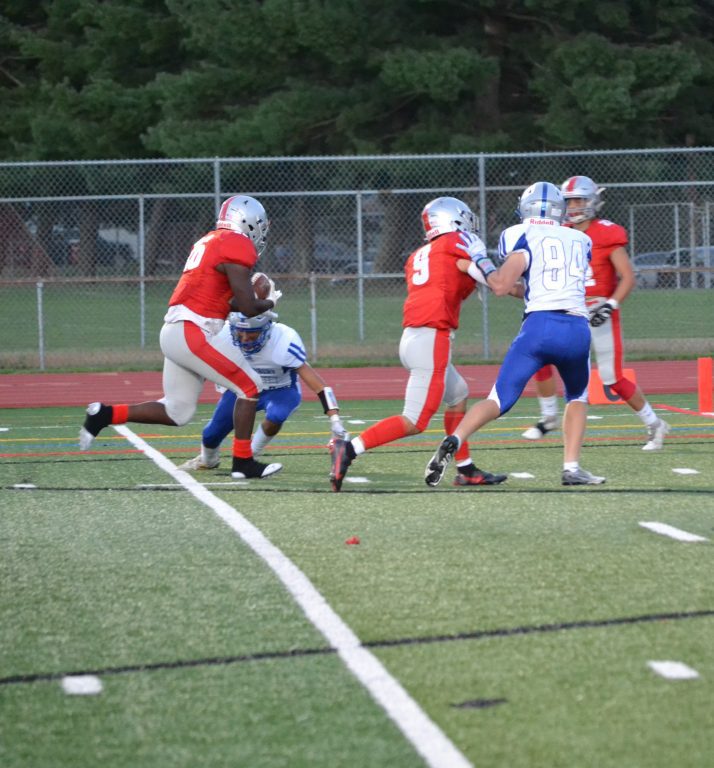 Conard running back Will Ball follows the block of Declan McCann to the end zone. Conard vs. Glastonbury. Sept. 10, 2021. Photo credit: Paul Palmer

Despite giving up the opening score to Glastonbury, head coach Matt Cersosimo said after the game that having a little adversity from the get-go may not have been the worst thing for his club. “It’s how you respond,” said the coach. “In moments of adversity it is how you respond, these kids put [it] on display all night.”

On Conard’s first possession, they were driving deep into Glastonbury territory when Lopez bobbled a snap but recovered it and broke through the line to scamper in for the score with 8:47 to go. 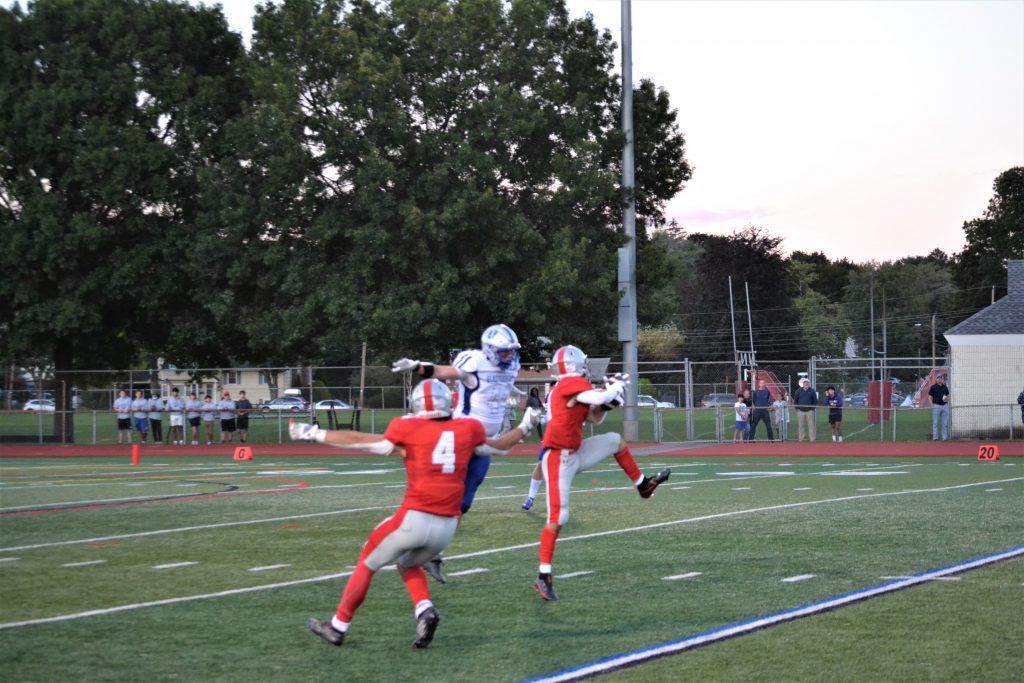 The home team looked to be in position to stop the next Glastonbury drive after a pair of big plays by junior linebacker Dom Gattinella. But on a third and 5, Conard was flagged for roughing the passer, extending the drive. Three plays later quarterback Jack Anglim had his pass tipped by a defender and fall into the waiting arms of his receiver for a 14-7 lead. Conard marched right back down the field and capped a scoring drive when Kevin Kirklin took the shuttle pass from Lopez and raced in for the 9-yard score.

Despite the long layoff for both teams, the opening 10 minutes showed they all came to play.

“What a great team and staff over there,” said Cersosimo of his opponent. Added his co-captain Kennedy,

“It’s been tough waiting. All day I couldn’t focus in school. All we talked about was the game tonight,” Kennedy added. 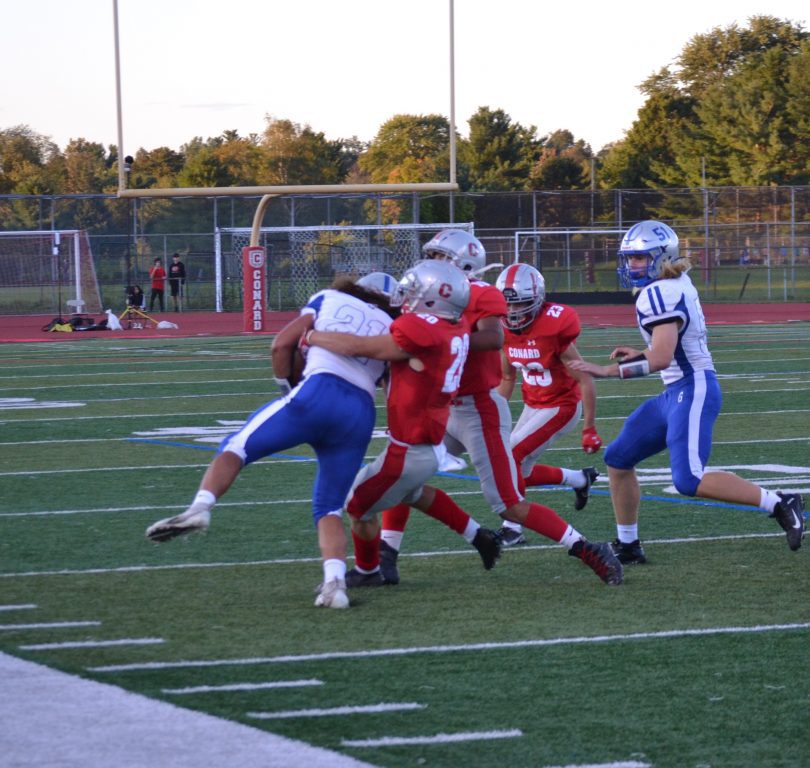 The teams would exchange scores – with Conard running back Will Ball taking screen pass to pay dirt. After holding the Guardians on the next series and forcing a punt it looked like Conard would get a chance to add to the lead. But Conard fumbled the punt return, the ball ended up being recovered on the 40 by Glastonbury. They would drive it in with 3:13 to play in the half to tie it back up at 21.

Conard then fumbled the ensuing kickoff and the visitors scored on a fourth and 8 from the 8 when Danny Bowman hauled in the pass to give Glastonbury the 28-21 lead. 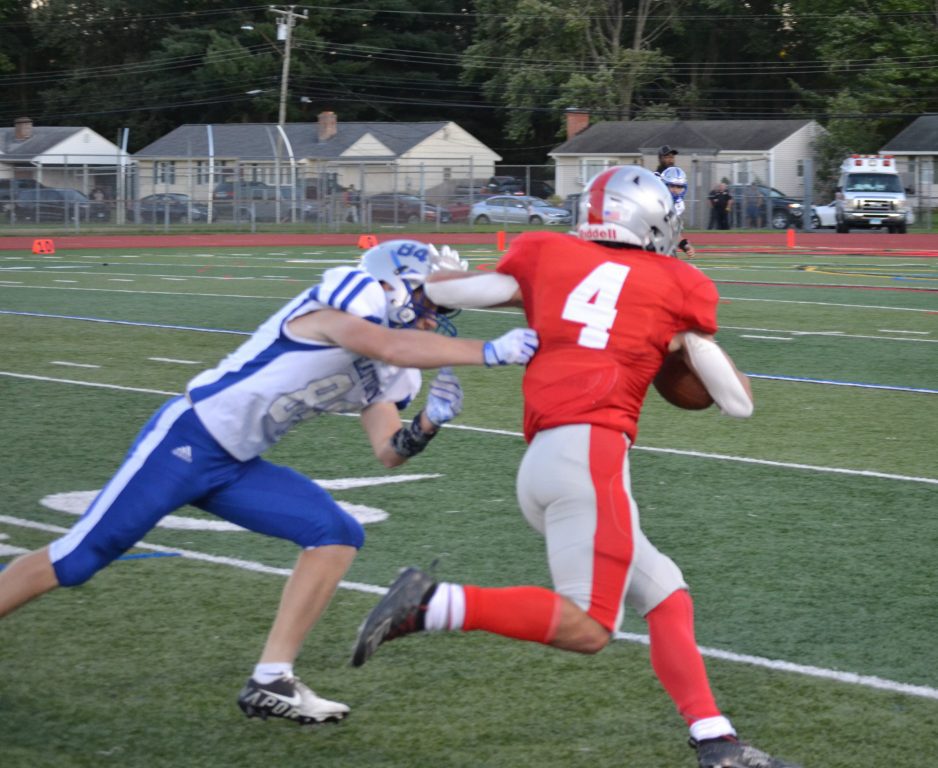 On the next play, Kirklin would take the kickoff back to the Guardians 10-yard line and Conard had 61 seconds to try and tie it up. Lopez was stopped on a fourth and 3 with 10 seconds to go and Glastonbury was content to run out the half with the 7-point lead.

After a scoreless third, Conard mounted a sustained drive, capped off when Lopez found Kennedy in the right side of the end zone. But the ensuing PAT was blocked, and the Chieftains were down 1.

After holding Glastonbury on the next possession and forcing a punt, Conard once again fumbled it, this time the ball was knocked back to and recovered on the 4-yard line, setting up the Guardians to pad their lead. 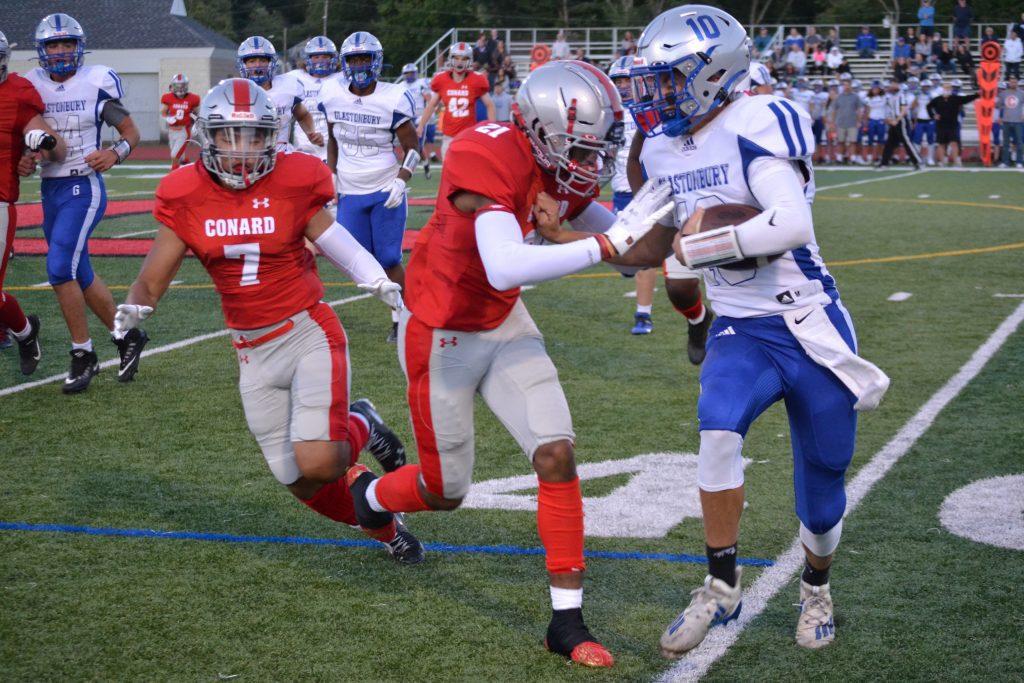 They did just that – but with some controversy involved. Jordyn Sams – who was a workhorse in the backfield for Glastonbury – lost the ball as he went into the end zone. After a conference of the officials, it was ruled he had crossed the line before losing the ball. With the point after, the Guardians now had 35-27 lead.

On the next drive, Lopez would find Will Tousignant for a big gain to keep it alive. And then it was the combination of Lopez to Kennedy that struck again – first for a 25-yard TD hookup, and then on the 2-point conversion to tie it up at 35 with just under 3 minutes to go in regulation.

After a strong defensive stand, highlighted by Evan Belabe’s pass breakup on third down, Glastonbury was forced once again to punt.

Neither team could convert on their final possessions of regulation and the game headed to overtime tied at 35.

Conard won the coin toss and deferred, allowing the visitors the first possession from the 10-yard line. On second down, junior Ryan Bushnell trapped the Glastonbury quarterback and dropped him for a loss back at the 20-yard line. On the next play, Tousignant broke up a pass at the 4-yard line, and Glastonbury opted to try for the field goal and the 3-point lead.  The Conard defense rose-up led by Belabe and blocked the kick.

On the Chieftains’ possession, it was a short run, two offensive penalties and a short gain, and the ball went from the 10 to the 24-yard line. Conard took a time out and when they returned it was Lopez finding Kennedy, who beat his defender cleanly and raced to the front right corner of the end zone and made the game winning catch. 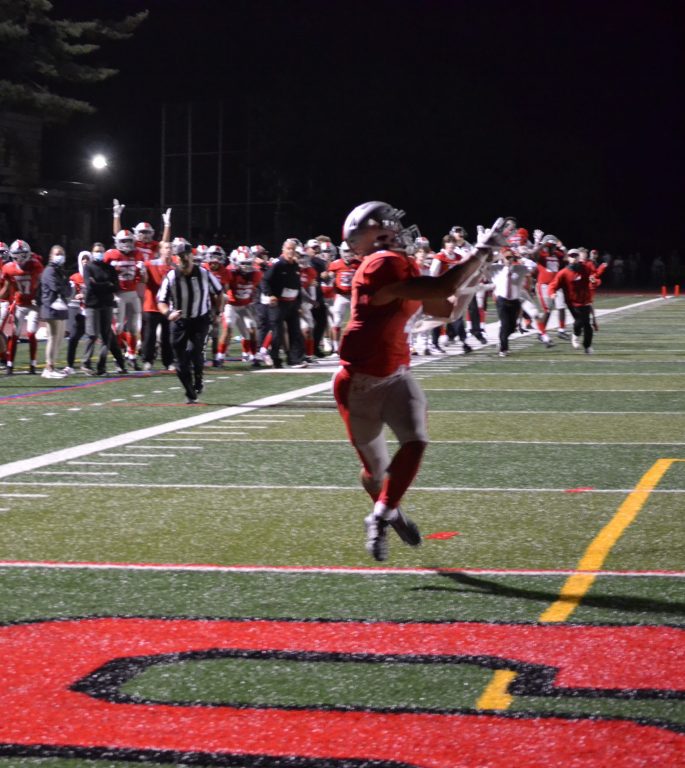 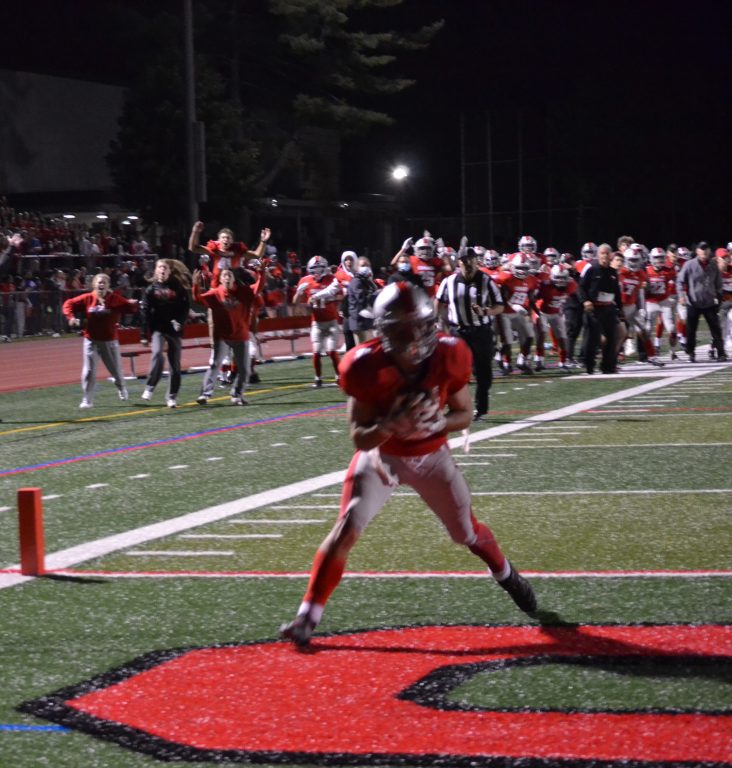 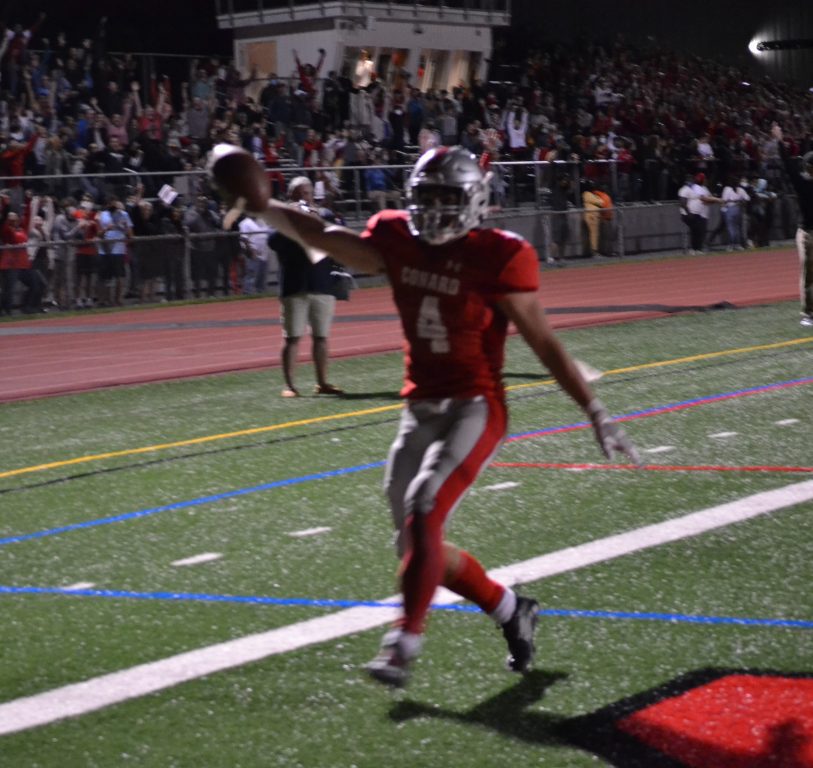 Following the wild celebration, Cersosimo reflected on how his two captains – Lopez and Kennedy – set the example every day for his team.

“Israel never gets too high or too low. When he has chances to make the big plays he does,” he said of his signal caller. “Jack does everything asked of him. They both set the example by how hard they prepare and execute.”

Conard has a few days to enjoy the thrilling win before they travel to meet Maloney on Sept. 17.