Two men and one woman were arrested by West Hartford Police early Monday.

According to a report issued by West Hartford Police, a victim standing in front of 701 Farmington Ave. shortly before 9:30 p.m. on Sunday, August 17, was approached by three suspects, one of whom “brandished a black gun.” The suspect with the gun allegedly “racked a round and demanded the victim’s wallet,” police said, took $70, and ran east on Farmington Avenue.

A short time later and a few blocks away, according to police, two suspects were involved in an armed home invasion on Lowell Road. In that incident, police said, the suspects gained access to a home through an unlocked rear window. According to police, one of the suspects “pointed a handgun at the homeowner and told him to be quiet.” Police report that the suspects remained in the home for half an hour, and also threatened the homeowner with a knife before fleeing with an unspecified amount of cash.

The third incident in the area was reported at 1:29 a.m. on Monday, August 18. Police said a woman reported that she was smoking a cigarette while standing outside her home on Fennway Road when she was approached by a suspect with a gun. The woman ran into her home and called 911.

Police responded to the Fennway Road incident and a K9 tracked a suspect hiding in the bushes on nearby S. Highland Street and captured him when he attempted to flee. According to police, that suspect was also found to be in possession of heroin. A second suspect was found hiding nearby and taken into custody, police said.

According to police, they believe that all three incidents were related and that a home invasion was planned for the Fennway Road home but was “thwarted by the alert homeowner.”

Police report that a third suspect was located at a residence in Hartford and she was taken into custody. According to police, three facsimile handguns as well as property taken during the robberies were recovered.

The suspects arrested and charged by West Hartford Police are Jaquarius Carter, 19, of Hartford; Terrance Clarke, 18, of Bloomfield; and Ashley Blagrove, 21, of Hartford.

All three suspects were charged with first-degree robbery, second-degree larceny, carrying dangerous weapons, and two counts of conspiracy in conjunction with the armed robbery on Farmington Avenue. Carter was also charged with brandishing a facsimile firearm. 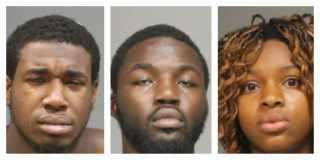