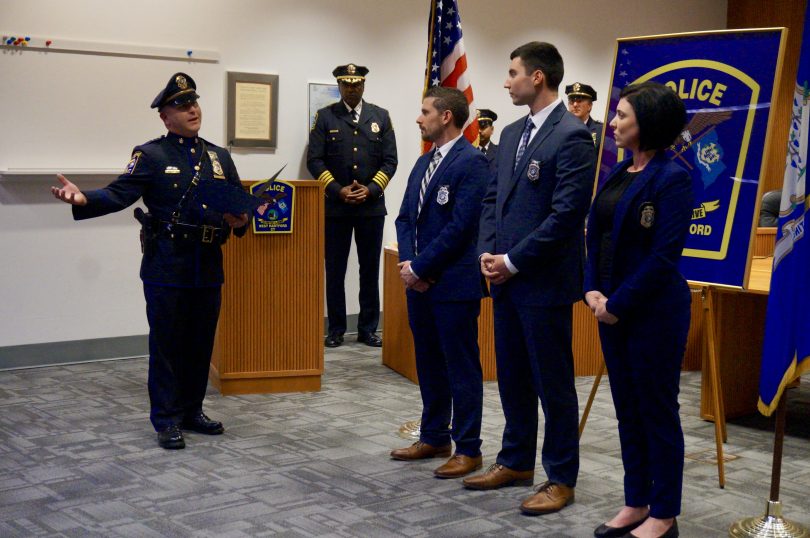 Lt. Eric Rocheleau gives each of the new officers a copy of their oath and a Miranda rights card. From left: Eric Rocheleau, Off. Timothy Reardon, Off. Jack Sanford, Off. Stephanie Hannigan. Photo credit: Ronni Newton 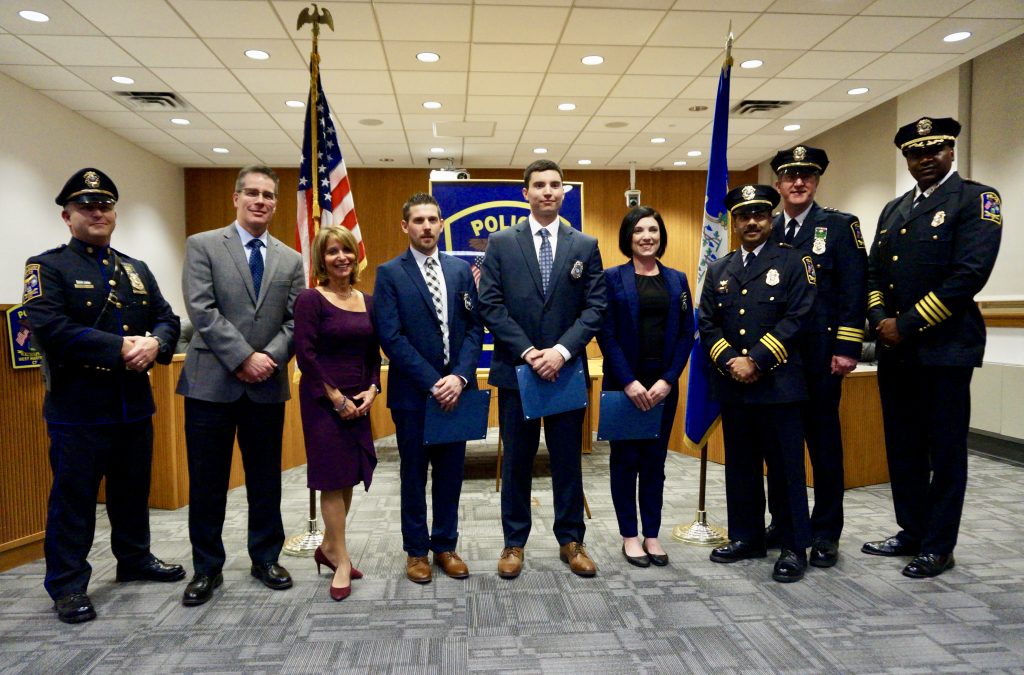 Three new officers began their employment with the West Hartford Police Department on Dec. 30, and were officially sworn in Tuesday night by Mayor Shari Cantor at a ceremony at Town Hall attended by their family and friends as well as other members of the police department and town officials.

Officers Timothy Reardon, Jack Sanford, and Stephanie Hannigan will begin training at the police academy in Meriden this Friday.

Chief Vernon Riddick noted at the ceremony that with the hiring of the three newest officers, the West Hartford Police Department now has only two vacancies, down from 15 when he took over as chief 18 months ago. He expressed his thanks to Cantor and Town Manager Matt Hart for supporting efforts to bring the department to full capacity.

Six recently-hired officers are currently enrolled in training at the police academy, were given special permission to  attend Tuesday’s ceremony.

Off. Reardon grew up in Oakville, CT, and is a 2005 graduate of Watertown High School. He attended UConn and Western Connecticut State University, and most recently worked as a warehouse operations manager for Freshpoint.

Off. Sanford grew up in Coventry, CT, where he still resides. He is a 2015 graduate of East Catholic High School in Manchester and a 2019 graduate of Endicott College with a degree in criminal justice.

Sanford was most recently employed by the Town of Windsor Public Works Department as a seasonal maintainer, and previously completed criminal justice internships with the Gloucester (MA) Police Department, Connecticut State Police Troop D, and the Coventry (CT) Police Department.

Off. Hannigan grew up in Southbury, CT, is a 2007 graduate of Pomperaug High School (Region 15), and is currently a resident of Burlington.

In 2009 she began a career in the banking industry, ultimately becoming an anti-money laundering analyst and was most recently a financial intelligence analyst with Webster Bank.

In 2017, she was awarded the Connecticut Chapter of the International Association of Financial Crimes Investigators “Financial Crime Investigator of the Year” award for “exceptional investigative work in a joint FBI and United States Postal Inspection Service investigation that found an individual had defrauded victims of more than $1 million dollars.”

“We are truly appreciative of your decision to choose West Hartford,” Riddick told the new officers. 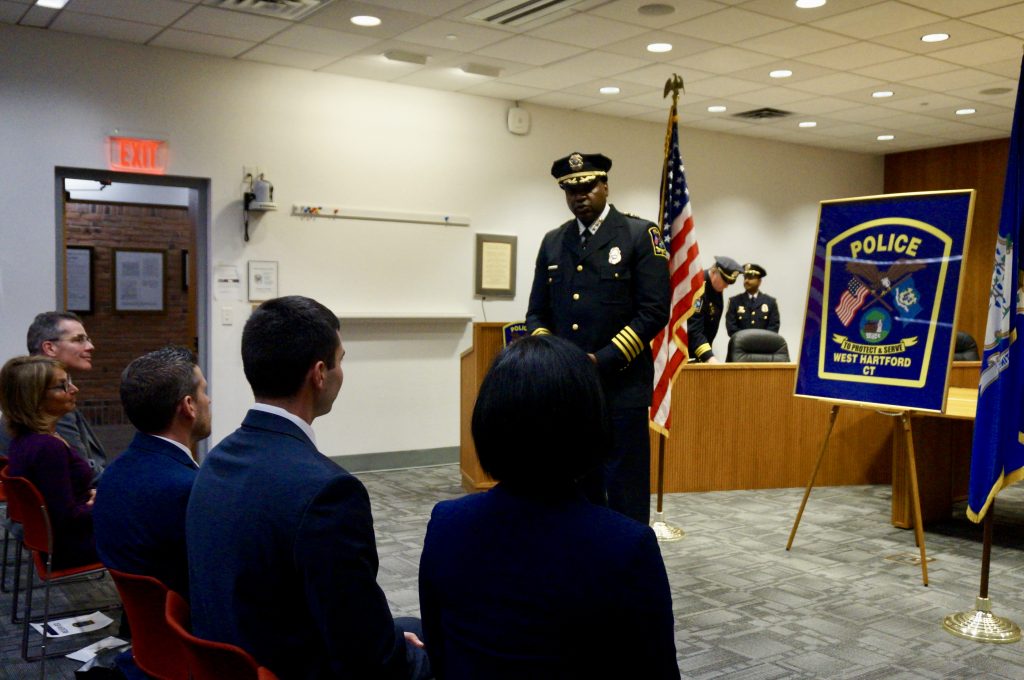 Becoming a police officer is not a decision that is taken lightly, Riddick said. “When we take this job we don’t take it to utilize our weapon but if we have to we shall, if we have to we must, if we have to we will,” he said, noting the recent officer-involved shooting in Ansonia for which he also asked for a moment of silence.

Riddick said all hope and pray never to be put in that situation, but if it happens, “you will be properly trained to make the right decision” for your safety and the public’s safety.

“Do not tarnish this badge,” he added.

Riddick also thanked the families of the new officers for their support.

While the West Hartford Police Department is close to full capacity now, Riddick noted that about 25 members will become eligible for retirement in the next 12-15 months, and the new officers will gain seniority quickly.

Hart also extended a welcome to the new recruits, praising the department and its leadership team. “Public safety is one of our priorities, something that West Hartford has long taken great pride in,” he said. “It’s one of our community values.”

While this is a challenging time to entire public safety, it’s never been more important, Hart said. “We need you,” he said, and wished the recruits success in the academy.

Lt. Eric Rocheleau, who heads the department’s Training Division, served as emcee of the swearing in ceremony. He oversees 12-week Field Training Officer program that all new officers will complete following graduation from the academy, before they assume duties on their own.

Rocheleau gave each new officer a copy of their oath, which incorporates the department’s mission statement, and a Miranda rights card. A key part of service in West Hartford, he said, is “treating all other with fairness and respect.” 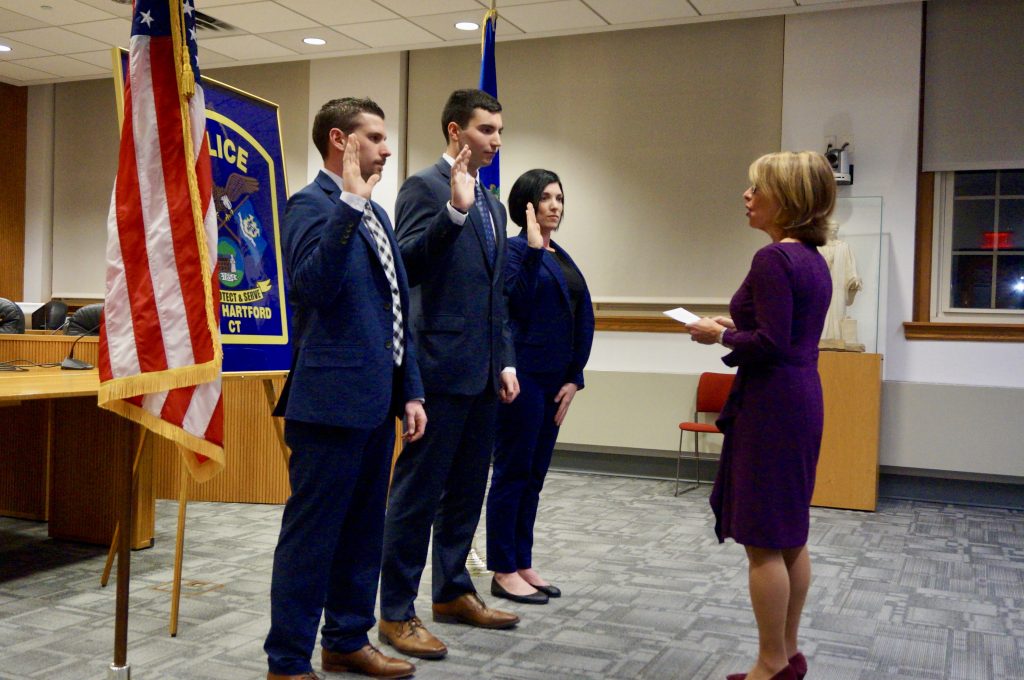 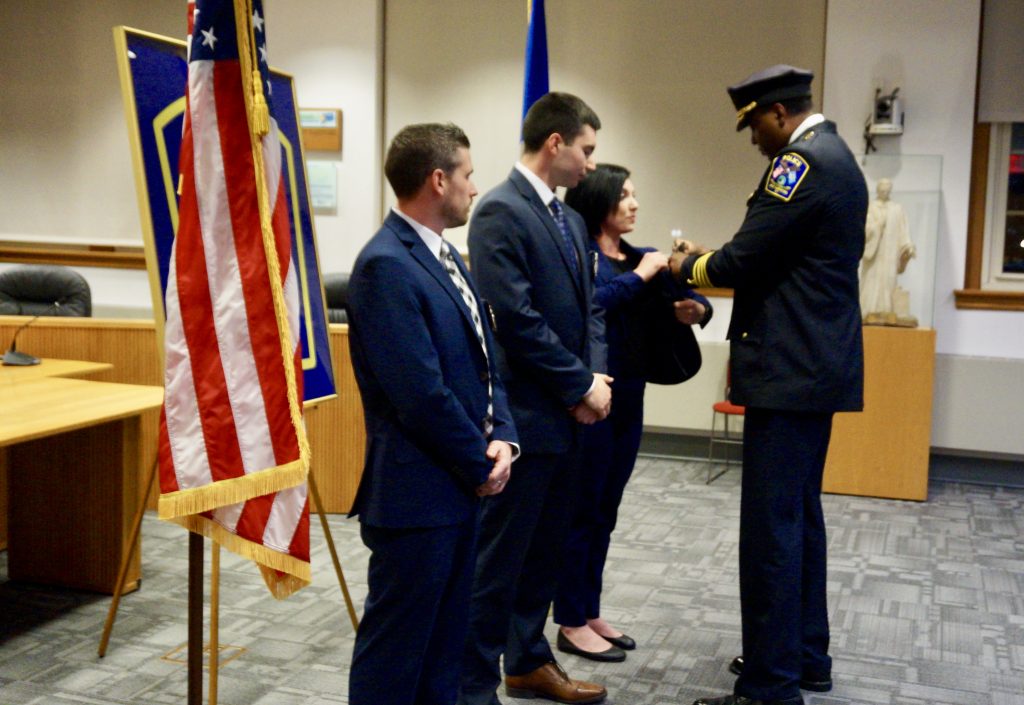 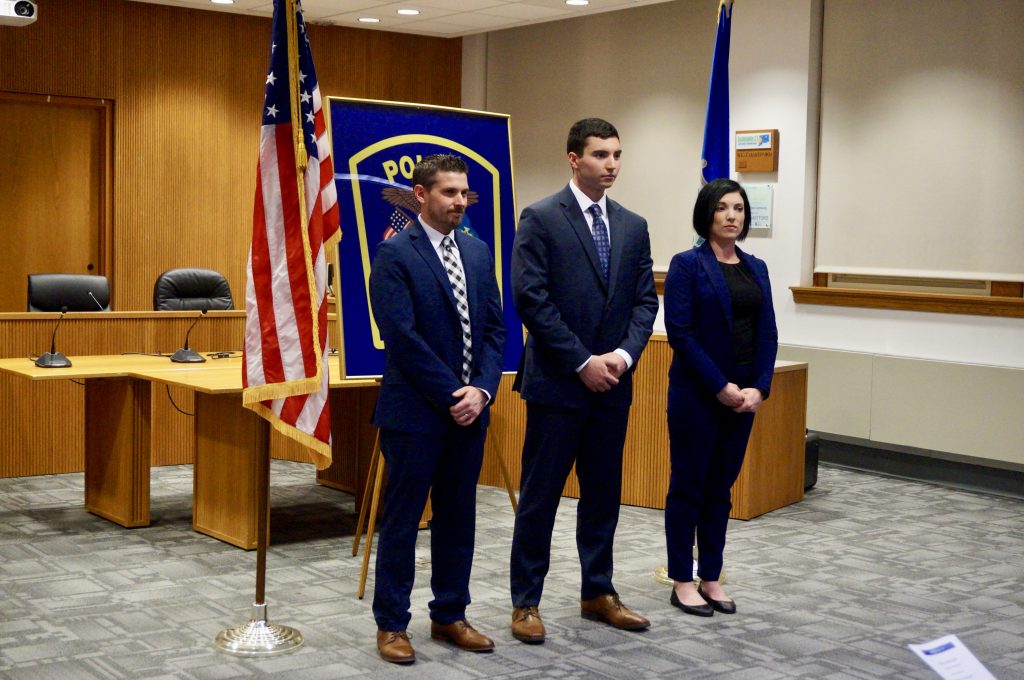 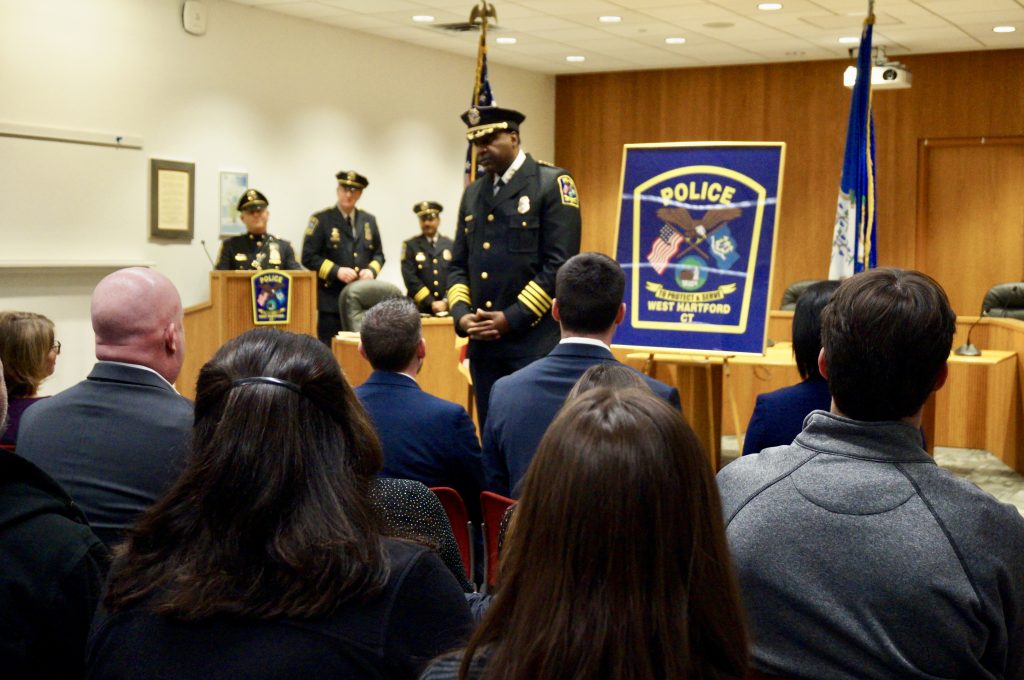 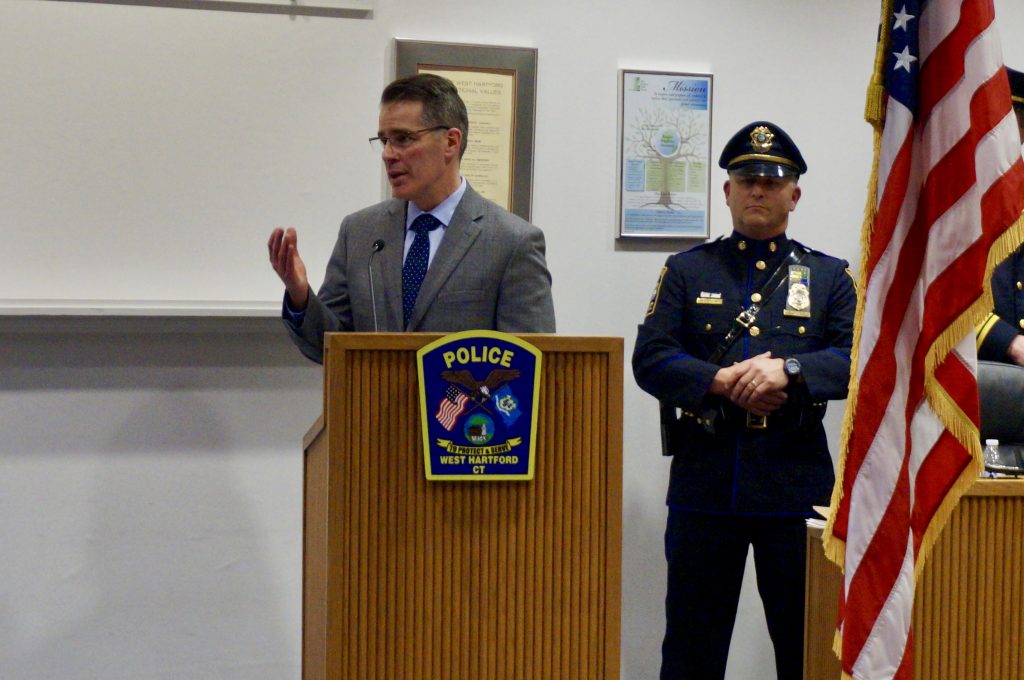 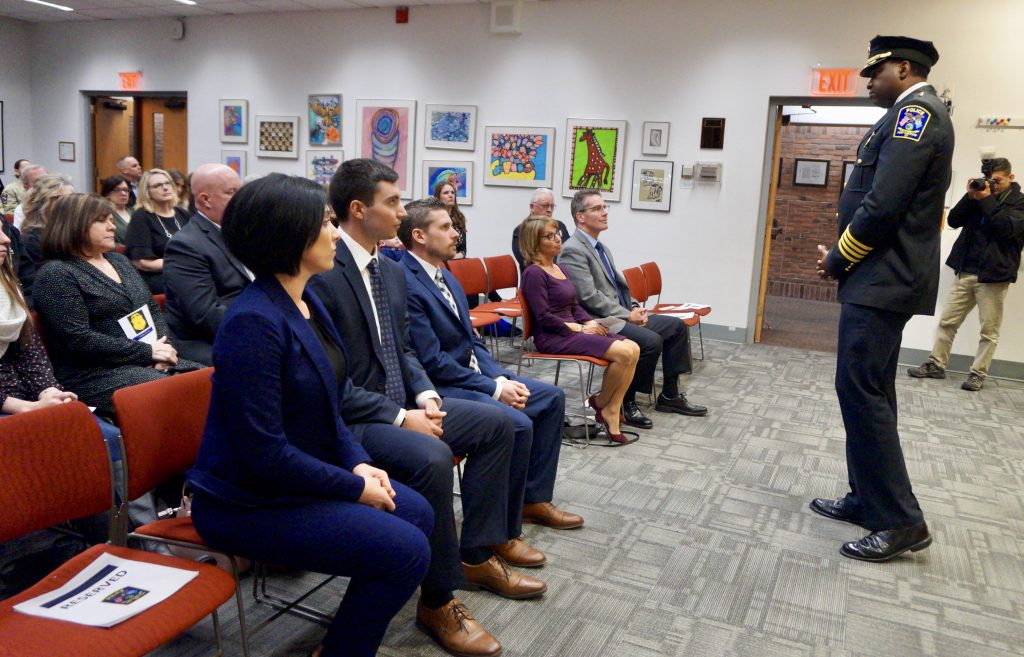 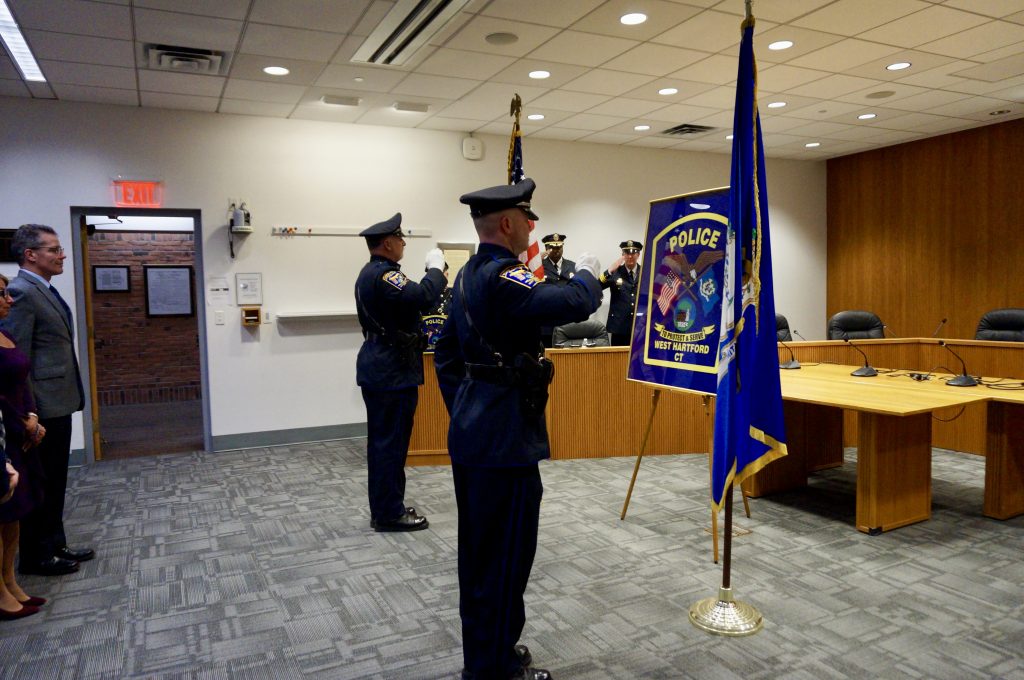