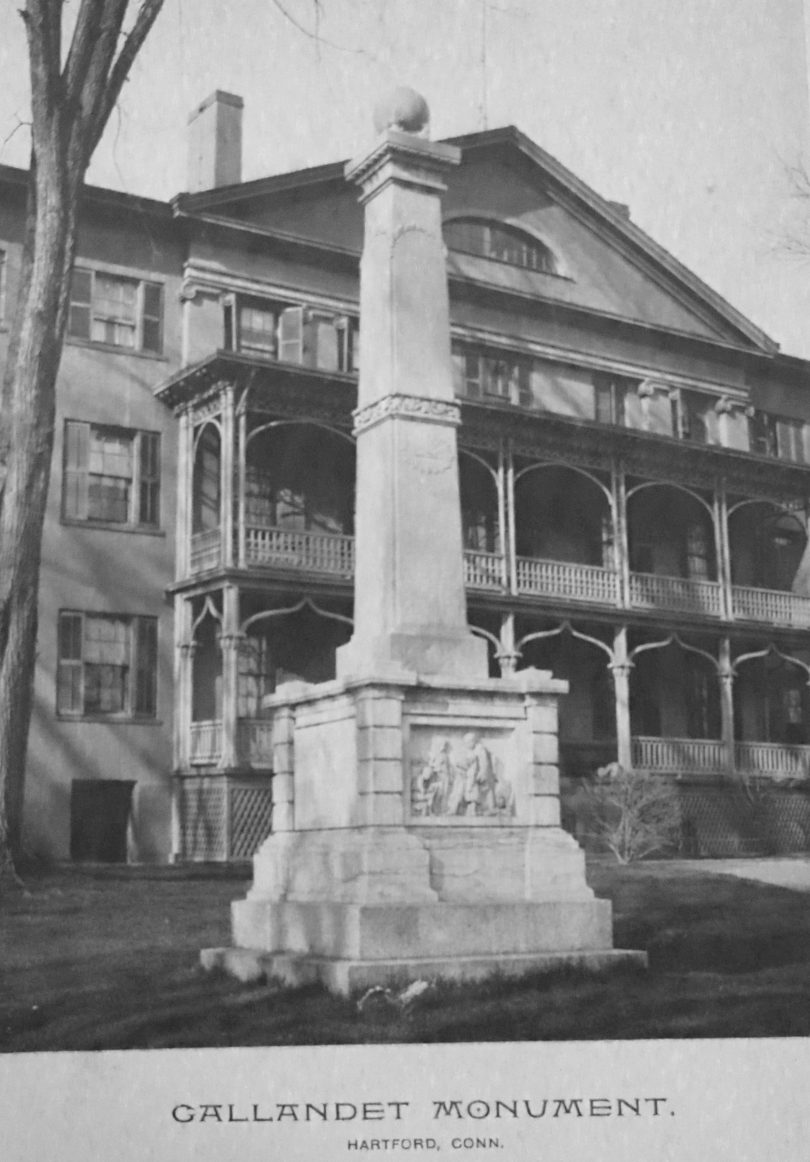 Original Gallaudet monument constructed in 1854. Courtesy of American School for the Deaf

The West Hartford Town Council unanimously approved an application by the American School for the Deaf to place a restored version of the Gallaudet Monument on the lawn in front of the school. 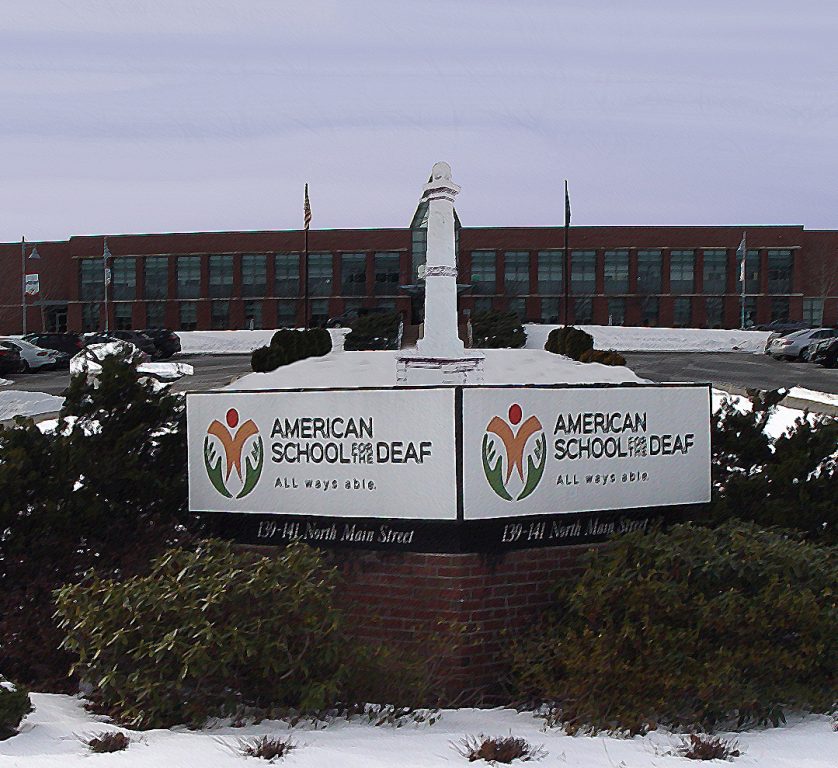 Rendering of restored monument in place on ASD campus. Courtesy of John Stewart

By Asaad Hicks and Ronni Newton

A historic monument honoring Thomas H. Gallaudet is being restored, and will soon be reconstructed and installed on the front lawn of the American School for the Deaf’s North Main Street campus in West Hartford, following unanimous approval and enthusiastic support by the West Hartford Town Council last week. 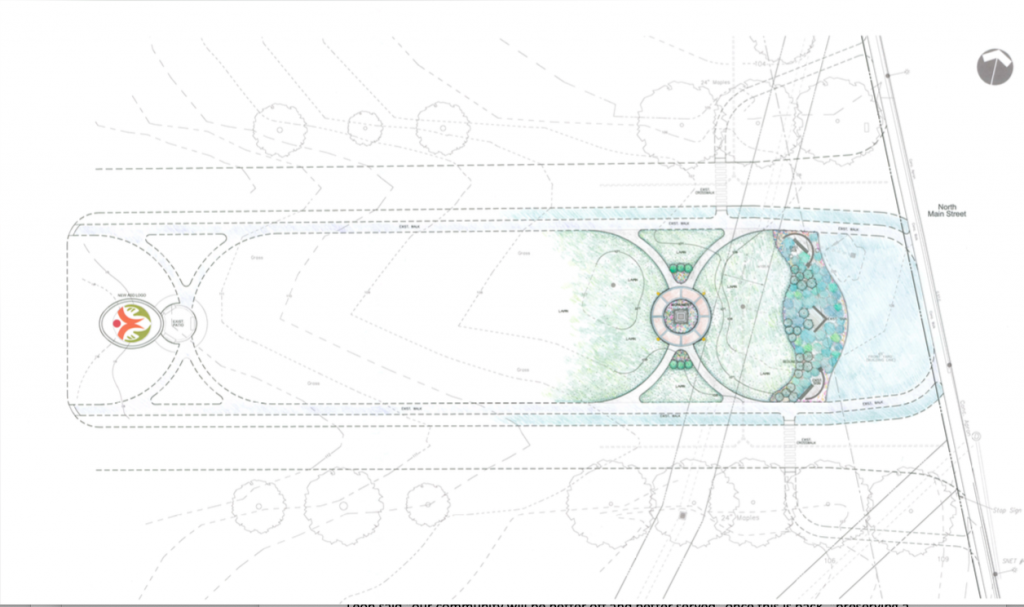 Site plan indicating where the Thomas H. Gallaudet monument will appear on the ASD campus, 137-139 North Main St. Courtesy of American School for the Deaf

Gallaudet was co-founder and first principal of the American School for the Deaf, which was originally located in Hartford and is the oldest continuously operating school for the deaf and the birthplace of American Sign Language. When ASD moved to West Hartford about 100 years ago, the monument, already in disrepair, was not installed on the new campus and has been in storage for nearly a century.

Landscaping work and subtle site lighting will also be part of the project, which has been two years in the planning.

ASD Executive Director Jeff Bravin, who is deaf and spoke through an interpreter, gave an initiial presentation of the plans to the Council at a hearing that preceded the Feb. 11 meeting.

Bravin noted that ASD had been engaged in a fundraising campaign to restore its iconic cupola, which was removed by a crane and saved when the old Gallaudet building was torn down in 2015. The institution eventually realized, however, that the cost to restore the cupola and relocate it would be exorbitant, and with the support of alumni and donors, turned the focus of the fundraising campaign to the renovation of the Gallaudet monument.

“We realized we already had a beautiful monument that had been damaged and immediately made the decision to talk to our alumni … to donate it to renovate the [Gallaudet] monument, which we believe had more significance to the school,” Bravin explained. “We really feel that this is very critical to showcase the monument in front of the school and show a true connection to the community,” he told the Council.

Others who are involved with the project also addressed the Council, and provide more details about the stately monument’s history and the restoration efforts.

“The Gallaudet monument is one of the most fascinating monuments I’ve ever encountered,” said Francis Miller of Conserve Art, who has been restoring outdoor monuments for 30 years. “Reverend Gallaudet is just a treasure for our nation,” he added.

Carlin’s relief sculptures show Gallaudet in a seated position, rather than standing, which was a “remarkable break in tradition for art history,” Miller said.

According to Miller, the design later served as the basis for a statue of Gallaudet that stands at Gallaudet University in Washington, DC, and was sculpted by Daniel Chester French, the same artist who created the statue of Abraham Lincoln sitting inside the Lincoln Memorial.

Miller said that by 1874 the monument was already noted to be in disrepair. Due to the changeable New England weather, the statue could not hold up which caused the marble to wear down and shatter, with visible cracking and fracturing he said. When ASD began its relocation to West Hartford in 1919, the monument was ultimately dismantled, placed in storage in a barn in West Hartford, and then later stored on the ASD campus.

Chips – fragments broken off the original monument – were sold to raise money to go towards a new monument, a bronze statue of Gallaudet.

Some detail of restoration plans. Courtesy of American School for the Deaf

While the historical monument is in disrepair, enough of it remains so that the missing or damaged portions can be recreated. According to a synopsis of the restoration plans, the process, which will be conducted in accordance with U.S. Department of the Interior standards, will include “cleaning, stain removal, stone consolidation, crack injections, fills, and patching losses. A mold will be made of the front relief sculpture to cast an exact copy of the original in bronze. Based on the existing fragment, a full model of the back relief sculpture will be made using artists from the deaf community and also cast in bronze.”

John Stewart of CR3 Studios is the leading architect for the Gallaudet renovation project, and told the Council that the plan is to situate the monument about 125 feet back from North Main Street, and it will be in line with the Gallaudet-Clerc Education Center building, elevated and accessible to the public, surrounded by seasonal plantings.

“We are going to attempt to pull as many of the elements from the original design as possible,” Stewart said. “The DRAC [Design Review Advisory Committee] and Historical Commission both were enthusiastic with unanimous approval and we believe the Council will have similar views.”

Before Council members even asked questions, Stewart – who was commended by Deputy Mayor Leon Davidoff for being so detailed – also ticked off items one-by-one confirming how the proposal meets all of the town’s zoning requirements, is in harmony with existing structures, and should not have an adverse effect on adjacent properties.

The application was met with unanimous praise and approval from Council members.

Mayor Shari Cantor, who expressed her enthusiasm for the project, suggested also creating a plaque or some type of visual aid on the ASD website so the community can understand and appreciate the the historical significance of the monument.

Miller noted that the PowerPoint presentation provided to the Council will be expanded, and published on the ASD website.

Bravin added that as the work is done, a time lapse video of the reconstruction will be created using a GoPro camera, and that will be posted online and serve as a good visual aid for people to appreciate the process. Bravin also noted that a booklet will be created so the community will be able to learn more about the history and appreciate the prestigious monument.

Minority Leader Lee Gold said the restored monument will be an “elegant solution to that area … and a great keynote to the campus. It celebrates our history and brings us into the future.”

Davidoff said erecting the monument will be an asset to the community, “preserving a piece of history that has long been neglected.”

Reconstruction will be completed by the end of the summer, before school resumes for the fall 2020 semester. Most of the work will be done inside the school, and not visible to the public.

The restored monument will be unveiled at ASD’s homecoming weekend on Oct. 24, 2020, Bravin said.