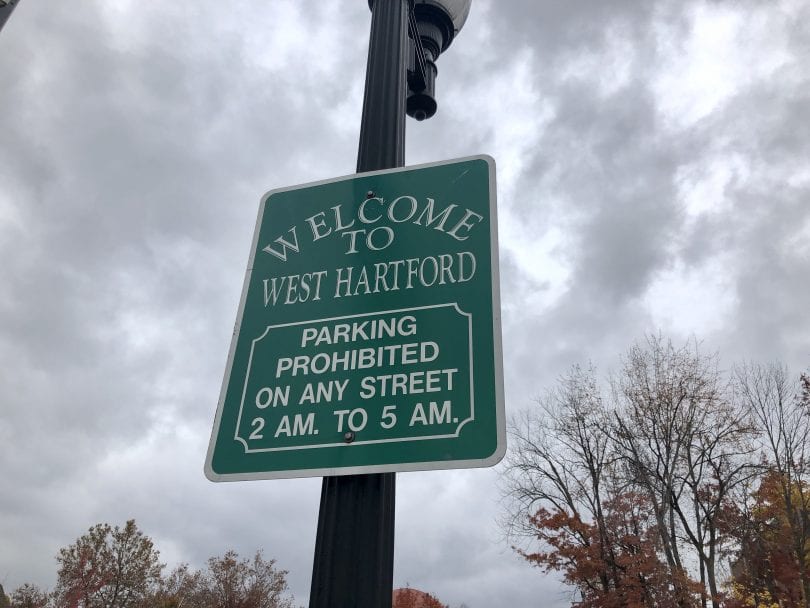 The Town of West Hartford will prohibit on-street parking between 2 a.m. and 5 a.m. effective Feb. 1, 2022, unless an omit is obtained through the town’s website.

The Town of West Hartford’s overnight parking ban, which has been suspended intermittently since the pandemic began in March 2020, will be reinstated as of Feb. 1, 2022, Town Manager Matt Hart said Tuesday.

The town’s online “Parking Omit” system will also be reactivated, and vehicles will only be permitted to park on town roadways between the hours of 2 a.m. and 5 a.m. under special circumstances – such as when a driveway or parking area is temporarily inaccessible or if there are no available spaces in a driveway or parking area for overnight guests – and only if the vehicle’s make, model, and plate number are registered through the omit system, which can be accessed here.

Beginning Feb. 1, “police will start with issuing warnings to re-educate the community regarding the ban,” Hart said.

The town’s overnight on-street parking ban had been temporarily suspended when the pandemic first hit to accommodate the sudden influx of college students returning and other family members living as well as working at home. The town manager was able to do that due to the state of emergency.

It was reinstated during the winter months of 2020 and 2021, and has remained suspended since April 1, 2021, while the Town Council determined whether or not to consider a permanent change to the overnight parking ordinance. Several options for a new ordinance have been discussed at the committee level, but have not been brought to the full Council for a vote.

While there were few complaints when the ban was first suspended, Hart said during a meeting of the Council’s Public Works, Facilities and Sustainability Committee on Jan. 6 that the situation has changed with more and more vehicles being left on the street.

“More recently we have received some complaints,” Hart said, with concerns including litter and late night disturbances. “Of more concern for us is some of the people struggling with their trash collection,” he said, because of vehicles parked in front of homes.

Although when there is a major weather event forecast there is a complete on-street parking ban put into effect, there are other occasions when Public Works needs to treat the roadways and crews have expressed concern about accessibility due to cars left on the street. Public Works Director John Phillips said as people have gotten more accustomed to the suspension of the ban, crews have reported issues due to vehicles parked on the roadways during the three events thus far this year when roads needed to be treated for ice. There have also been conflicts related to construction projects.

Phillips said compliance with the parking ban due to last Friday’s snowfall was also a problem. “Public Works observed street parking in several neighborhoods throughout town,” Phillips told We-Ha.com. “Some streets had several clusters of cars parked overnight making it difficult to plow.”

The town manager, as the traffic authority for the town, is able to reinstate the ban, and he said the announcement is being made now in advance of the Feb. 1 date in order to give residents time to make arrangements for their vehicles.

“However, we are still sensitive to the reason why we proposed this ordinance in the first place,” Hart said at the Jan. 6 committee meeting. That includes the need to provide adequate parking for residents who live in larger apartment complexes, condominiums, and other housing that might lack adequate onsite parking.

Once the overnight ban goes back into effect, town staff will be reaching out to owners of larger complexes and the heads of condominium associations, most of which are older properties in the eastern part of town that were built pre-zoning, and some pre-automobile “to try to get a better idea of how many people would be challenged by this and based on the number, if we think it is a sufficient number, we could develop a very limited parking program where residents, and residents only could obtain a permit to park overnight. They could only get the permit based on a determination of need,” Hart said.

The town has purchased and will be deploying new software for other parking-related purposes, Phillips said, and it can be used to create a residential parking permit portal. The system would be based on the license plate and police would have access to the information, so no sticker would be required.

“We are confident using the system we are going to deploy,” Phillips said, and could have a plan in place for a pilot by late spring. The initial trial will perhaps be for 100-200 permits, depending on demonstrated need.

Establishing a permit system would require approval by the Town Council, Hart said, and staff will bring a proposal back to the Public Works, Facilities and Sustainability Committee this spring.

Hart said West Hartford has had a restriction on overnight parking on the books since 1957. The ordinance originally prohibited parking on the street for more than three hours between midnight and 6 a.m., and the Town Council codified the 2 a.m. until 5 a.m. on-street parking prohibition on July 13, 1993. Discussions about changing the ban permanently have come up intermittently, but have not been been enacted.