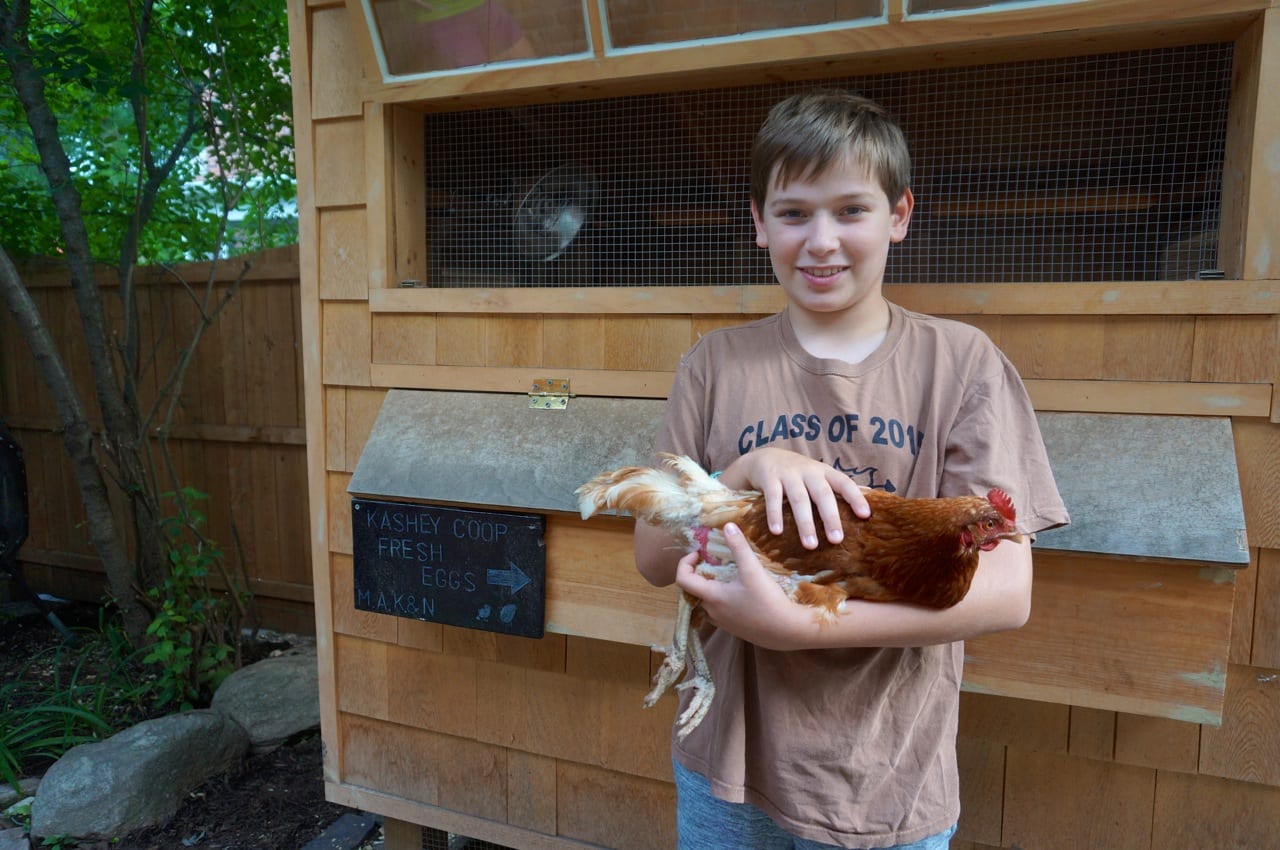 One West Hartford family has been told that they need to get rid of their six hens, but they are petitioning to save their pets, and have reignited the town’s discussion of an ordinance relating to chickens. 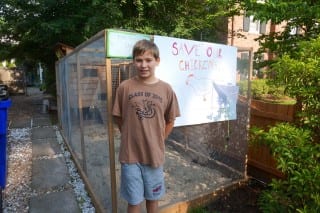 Kai Kashey stands in front of the chicken coop and run that his father, Nick Kashey, built. He made the poster on which there is a petition that had more than 120 signatures as of Tuesday morning. Photo credit: Ronni Newton

Asha Appel and her family didn’t set out to break any laws or deceive their neighbors or anyone else in West Hartford when they purchased six chickens last August and built a coop and run in the side yard of their Birch Road home.

“We thought we did the right thing,” Appel said.

The family lives near Elizabeth Park, at the corner of Birch Road and Walbridge. The coop is clearly visible from Walbridge, and neighbors of all ages often stop by to visit the chickens and bring them treats. The chickens have visited Whiting Lane School, and have been photographed in local papers. “We’re not trying to hide them,” said Appel.

“My son is a 4-H kid. He learned a whole lot about chickens at farm camp,” Appel said. Her 10-year-old son, Kai Kashey, isn’t really into sports but he loves animals and has been attending 4-H at Westmoor Park every week and is even attending a summer camp at Flamig Farm in Simsbury, Appel said.

Appel wanted to encourage her son’s passion, and also thought that owning chickens would be educational, teach him responsibility, and of course have the great benefit of fresh eggs.

“He just loves farm animals and all animals. We just thought it would be good,” Appel said.

Before she ordered the chickens, Appel called the Town of West Hartford. She didn’t recall who she spoke to, but said she thought it was someone in public works. “When we spoke to the town they said it was neither legal nor illegal,” Appel said. She said she was told that as long as her neighbors were okay with the chickens, it wasn’t a problem.

The neighbors were supportive, so Appel ordered six hens – three Buff Oringtons and three Red Stars, specifically chosing breeds that were known to be quiet. Her husband – a physician who runs several clinics in Springfield – built what Appel calls the “Four Seasons of chicken coops” from scratch. It took him weeks to construct, and he’s already done some renovation to increase the size of the attached run.

The chickens are Kai’s pets. “Queen Bee is the nicest, largest, and prettiest,” Kai said of one of the Buff Oringtons. “Moldy Butt” is at the bottom of the pecking order.

“You get fresh eggs every morning. They’re great pets. They don’t bark when someone comes to the door, and they only make sounds in the morning,” Kai said.

In mid-June the family received a letter from West Hartford, informing them that they needed to get rid of the chickens because they aren’t permitted. “They’re saying that if it’s not specifically identified [as a permissive use] it’s illegal under ordinance 177-B,” Appel said.

She disagrees, since the ordinance says nothing about other animals either, like cats or dogs. It doesn’t even say that a vegetable garden is permitted. “They’re trying to set a standard, but it’s really hard to do without a law.”

Appel said that she knows of many other West Hartford families – probably at least 50 – who have “stealth” chickens.

Town Planner Todd Dumais confirmed that the interpretation of the existing ordinance is that if it’s not a permitted use, it’s prohibited. “No raising of chickens or poultry is permitted with the exception of farm use,” he said.

Dumais said he doesn’t know how many West Hartford families have chickens. “There are probably people in West Hartford who have bees, or unlicensed dogs. It doesn’t mean that they’re allowed,” he said. When violations of zoning ordinances are discovered, action needs to be taken, he said.

Last year the Planning and Zoning Department learned that a West Hartford resident was keeping 300 racing pigeons on his property, Dumais said. The pigeons, following a hearing with the Zoning Board of Appeals, had to be relocated.

Deputy Corporation Council Patrick Alair said that he had done some work on a chicken ordinance in 2013, but there hasn’t been any discussion about it for a long time. “It sort of fell off the Council’s agenda and never came back,” he said.

“One of the dilemmas was that we didn’t want a chicken ordinance that would only allow people on the mountain [where yards are generally larger] to have chickens,” said Alair.

“We on the Council have been aware that there is interest in developing an ordinance that addresses the interest some residents have in having chickens,” Council member Burke Doar said. It had been discussed in the past, but “fell off the radar,” he said.

Doar has spoken with Appel, who lives in his neighborhood, and said he hopes to work with fellow Council members of both parties to address the chicken issue.

Although Doar said there are a lot of factors to consider and it’s important to be repectful of neighbors, he is optimistic that a good solution can be reached. “I’ve been very impressed with [the Council’s] ability to draft an ordinance with  the support and input of the community,” Doar said.

Dumais said it’s tough to compare West Hartford, with its combination of urban/suburban and quasi-rural areas to other communities, but he is aware that a variety of other towns in the state permit chickens (usually just hens), some requiring permits, and most subject to a variety of restrictions including number of birds and distance from neighbors. Those towns include Farmington, Glastonbury, New Haven, Simsbury, Fairfield, and Hamden.

Both Dumais and Alair said that West Hartford would look to the experience of other towns for best practices if asked to craft an ordinance for West Hartford.

“My hope is that the town makes a chicken ordinance,” said Appel. “I see this as an opportunity,” she said, and would be willing to make any changes needed, including putting up a new fence in order to keep her son’s pets. They have a back-up plan for relocating the hens, but she hopes they don’t have to use it.

The Appel/Kashey case will be heard before the Zoning Board of Appeals on July 15, and they hope to have even more names on the petition before then. In four days, 120 people had alerady signed.

“If you can keep your dog, why can’t we keep our chickens? They’re both pets, and we love them,” Kai said. 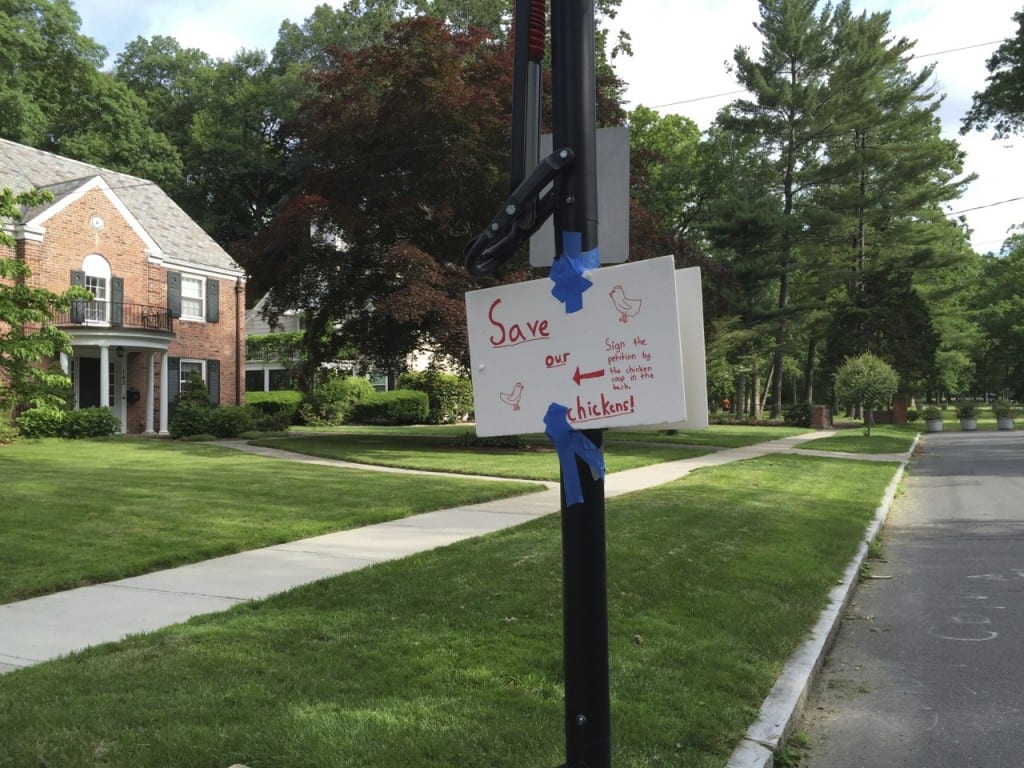 A sign on Walbridge, near the pedestrian entrance to Elizabeth Park, directs people to sign the petition to save Kai Kashey’s chickens. Photo credit: Ronni Newton 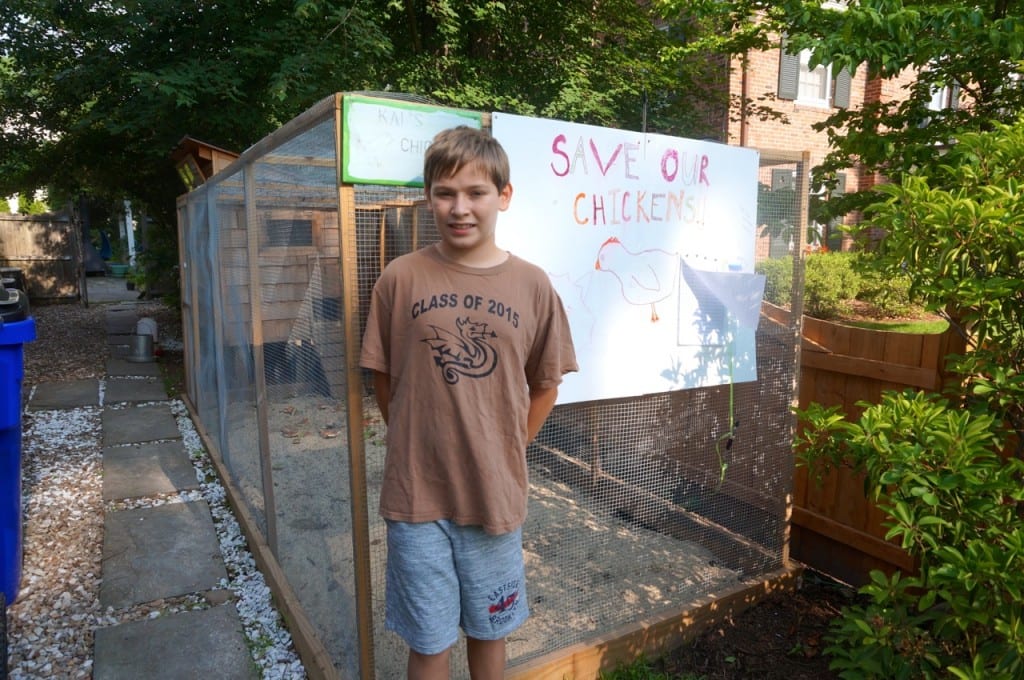 Kai Kashey stands in front of the chicken coop and run that his father, Nick Kashey, built. He made the poster on which there is a petition that had more than 120 signatures as of Tuesday morning. Photo credit: Ronni Newton 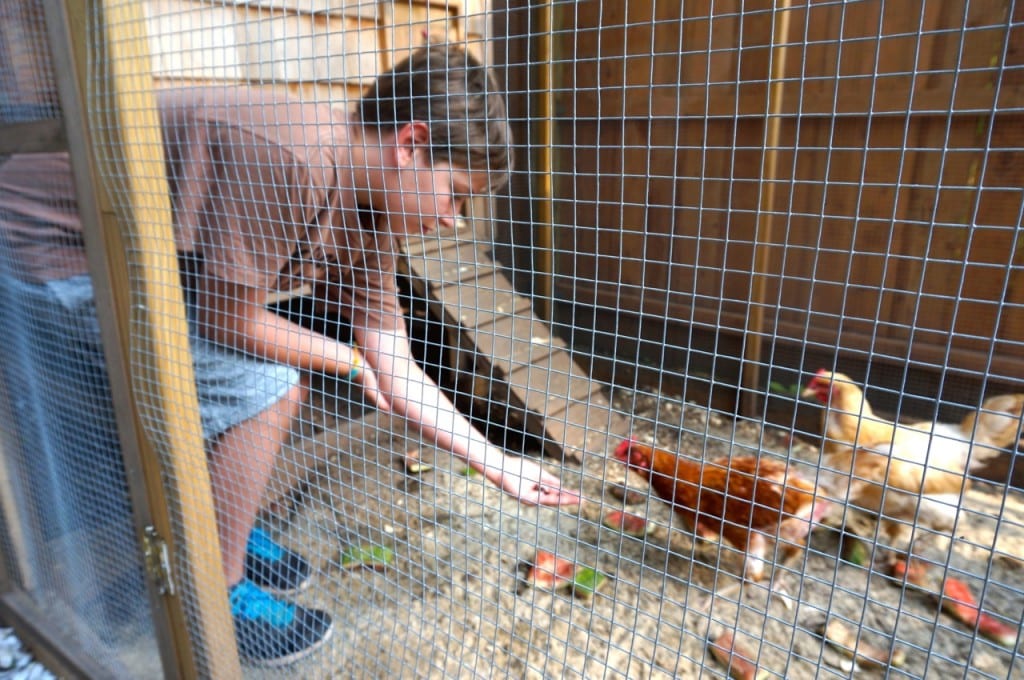 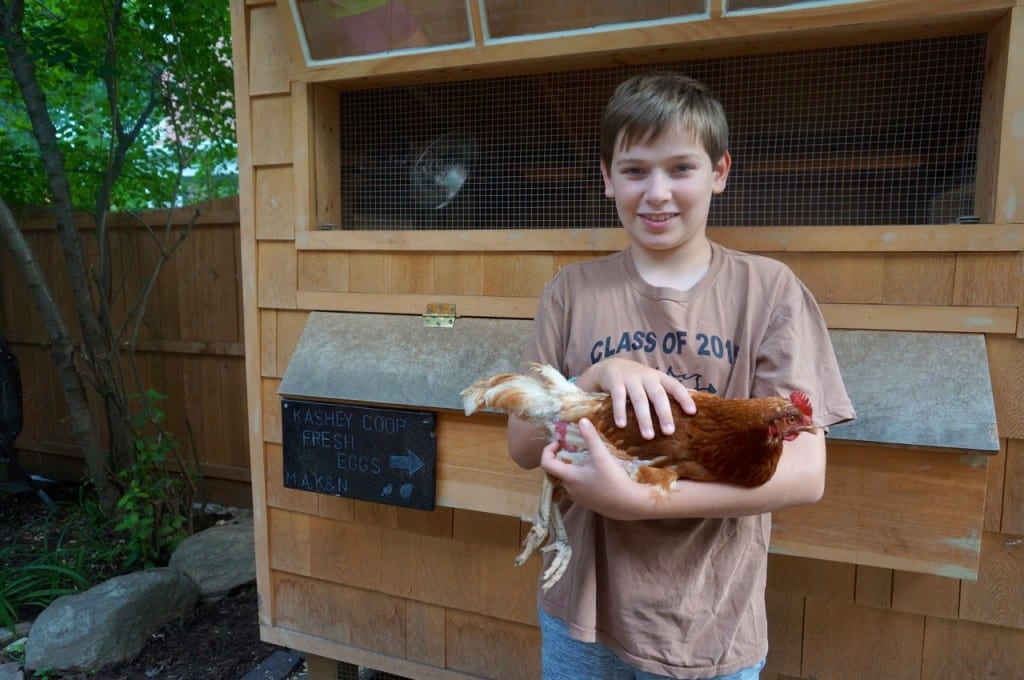 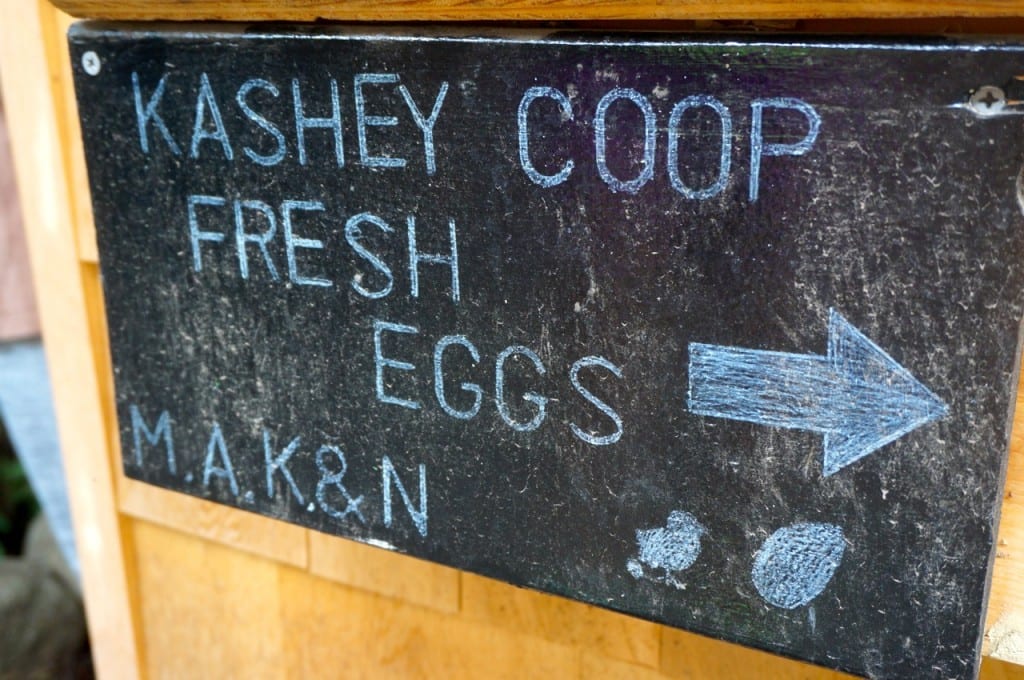 Sign on the outside of the Kashey’s chicken coop. Photo credit: Ronni Newton 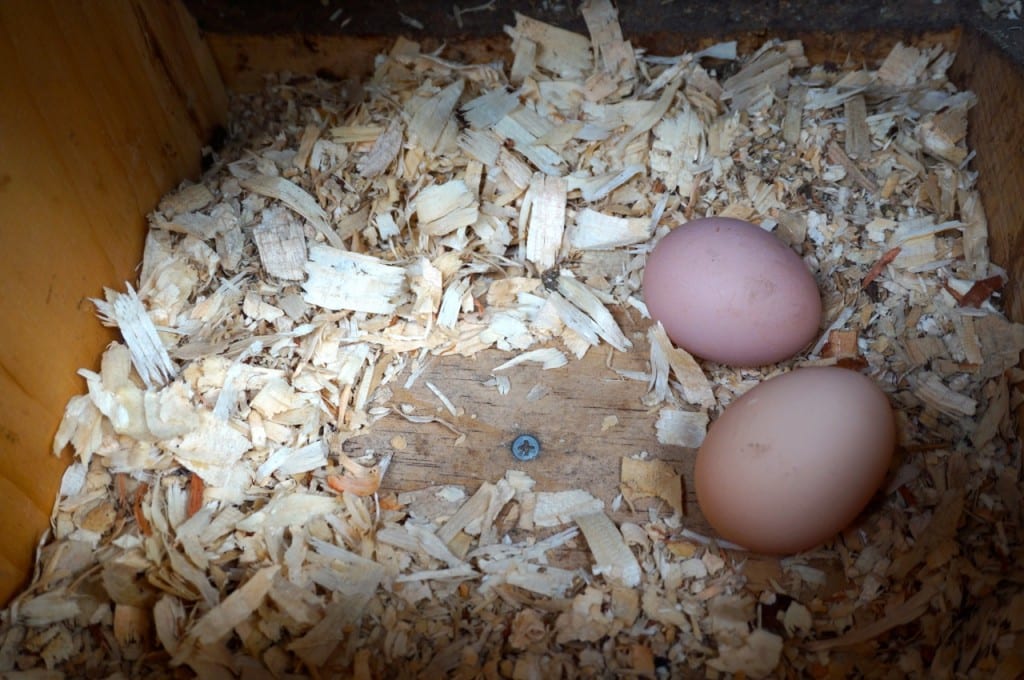 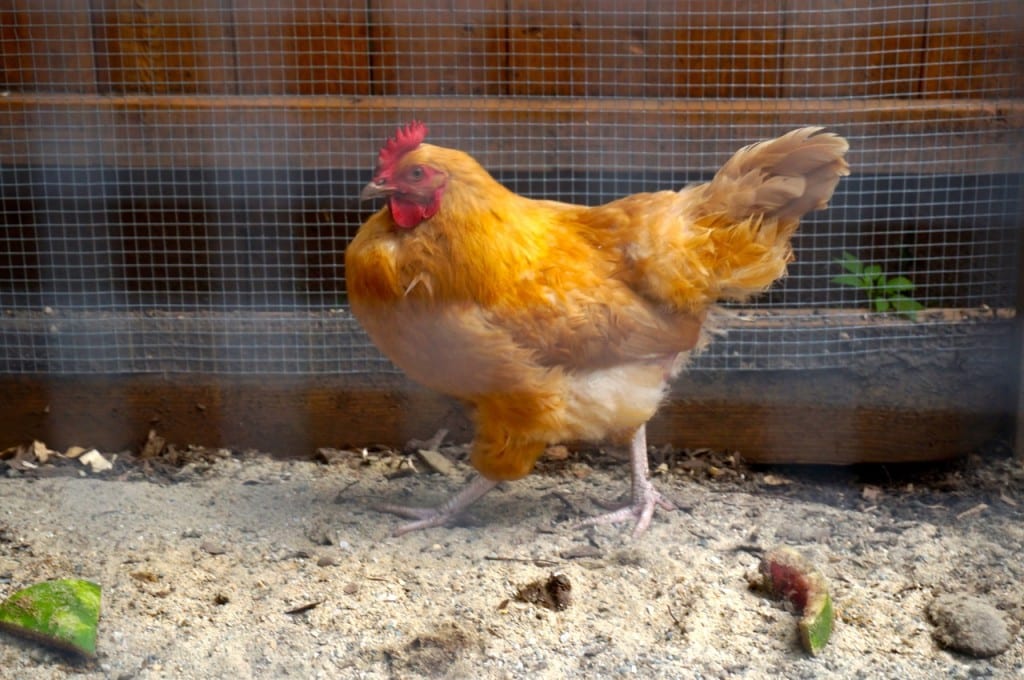 One of the Kashey’s Buff Orpingtons. Photo credit: Ronni Newton 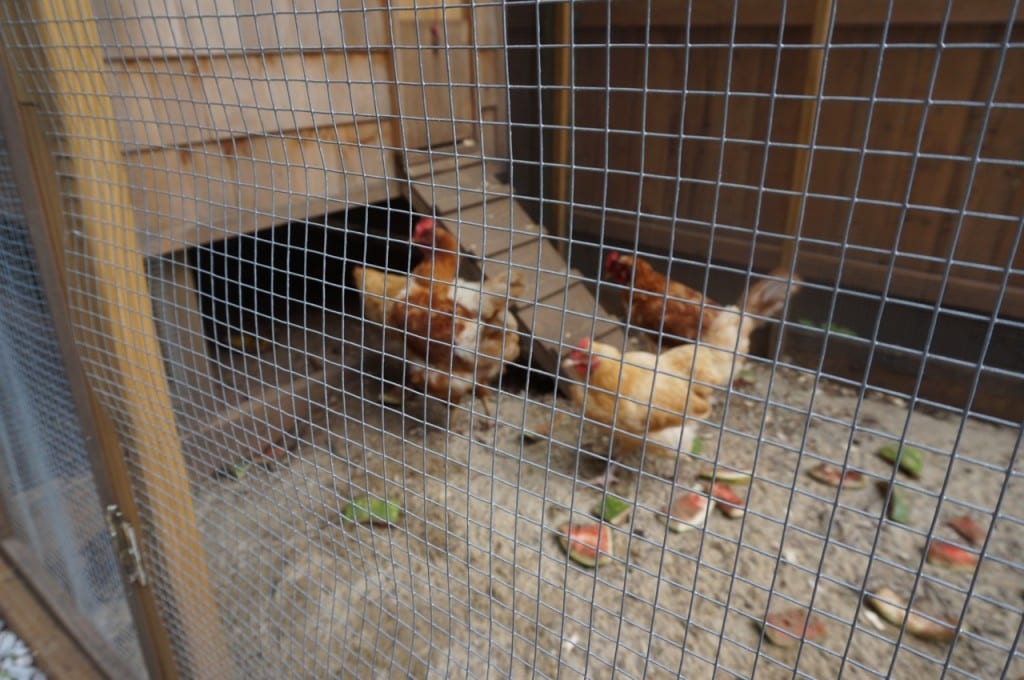 The Kashey’s chickens have been snacking on watermelon dropped off by a neighbor. Photo credit: Ronni Newton