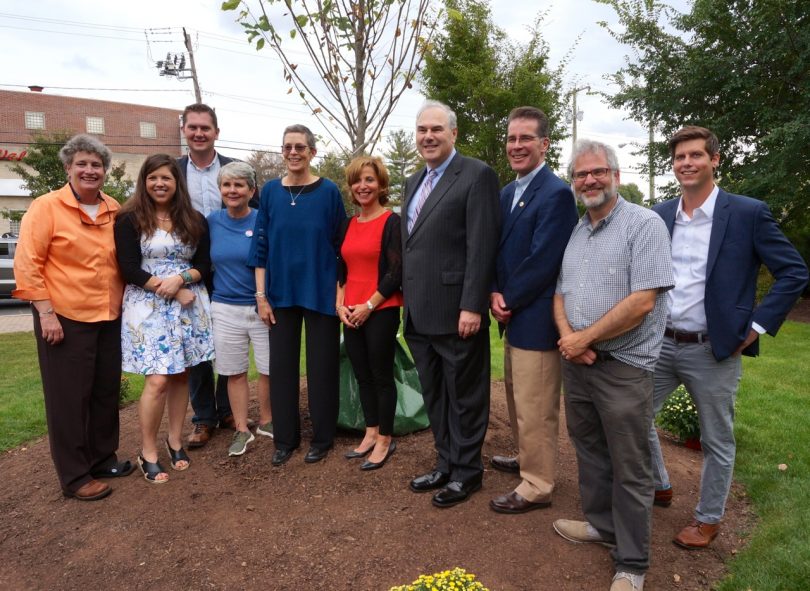 A Burgoyne elm has been planted in Elmwood, and on Saturday the tree was officially named in honor of former West Hartford Public Schools history teacher and Town Historian Dr. Tracey Wilson.

Dr. Tracey Wilson said she was excited, honored, and humbled by Saturday’s ceremony, during which a Burgoyne elm planted in William E. Blanchfield Park in Elmwood was dedicated in her name. 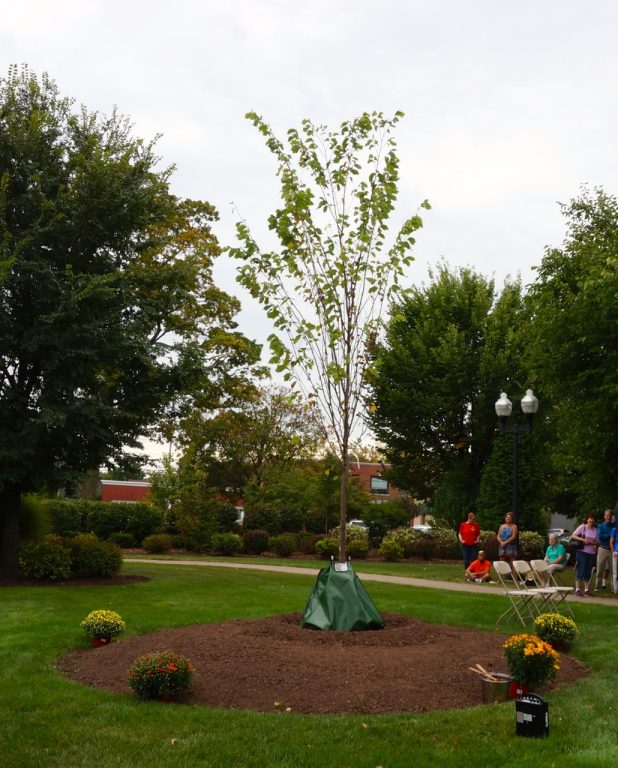 “Thank you so, so much for this ceremony,” Wilson told the crowd of about 150 who gathered in the park next to the former Talcott Junior High School (now Quaker Green) where Wilson began her teaching career in 1977. She was a teacher at Talcott for several years before moving to Conard High School, where she taught a variety of history classes, including local history, until her retirement in 2015.

“I’m really humbled and honored to have this elm tree planted in my name. Who gets to have something like this?” Wilson said. “And especially when I can appreciate it.”

The non-profit organizations which made the tree dedication possible – the Noah Webster House & West Hartford Historical Society and Knox, Inc. – are two of her favorites, Wilson said. “History and gardens –  two of my favorite things,” she said.

Wilson said that the planting and dedication of the elm tree represents “a symbol in history, a community event, and a tool for educating us about liberty in a democracy.”

Sharing a bit of history, Wilson said the date of the dedication coincided exactly with the date of the second battle of Saratoga, a turning point in Revolutionary War where General Gates’ forces were victorious over British General Burgoyne’s troops.

Liberty trees – the elms that gave “Elmwood” its name – were planted in celebration on the very same property on which everyone stood Saturday, which at the time was owned by Ebenezer Faxon. “Victory over Burgoyne elms,” Wilson said.

A community like Elmwood, like West Hartford, is a covenant, is an agreement to live together,” Wilson said. “And in a covenantal relationship we ask not what we get but what we give,” she said, encouraging everyone to continue to give back to the community and get involved in public service.

West Hartford has stories that help define the community, and understand the town today, Wilson said, noting the Beach sisters, Bristow, and Luna Park, and World War II housing. “These stories themselves become symbols, like this tree, of values that matter to our community,” she said.

“I’m so happy to have moved to this community 40 years ago and today to feel rooted in this place. You have allowed me to branch out, to plant seeds, and to provide shade for students and people who needed it,” Wilson said. Since being diagnosed with cancer a year and a half ago, Wilson said she is even more grateful for the support of family and friends in the community.

In just about a month, nearly $3,500 was raised for the Noah Webster House & West Hartford Historical Society and Knox, Inc. in honor of Tracey’s Tree, Liftig said.

“Tracey is such a remarkable woman … it is unbelievable to have that kind of legacy, to touch so many people so strongly and so profoundly,” Cantor said. “She has paid it forward is such a big way and made our world a much better place.”

Matos shared a bit of history of the area and the Burgoyne elms, and the importance of preserving those stories..

“I am  hopeful that in 100 years when people look at this great big old elm tree that will be behind me they will know it was named Tracey’s tree, and they will know the story of Dr. Wilson and her contributions to West Hartford community,” Matos said.

The First Connecticut Governor’s Footguard presented the colors to open the dedication ceremony. The efforts of Charlie Hilborn and Knox Inc. Advancement and Marketing Director Ryan O’Halloran in making the tree dedication possible were also noted.

Before the celebration broke up for refreshments – apples from Auer Farm and doughnut holes from the Elmwood Pastry Shop – Liftig asked attendees to help water the tree with a bucket of water and ladles, a symbolic baptism to give the tree some sustenance and good wishes. 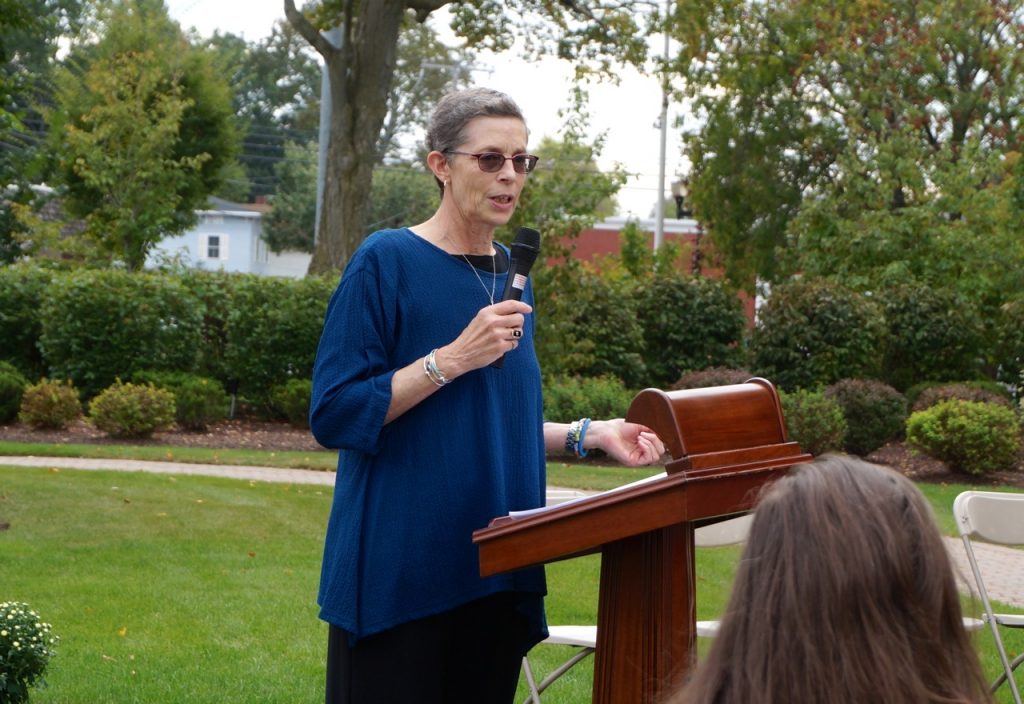 Dr. Tracey Wilson gives attendees a bit of a history lesson as she also thanks the community for the great honor of having a tree dedicated in her name. Photo credit: Ronni Newton 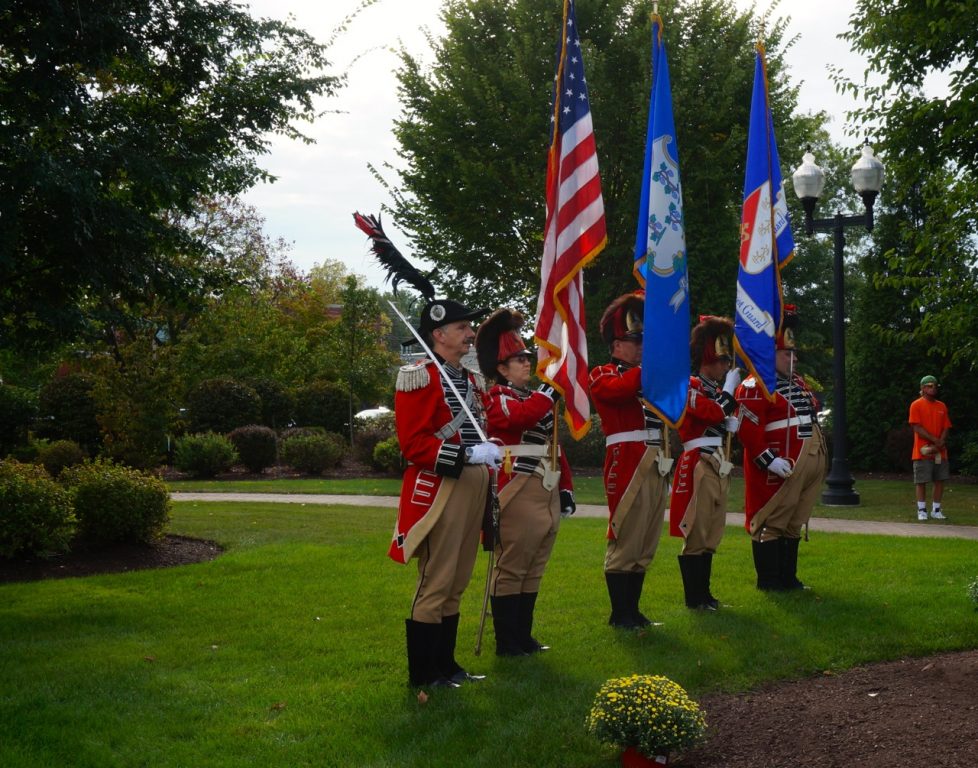 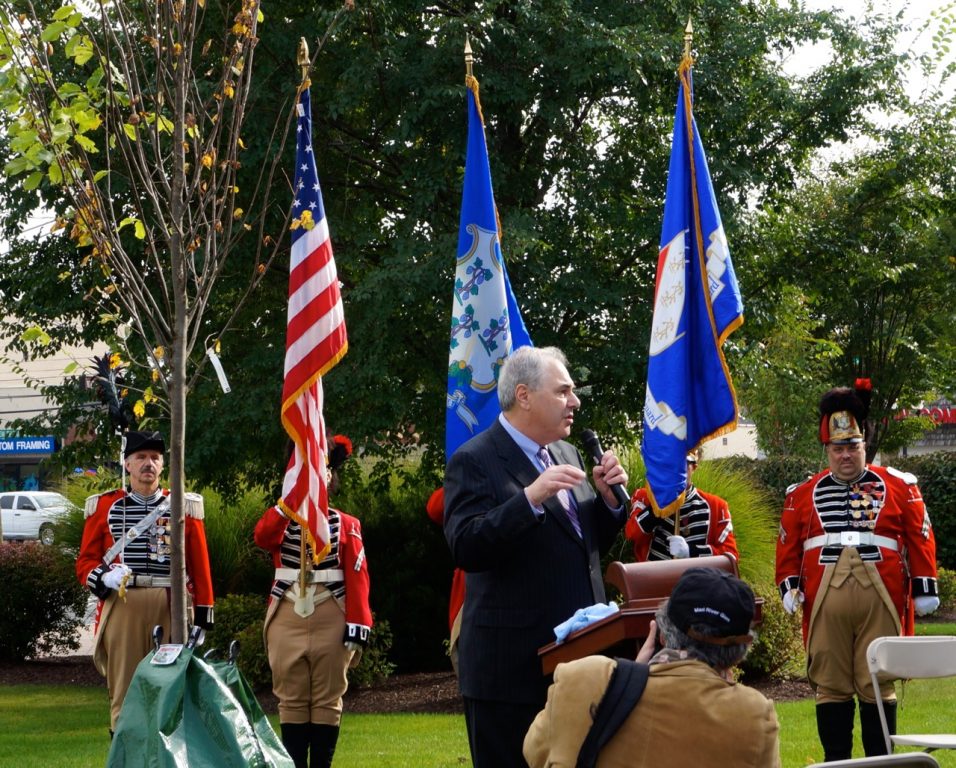 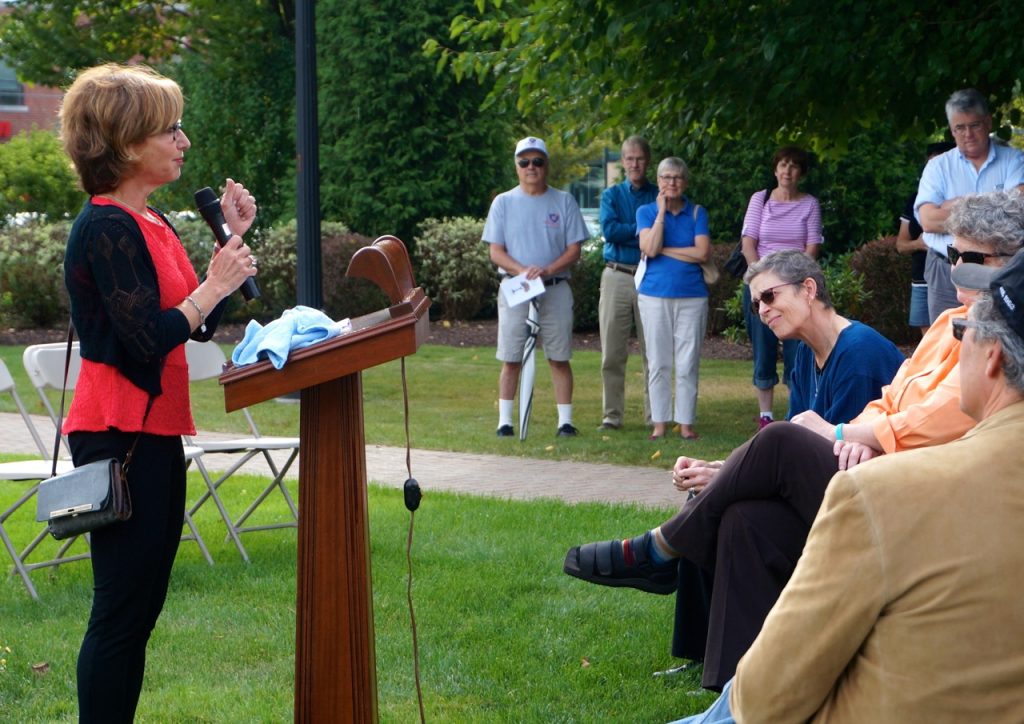 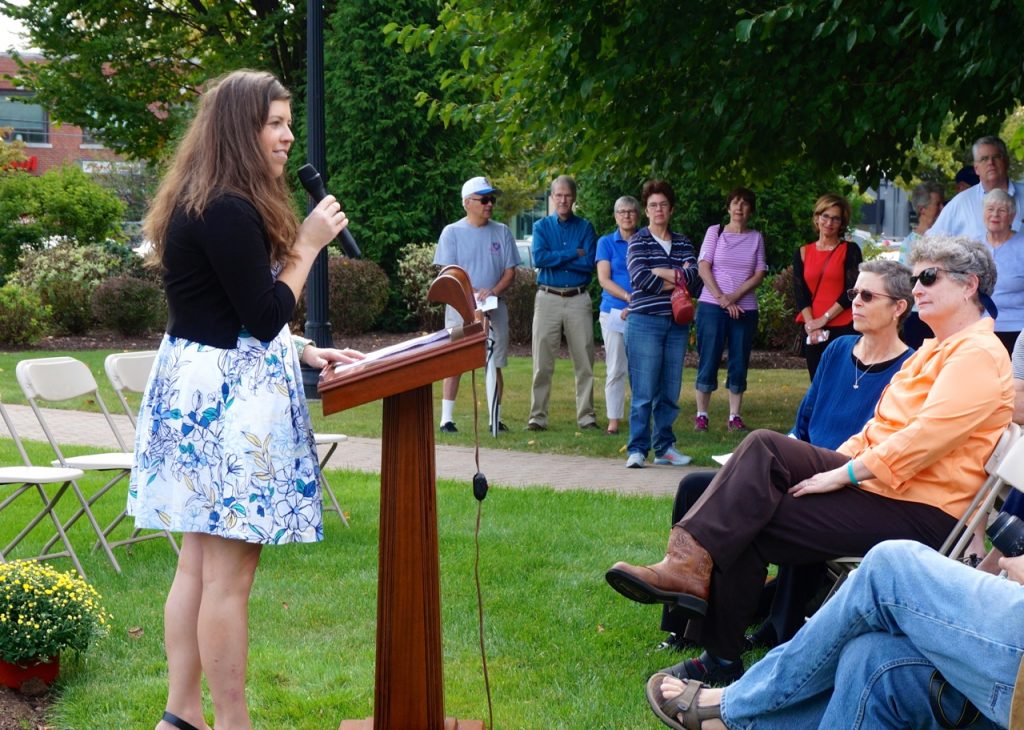 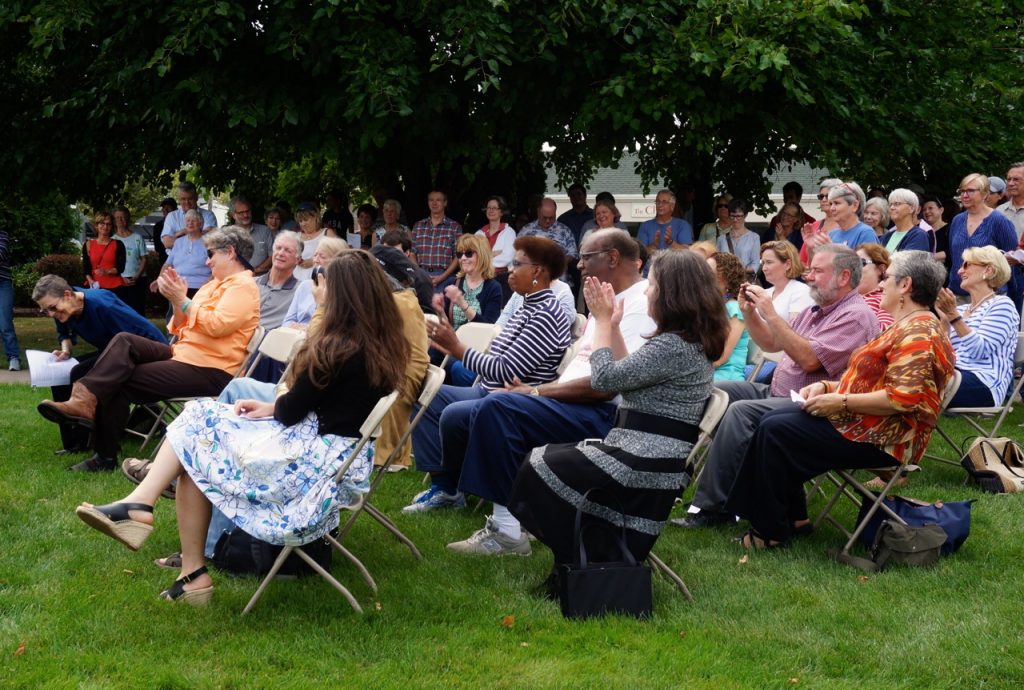 Following the dedication, everyone was asked to water the tree to give it sustenance. Dr. Tracey Wilson (left), Jenn DiCola Matos, and Beth Bye gave it the first ladlefuls. Photo credit: Ronni Newton 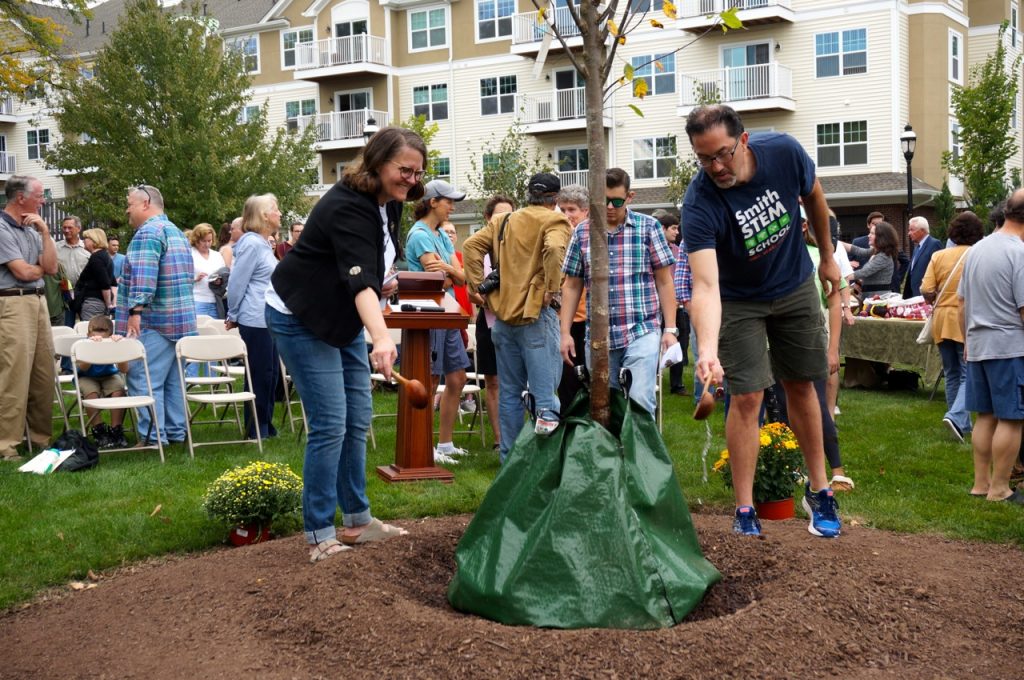