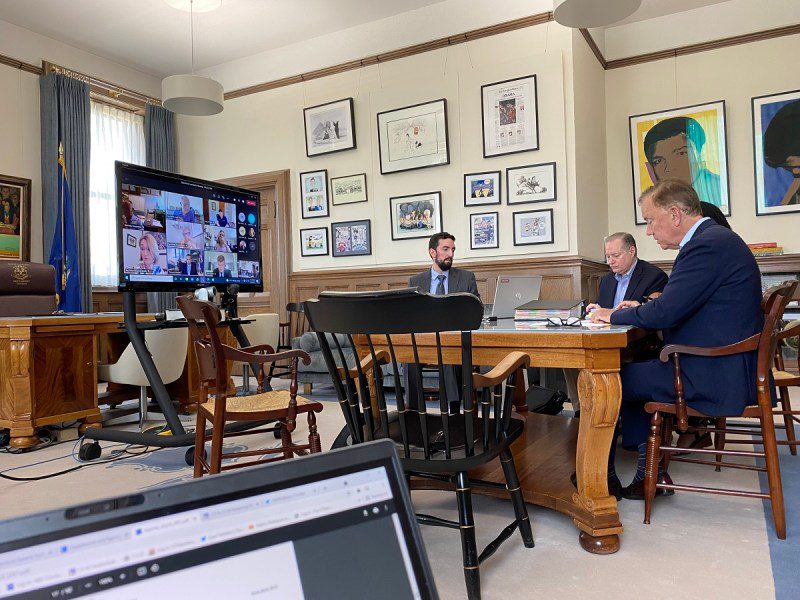 The state Bond Commission approved more than $1.1 billion in borrowing during its second meeting of the year Friday including more than $500 million to fund transportation projects and $300 million for school building projects.

The meeting was the first since the state Capitol building reopened after being closed to the public for more than a year as a result of the coronavirus pandemic. Gov. Ned Lamont and members of his administration initially sat in a largely-empty conference room inside the Legislative Office Building while most of the commission’s other members joined remotely. Lamont and his staff later moved to his office as a result of tech problems.

Although meetings are scheduled monthly, they are often canceled and so far 2021’s only other Bond Commission meeting took place in April. As a result, more borrowing has been crammed into fewer agendas.

“I’d say it’s a pretty robust agenda for what could be a pretty robust year when it comes to bonding,” Lamont said. “This is a unique time to be making investments in the state right now… interest rates are at historic lows so we can borrow more and it will cost the taxpayers less.”

During the meeting, state Treasurer Shawn Wooden said the reduced costs were due in part to Connecticut’s good standing with Wall Street credit agencies. Four major agencies have boosted the state’s rating this year. Wooden called this an “unprecedented milestone” for the state.

“Just to be clear, Connecticut has never been upgraded by all the major rating agencies at the same time,” Wooden said.

The commission released $512 million in Special Tax Obligation bonds to pay for transportation infrastructure repairs and upgrades. Those projects include repairs to highways and bridges like stretches of I-95 and the Merritt Parkway as well as $236 million for bus and rail improvements.

“Our roads are getting crowded again,” Lamont said. “We want to make it easier for people to get out of their cars, back to the rail.”

Another $300 million in General Obligation bonds will go to reimburse towns for construction costs related to building or improving local schools.

“School construction, school upgrade, getting back to school,” Lamont said. “We’re trying to get back to our new normal as fast as we can in this post-COVID world. We’re not as post-COVID as we hoped we were maybe a few weeks ago but we’re still making real progress there.”

The Bond Commission also released the final $20 million that had been set aside to fund a captive insurance company which assists property owners whose foundations are deteriorating as a result of corrupted concrete.

The problem has been especially acute in northeastern Connecticut where crumbling foundations have financially ruined some homeowners and impacted local property tax revenues.

“They are making significant progress in remedying this,” Wooden said during the meeting. “I think that just a little bit more in resources and staying the course, this will be substantially remediated in the coming years and I think this is a great step forward.”

Lamont agreed, saying the state should also explore other ways of addressing the foundation problem. He said it was important to pay attention to the deterioration of structures in Connecticut given the collapse of the Miami Surfside condominium building in June, which caused the deaths of nearly 100 people. Pyrrhotite, the mineral behind crumbling foundations in New England, has not been identified as a factor in that incident.

“Crumbling foundations has a special meaning now when you see what happened in Miami,” Lamont said.

The commission also approved $2.5 million to help pay for the construction of a memorial commemorating the victims of the Sandy Hook Elementary School shooting of 2012.

The Bond Commission approved $2.5 million for a new Elmwood Community Center in West Hartford, and $150,000 of the transportation funding will be used for improvement to the North Main Street and Albany Avenue intersection in Bishops Corner.