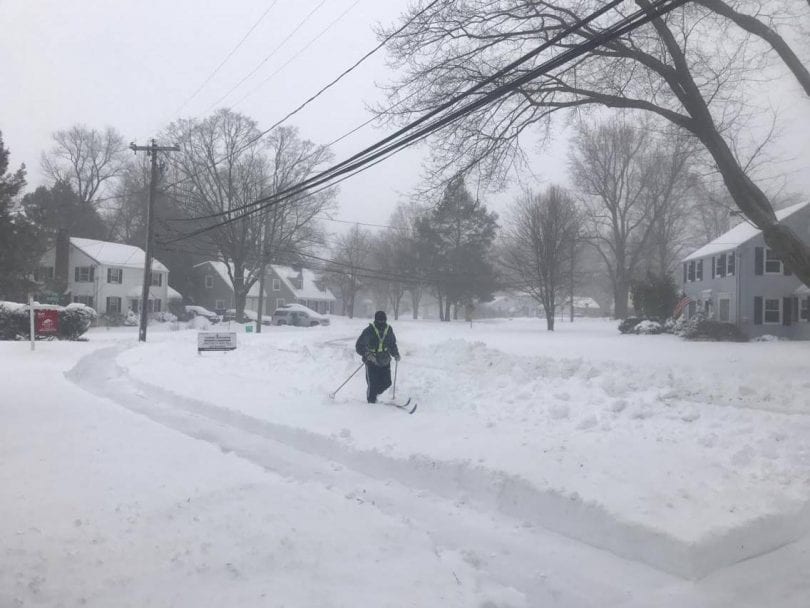 Cross country skier making the most of the March 14 snowstorm in West Hartford. Photo courtesy of Amy Melvin

Governor Dannel P. Malloy today announced that all third-shift, nonessential state employees should not report to work later this evening – Tuesday, March 14, 2017 – due to the ongoing winter storm.

Governor Dannel P. Malloy announced this afternoon that the travel ban on state roads that went into effect early this morning will be lifted effective at 5 p.m. today, but he is still urging motorists to stay off the roads if possible this evening as conditions remain treacherous.

As the travel ban on state roads remains in place, crews are continuing to work to clear the roads so they can be up and running as soon as possible.

Connecticut State Police report that between 5 a.m. – 1 p.m. troopers responded to 28 minor crashes and 86 motorist assists, and reminds drivers that if you must travel, to clear vehicles, not just the driver’s side, of ice and snow.

The Governor expects to make more announcements later this evening.

The Hartford Courant reports there is still plenty of work to be done. Read more at courant.com.