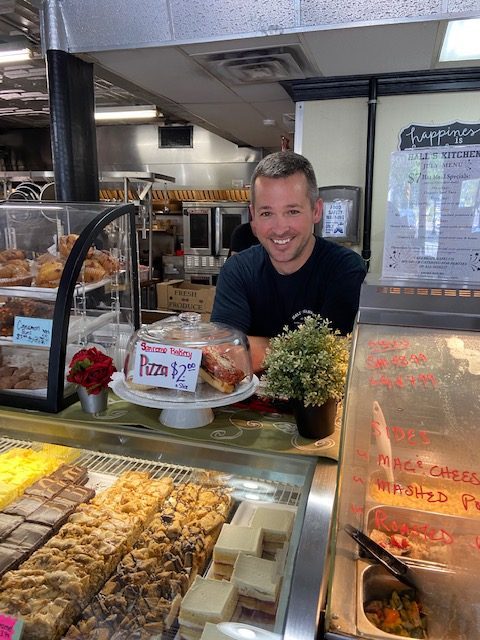 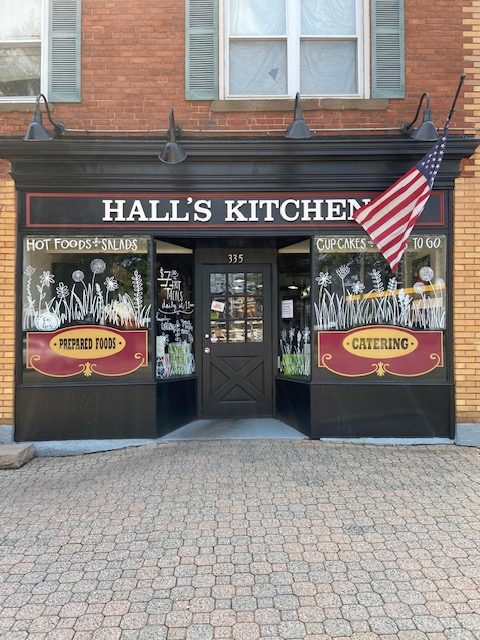 Hall’s Kitchen opened in 2015 next door to its mother store, Hall’s Market, and has been a popular place to grab a quick lunch, dinner for later, or a yummy baked good. Photo credit: Tracey Weiss

If it’s Tuesday, it’s chicken parm day at Hall’s Kitchen. A Tuesday without chicken parmigiana would not be a good day for lovers of one of the store’s most popular entrees.

That’s how passionate customers of Hall’s Kitchen are about their favorite meal, specifically, and the 40-plus entrees the store carries every day, in general. “We always rotate hot meals throughout the month but chicken parm is out there every Tuesday,” said Dave Booth, the third-generation owner of Hall’s Market and Hall’s Kitchen. The former, a staple on Park Road since 1935, has always provided its loyal customer base with grocery items, butchery, seafood, deli items, catering, and more. 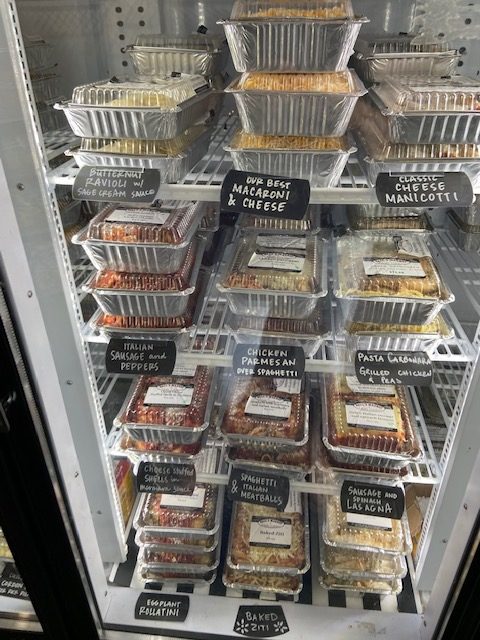 The hard work and attention to making good food has paid off over the years. Hall’s is a perpetual winner of people and critic’s choice award winners from a variety of local and regional publications.

Hall’s Kitchen is where everything homemade happens, including all of the entrees, bakery items, daily hot meals, and soups they offer every single day, and of course, all of the catering they do.

In the winter it’s meatloaf and Salisbury steak, and beef stroganoff, among others.

“Year-round we have three kinds of salmon and they are always popular,” he said, which includes maple pecan, honey-glazed, and Cajun-grilled varieties. “We sells tons of (uncooked) salmon in the market too.”

Metal flow pans keep food fresher. “You can come in at 10 a.m. and get dinner, throw it in the oven later and eat. It’s a homemade TV dinner, like going to a restaurant” but at home. 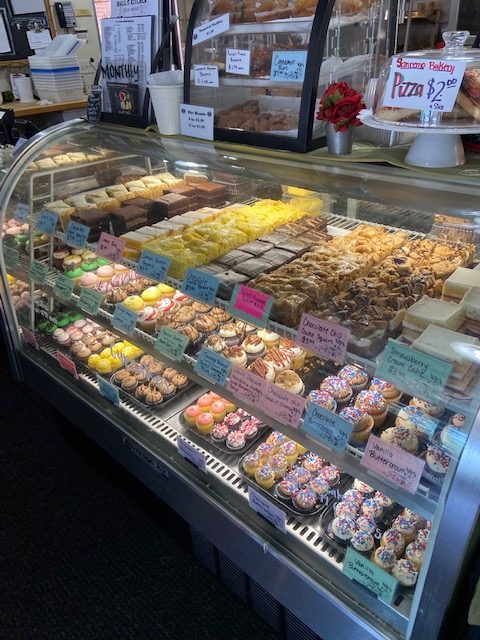 “All of the bakery stuff is made here,” he added. “Cupcakes are popular year-round. They’re always the showstopper.” Brownies, cookies, and dirt bombs are popular, too.

Hall’s Kitchen also has grab and go salads and wraps, for those who don’t want to wait in the long line at the deli in the market. 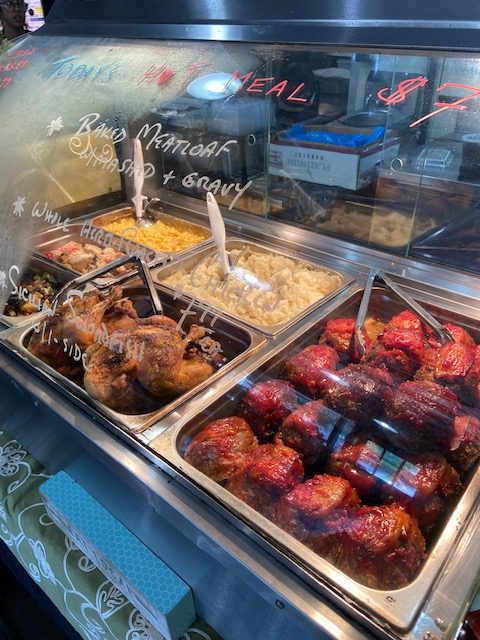 Mini meatloaves, rotisserie chicken, mashed potatoes, mac ‘n cheese and roasted vegetables are some of the choices for lunch at Hall’s Kitchen on a Wednesday. The store rotates its meals daily and seasonally. Photo credit: Tracey Weiss

Catering is a large part of the business too. “We do a lot of backyard weddings and graduation parties, corporate lunches, and platters,” Booth said. “The price point is much more attractive. It’s no nonsense and you get what you want.” 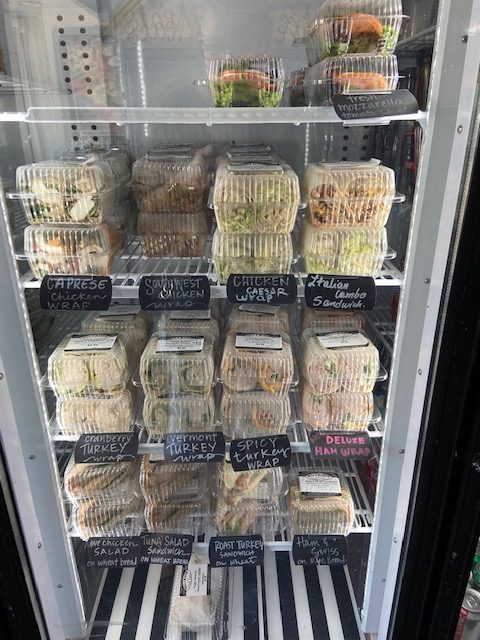 “We originally opened Hall’s 2 Go in 2001,” he said. “My father [Ron Booth] owned the buildings for a long time. We turned it into a Boston Market-style market. There weren’t a lot of places around with prepared foods,” Ultimately, “it wasn’t profitable,” so they closed it.

In 2015 they gave it another try, with a different focus.

“The first time we had a large hot case,” Booth said. “Now we only do a daily hot meal and one other alternative. We carry our entrees in metal containers. So, you can throw it in the oven and it will keep.” ​​

Ray Booth, Dave Booth’s grandfather, was a Pepperidge Farm salesman. Hall’s Market, owned by Franklin “F.E.” Hall, was one of his stops.

“He bought the store from Mr. Hall in 1967,” Booth said. Eventually, Ron Booth stepped into his father’s shoes and ran the store until Dave Booth and his sister, Jennifer Booth Hettrick, bought the business from him in 2009. Booth, like all of his siblings, including his other two sisters, Susan and Karen, all worked at the store during their high school years. Jenn and her family have since moved to Vermont, leaving Dave as the sole owner now.

“They like it up there,” Booth said of Jenn’s move.

“We have a niche here,” Booth said. “We’re small, so we focus on customer service. We know a large percentage of our customers. And we can be more particular about the products we carry than a larger store can. We’re more hands-on. We have a very loyal base and we can accommodate a lot of requests. People can come in and quickly get a quick meal or buy some burgers for the grill.”

Like a lot of businesses, the pandemic threw a curve ball into the business. “It put a damper on catering but it’s starting to come back,” Booth said. “We were doing tons of delivery and curbside pickup.

“It’s been a long year and a half … stressful. Every day I wake up and I think, ‘are there no taxes? Do I charge for bags? Are we wearing masks or no masks?’

“Right now, I’m just trying to get us back to the baseline!”

A version of this story originally appeared in the August 2021 issue of West Hartford LIFE. 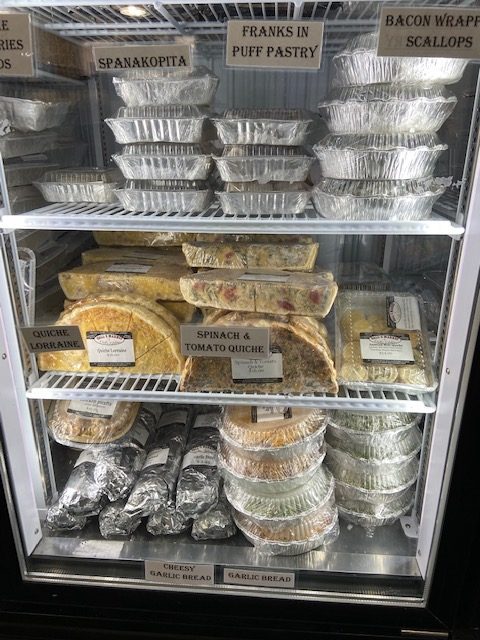 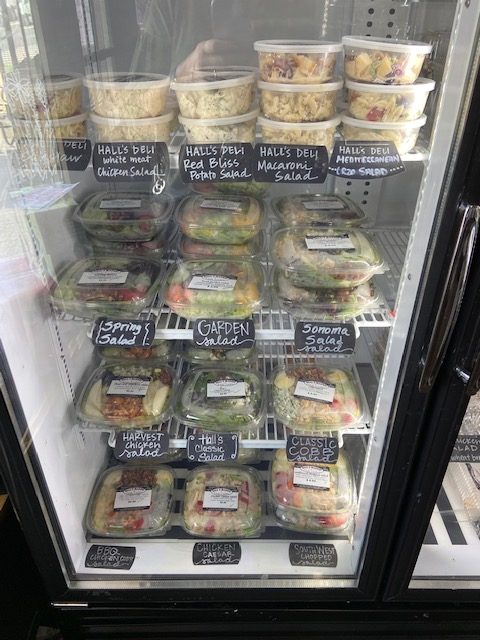