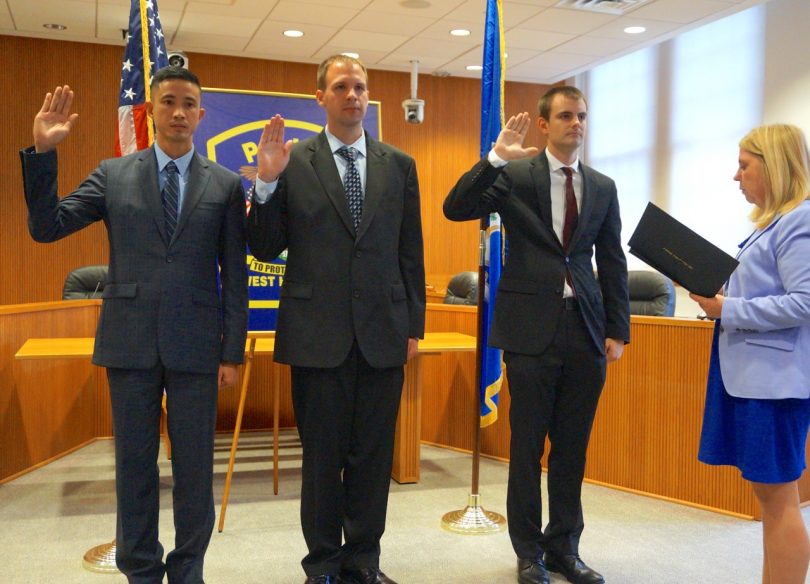 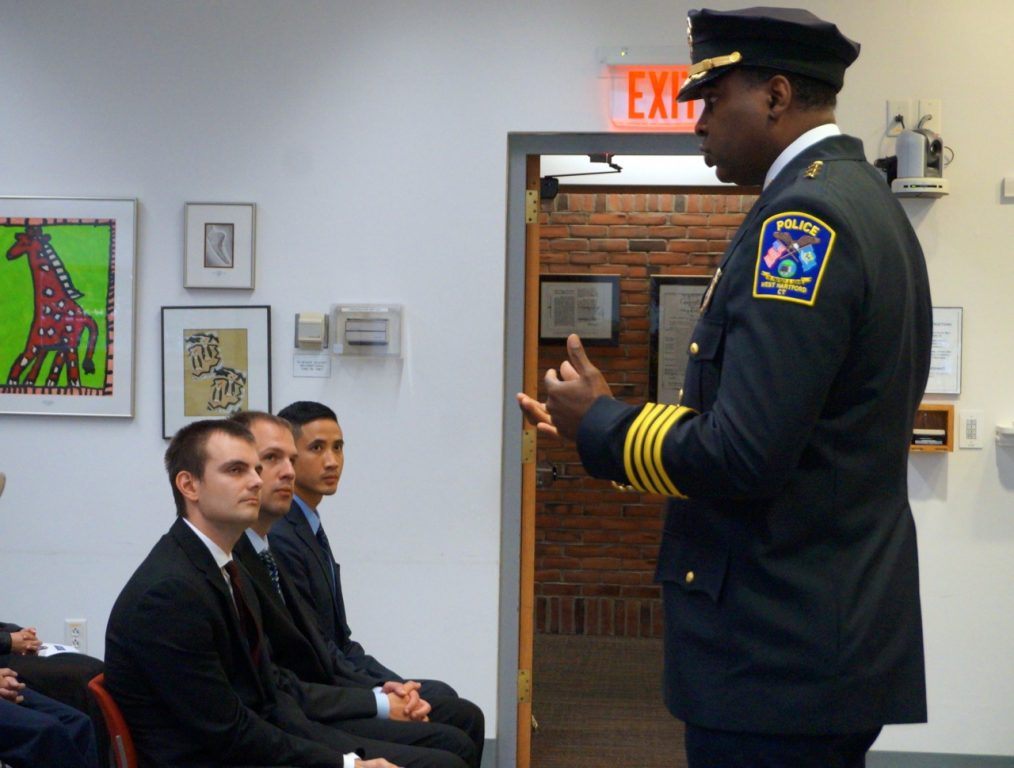 West Hartford Police Chief Vernon L. Riddick presided over a swearing-in ceremony Monday night, welcoming three new recruits to the department while also imparting the message that they are embarking on a difficult but rewarding career and must live up to high expectations.

Riddick said that even with the three new officers – and five others who were recently sworn in and attended the ceremony along with the new hires’ family, friends, and town officials – the West Hartford Police Department is still down about 11 officers. “We need you in a big way,” he said, noting that the cost of hiring and training each new officer is about $125,000 in the first year.

“You’ve come a long way thus far, don’t mess it up – and I’m only half joking,” Riddick said. He told the new officers that while they are not expected to be perfect, “professionalism, courtesy, and humility” are expected of them. Tarnishing the badge through inappropriate conduct, he said, is a serious offense that could result in dismissal.

The police force is a brotherhood and sisterhood, Riddick said, and the experienced officers will have the backs of the new officers. At the same time, he said, “We need you to have our back. The citizens need you to have their back. You should be willing to sacrifice or put forth your life for somebody else,” said Riddick. “You’re going to be trained to react to certain situations.”

Riddick also expressed his sincere thanks to the families of the new officers, for supporting their loved ones as they assume this tremendous responsibility.

“Law enforcement is an honorable profession, one of the best jobs in the world,” said Riddick to the new hires. “Do not tarnish this badge, appreciate this opportunity. You are a public servant. You’re here to serve and to assist and to help and to protect the public as well as your brother and sister police officers.”

All three new officers already have some type of background in law enforcement or public safety.

Eden, who earned a bachelor’s degree in finance from Central Connecticut State University, was a member of the West Hartford Police Cadets and former cadet of the year while growing up, and attended the West Hartford Police College Academy in 2014-15. He earned a life saving medal in 2017 from the Farmington Police Department for saving the life of someone who was choking.

Eden was most recently a security supervisor at Westfarms Mall.

Nguyen, who was born in the village of Tan Chau in the Di Linh Province of Vietnam and speaks fluent Vietnamese, was naturalized in 2010. He earned a bachelor’s in sociology from Central Connecticut State University where he was a member of the Golden Key International Honor Society.

Nguyen completed basic combat training with the Connecticut Army National Guard in the summer of 2015, and during his service in the National Guard earned an associate of applied sciences in intelligence operations studies. He most recently worked as a shift supervisor for SecurAmerica.

Potz joined the United States Marine Corps and from 2010-2014 served as a finance technician. He earned a bachelor’s degree in criminology with a minor in community engagement from Central Connecticut State University in 2017.

Potz currently lives in New Britain and has been working as a security guard while pursuing a master’s degree at the University of New Hampshire.

Town Manager Matt Hart also spoke to the new hires, congratulating them on taking this step. “You are joining the best police department in the state,” he said.

While it’s a very important commitment and a challenge, Hart said, “We have confidence in you.” He said the new officers should look forward to a long and rewarding career with the West Hartford Police Department.

All three were sworn in by Town Clerk Essie Labrot, taking an oath of office to support the U.S. Constitution and the Constitution of the State of Connecticut, and support laws and town ordinances.

“As a team we will help you accomplish this,” Lt. Eric Rocheleau, who heads the department’s Training Division, told the new officers. He also told them to read the department’s mission statement carefully, because they will be held to very high standards.

All three new hires will begin the Connecticut Police Academy’s months-long training program in New Britain this week. Following their graduation from the Academy, under Rocheleau’s guidance the new officers will begin the West Hartford Police Department’s 16-week Field Training Officer program before being assigned duties on their own. 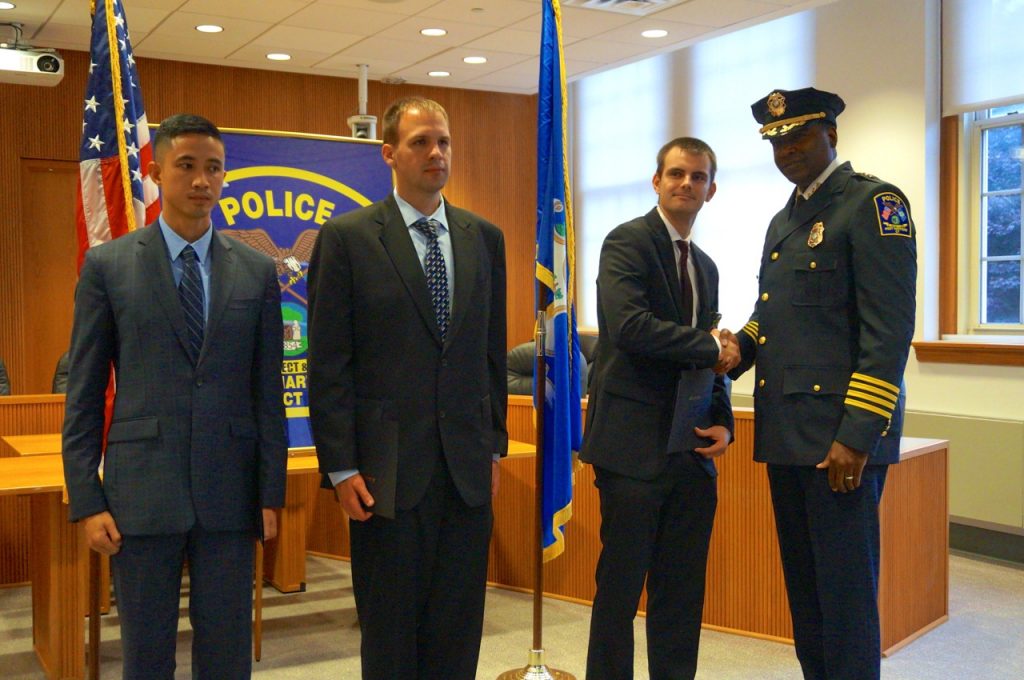 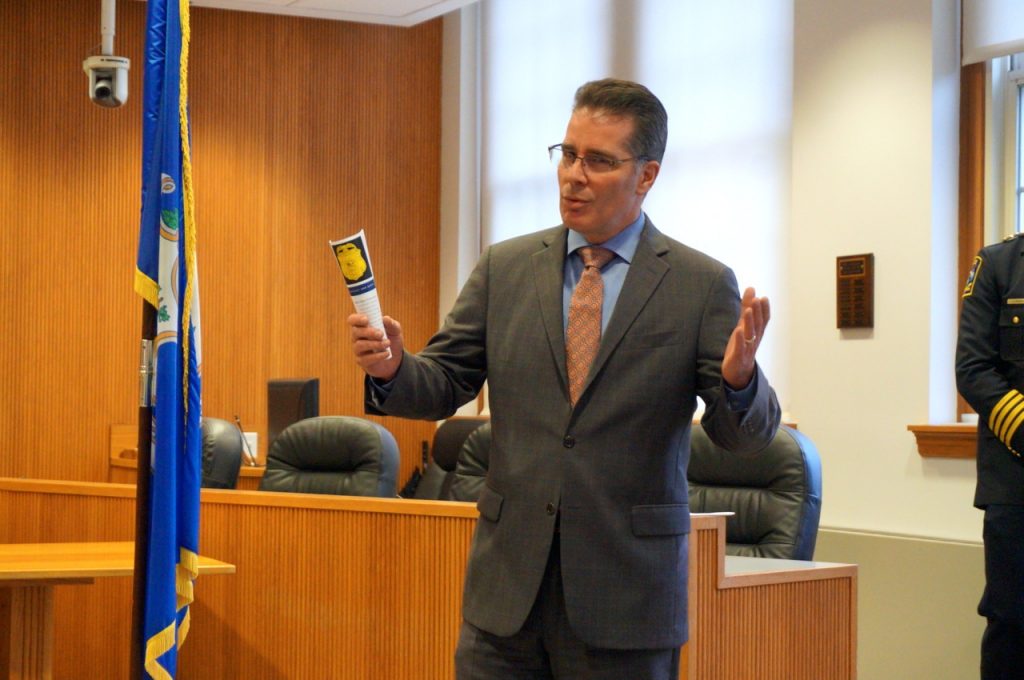 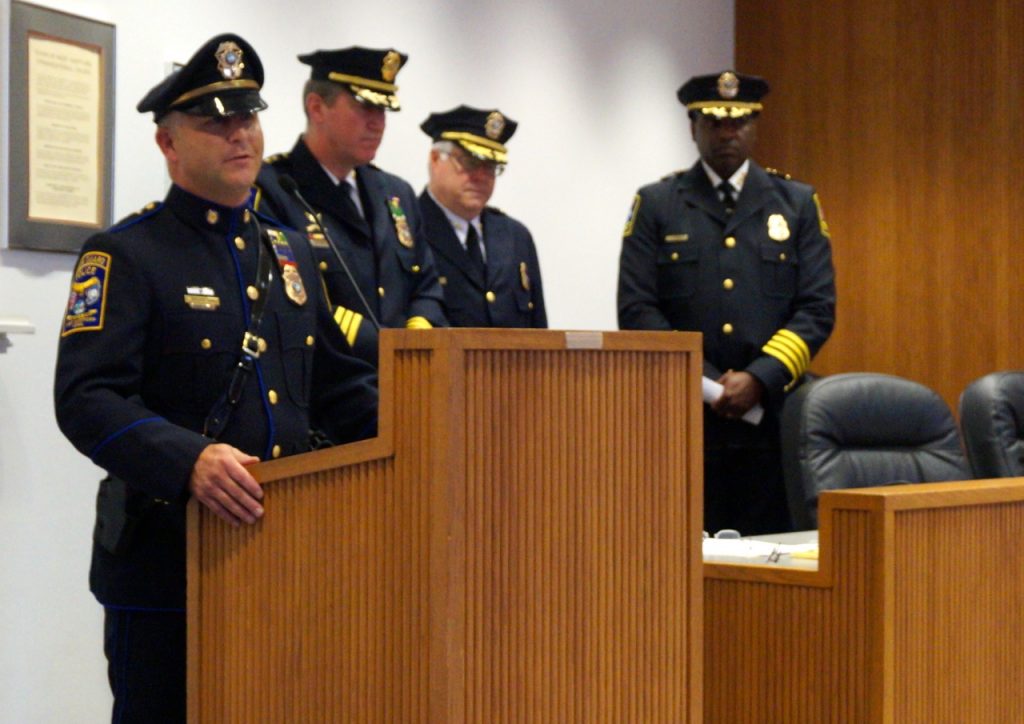 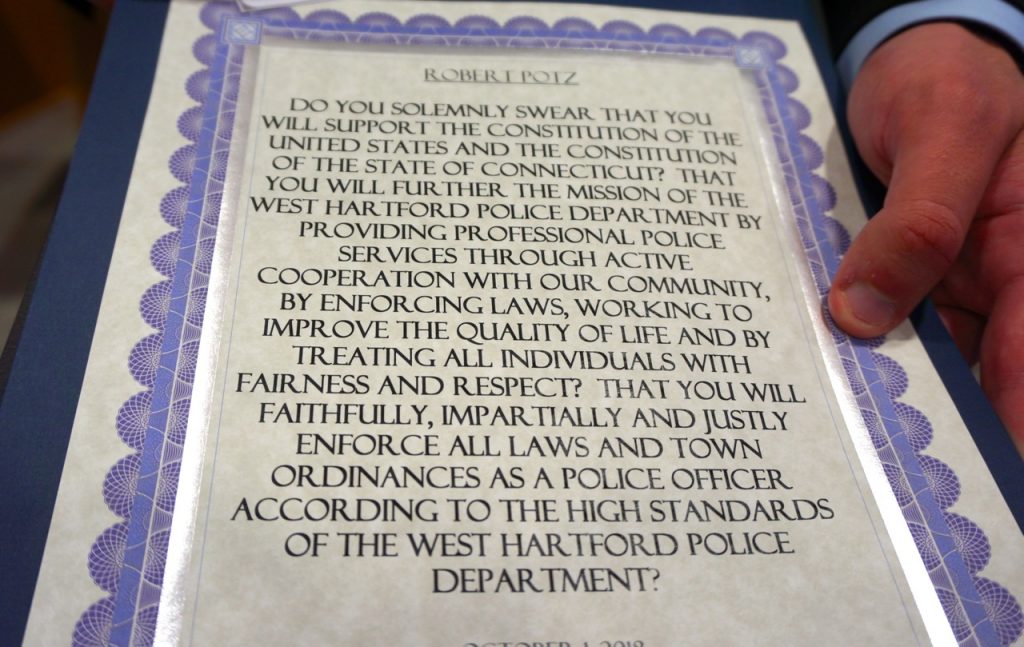 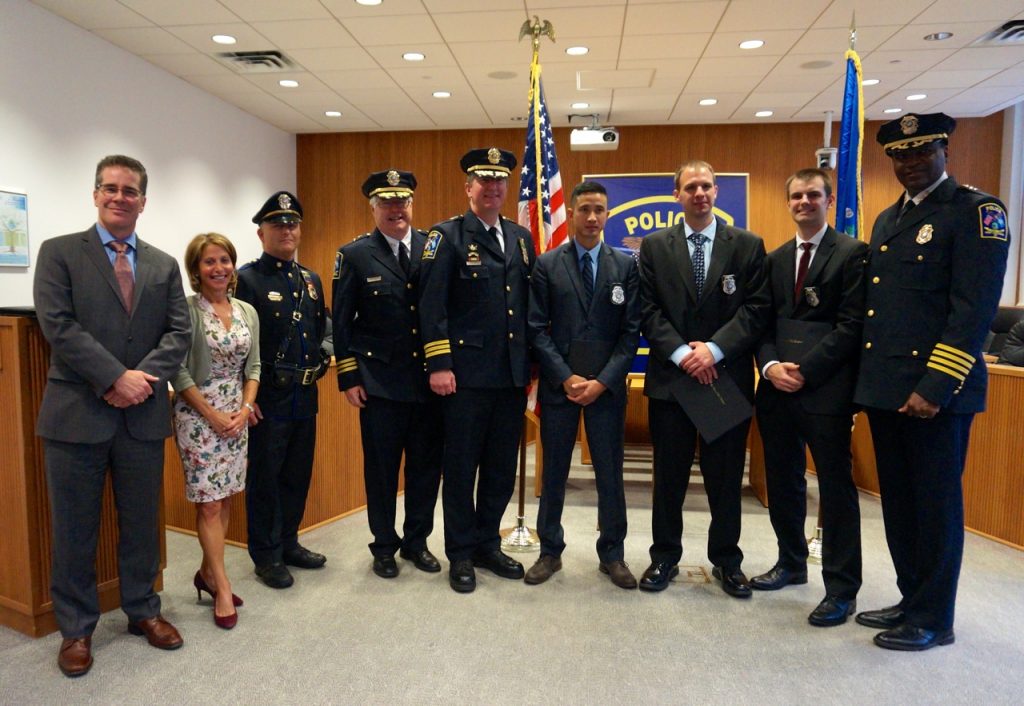 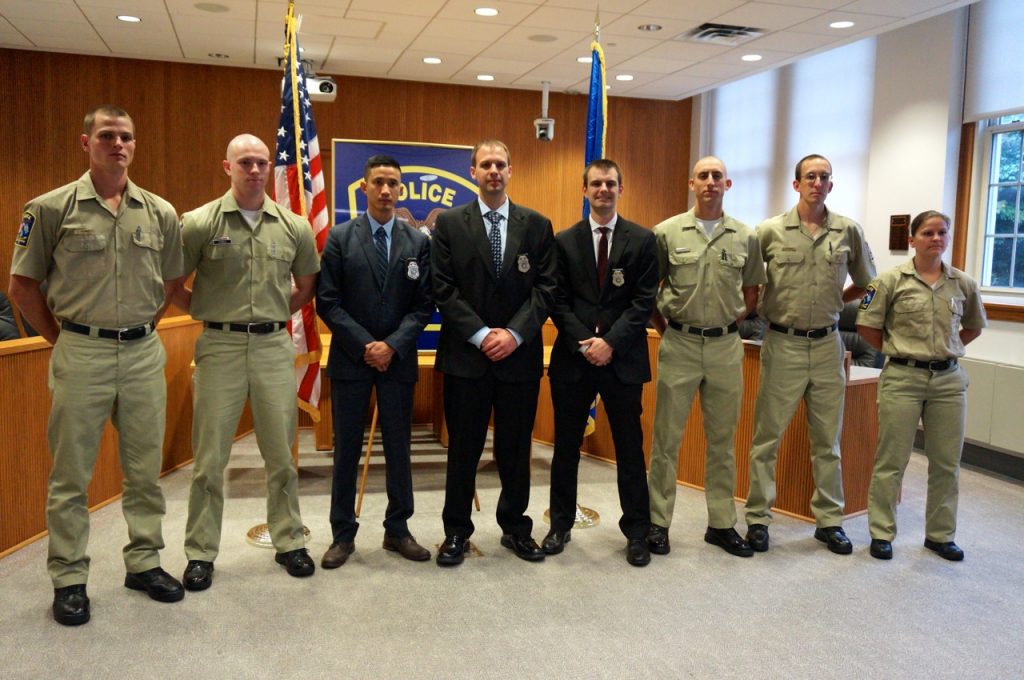