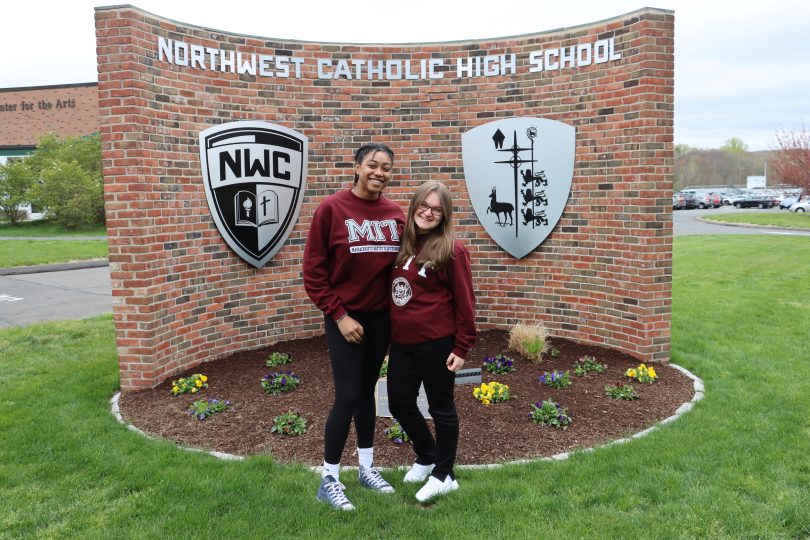 Two members of the Class of 2022 at West Hartford’s Northwest Catholic High School will be attending the prestigious Massachusetts Institute of Technology in the fall.

Northwest Catholic High School (NWC) is proud to announce that two members of its Class of 2022, Brianna Lebrun and Lillian Bluestein, are headed to Massachusetts Institute of Technology (MIT) in the fall. This achievement marks the first time in over 10 years that a student from NWC has been admitted to this university and what is even more remarkable is having two NWC students accepted at the same time.

According to Forbes.com, MIT is ranked #6 in the country and has also been ranked the No. 1 University in the world by QS World University Rankings for 10 straight years in a row. With only a 4% acceptance rate, Lebrun and Bluestein are excited to be attending their top pick school.

Bluestein, NWC’s Class of 2022 valedictorian, will be studying biomechanical engineering in the fall while Lebrun will be double majoring in electrical engineering and computer science. Lillian happily adds that “I’ll know more people going into MIT than I did coming into Northwest.” Lebrun is also looking forward to having a fellow classmate with her in the fall. She said, “It’s honestly cool and a little crazy that two people will be going from such a small school. And it’s nice to know that there’s someone on campus that I’ll be familiar with since I’ve known and taken classes with Lillian for the last four years.”

Both students have been very involved at NWC for the last four years. Bluestein has participated in Mock Trial Club, the NWC golf team as well as the school’s Math team and Global Awareness Club. Lebrun has played basketball all four years at NWC. Lebrun also participated in the school’s Advocates for Equality Club and Link Crew.

Bluestein, the politically active and socially aware student, has a passion to help create more accessible medical devices, technology, and drugs for healthcare. She said, “I am very passionate about the science side of that and trying to develop those technologies that are innovative but also very accessible to people. My main goal in life is to have a biotech company that can create those innovative and accessible treatments.”

Bluestein was accepted by her top three choices: MIT, Duke, and UConn. She was also awarded the “Stamps Scholarship” at UConn which offered her a full ride to the university. Bluestein said, “I am very honored to have received that. It was a hard choice picking between those two.” However, she is enthusiastic with her decision to attend MIT in the fall.

At a young age Lebrun knew she wanted to pursue engineering. She said, “I knew I always wanted to go into some form of engineering. I loved Legos when I was little and building stuff. My dad is a mechanic so I would like to help him fix cars and stuff, so I knew that was the field I wanted to go into.” Lebrun is also fascinated with coding and the possibilities that can come with both degrees. She was also accepted into her top three choices of schools which were MIT, Worcester Polytechnic Institute, and Rutgers. Lebrun looks forward to the possibilities that are ahead as she enters into this new chapter of her life, she is inspired to make a positive impact in the world.

Both students attribute the support of their teachers and parents for their success. Bluestein expressed, “My teachers were crucial in helping me achieve my goals throughout high school. Their guidance and support – both in and out of the classroom – helped shape who I am today, and I will forever be grateful for their mentorship.” Bluestein continued by sharing how her Latin teacher, Mr. Swanson would always go above and beyond to support her in her studies.  Bluestein said, “The dedication that he has as a teacher and a mentor is truly admirable, and I aspire to emulate his passion and dedication in my future career.”

Lebrun shared that, “There have been several people in my life, besides my family, who through their support and guidance have helped me reach where I am today. But specifically, my math teacher, Mrs. Calendrillo has made a large impact on who I’ve grown to be. Not only was she an amazing teacher who truly helped to prepare me for my future endeavors, she was also someone I can count on for everything.” Lebrun continued, sharing how if there was any problem she had, she knew Mrs. Calendrillo would do her best to help. Lebrun said, “I will always be grateful for how much she has helped me make my way through high school these past few years.”