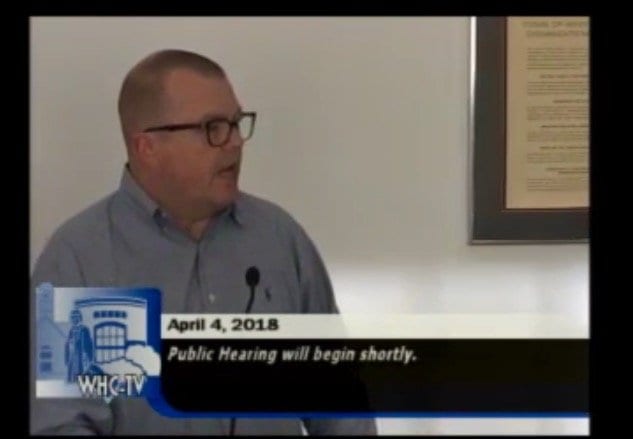 Brookside Boulevard resident Winston Hall speaks to the Town Council at a public hearing on the budget on Wednesday. Image from WHC-TV recording

Two residents addressed the West Hartford Town Council Wednesday night at the first of two scheduled public hearings on the town manager’s proposed $288.3 million budget for 2018-19, and both requested modifications to the budget during the approximately five-minute hearing.

John Cotter, who said he has lived on Fairfield Road for 30 years, asked the Council to reconsider the increase in the motor vehicle mill rate.

The mill rate for motor vehicles had been capped by the state for the past two fiscal years, but a cap is not required this year and Town Manager Matt Hart has proposed a uniform mill rate of 41.54 for real and personal property as well as automobiles.

“I understand the constraints the town is under and the decrease in state funding commensurate with the cost of contractual requirements … I understand the town’s need for an increase in revenues. My only problem with the budget is that it called for a uniform mill rate for all taxes,” Cotter said. The increase in the motor vehicle mill rate from 32 to 41.5 is 30 percent.

“It almost seems like a sin tax is applied to people who have more expensive vehicles,” he said. “I thought that a 30 percent increase in a particular tax, in any tax in one year, is excessive,” and said he would prefer some other method to even out the tax.

Winston Hall, a resident of Brookside Boulevard, said that and his wife relocated to West Hartford from Kansas two years ago. “Since we’ve been here the market value of our house has decreased by about 10 percent while my assessment has increased 10 percent,” he said.

Hall said that there was a tax increase last year and the proposed budget includes another tax increase. “My opinion is that this is not sustainable, that we are making it less and less affordable for young families to move to this area,” noting that Bloomfield and Glastonbury are growing very rapidly, and increasing taxes will make people less likely to choose to move to West Hartford.

“I urge the town council not to adopt the budget with another tax increase. That’s my only comment,” Hall said.

Mayor Shari Cantor, Deputy Mayor Beth Kerrigan, and Minority Leader Chris Barnes were present for the hearing, as were councilors Leon Davidoff, Dallas Dodge, Ben Wenograd, and Liam Sweeney. Councilors Mary Fay and Chris Williams were out of town on business and unable to attend.

When asked following the hearing about possible reasons for the sparse attendance by the public, Barnes said that he thinks most people don’t get involved, don’t think it’s “time well spent” delving into the particulars of the budget or taking the initiative to speak to the Council, but instead are more likely to move out of town if they feel they are paying too much in taxes.

“Even last year, in the face of a $20 million budget increase, we had only seven or eight people here,” Barnes said. In contrast, he said, more people – teachers and parents – often attend Board of Education public hearings because they are directly invested.

Barnes said that the 2018-19 proposed budget is still undergoing line-by-line review in committee. “Some items have been brought up but we’re certainly looking for additional savings,” he said. Barnes commended Hall for coming out to address the Council and said he thinks many others feel that the town should absorb increases in contracts and find other ways to make cuts.

“I think we’re in the eye of the storm right now,” Barnes said. He said that with that state’s budget gap in the next biennium estimated at $5 billion and little discretionary spending left to cut at the state level, municipal aid will be further slashed. “My concern is that town and Board of Education hasn’t done enough to anticipate cuts in municipal aid going forward. Instead of being proactive we’re being reactive.”

Barnes said that he has not received emails or calls requesting budget cuts, but noted that after last year’s budget discussions dragged on until late October, he thinks many people “still have a budget hangover.”

Mayor Cantor told We-Ha.com after the hearing that she thinks there’s not an outcry because residents understand the difficult task that the Council has balancing the quality of life in town with affordability.

Those who compare West Hartford’s mill rate with other communities need to compare the “equalized mill rate,” taking into account the percentage of appraised value to which the rate is applied, as well as the services (municipal water, town trash and recycling pick-up, etc.) the municipality provides. “We’re lower than Bloomfield and Wethersfield, and almost the same as Glastonbury,” Cantor said.

“We are well aware of the affordability and the property tax burden to homeowners, and we are always conscious and careful when making decisions to increase the budget,” Cantor said.

Many of the increases are not optional. “We have to pay for our pensions that were unfunded in the 90s. That’s something I wish we didn’t have to do. We have to pay the MDC ad valorem tax. We have contractual obligations,” said Cantor.

The town also needs to ensure that high quality employees can be recruited and retained with salary and benefit packages that are fair. West Hartford packages are neither high nor low, but in the middle, she said.

“We are very efficient. The schools are efficient and the town is very efficient,” said Cantor. As an inner ring suburb to the capital city, investment in pubic safety is also critical.

The Council will continue to focus on strategic planning for ways that the budget can be reduced in the long term, including diversification of revenue. “I would say MDC should be a user charge and not in the tax system,” Cantor said as an example.

“We will also continue to look at ways we can help stimulate development and redevelopment. We’re going to look at ways we can achieve more efficiencies throughout the organization,” said Cantor. She said there may also be some opportunities for cost savings by joining forces through regional capital investments, like a dog pound that can be used by multiple communities.

“Our goal is to preserve West Hartford’s quality of life, desirability. and vibrancy, in the most affordable and efficient way, and that’s our challenge,” Cantor said.

“I think people know what they’re getting, and they see it in their school system, public safety, public works. They see an incredibly high quality of life, and they see where their money is going,” Cantor said, and if that were not the case there would be more of an outcry. The inventory of homes for sale is at one of the lowest levels it has been, she said.

Property taxes are 87 percent of the town’s budget, Cantor said, “and people understand that they’re investing in the value of their homes and their quality of life.”

The Town Council has one more public hearing on the budget, on Wednesday, April 11, at 2 p.m., in Town Hall Room 314.

The Board of Education adopted its budget on Tuesday, and that $164.55 million budget is part of the overall town budget, which is scheduled for adoption on Tuesday, April 24.