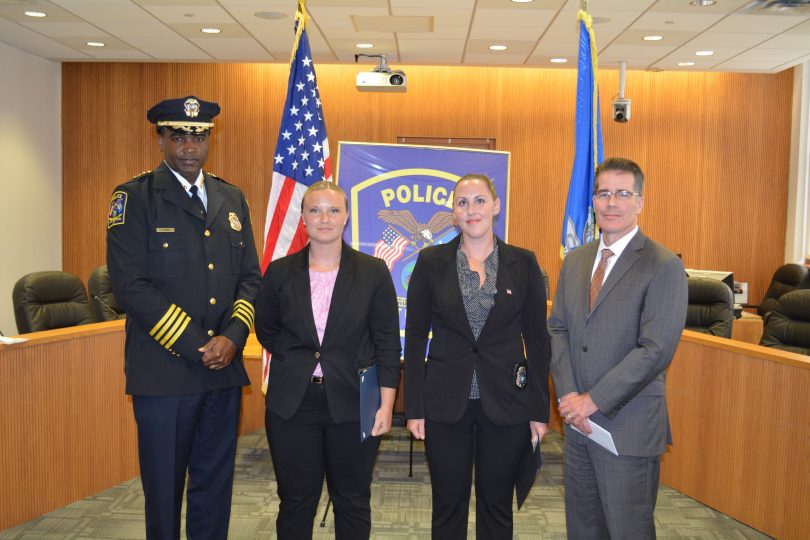 Off. Kelly Shimo, a Connecticut native, is a former member of the U.S. Marine Corps.

A 2012 graduate of WAMOGO High School in Litchfield, she enlisted in the Marines in 2012, completed basic training at Paris Island, marine combat training at Camp Lejune, and air support operations training at Twentynine Palms.

Shimo served as an air support operation operator at Camp Pendleton in Oceanside, CA, and attained the rank of sergeant. In 2014 she was deployed to Afghanistan and in 2017 she earned an honorable discharge from the Marine Corps.

Shimo has studied business administration at Park University and Arabic at San Diego State University, and has been working as a dog groomer in Torrington, CT.

She attended Manchester Community College and the University of Connecticut, where she earned a bachelor’s in general studies in 2013.

“The addition of these two recruits is much needed. These hires show our recruitment push for additional women and minorities is working, but we still need more qualified candidates,” Rocheleau said. “The West Hartford Police Department is a sough- after department, and in fact one of these recruits turned down another town for the WHPD job.”

Following their graduation, the new officers will begin the West Hartford Police Department’s 12-week Field Training Officer program under Rocheleau’s direction before being assigned duties on their own.