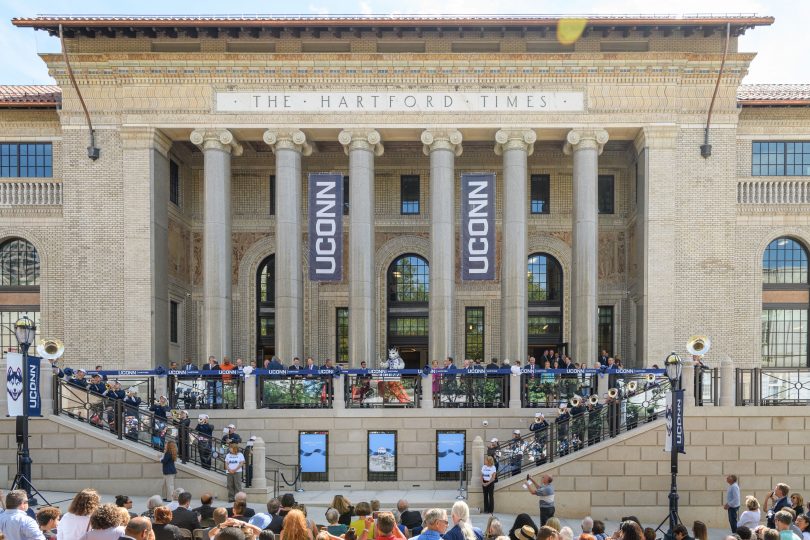 Jonathan the Husky leads the UConn Marching Band and the platform party onto the steps of the Hartford campus for the dedication ceremony on Aug. 23, 2017. (Peter Morenus/UConn Photo)

Crowds gather for the historic occasion as students and civic leaders join the UConn administration in the opening of the New Downtown Hartford Campus.

UConn has come home to Hartford.

After years of planning, the new downtown UConn Hartford campus opened Wednesday to the cheers of scores of onlookers who gathered at 10 Prospect St., where the campus is anchored at the historic Hartford Times building.

The move returns UConn to its roots in Hartford, where it had been located from its opening in 1939 until it moved in 1970 to West Hartford. It also helps UConn fulfill core aspects of its academic and service missions, while establishing a classic urban campus that complements the capital city and will become part of its fabric.

“UConn Hartford is not only brick, mortar, and steel. It is a living, breathing institution at the core of this city,” UConn President Susan Herbst said Wednesday at the event. “It will be part of the backbone of Hartford: a place of learning, engagement and discovery, and a vibrant part of this neighborhood and the capital city as a whole.

“This is one of the greatest, most momentous days in the 136-year history of UConn and an exceptionally proud moment for this city and our state,” she said.

Classes start Monday at the downtown campus, home to about 2,300 undergraduate and graduate students and almost 300 full- and part-time employees.

When combined with others enrolled in classes at the nearby Graduate Business Learning Center, UConn now brings more than 3,100 students to downtown Hartford businesses, cultural destinations and community organizations.

“The investment we have made in UConn’s new downtown campus is an investment in higher education, in our Capital City, and in our state’s economy,” Connecticut Gov. Dannel P. Malloy said. “Importantly, we are connecting students with all the city has to offer – museums, shops, restaurants, night life and sports venues– showing the next generation of young professionals how vibrant Hartford is becoming.”

Malloy joined Herbst and others Wednesday to cut the ceremonial ribbon and open the campus, where streams of people toured the renovated and expanded former Hartford Times building and shared space in the adjacent Hartford Public Library.

The project is a major component of the Next Generation Connecticut initiative supported by Malloy and the Connecticut General Assembly to expand STEM education and other offerings at UConn to drive economic growth and vitality throughout the state.

Construction included the addition of a new attached five-story building at the Hartford Times, while retaining the iconic Beaux-Arts façade of the 1920 structure.

In keeping with the neighborhood campus concept, the building has an exterior courtyard open daily to the public, and retail stores are expected to open at street level to enliven the streets and encourage public visits.

The Hartford Times operated in the building from its original construction through 1976, when the newspaper ceased publication. In that time, it hosted visits from four U.S. Presidents – Harry S. Truman, Dwight D. Eisenhower, John F. Kennedy and Lyndon B. Johnson – and was a landmark for the community even during the years when it sat unused.

“On the walls on either side of this portico,” Herbst told the crowd Wednesday, “there are four words written, dating to the opening of the building in 1920: Insight, inspiration, delight and pride. They will remain there because they also perfectly capture what this beautiful new campus will be now for our students, our faculty and staff, for the city and the state.”

The new campus comprises about 160,000 square feet in the Times anchor building; a nearby 34,500-square-foot building that UConn purchased at 38 Prospect St. to house the School of Social Work; and about 19,200 square feet in the Hartford Public Library in partnership with that organization.

In all, the campus includes more than 232,000 square feet of learning and community space, not counting the additional space that UConn already uses nearby for its Graduate Business Learning Center.

UConn Hartford will also be a hub of research, with many of its faculty using the campus as home base for intellectual exploration and collaborations with researchers across all UConn locations.

The Hartford campus will have a robust offering of courses that are expected to draw students from throughout the region. In addition to its existing graduate-level programs in social work, business and public policy, students will have their choice of studies in liberal arts and sciences, undergraduate business, urban studies, engineering and education.

“Today is a great day for the City of Hartford and for the State of Connecticut,” Hartford Mayor Luke Bronin said at Wednesday’s event.

“UConn’s beautiful new campus not only brings the historic Hartford Times building back to life, but brings thousands of students and faculty to downtown Hartford – adding tremendous energy and vitality to our Capital City, and bringing us closer to our goal of building a truly vibrant Hartford,” he said. “I’m deeply grateful to everyone who worked hard to make this vision a reality for UConn, for Hartford, and for Connecticut.”

Barnes & Noble also this week opened the new UConn Bookstore location on Front Street directly next to the new campus, where it will offer textbooks and general interest books, a Starbucks café, indoor and outdoor seating, a grab-and-go style food market, and a selection of UConn apparel and other merchandise.

Being located downtown is expected to offer new experiential learning opportunities for students. They will be closer to internships, service projects, and jobs in urban K-12 schools, government agencies, businesses, nonprofits, and other entities.

It also has spawned new relationships with several downtown businesses, including nearly a dozen restaurants and other locations that have signed on to accept Husky Bucks, a debit-style card issued by UConn for its students’ use.