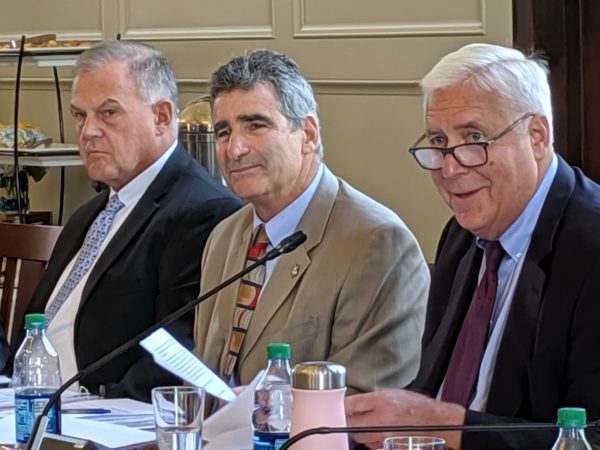 UConn President Tom Katsouleas said addressing the state’s unfunded pension liability is a key challenge to increasing research grants to the university, because it has driven the cost of fringe benefits significantly higher than at other universities. 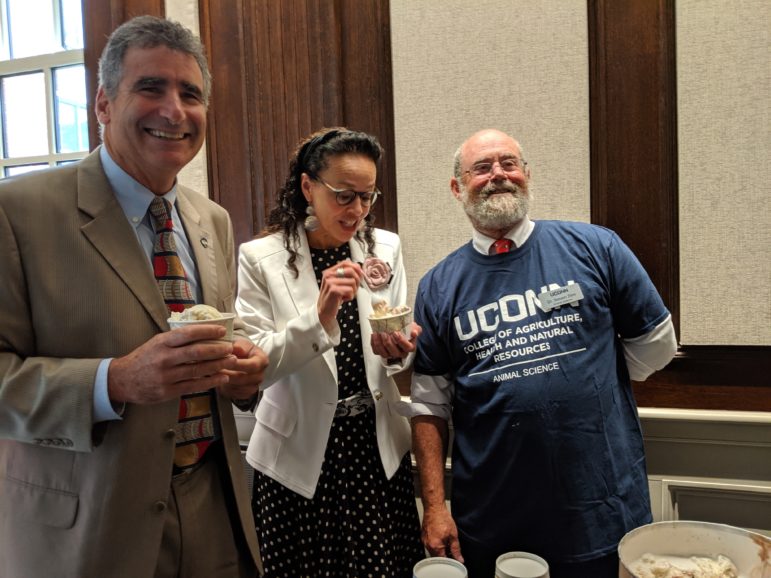 During a break in Wednesday’s trustee meeting, UConn’s new president Tom Katsouleas, left, enjoys lemon ice box pie ice cream from the UConn Dairy Bar with UConn board member, Andrea Dennis-LaVigne and Steven A. Zinn, head of the Animal Science Department. Katsouleas and the trustees were treated to the ice cream which was recently named the best from a university by the American Society of Animal Science. Courtesy CTMirror.org

The University of Connecticut’s new president, Thomas C. Katsouleas, got his marching orders Wednesday – a wide-ranging list of goals from working with the corporate community on workforce development to taking steps to mitigate the effect of the state’s burdensome unfunded pension liability.

As part of UConn’s effort to turn the university into an economic engine, the Board of Trustees also approved the establishment of a standing committee on research, entrepreneurship, and innovation on Wednesday – a step Katsouleas strongly supports.

“This committee serves a double purpose. One is to support the growth of research because fundamental research discoveries lead to innovation down the line,” said Katsouleas, whose first day at the university was Aug. 1. “This committee has also been charged with stepping up efforts on licensing and new ventures, so accelerating the transfer of discoveries from the university into social benefit.”

He said that universities are “research drivers, discovery institutes and, really, by the end of the 21st century the university took on a third role which is innovation engine.”

“I think the leading universities of the 21st century play all three of those [roles] and UConn wants to be one of those universities,” Katsouleas said, “so I think it fits in a very complementary way into who we are as a flagship public university and it also fits with our mission to serve the workforce and economic needs of the state.”

The goals call for Katsouleas to broaden research collaborations with the corporate community as well as educational opportunities for high demand occupations. The new president came  from the University of Virginia where he was provost and is himself an inventor and researcher. His goals also call for increasing student employment recruitment and philanthropic support.

Katsouleas is also charged with establishing a five-year strategic plan to enhance the university’s research productivity and to articulate a vision on how the university can play a larger role in the economic development strategy for the state.

When his appointment was announced in February, Katsouleas set an ambitious goal of doubling research dollars at the university over the next seven to 10 years, from $265 million to $500 million.

A key challenge to increasing research grants coming into the university, Katsouleas said Wednesday, will be addressing the state’s unfunded pension liability which has driven the cost of fringe benefits significantly higher than at other universities.

“When a faculty member goes out and writes a grant proposal and they have to hire staff and researchers, the fringe cost associated with that hiring is so much higher than peer groups,” Katsouleas said, “that when when they compete for those federal funds they are at a competitive disadvantage relative to our peer institutions. So they are less likely to win the proposal.”

“The risk of losing faculty is real and that would be the biggest harm to the university,” Katsouleas said.  “This is a top priority to mitigate this for our faculty.”

He said he will be working with UConn’s leadership team, the legislature and the governor to find solutions.

Katsouleas said his first focus will be on building the leadership team around him. “We have tremendous talent, but getting that in place is going be the key to achieving all the rest of the goals,” he said. “It has to start with that.”

Katsouleas must conduct a search for a permanent chief diversity officer and a provost, as well as working with the interim provost to make sure all dean openings are filled.

The new committee on research, entrepreneurship and innovation will include board members and may include experienced entrepreneurs chosen by the the board chair. The resolution notes that UConn received a $22.5 million gift from philanthropist and UConn alum Peter J. Werth to expand student entrepreneurship activities.

Katsouleas said he’d like to see a curricular path for students who want to pursue entrepreneurship.

Paul Mounds Jr., the governor’s chief operating officer and liaison to the UConn board, also told the board Wednesday that the governor will be naming a new chairman of the Board of Trustees by Sep. 1. He said the new chairman won’t be a current board member, but will be someone familiar with UConn.

Longtime board member Tom Ritter has been serving as board chairman since Tom Kruger, the former chairman, stepped down in April.