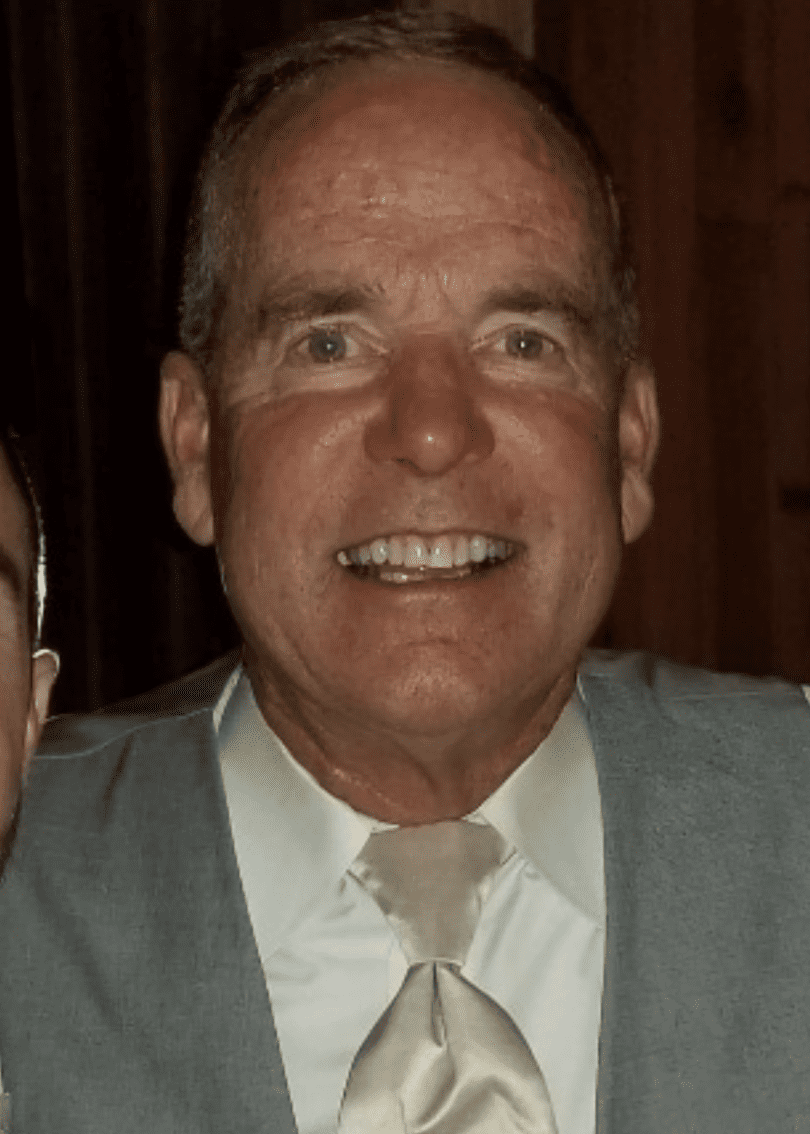 Richard Crowe was astounded by the number of calls and emails he received from people in the community after he announced his retirement. Courtesy photo 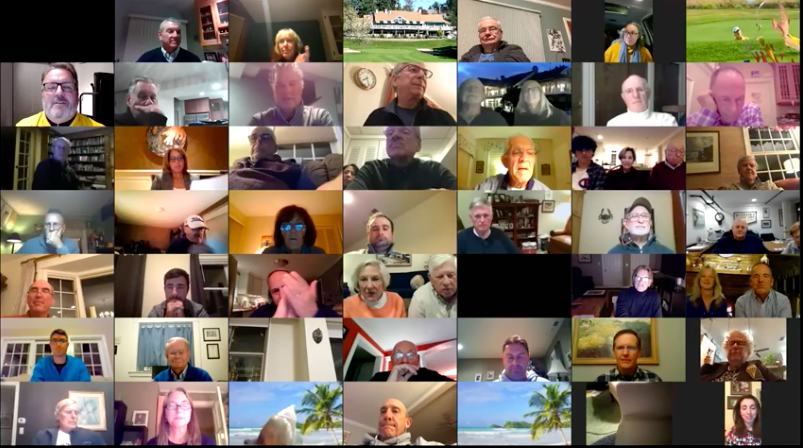 Rich Crowe’s retirement after 36 years as the Head PGA Professional at Rockledge Golf Course and Buena Vista was celebrated safely on Zoom, with dozens of friends, family and co-workers joining in to share memories. Everyone chipped in to donate in his name to the Pan-Mass Challenge to benefit the Dana-Farber Cancer Institute in Boston, a deeply personal cause for him. Courtesy photo

“The game of golf has been very good to me.”

So remarked Rich Crowe, who retired at the end of December after 36 years as the Head PGA Professional at Rockledge Golf Course and Buena Vista.

“I walked up the hill for the last time on Dec. 30. I had a little tear in my eye,” he said. “I will miss my community at Rockledge, but it was the right decision at the right time.”

He will be missed, too, according to the folks who worked with him, were coached by him, or spent even just a little time getting to know Crowe.

To send him off in style – and safely – golfers and co-workers from the town’s Department of Leisure & Social Services held a Zoom party, honoring Crowe. “It was mind boggling,” Crowe said. “It was so good. They did such a great job putting it together.”

At the celebration, he was acknowledged by Mayor Shari Cantor with a proclamation honoring him for all of his hard work through the years.

He still can’t seem to wrap his head around how many people reached out when they heard he was retiring.

“The number of notes and calls and emails from people when they found out I was retiring, it’s been unbelievable,” he added. “I thought if I heard from five people I would be lucky.” 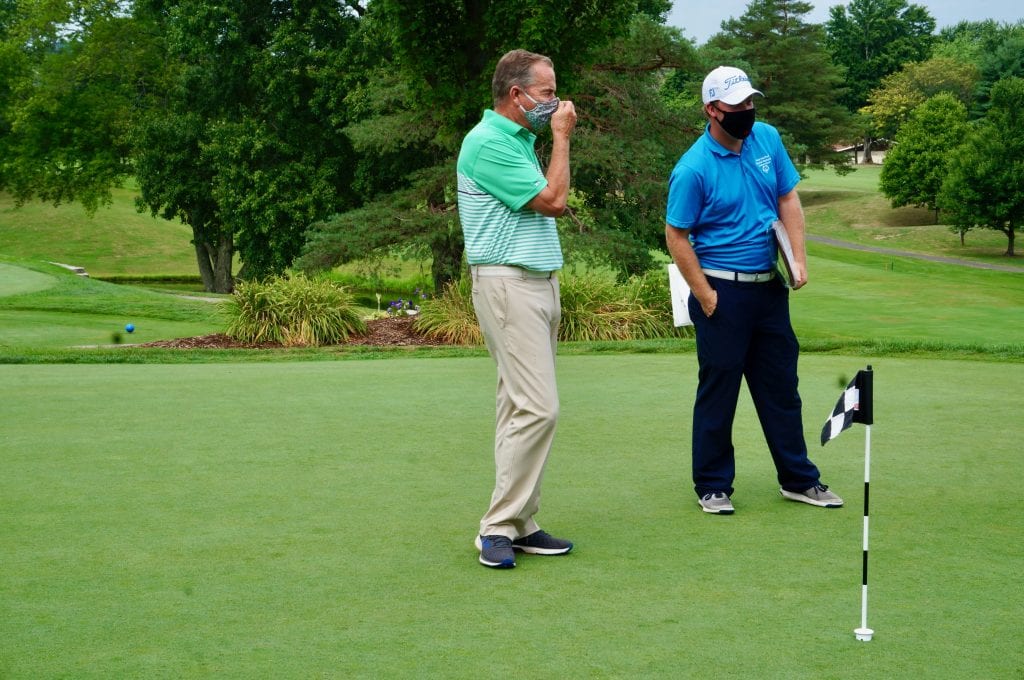 Rich Crowe at Rockledge Golf Club during a presentation of an award in July 2020 to another one of his long-time assistant pros, Kevin Smith. Photo credit: Ronni Newton

He is extremely grateful to the West Hartford community.

“Thanks for the opportunity to be able to run the business to the best of my ability, to help me provide for my family, and thanks for the love and the friendship. I’m still emotional. I can’t believe it’s been 36 years.”

“He is an institution, and more importantly, one of the nicest human beings on the face of the earth – a gentleman’s gentleman,” said Joe Waxman, who is the president of the Rockledge Men’s Golf Club. “He treated everybody like they were at a private club. When he ran a tournament, it was very professionally done.

And whether or not you were an A player or a D player, he treated you with the same respect.”

Golf has always played an important part in Crowe’s life. Taught a solid work ethic by his parents, Crowe, one of five siblings, started to caddy at 12, and in 1965, was working under the direction of John Murphy at the Country Club of Farmington.

“I cut my teeth in the business under John Murphy,” he said. “My dad had caddied there.”

Even at that age, “I knew that my aspiration was to be a club pro at a golf course,” Crowe said. “I also knew early on that I didn’t have the talent to play with the big players. Being a club pro has served me well. I owe John Murphy for taking me under his wing.” 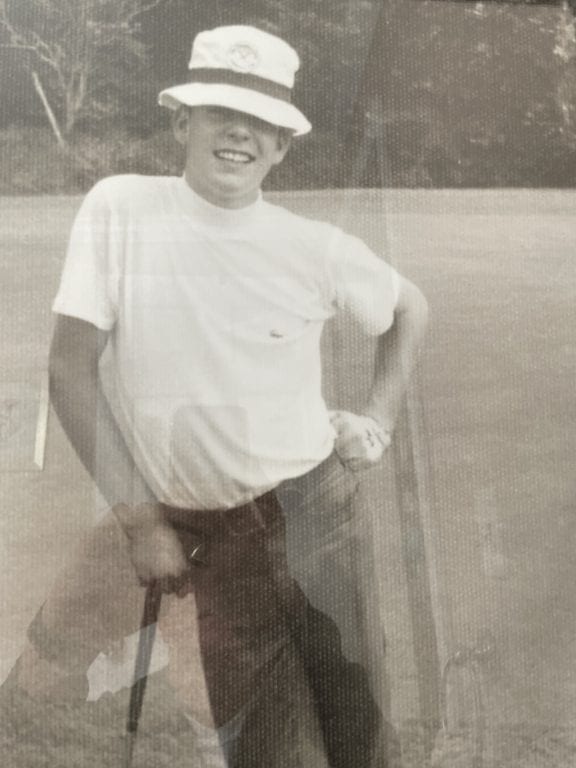 Rich Crowe at 14, two years after he started caddying. “I knew that my aspiration was to be a club pro at a golf course,” he said. Courtesy photo

Following his stint at the Country Club of Farmington, Crowe was hired as the head professional at Edgewood Golf Club in Cromwell. In the early 1980s, the course was purchased and turned into the TPC River Highlands, home of the tournament now known as the Travelers Championship. It was 1984, and Crowe was there, working as its head professional, when the PGA Tour teed off in its inaugural year.

But when the position opened to take over as head professional at Rockledge and Buena Vista, it was a chance of a lifetime for Crowe.

“Whether it was the first day or the last, I was always enthusiastic about going to work,” Crowe said. “It’s my second home. I’ve enjoyed being kind and servicing members every day. I want them to be here having a good time. I’ve always tried to be respectful and treat everyone the same.”

“His outstanding leadership is reflected in the facilities,” said Helen Rubino-Turco, director of Leisure & Social Services for the town.

“He set the bar high with all of his stakeholders – the grounds crews, clubs, the restaurant – everyone is treated with the same respect. It’s no surprise that Rockledge has been voted the best public golf course for 12 years straight” in the Hartford Magazine Reader’s Poll.

Even though he has lived in Berlin for 37 years, “It sounds corny, but the Town of West Hartford is a very special place,” he said. “Everyone that worked for me have all gone on and done very well for themselves. I’m really proud of who they’ve become.”

Under his tutelage, “We created a lot of clubs – men’s, women’s and the junior programs – and always with equal opportunities for everyone. Always,” Rubino-Turco said.

Over the years, his dedication has been noticed. In 1997, he was awarded the West Hartford Chamber of Commerce’s Noah Webster Award for outstanding community service for his ongoing support of the West Hartford Food Pantry and the town’s charity, The Town That Cares.

He’s also a devout supporter of the Dana Farber Institute in Massachusetts, where he took his wife, Sandy, for treatment for her leukemia. It was there that he became involved in raising money in the Pan-Mass Challenge, an annual bike ride that donates 100% of every rider-raised dollar to the cancer research and treatment at Dana-Farber. Despite Sandy’s losing battle to her disease in 2011, he still likes to participate in the annual fundraiser.

“Between my community in Berlin and at Rockledge, I’ve raised $283,000 for Dana Farber. And I’m keeping her memory alive,” he said.

“He was more than a golf professional,” Rubino-Turco added. “He was also a valued civic leader and a great friend. He’s always been incredibly supportive and a great cheerleader. They don’t get any nicer than him.”

Last year, Crowe remarried. He met Joan through a gentleman he used to caddy for years ago.

“During our first chit chat,” Crowe said, “we talked about our bucket list and she said, ‘I would love to get an RV and travel.’” Little did Joan know that that was also on Crowe’s bucket list.

His legacy will live on at Rockledge and he feels he has left it in good hands with Andrew Killoran, who worked as Crowe’s assistant for 22 years and has taken over the top spot.

“I felt like I learned from someone who was at the top of his field,” Killoran said. “It is always customer service first with him. He taught me how to treat people right.

“He wanted to give everybody the best golf experience. He’ll be known by generations to come. He touched a lot of kids. Statewide, everybody in golf knowns Rich’s name. He is an incredible role model and friend.”

“I know Andrew will continue on and take it to the next level,” Crowe said.

He is grateful for everything. “I will never forget what everyone in West Hartford has done for me. It’s been a team effort keeping the course the way it is. I’ve gotten a lot more credit than I deserve for what it is and what it has become.”

More information about Rockledge and Buena Vista golf courses can be found on the Town of West Hartford’s website.

A version of this story originally appeared in the March 2021 issue of West Hartford LIFE.