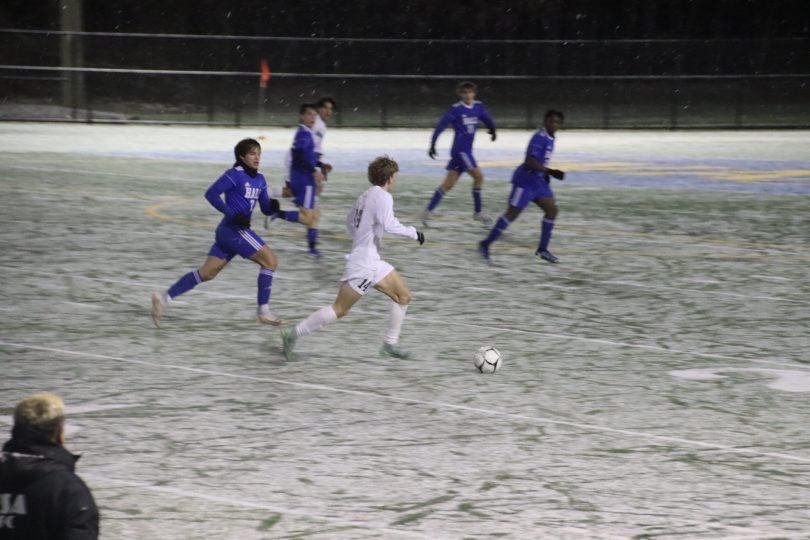 By any measure, the Hall boys soccer team has had an extraordinary season.

The Titans, under coach Zeke Seguro, have not lost a game (20-0-2), have won both the CCC West title and the CCC Tournament. Senior Lucas Almeida broke the career goal scoring record and now has more than 100 tallies for Hall. This weekend, they have the opportunity finish the 2022 season as the Class LL champion in a rematch with Greenwich at Dillion Stadium in Hartford.

“We work hard as a team and play as one community,” said senior co-captain Sam Sandler.

The return to the final also gives Hall’s players a chance to do something they feel they should have done a year ago. The Titans (then Warriors) lost in the semifinals to eventual champion Farmington on penalty kicks.

“We were all motivated after last year,” Colin Fairchild said. “Coming into the season we wanted to improve.” To get that chance they had to get through very tough Norwalk team in the semifinals – and that came in a game like no other the Titans had ever experienced.

The snow and slick conditions slowed down a side that uses speed as a weapon. There were emotional swings as the two sides battled through regulation with Hall seeing an opening goal by Sandler matched by two from Norwalk before Almeida tied things up in regulation. 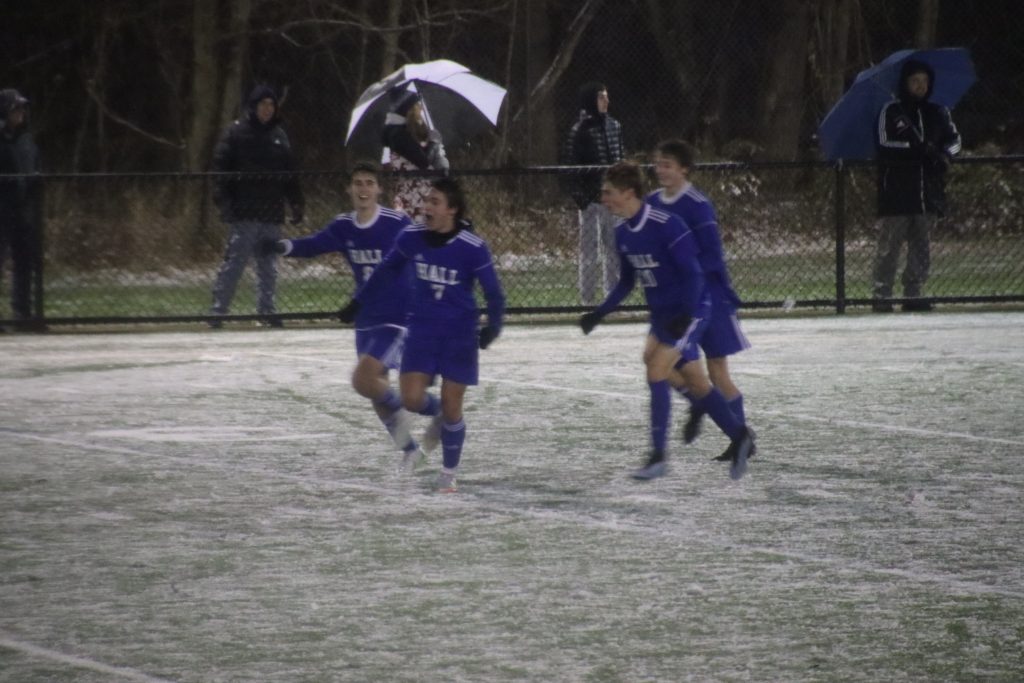 In overtime Hall scored first when John Hunt netted a cross from Almeida, but Norwalk would answer again, sending it to penalty kicks. “When they scored twice,” Sandler said, “ I said I don’t want this to end like that.”

Almeida would miss on Hall’s first penalty kick, but Sandler restored order when he converted. Both sides had their hits and misses and on Hall’s 11th try, Colin Fairchild did not convert. He then went to his brother, they embraced and Colin gave his brother a message. “I told him it was time to put the demon to rest,” Colin said of the loss to Farmington.

After Gabe Sisk banged in the sixth PK for Hall, and with the game on the line, the Bears’ final shot slid off the post, and Hall was on to the final with the 4-3 win (6-5 on PK’s).

“I went to my knees and cried with relief,” said Sandler, who joined the team as a junior. “I knew what it meant to Zeke [Coach Seguro] and I want this title to be his second.”

Tyler Fairchild made a beeline, sliding on his belly for the corner flag to celebrate with teammates. “We actually won, we’re going to Dillon (Stadium),” he said were his first thoughts. “From the moment we lost to Farmington in penalties, we knew we would go. It means everything.” 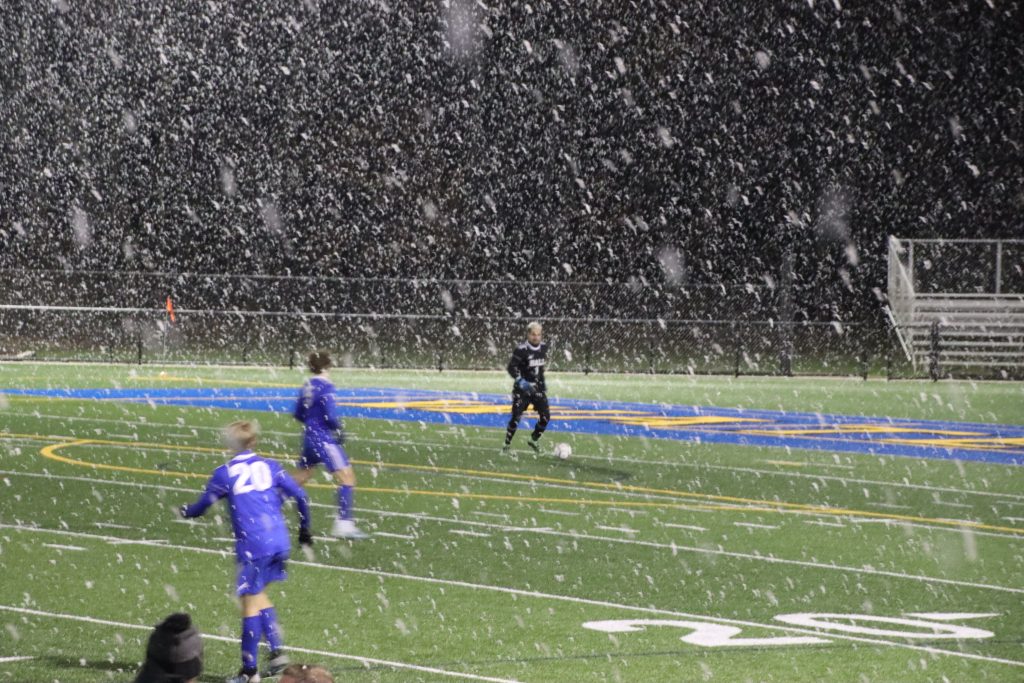 Tyler, along with his twin brother Colin and Lucas Almeida, were all on the roster of Hall’s last state championship team in 2019. They did not get the chance to defend that title in 2020 when the tournament was cancelled due to COVID-19 – and Hall had an unbeaten season underway. “It would feel great to go out winning both freshman and senior years,” Almeida said. Added the senior goalie Fairchild, who was on the roster but didn’t play in that last title game, “I knew at the 2019 whistle I wanted to play in a championship.”

Seguro has coached Hall for 28 seasons and despite having won just one state title has guided his clubs to nearly a dozen finals.

“There are so many good teams in Class LL, it is so hard to get to a final,” said the coach. “A win would mean a lot and vindicate what these guys have experienced these last 2 seasons.” Hall beat Greenwich 5-0 back in September, but Seguro said what matters now is the game ahead and that he wants to watch film and see Greenwich over the last several games. “That result means  absolutely nothing,” he said of the earlier matchup. “We  can only control so much and we will have to go out and play to our strengths. There is a reason they are there too … they are good.”

When asked what it is that has allowed his team to reach this point, Seguro reflected on their hard work and mentality. “Their determination, perseverance and  trust they have in each other. I think they are battle tested, it’s been a process and they have come together nicely. They have been locked in and taken it one game at a time all season, never looking past  anyone,” he said. His players understand what is at stake in the title game, and they know they are ready, and carry that little bit of extra motivation after last years heartbreaking loss in the semifinals.

“I’m thankful to get to finish what we should’ve done last year,” Sandler said. “It’s important to us to know not to be afraid and to come in with the right state of mind,” Colin Fairchild added.

Seguro said he hasn’t thought about what he’ll say to his team prior to the kickoff this weekend, but he knows they are hungry and capable of finishing the mission. “These kids want it. I think this group has worked hard to get to this point,” the coach said. “We try to establish a culture here and we’ve always been there at the door. Now it’s time to breakthrough and seize this opportunity.”

The CIAC announced Thursday that the Class LL final will he held on Saturday, Nov. 19, beginning at 6:30 p.m. at Trinity Health Stadium in Hartford (where the Hartford Athletic plays). That’s the same day the Conard and Hall football teams will meet in the Mayor’s Cup game, which begins at 1 p.m. at Conard.

Coming Thursday – a look at the special relationship between Coach Zeke Seguro and his players, and the goal beyond the game Seguro wants for all the young men he coaches.