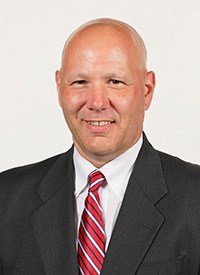 The current – and first ever – athletic director at the University of Saint Joseph in West Hartford has accepted a new role with the Coaching and Sport Studies program.

Bill Cardarelli, the first and only athletic director at the University of Saint Joseph (USJ) in West Hartford, will take on a new challenge after 26 years at the helm.

Becoming the inaugural director of Internships and Sport Studies in the undergraduate Sport Management and Promotion program in the fall, Cardarelli leaves behind an athletic legacy replete with accolades and accomplishments.

He began at USJ when the athletic department and the O’Connell Athletic Center were barely beyond the groundbreaking, and remained as a four-sport, Division-III college grew into a thriving 13-sport coeducational university. His extensive résumé also includes being a member of three Hall of Fame classes: the New Britain Sports Hall of Fame (2001), the New England Basketball Hall of Fame (2004), and the Connecticut High School Coaches Association Hall of Fame (2017).

While Cardarelli is leaving the USJ athletics department, he will join the department of Business Administration to teach courses and coordinate internships that provide students with the classroom and work experience they need for their future careers.

“Bill Cardarelli’s experience and network in the community will benefit our students both in the classroom and in their internship placements. We’re excited to see what our students can accomplish in the field with his help,” said Ken Bedini, Vice President for Student Affairs.

USJ will bring in Lou Izzi as Athletic Director, beginning in June 2019. Izzi is currently the director of Athletics at New England College (NEC). Throughout his tenure, student-athletes have experienced record-breaking team accomplishments and achieved the highest average cumulative GPA in the College’s last 20 years.

Izzi also brings to USJ his prior 22 years of experience as assistant athletic director at Johnson & Wales University in Providence, RI. During his time at NEC, he oversaw multiple facility and field renovations and grew the athletics department with three new varsity sports and new administrative and graduate assistant positions for each team.

Remarking on his new position, Izzi said, “I am honored and excited to become the next Director of Athletics at the University of Saint Joseph. I am thankful to President Free and Vice President Ken Bedini for giving me this incredible opportunity to join the USJ family, and to lead and grow the Athletics Department. I look forward to aligning Blue Jay athletics with the mission and strategic plan of the University by ensuring a highly competitive, enrollment-driven, and student-athlete centered athletics program.”