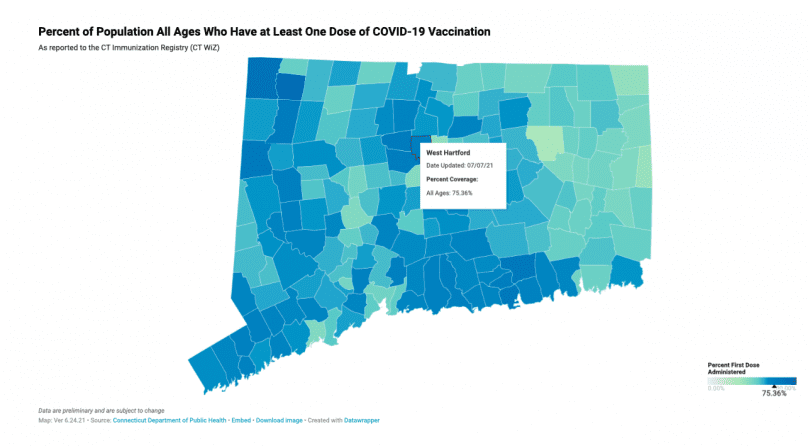 Percent of Population All Ages Who Have at Least One Dose of COVID-19 Vaccination. CT.gov

In West Hartford, 75.36% of people of all ages have received at least one dose of a COVID-19 vaccine.

Nearly 80% of adults in Connecticut have now been at least partially vaccinated against the COVID-19 virus. However, officials worried Thursday that pockets of low uptake may prove fertile territory for spread of the more contagious Delta variant.

“This damn Delta variant is really, really infectious and it’s just walking around downtown Bristol, trying to find somebody who hasn’t been vaccinated,” Gov. Ned Lamont said during an afternoon press conference at Bristol Hospital.

Lamont and his acting public health commissioner, Dr. Deidre Gifford, sought to keep attention focused on the ongoing vaccination effort as cases of the coronavirus dwindle in the warmer months.

It’s an area where Connecticut has led many other states. As of Thursday, more than 2.1 million residents had been fully inoculated against the virus. Gifford said 79.6% of adults had received at least an initial dose. During the press conference, Lamont said that a person in Arkansas was 10 times more likely to be infected by COVID-19 than someone in Connecticut.

“I think we’re smarter. I think we believe the science,” Lamont said when asked to explain the state’s high vaccination rates. “I think we were hit hard early, along with New Jersey and New York. I think that was a real wake-up call.” 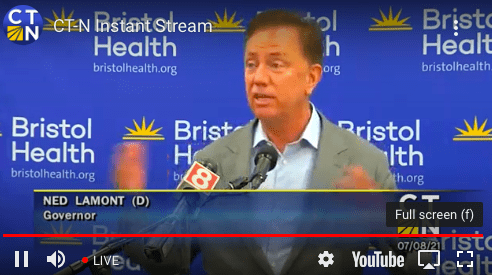 But the state’s generally high vaccine uptake masks pockets of Connecticut where residents have been more reluctant to take the shot. The governor singled out the town of Canaan where, according to the Public Health Department, more than 99% of eligible residents had taken a shot.

But vaccination rates lag in some of the state’s major cities. Bridgeport, Hartford, New Britain and Waterbury have yet to vaccinate 50% of residents. Several smaller towns in eastern Connecticut also have low uptake rates. Mansfield’s rate, for instance, sat at 34.8% on Thursday.

“We really want to eliminate any pockets of low vaccination,” Gifford said. “That’s because we are seeing around the world and elsewhere in the United States that the Delta variant is becoming the predominant variant.”

Although it has been identified here, Connecticut has not seen widespread transmission of the Delta variant. As of Thursday, there had been a cumulative total of 51 cases in the state. Gifford chalked that low number up to the state’s generally high vaccine uptake.

“It could become dominant in these pockets of undervaccinated people,” she said. “We know it’s more transmissible and we know it probably causes more severe disease. We want to make sure we don’t have any areas that are vulnerable to a return of COVID in the fall.”

Gifford said it’s up to public health officials to educate residents to overcome hesitancy. She tried to dispel some concerns Thursday. She said the vaccine should not be considered untested. Hundreds of millions had been vaccinated and serious side effects were rare and outweighed by the more common risk of the coronavirus. Gifford also said there was no evidence to support a persistent claim that the vaccine affects fertility.

“In fact, if you’re thinking of getting pregnant, it’s probably a really good idea to get the COVID vaccine because we know that women who are pregnant are at risk for more severe COVID disease,” Gifford said.

Lamont and Gifford also highlighted promotional efforts aimed at encouraging younger people to take the vaccine. Children between 12 and 15 years old, the most recently-eligible age bracket, had the lowest vaccination rate at 48%. They were followed by young adults between 18 and 24. About 58% of that age group has been vaccinated.

Vaccination rates are not broken down on a town-by-town basis in the same way, but according to data reported by the state Thursday, 75.36% of all West Hartford residents – including those who are under 12 and not age eligible yet – have received at least one COVID-19 shot. Among those ages 12-15, 70.65% have received at least one shot, and for all other age groups well over 80% have initiated vaccination.

Vaccination breakdown by age group for West Hartford, as of July 7, 2021

During the press conference, the administration announced residents who had won concert tickets through the state’s “Rock the Shot” campaign in which vaccinated people could enter to win premium concert tickets.

Lamont even channeled a morning radio DJ and called one of the winners live during the event.

“Hey, Joe, this is Ned Lamont. I’m governor of Connecticut here with a few of my closest friends from Bristol Hospital and the entire Connecticut press corps, just want you to relax. What I really wanted to say is, congratulations! You won the contest, you’re going to Luke Bryan. You know about this?”

“I do. Apparently now I do. That’s awesome,” Joe said.