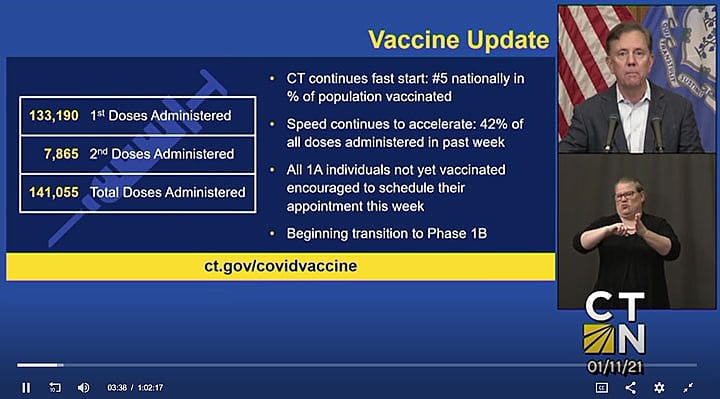 The transition to Phase 1B of vaccine distribution in Connecticut will begin next week, and health care providers will begin reaching out to people over age 75 this Thursday for advance registration, with clinics expected to begin Jan. 18.

An estimated 140,000 COVID vaccines have been administered and the state is getting ready to shift to the next phase of vaccine distribution for residents who are over the age of 75.

“Some of the nurses have still been a little hesitant. Here’s your chance,” Gov. Ned Lamont said Monday in a plea to health care workers. “Book your appointment now. Stay at the front of the line.”

Lamont said they’re going to “make sure there are no vaccines left on the shelf at the end of the day.”

The allocation subcommittee of the Vaccine Advisory Committee is expected to meet Tuesday and finalize its recommendations for which groups are in the next phase of vaccinations.

Lamont said starting next week they are going to begin opening up the vaccination process to people over the age of 75 who don’t live in a nursing home or assisted living facility.

“They may be about 5% of our population, but they are 60% of the fatalities,” Lamont said during his press briefing.

He said there will be online registration starting next week so those in that age group can sign up online and make an appointment. Advance registration will begin Thursday with health care providers contacting people to set up appointments beginning Jan. 18.

“I’ve gotta tell you there won’t be room for everybody on day one so you’re going to have to be patient,” Lamont said. “And for those of you who are exhausted with the Internet and online we are going to have a telephone booking system.”

Patrick Charmel, president and CEO of Griffin Hospital, said they’ve mined data to make sure they get to those 75 years and older and get them the vaccine.

“After the 75-yea- olds it will be people with some health care risks and frontline essential workers,” Lamont said.

The Allocation Subcommittee of Lamont’s Vaccine Advisory Board will meet at noon Tuesday to make a recommendation to the full board on which groups should be included in Phase 1B and Phase 1C.

A number of residents of specific groups like cancer patients who are under the age of 65 and advocates for those with intellectual and developmental disabilities have asked to be included in the next phase of vaccine distribution.

“Adding more groups just means other people get pushed to the back of the line,” Lamont said. “It’s not like I’m increasing my vaccine capacity.”

Josh Geballe, Lamont’s chief operating officer, said the Allocation Subcommittee is weighing all these questions and will make a recommendation Tuesday. He said the CDC has put out a list of “high-risk medical conditions” that should be considered a priority. Geballe said that includes cancer and chronic kidney disease.

But within these priority groups there’s questions to be answered who goes first.

“We also strongly urge the state to prioritize those individuals who receive long-term services and supports in their own homes and communities,” Nora Duncan, state director of the AARP Connecticut, said in a letter to Lamont. “For years, the long-term care system has been shifting away from institutional care in nursing homes to home and community-based settings (HCBS). Here in Connecticut, nearly two-thirds of long-term services and supports are provided in home or community settings. For these reasons, we strongly urge you to prioritize people receiving care in these additional settings to receive a COVID-19 vaccine and the staff who provide care.”

Geballe said they are not considering uncompensated caregivers a priority at this point unless they are 75 and older.

“It’s strictly based on age to start with here and then we’ll continue into other populations,” Geballe said.