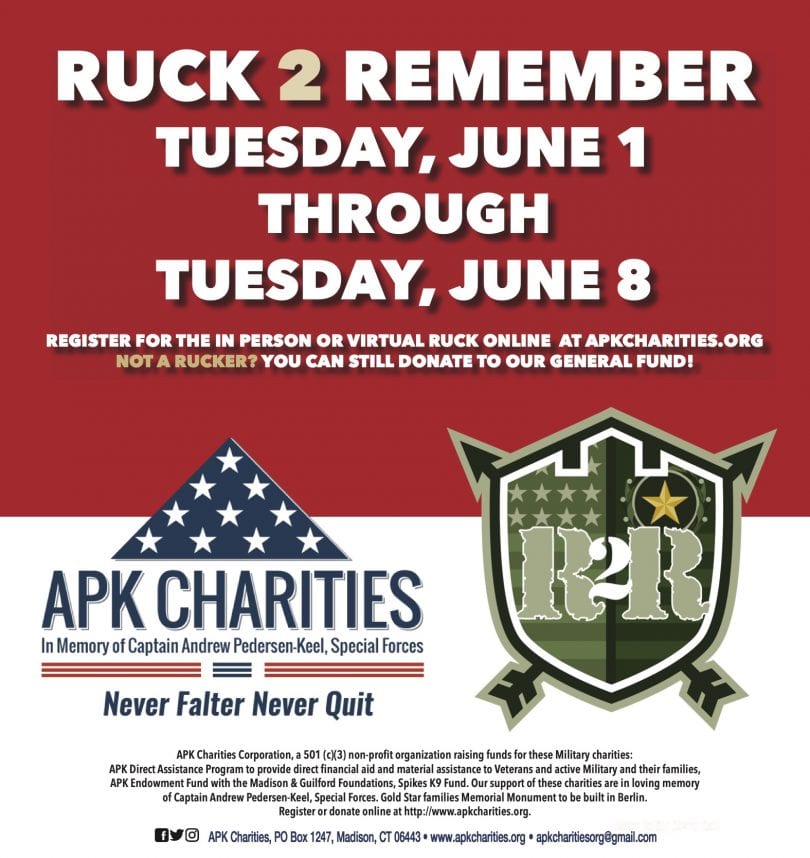 On Tuesday, June 1, Will Reese will set out on “Ruck to Remember (R2R) – a 380-mile trek from Avon, CT, to Arlington, VA, to raise awareness and funds for APK Charities. Reese, who launched R2R in 2019, this time will be joined by hundreds of active and retired Military from all around the world who will all don “ruck-sacks” – military backpacks – for the 7-day march, which will culminate on Tuesday, June 8.

APK Charities is named in memory of Cpt. Andrew Pedersen-Keel, a Connecticut nature who attended Avon Old Farms School in Avon, CT, before going on to attend West Point, the United States Military Academy located in upstate New York. Pedersen-Keel was serving in the 1st Battalion, 3rd Special Forces Group (Airborne) when he was killed in action in Afghanistan in 2013. According to Reese, the team of soldiers will “ruck” to the 911 Memorial, and finish in Arlington National Cemetery where Cpt. Pedersen-Keel is laid to rest.

“APK Charities is a nonprofit whose goal is to keep Andrew’s name alive in perpetuity,” said Andrew’s parents, Helen and Bob Keiser-Pedersen. “The goal of R2R is to honor America’s fallen heroes and raise much-needed funds to support veterans in need,” they added.

The community is invited to support the R2R mission by virtually rucking 38 miles (the average miles walked per day) at a cost of $50 per person. Those participating virtually can “ruck” at their convenience.

For more information on the R2R mission, to get involved, and/or to make a donation, visit www.apkcharities.org.