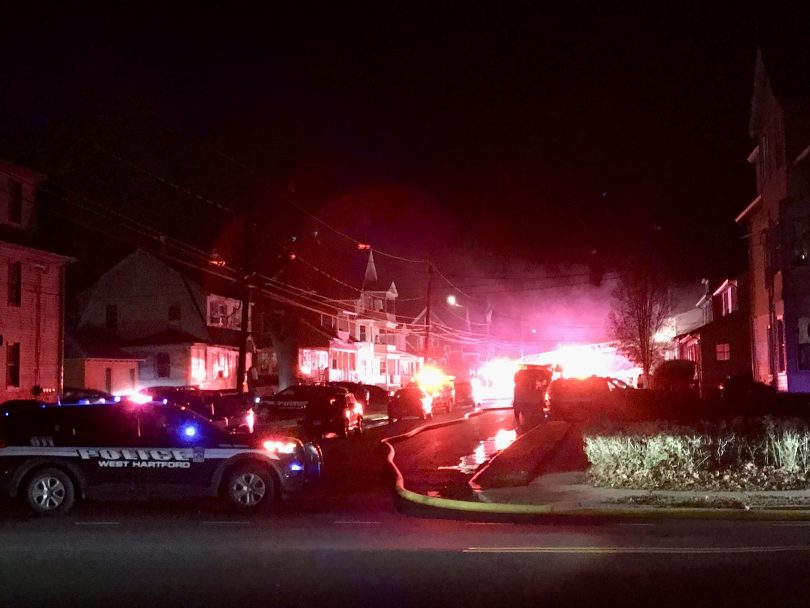 West Hartford fire and police units on scene of a house fire on Thomas Street. Photo courtesy of Kelsey Olguin

The West Hartford Fire Department responded to fire in a single-family house on Thomas Street Wednesday night, and said Friday morning that a person who was removed from the dwelling has died. [Updated, Nov. 25, 11:10 a.m.]

A person who was found inside a single-family home at 22 Thomas Street that caught fire Wednesday night and was removed from the residence by responders who administered advanced life support has died, West Hartford Fire Chief Greg Priest said Friday morning.

The victim was the lone occupant of the home, officials said. The injuries suffered by the individual, who was transported to the hospital, were “non-survivable” and the victim succumbed to those injuries, Priest said.

The cause of death has not been officially determined, pending an investigation by the office of the Chief Medical Examiner, Priest said.

The name of the victim and other details are being withheld at the request of the family, he said.

The West Hartford Fire Department and West Hartford Police Department arrived at the scene of a reported fire in a single-family home at 22 Thomas Street on Wednesday night in about four minutes, and said that a victim who was removed from the residence was taken to a local hospital with life-threatening injuries.

Public Safety Dispatch was notified at 9:09 p.m. Wednesday via a third-party monitoring service that reported a “lifeline or pendant activation” indicated a couch fire inside the West Hartford residence.

Police arrived at the scene, followed by the first fire unit at 9:14 p.m., and fire and smoke were visible coming from the front of the home. Multiple units simultaneously began to extinguish the fire and search the interior for any occupants, Priest said Wednesday.

Responders had been made aware that no one had been able to successfully communicate with an occupant of the home after the fire had been reported, and they had been advised that the person’s last known location was inside the home.

Firefighters located the victim shortly after beginning their search, and removed the individual, who appeared to be in critical condition with life-threatening injuries, from the residence. Priest said fire department paramedics, assisted by police and American Medical Response, immediately began advanced life support treatment, and the victim was transported by ambulance to a local hospital.

The cause of the fire is being investigated by the West Hartford Fire Marshal’s office under the direction of Assistant Chief/Fire Marshal Robert Grimaldi, as well as West Hartford Police and the Connecticut State Police Fire and Explosion Investigation Unit.

Priest noted that a fire investigation involving a fatality “is a methodical and time-consuming process for investigators,” with the involvement of multiple agencies before a final conclusion on the cause is released. “We also try incredibly hard to respect the wishes of the family left behind who is experiencing a tragic loss,” he added.

No responders were injured due to the fire, which was brought under control by 9:35 p.m. Wednesday, and quickly extinguished, Priest said.

The residence is not habitable and agencies are providing assistance to family members.

Most of West Hartford’s fire companies responded to the scene and the Hartford Fire Department provided mutual aid while units were committed.

“West Hartford Fire greatly appreciates the assistance of the West Hartford Police, AMR, our mutual aid partners, CSP FEIU and offers our thoughts and sincere best wishes to the occupant, occupant’s family, and others affected by this serious incident,” Priest said.

“While not necessarily a factor in this incident, the West Hartford Fire Department would like to remind everyone that smoke alarms and carbon monoxide alarms should be installed and maintained on every level of your dwelling and in the immediate vicinity of sleeping areas,” Priest said. “Please keep yourself and your family safe now and during this holiday season.’