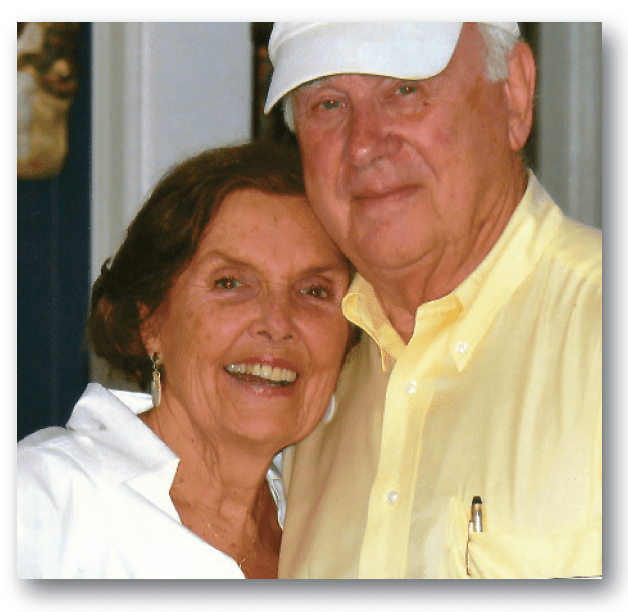 Faced with a major loss, the Walsh family has come together to support The Ron Foley Foundation in its mission to raise money and awareness in the fight against pancreatic cancer.

By Ronni Newton
As seen in West Hartford Magazine 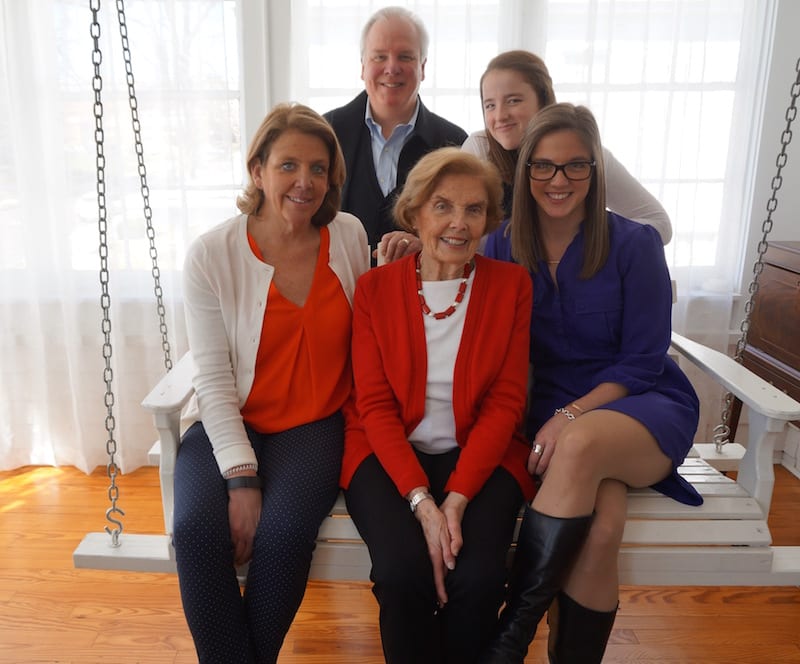 It may be hard to figure out how the various members of West Hartford’s extensive Walsh clan are related, but what’s not hard to see is the way they have come together as a unit to work on behalf of the Ron Foley Foundation.

Nearly four years ago, the Walsh family lost one of its members when patriarch Bob Walsh died of pancreatic cancer. His widow, Marie, and several other family members including daughters Nancy Walsh and Lisa Howard, and granddaughter McGuire Kelly, are now an integral part of the Ron Foley Foundation. Bob’s son Jim Walsh helps by donating. All are hopeful that their support will help the Foundation in its mission to both raise awareness about pancreatic cancer and fund medical research, educational initiatives, and patient care.

“He wasn’t feeling well. They didn’t place it,” Marie recalled about her husband Bob’s stomach pains in the late summer of 2012.

Nancy said that her daughter McGuire, who was a college student at the time, left in early August for a semester abroad. “When she left him, she got teary,” Nancy said.

“Maybe it’s an Irish thing, but I was teary when I left. I thought he could be gone when I got back,” McGuire said. It was just a premonition. She had no idea her grandfather had pancreatic cancer, and he hadn’t even sought medical help at that point.

Later that same August, Nancy went to visit McGuire as well as another daughter, Delaney, who was also studying abroad in Europe. When her return flight landed at Logan Airport, she had a message from her Marie. “Your father doesn’t feel good,” Marie had said.

Doctors had been trying to diagnose Bob’s illness for about a week at that point, and a few days later concluded he had pancreatic cancer. “The progression was really quick,” Nancy said. Lisa recalled that she had held a big celebration for the 18th birthday of her younger twins (she has two sets) on Aug. 11, 2012.

“My father was there, we had lots of singing. We all had a ball,” she said. She and her husband and kids left for a short vacation after the party.

“We got a call from my brother, and he said dad wasn’t feeling well. We thought it was the lobster, or that he had food poisoning,” Lisa said.

The family has no history of pancreatic cancer, and has been told it’s not hereditary. They really had no knowledge of the disease, which according to the Ron Foley Foundation has the worst five-year survival rate – 6 percent – of all cancers. “We had no idea of this at all. That’s why we’re so involved now,” Marie said.

When Bob went to the doctor, the family never even thought about pancreatic cancer. “There’s not a lot of information even on the Internet,” McGuire said. Less than 20 percent of those diagnosed survive even the first year, with most cases already far advanced because there’s no early detection. “It’s such a dreadful thing to see. He was so vital,” McGuire said.

Jim said that his dad, who rarely complained and hated to be sick, worked up until the very end of his life. “We were standing out in front of the house on Friday when dad came home,” Jim said. “He said, ‘We made it.’ He died the next week.”

Marie said that her husband’s decline was so quick that he didn’t even make it to the initial oncologist’s appointment. It was scheduled for the day after what ended up being his memorial service. She tried to tell herself that at least she didn’t have to see him suffer for long.

“He worked all week with that pain, but if he died any other way, he would have been pissed,” Jim said. The stomach pains he had were a classic symptom, but no one went looking for pancreatic cancer until a blood test revealed that Bob had pancreatitis.

“We were all so close, but Nana – they did everything together,” said McGuire. Her grandmother’s life changed dramatically, with virtually no time to prepare.

Pancreatic cancer is such a terrible disease, McGuire said. As she and the rest of the Walsh family learned, by the time someone experiences symptoms the disease has progressed so far that it’s essentially a death sentence. Finding the Ron Foley Foundation was one of the best things to come out of the tragedy of losing her grandfather, McGuire said. There’s so little awareness of pancreatic cancer, and nationally so little support and research dollars spent on the disease that the work of this one non-profit in West Hartford, CT, has an incredible impact.

Nancy had heard something about Ron’s Run for the Roses, the Ron Foley Foundation’s signature Kentucky Derby-themed fundraiser, and after her father’s death she attended the event. The next year she joined the committee. McGuire and Marie were soon a part of the organization, too.

“Going to the event and planning it are two different things. It’s really a small group of people who do things,” Nancy said. Everyone rolls up their sleeves and gets involved. It’s like being part of a therapy group, too, she said.

McGuire said that everyone on the Ron’s Run for the Roses committee has been impacted by pancreatic cancer and they share the same goal. They tell their stories and listen, and at the same time, work to increase the impact of the organization by recruiting more volunteers and raising funds. McGuire said her cousin Katie in Maine got her company to donate, and her own employer, ProHealth, is now a sponsor.

“I was so blown away by what they did and how they did it,” said Lisa. McGuire recruited her to join the committee, and Lisa, a veteran of many large local fundraisers, is now in charge of putting the auction baskets together for Ron’s Run for the Roses. Jim said that his family has been involved with many other charitable organizations, but said the Ron Foley Foundation is different. No one has an “honorary” role; they are all doing things. “They are a group that really wants to help people who have been affected by pancreatic cancer.”

Marie not only volunteers for the Ron Foley Foundation, but she’s also become everyone’s friend. “I bring Nana to everything,” McGuire said. “Everyone wonders where she is if she’s not there. They all want to be her friend, on Facebook and Instagram, too.”

“The Ron Foley Foundation is such a wonderful organization. You want them to succeed in what they’re doing,” said Marie.

Jim said there’s such a fear factor surrounding pancreatic cancer. “They say it’s not hereditary so you don’t have to worry,” he said. But after someone in your family or a friend gets it you realize what an awful disease it is. “The Ron Foley Foundation is trying desperately to help find a test, a cure.”

“When I was away and heard about my grandfather I couldn’t believe it could happen so quickly,” McGuire said. “We put men on the moon but we can’t cure this.” She’s hopeful that funds raised by the Ron Foley Foundation will have a real impact.

According to the Ron Foley Foundation, since its founding in 2012, Ron’s Rescue Fund has raised more than $116,000, all of which is distributed directly to pancreatic cancer patients and their families through relationships with hospitals in Connecticut, the rest of New England, New York, and New Jersey.

“One hundred percent of the money goes to families that are in need,” Lisa said of Ron’s Rescue Fund. “They’re struggling, their lives fall apart.” Younger and younger people are getting pancreatic cancer, she said. According to the Ron Foley Foundation, mortality rates for pancreatic cancer in the United States are actually increasing.

Lisa said that she’s proud to be part of an organization that gives the money it raises directly to the people who are suffering. “You can have a check the next day,” said Nancy. Unfortunately, all too often that money needs to be used for funeral expenses.

“I don’t know whether they’ve adopted us or we’ve adopted them,” Ron Foley Foundation Executive Vice President Jennifer Loughran said. She said that the Walsh family has become a core part of the organization in the past several years.

Loughran said she’s especially pleased to have a young person like McGuire, who is in her mid 20s, getting so involved. “We really have to start focusing on that generation. They’re our future,” she said.

“They’re quiet, they always listen, and then they come up with great questions, great ideas,” said Ron Foley Foundation President Barbara Foley. “I didn’t know Bob, but given his family I’m sure he was a sweetheart,” said Foley.

Barbara Foley held the first Ron’s Run for the Roses in 2009 in her backyard. There were 75 guests at the Kentucky Derby Day party, held in memory of her husband, Ron Foley, who died of pancreatic cancer in 2005, just days before his 60th birthday. In 2015, there were more than 450 guests at the event, now held at Folly Farm in Simsbury. To date more than $1 million has been raised.

For more information about the Ron Foley Foundation, visit www.ronsrun.org.