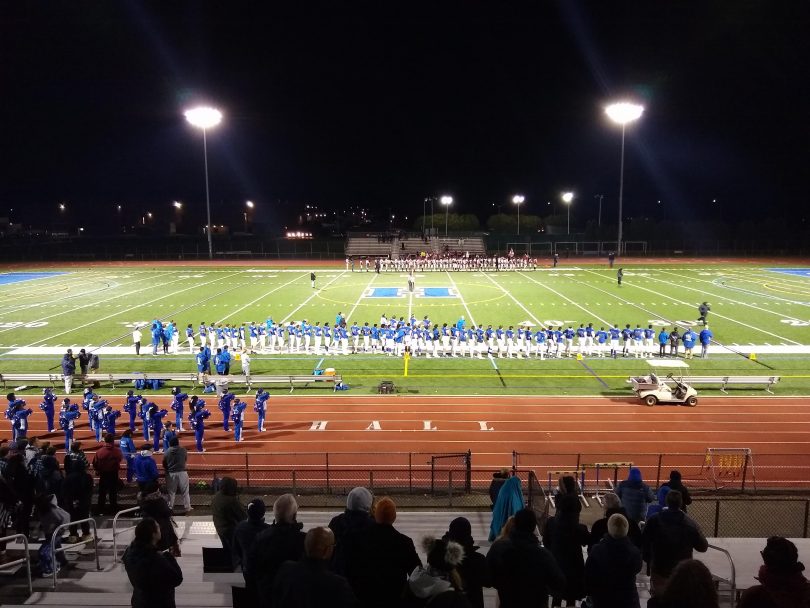 Hall football wins its fourth consecutive game by three or more possessions and improves to 6-2, moving up to No. 8 in the CIAC Class LL point rankings.

The Hall football team might be one of the state’s best-kept secrets, and Isaiah Lizardi is okay with that.

Entering Friday night No. 9 in the Class LL point rankings, the junior running back said the team’s goal is to “quietly” finish in the top eight and clinch a state tournament berth.

With a 49-28 win over Manchester Friday night in West Hartford, the Warriors (6-2) find themselves in the No. 8 spot as of Saturday morning with two games remaining.

Lizardi led the effort offensively with three rushing touchdowns in the first half and a second-half pick-six. Hall’s defense brought pressure on third downs and caught three interceptions to shut down Manchester’s drives.

“I’m happy with them,” said Hall head coach Frank Robinson. “They’re resilient. A couple huge, big plays that Manchester had, we just bounced right back and, offensively, went down and scored. I think answering was a big thing, and I’m happy about that.”

The biggest play of the night came on special teams as Da’Jaun Banks returned a kickoff 76 yards for a touchdown, answering a Manchester (3-5) touchdown as the third quarter expired.

Red Hawks quarterback Treyshawn West scored a 5-yard rushing touchdown and the team added a 2-point conversion to make it 35-28 with 1.4 seconds remaining in the quarter. Banks’ return pushed the margin back to two scores, 42-28.

While opposing teams key on Lizardi on offense and special teams, he credited Banks as even more of a kick return threat.

“It was big because, unfortunately, some people don’t see him as a threat,” said Lizardi. “They might have a higher standard for me than him, but in reality, it’s even. … I think he’s a better returner than me. He has better vision, and when they kicked it to him, I knew it was gonna be a problem.”

Consecutive penalties put the Red Hawks inside their 5-yard line to start their next drive before Lizardi intercepted a pass and took it 8 yards to the end zone with 11:47 left to extend the lead to 49-28.

Lizardi capped off a 40-yard drive with a 15-yard touchdown to put the Warriors ahead 7-0 with 8:24 left in the first quarter.

After returning the ensuing kickoff to Hall’s 40, the Red Hawks got into the red zone with a 33-yard completion from Treyshawn West to Joseph D’Amora. West found Jamil Gonzalez on a 6-yard screen pass two plays later, and Manchester completed a 2-point conversion to take an 8-7 lead at the 6:06 mark.

Matt Keller found Gabe Salomons on a 28-yard touchdown pass to put Hall ahead 14-8 at the 3:18 mark. The Warriors took a 21-8 lead on Lizardi’s second touchdown, scoring from 3 yards out 15 seconds into the second quarter.

Salomons intercepted a screen pass to give Hall possession near the seven-minute mark, and Lizardi finished the 57-yard drive with a 39-yard touchdown to put the Warriors ahead 28-8 three minutes before halftime.

The Red Hawks took advantage of a short field, as West found Jahkye Thompson on a 17-yard swing pass to make it a 28-14 game at the intermission.

Manchester drew within one score on a 68-yard completion from West to Jayden Colon. The Red Hawks failed a 2-point conversion, trailing 28-20 with 6:23 left in the third quarter.

Taking over at Manchester’s 48, Lizardi carried the load for the Warriors, getting them to the 1-yard line where Matt Keller finished the drive on a QB sneak to go 35-20 at the 2:39 mark.

The Warriors recovered an onside kick, but a fumble on a trick play gave the Red Hawks the ball as they scored near the end of the quarter to make it a one-possession game for the last time.

Hall will host Wethersfield (6-2) in a marquee matchup Friday night at 7 p.m.