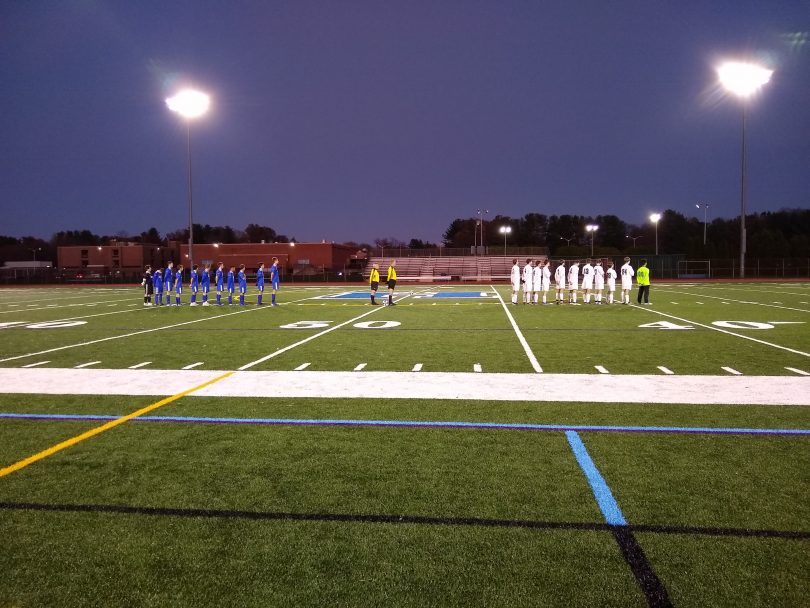 Hall earns its 12th victory of the season in dominating fashion.

While it was Senior Night for the Warriors, Hall’s dynamic junior duo took charge offensively against Southington.

Evan Jones and Drew Seguro each tallied two goals and two assists to lead the Hall (12-1-2) boys soccer team to a 7-0 win over the Blue Knights (2-10-3) at Chalmers Stadium in West Hartford Friday night.

Liam Wilson scored first on a header off a cross from Seguro with 32:48 left in the first half.

“It was good,” said Wilson. “Always good to start off strong and get the first goal of the game, but in the end, it was a good team performance and good by every player.”

Seguro added two more goals in the first half – both assisted by Jones – to give the Warriors a 3-0 lead at halftime.

“I thought we played extremely well,” said Hall head coach Zeke Seguro. “I’m very pleased with the ball movement, the sharing of the ball. We looked sharp at times, but it’s one game. We’ve gotta keep it going.”

Less than nine minutes into the second half, Jones found the net himself, while Drew Seguro notched the assist at the 32:26 mark.

Among the depth players to come off the bench in the second half, freshman Lucas Almeida made the most of his playing time, tallying assists on each of Hall’s last three goals.

Almeida set up Jones, who beat the Southington goalie on his far side with a shot to the top-right corner of the net, to make it 5-0 with 24 minutes left. Ryan Zimmerman increased the margin to 6-0 six minutes later.

Looking to score a goal of his own Almeida’s shot bounced off the right post, but Patrick Sullivan sent home the rebound opportunity at the 13:25 mark.

“It’s always great because I love the guys here,” said Wilson of his four years playing for Hall. “They’re basically like a second family to me, and I spend pretty much every minute with them. We love each other and we all fight each other down to the last minute of every game.”

Zeke Seguro praised his senior class for their contributions to the program after the game.

“I couldn’t be more proud of what they’ve done,” he said. “They’ve been tremendous. I admire every single one of them. They’ve committed four years to make this a better program, and I couldn’t ask for more. I just thank them for everything they’ve done, and I realize it’s not the final day – we still have more to accomplish – and we’re hoping that we can build off today.”

Hall will host crosstown rival Conard (8-4-3) Monday night to close out the regular season. Game time is set for 6:30 p.m.