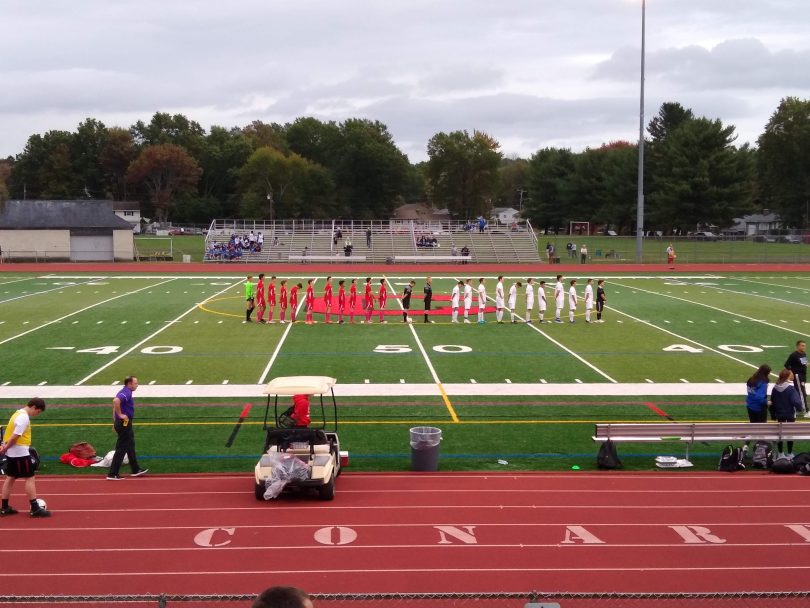 Hall improves to 7-1 at the halfway point of the season after a strong performance against crosstown rival Conard.

The Hall boys soccer team got off to a quick start, scoring twice in the first nine minutes to defeat crosstown rival Conard 4-0 Monday night at McKee Stadium in West Hartford.

Evan Jones (2 goals) and Drew Seguro scored early to set the pace for the Warriors.

Jones collected a through ball and lobbed it to the far side of the Chieftains (3-3-2) goal at the 37:50 mark to put the Warriors (7-1) up 1-0. Drew Seguro scored to double the lead six minutes later.

Jones added a goal with 30:42 to play in the second half. Less than two minutes later, Daniel Herz sent a cross into the box that went into the net off a Conard defender.

“I’m happy with the way we played,” said Hall head coach Zeke Seguro. “I was happy with our ball movement, and we were fortunate to get a couple early goals – which definitely helps because this is usually a lot tighter – and then we caught a break at the end, an own goal that was unfortunate for them, fortunate for us.”

For Conard, a younger and smaller team, playing from behind against Hall was no easy task. The Warriors controlled play throughout, rarely allowing the Chieftains past midfield. Hall’s midfielders forced a slew of offensive pressure by quickly moving the ball to forwards as well as capitalizing on their size against Conard’s smaller lineup.

“Obviously the early mistakes cost us and completely took us out of the game plan we put forward to begin with,” said Conard head Coach Adam Linker. “What we were trying to do is reorganize as quickly as possible. Those two goals cost us right away. We started to settle in a little bit towards the latter part of the first half, and from there, our halftime was just trying to regroup.”

Halfway through the season, Zeke Seguro says he likes his team’s progress but wants to see continual improvement moving forward.

“We’re at the halfway point already, and you’ve gotta start making strides in the right direction because all the good teams are going to be doing the same thing,” he said. “Conard’s a very good team, and we just happened to catch them with a couple quick goals.”

Linker said his team needs to brush off the loss – albeit against their crosstown rival – and move on quickly.

“As this team needs to learn, ‘How do you bounce back when you get punched in your mouth?’” he said. “We can’t go back and relive that moment. We gotta go and prepare for the next game. … In the end, it’s just one of the 16 games.”

The Chieftains will travel to Bristol Central Thursday afternoon. The Warriors will play Lewis Mills on the road Friday afternoon.