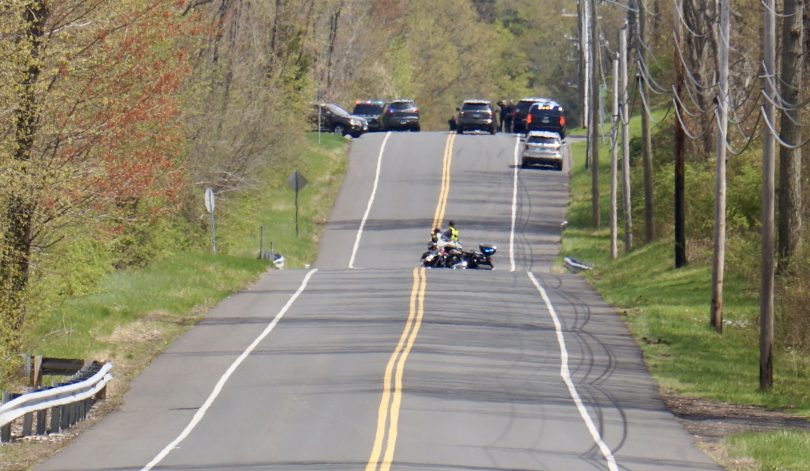 West Hartford and Hartford Police on the scene on Simsbury Road Monday afternoon where a suspect in a Waterbury homicide was taken into custody following a pursuit. Photo credit: Ronni Newton

[Updated, 4:30 p.m.] A man suspected in the murder of a Waterbury woman Monday morning was apprehended in West Hartford, following pursuit by Hartford and West Hartford police, and a handgun has been recovered.

West Hartford Police have identified the suspect arrested Monday in connection with a Waterbury homicide as Luisito Dejesus, 33, of Hartford.

Dejesus has been charged by West Hartford Police with third-degree assault, second-degree breach of peace, interfering with an officer, engaging police in pursuit, unsafe movement of a stopped vehicle, and first-degree reckless endangerment.

Several of the charges issued Monday by West Hartford Police were in connection with a previous incident for which there was a felony arrest warrant outstanding.

Information about additional charges to be made by Hartford and Waterbury police is not yet available.

A mugshot has not been made available, and no information was provided regarding bond for Dejesus.

West Hartford Police said they were notified by Hartford Police that officers were in pursuit a vehicle thought to be involved in a robbery and murder that occurred early Monday morning in Waterbury, where an adult woman was found bleeding in a driveway.

Assistant Chief Robert McCue said that information had been developed about the suspect, and Hartford Police had been notified that the suspect had ties to the Greater Hartford area, and were on alert.

Fox61 reported that Hartford Police saw the suspect on Barbour Street, and began to follow him.

Keen-eyed @HartfordPolice traffic officer spots this mornings #waterbury homicide suspect get in his vehicle on Barbour St. A well-controlled pursuit is initiated through several towns. Spike strips did their job. In custody safely, no injury to suspect or officers. #citycops

The suspect, who was driving a blue SUV, headed west on I-84, and exited the highway in West Hartford around 1:30 p.m., followed by Hartford as well as West Hartford officers.

The pursuit ended when the suspect was taken into custody on Simsbury Road, just east of Mohegan Drive.

According to McCue, there were no injuries, property damage, or crashes that occurred during the pursuit, and there is no danger to the public.

The name of the suspect has not yet been released, but Sgt. Daniel Moffo told members of the media that the suspect was also known to West Hartford Police who had an outstanding warrant for his arrest.

A firearm, which police believe was thrown from the suspect’s vehicle, was recovered on Sedgwick Road just west of the intersection with South Main Street, McCue said.

Waterbury Police were on their way to West Hartford to process the weapon and vehicle.

The incident remains under active investigation.