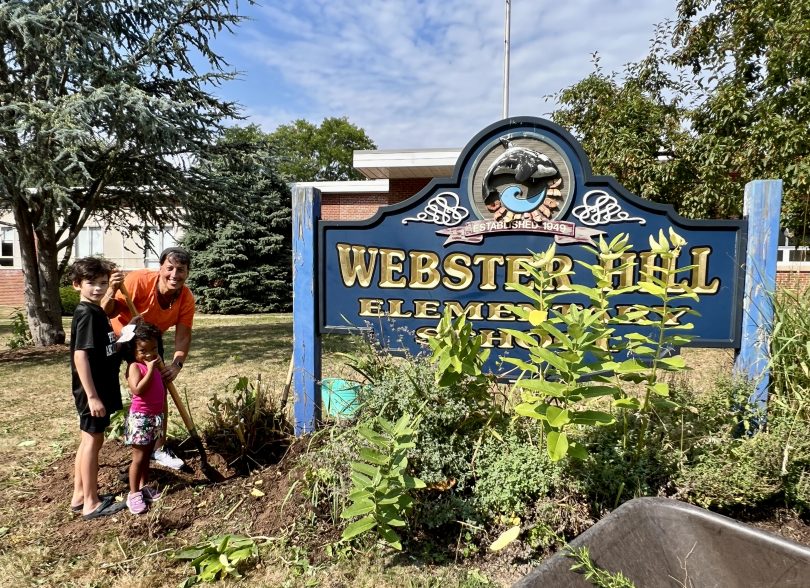 Members of the community helped with weeding and other tasks getting the gardens and courtyard at West Hartford’s Webster Hill Elementary School ready for the new school year. 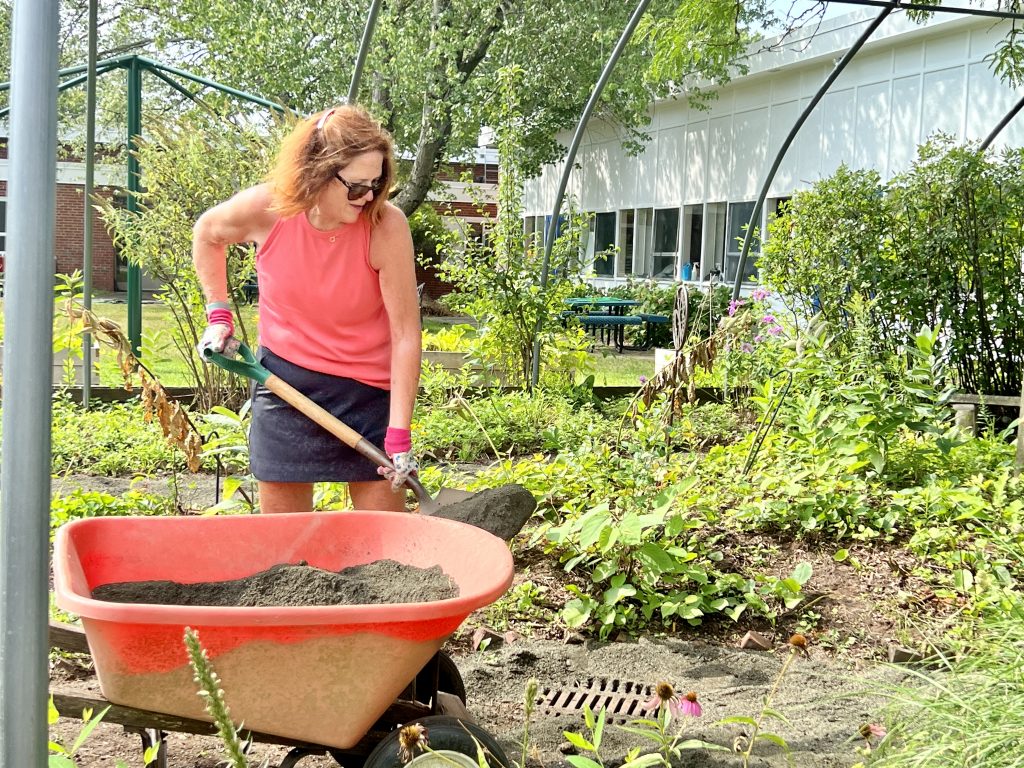 Webster Hill parents, students, teachers, and other members of the community gathered for a few hours on a hot and sunny Friday morning for the important task of renewing the school’s Living Courtyard and other gardens.

“I like to garden and we’re a lover of Monarchs,” said Pre-K teacher Beth Cannone, who was overseeing the weeding, spreading of mulch, and other tasks, and had drafted fellow Pre-K teacher Randi Leopold to help lead the efforts. “We’re interested in reviving this not only for Monarchs, but for pollinators in general.”

Webster Hill has long been known as the “butterfly school.” In the late 1990s, with the assistance of a grant and some very hard-working parent volunteers, unused and neglected space in the school’s courtyard was transformed. The “Living Courtyard” was inaugurated in 1997 as a science and research center, and an environment to attract and nurture Monarch butterflies was created. 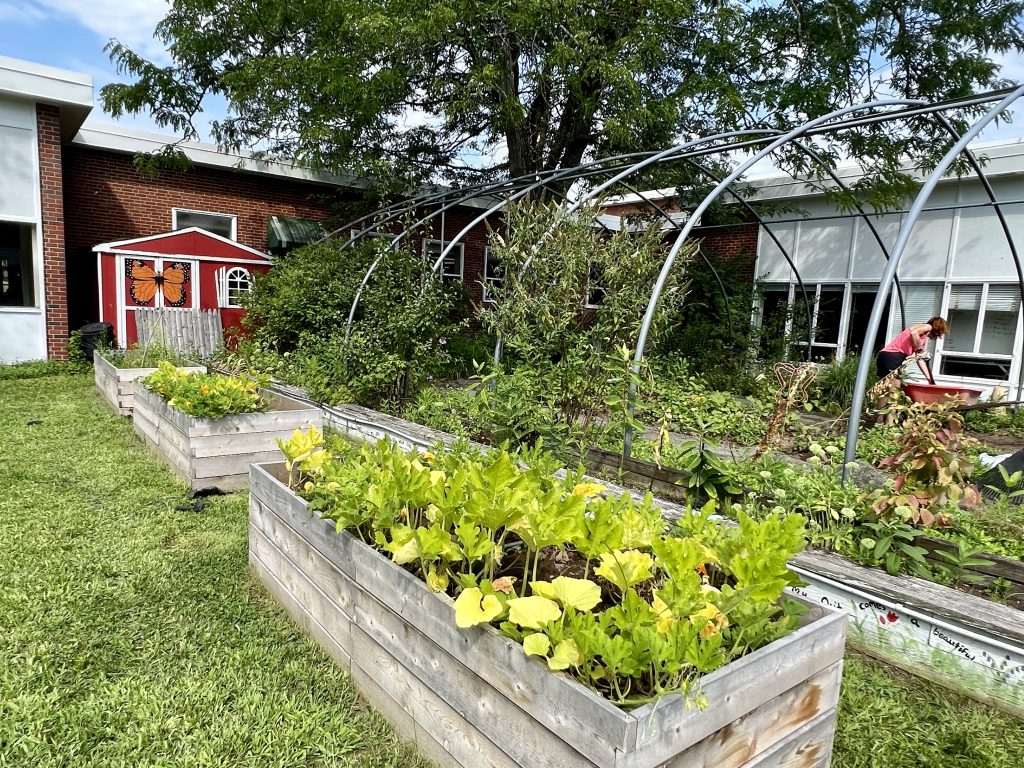 Living Courtyard at Webster Hill. The metal supports had been part of a netted butterfly enclosure. Photo credit: Ronni Newton

For many years Monarchs would lay their eggs in the milkweed that was planted in the courtyard and elsewhere around the school, and over the summer, families, as well as staff, would care for the caterpillars that hatched from the eggs, feeding them milkweed. Once school resumed, all would watch in wonder as the caterpillars formed chrysalises in their small enclosures and became Monarch butterflies which were then placed in the courtyard’s special enclosure.

The butterflies were tagged by students and the school held a butterfly release each September, with students at all grade levels gathering and singing a special song as the net that covered the butterfly house was pulled back and the iconic orange and black Monarchs headed on their journey to Mexico. 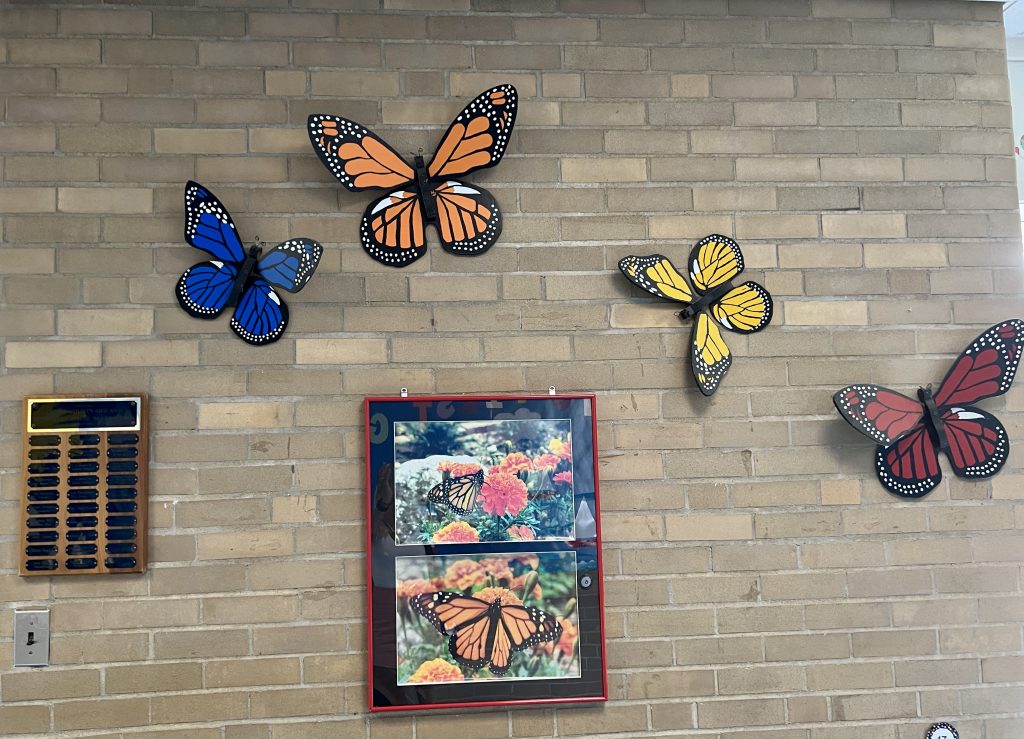 But COVID interfered and the gardens became somewhat overgrown, the net over the butterfly house had long outlived its life expectancy – and at the same time the Monarchs have become scarcer, with the population declining by as much as 72% over the past decade. This summer Monarchs were placed on the International Union for Conservation of Nature (IUCN) Red List of Threatened Species as “Endangered,” and the health of the species is also being closely monitored by the U.S. Fish and Wildlife Service.

The Webster Hill community is looking to do their part to help the Monarchs and other pollinators as part of the educational experience. 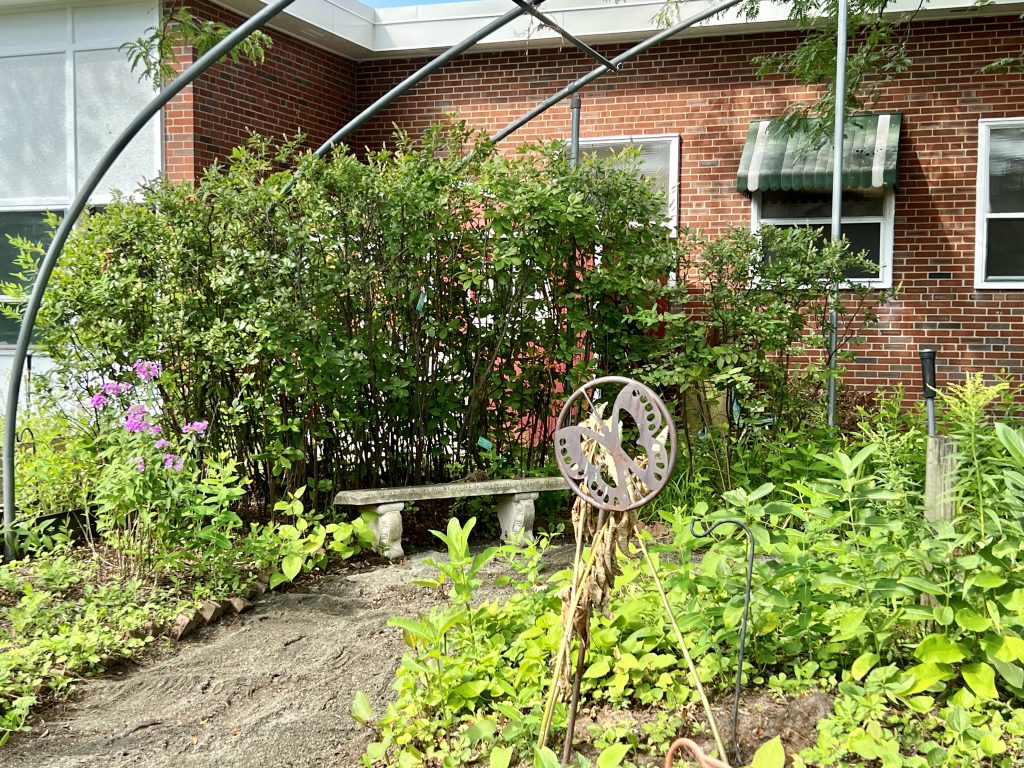 “Now that we are on the other side of the intense quarantine/COVID season, we are refreshing our focus on raising Monarchs and involving our students,” said Principal Melissa Behrens.

Cannone said courtyard has great educational value for students at all grade levels. “They can explore, see the insects and pollinators in their habitat.”

While there were just a handful of caterpillar eggs found at the school this year, and a replacement net for the enclosure would cost roughly $10,000 and is not being installed at this time, Cannone is hopeful that Monarchs and other pollinators will be attracted to the area. New plantings will also be installed in the courtyard in the next few weeks with the help of student and staff members of the Webster Hill EGG (Environmental Global Group), to help restore the “living habitat,” she said. 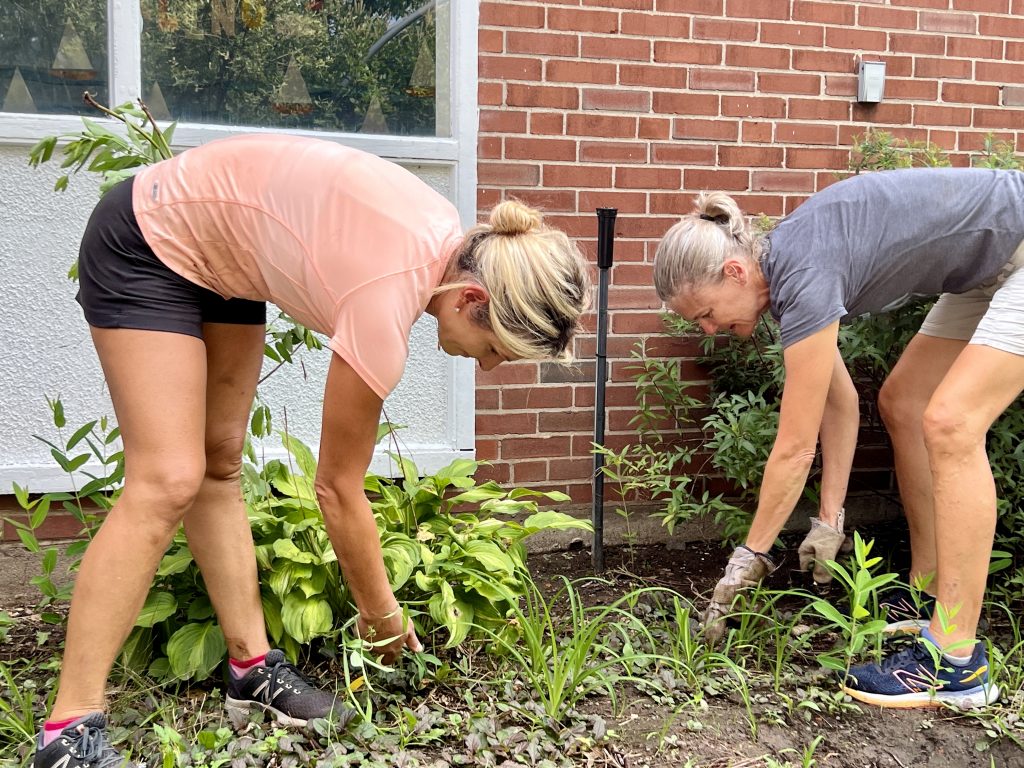 Parents and teachers were among those who helped with the weeding of the Webster Hill courtyard on Wednesday. Photo credit: Ronni Newton

“There’s been a lot of hope and excitement,” said Cannone. “I’m hopeful, and there’s a lot of teamwork going on.”

Sherry Feinglass, a former teacher and curriculum specialist at Webster Hill who is now a member of the Foundation for West Hartford Public Schools’ Board of Directors, and retired Webster Hill first grade teacher Jill Nova, were among those who helped with weeding on Friday. 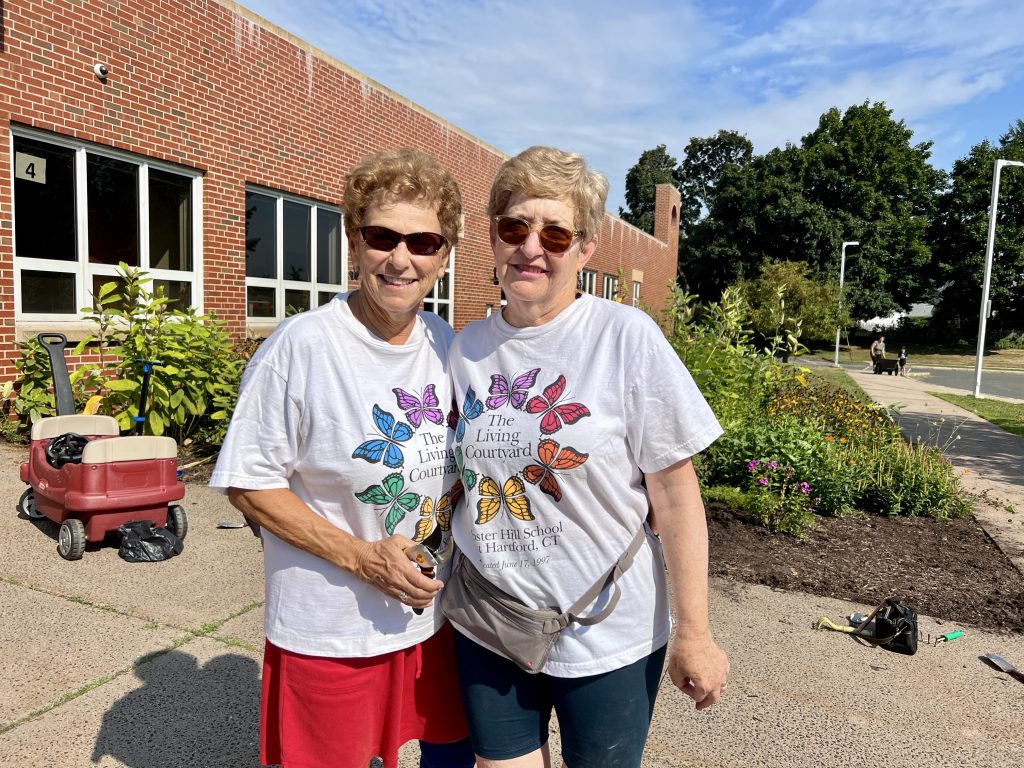 Jill Nova (left) and Sherry Feinglass were teachers at Webster Hill when the Living Courtyard and butterfly house opened in 1997. Wearing vintage t-shirst from the opening, both helped with the renewal on Friday. Photo credit: Ronni Newton

Feinglass was teaching third grade when the Living Courtyard first opened in 1997, and said at the time the PTO collected donations and every teacher in the school was given a tagged plant that was then placed in the courtyard. Some of those plants remain 25 years later, with tags more visible once the weeding progressed, as a testament to the history of the courtyard.

Feinglass said she has also urged the school to apply for a grant from the Foundation to help support the Living Courtyard. 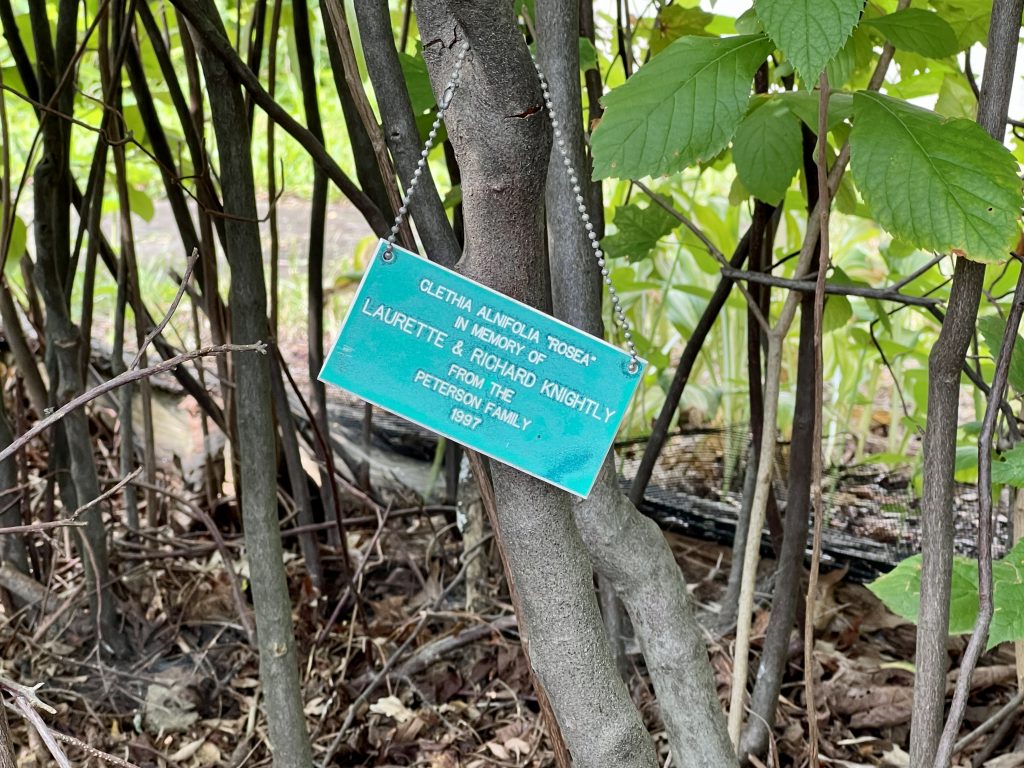 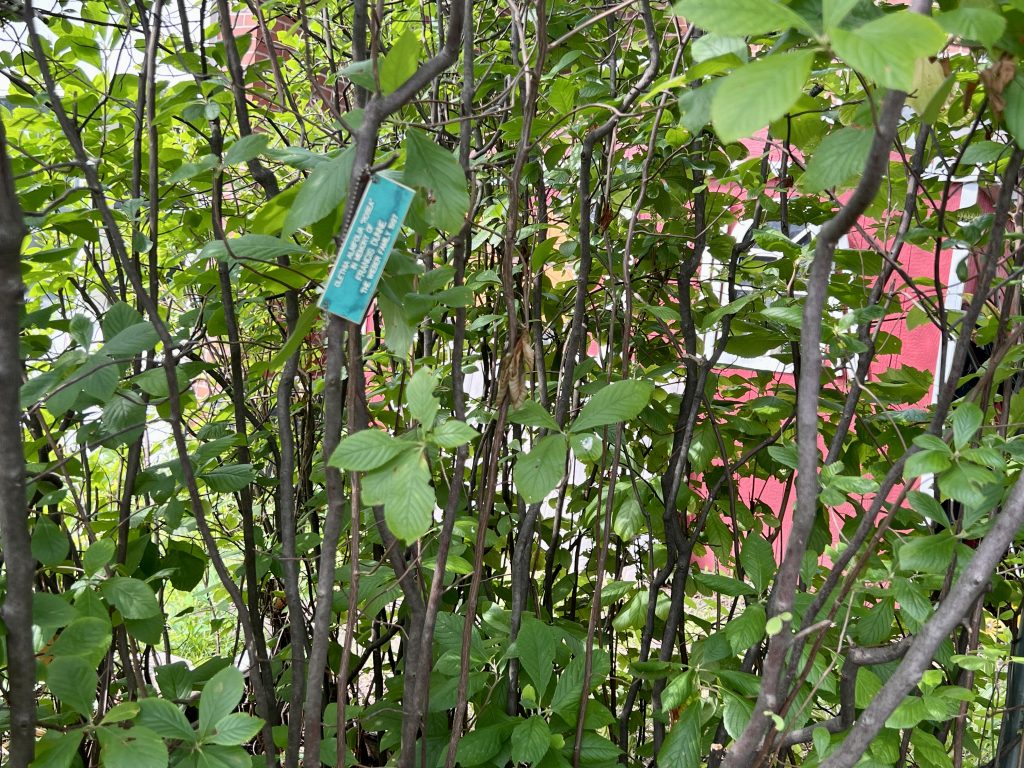 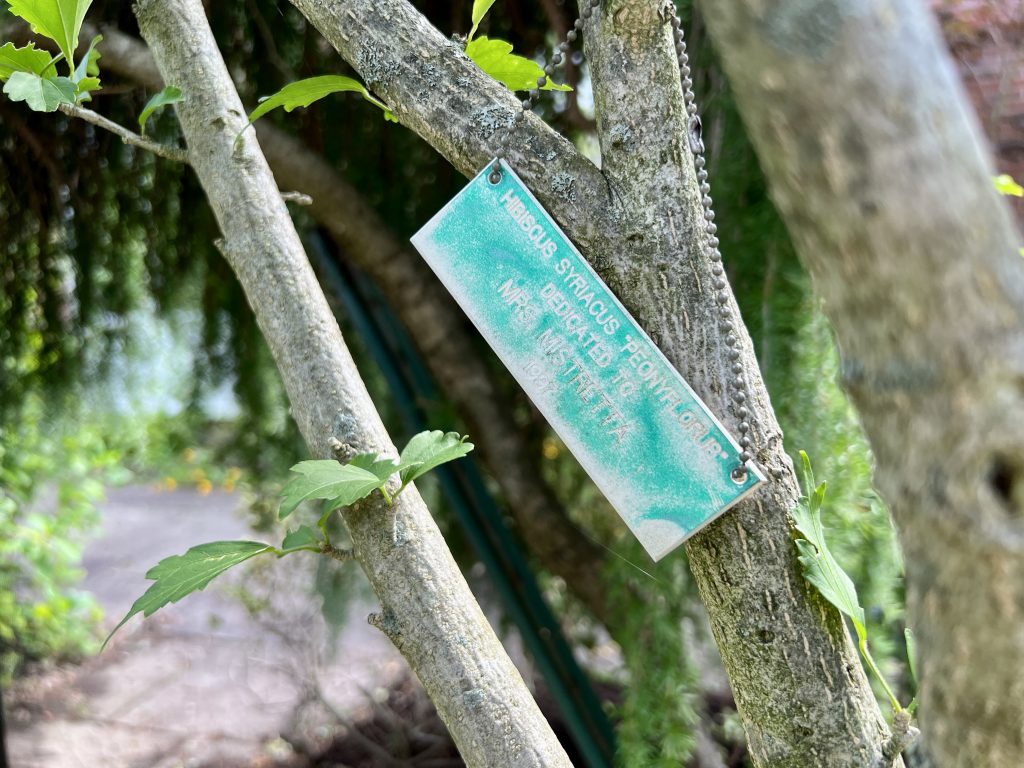 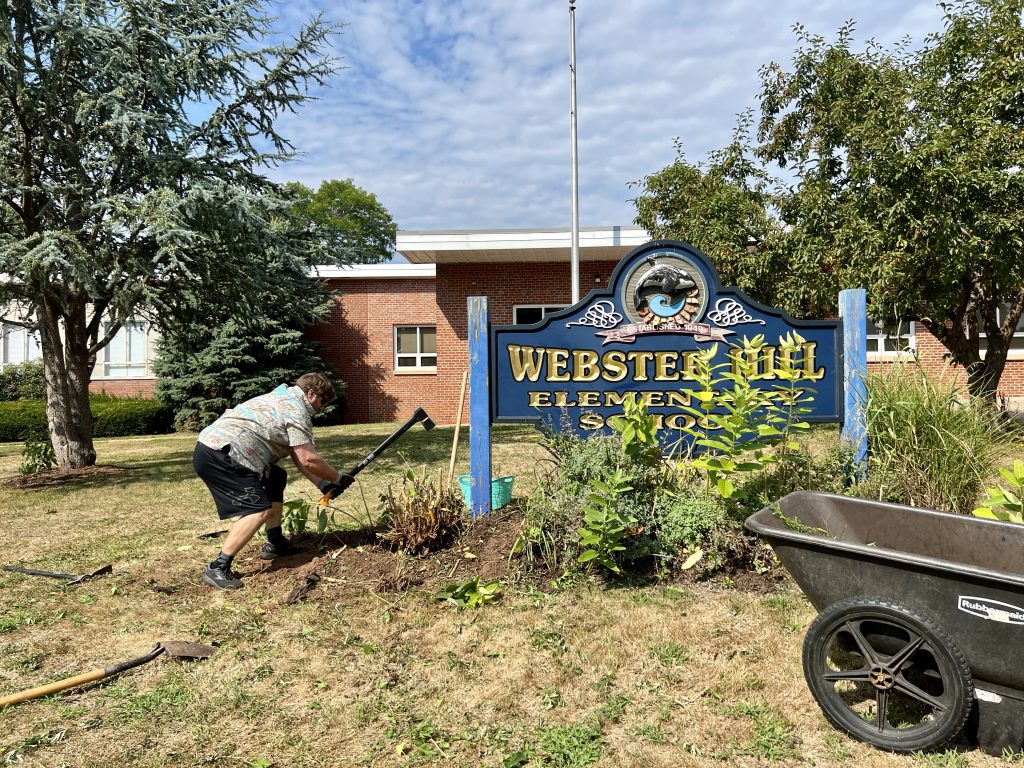 A volunteer attacks the stump of a bush that had been removed from the garden area next to the sign. Photo credit: Ronni Newton 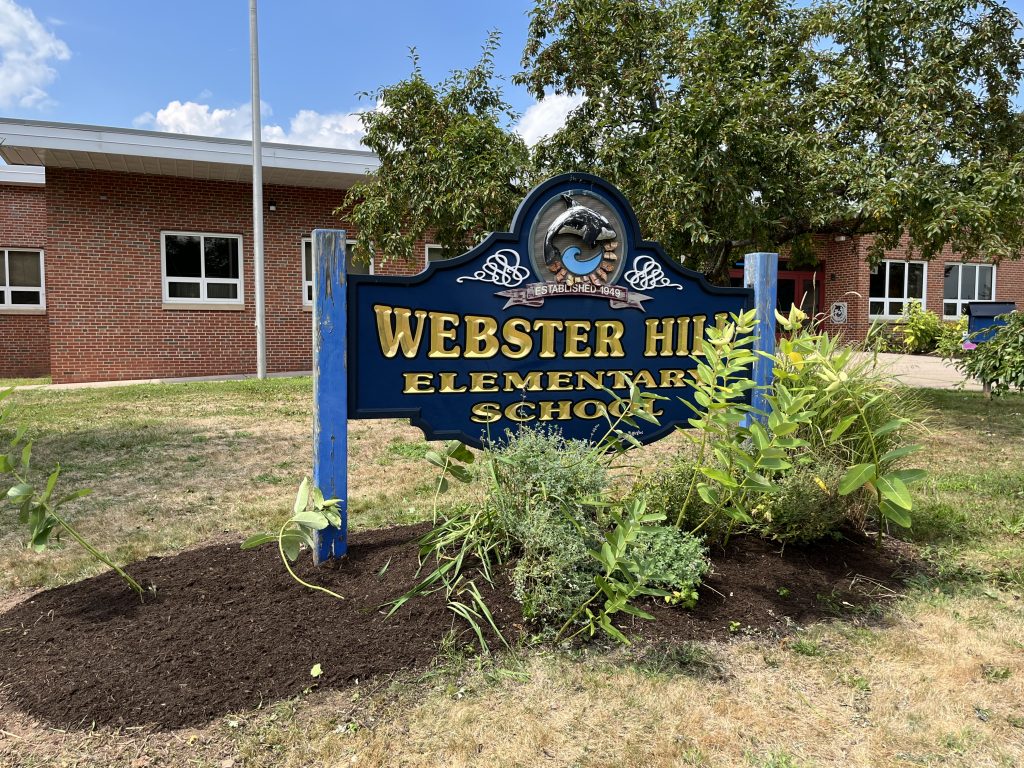 The area around the Webster Hill sign has been weeded and covered with milch. Courtesy of Randi Leopold 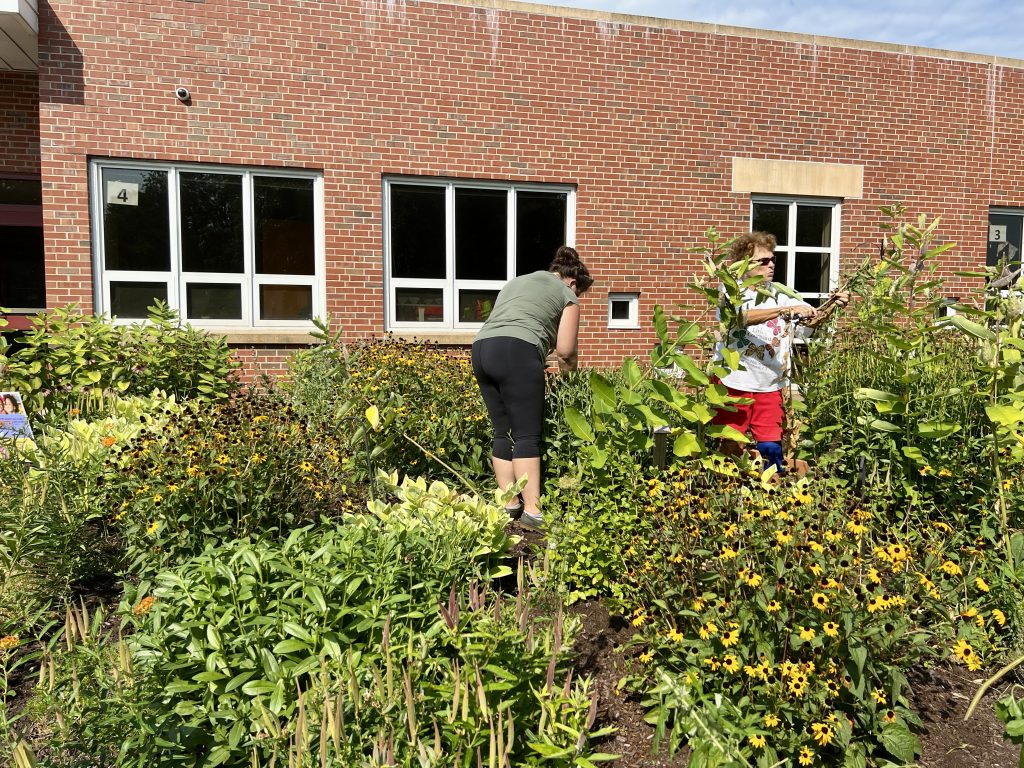 In addition to the courtyard, the front garden where milkweed and other pollinator-friendly plants grow was being renewed on Friday. Photo credit: Ronni Newton 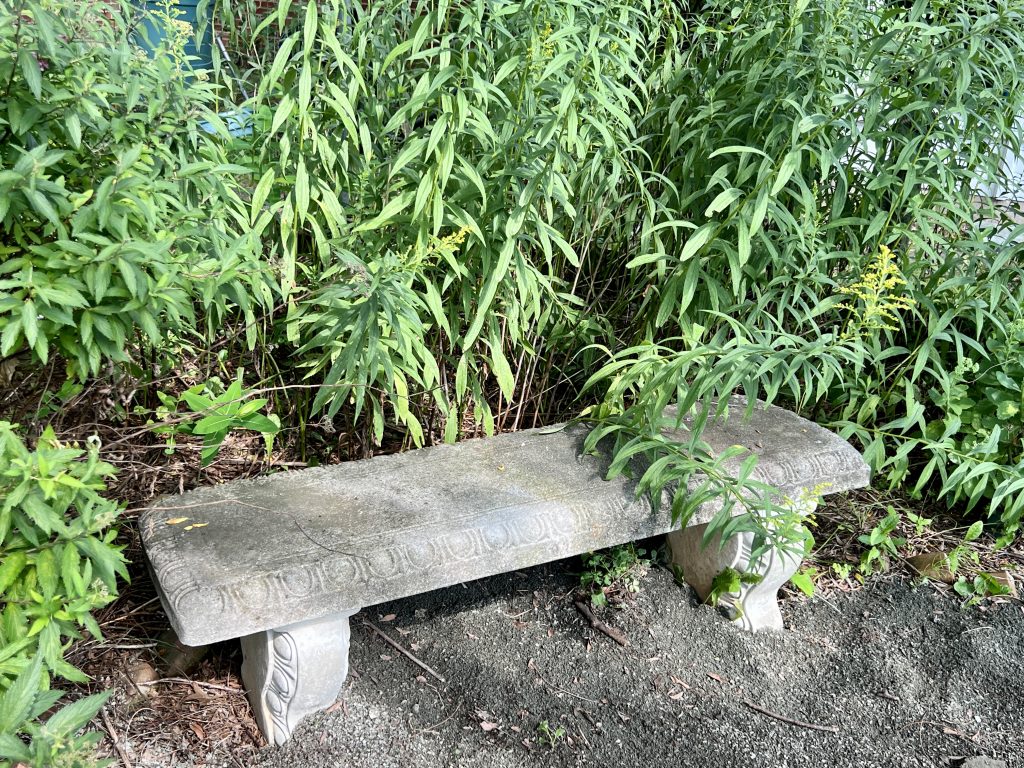 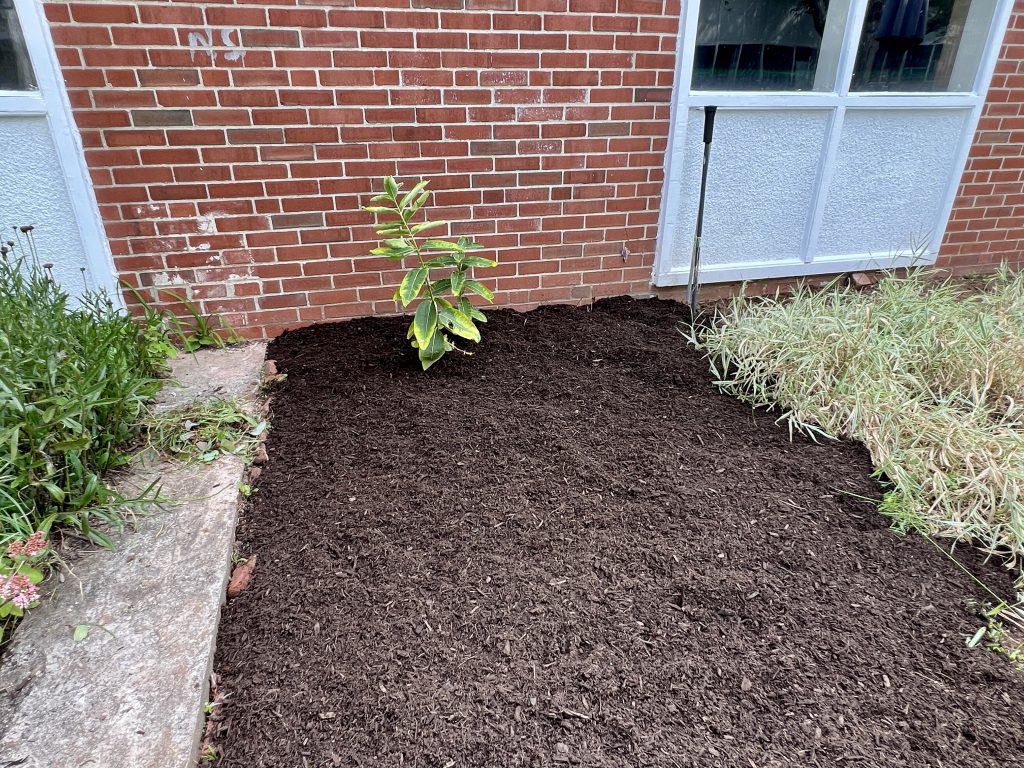 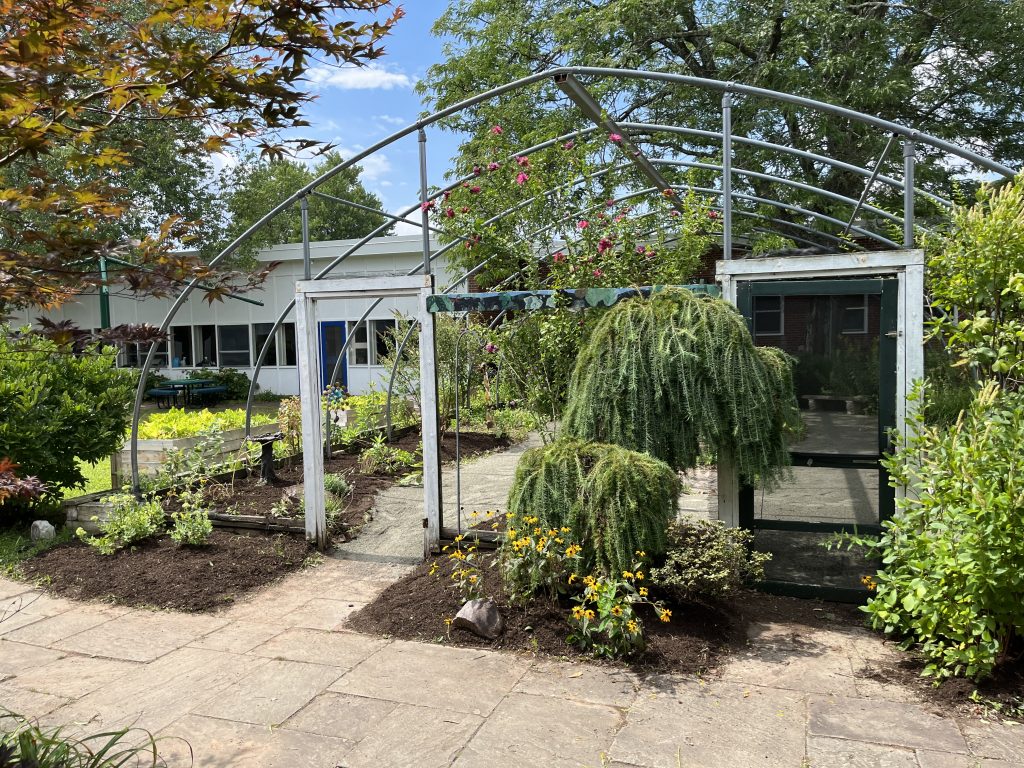 Weeds are gone and new mulch has been spread in the Webster Hill courtyard. Photo courtesy of Randi Leopold