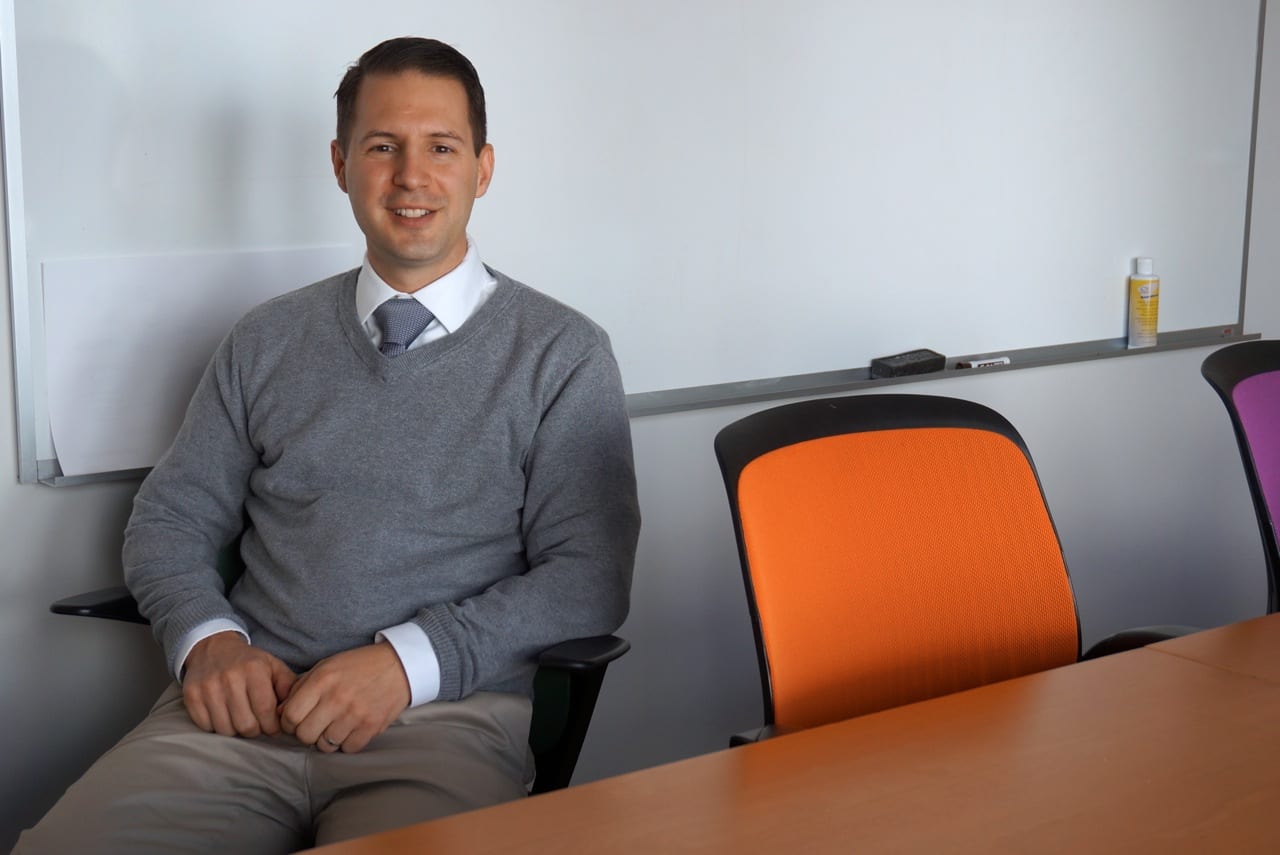 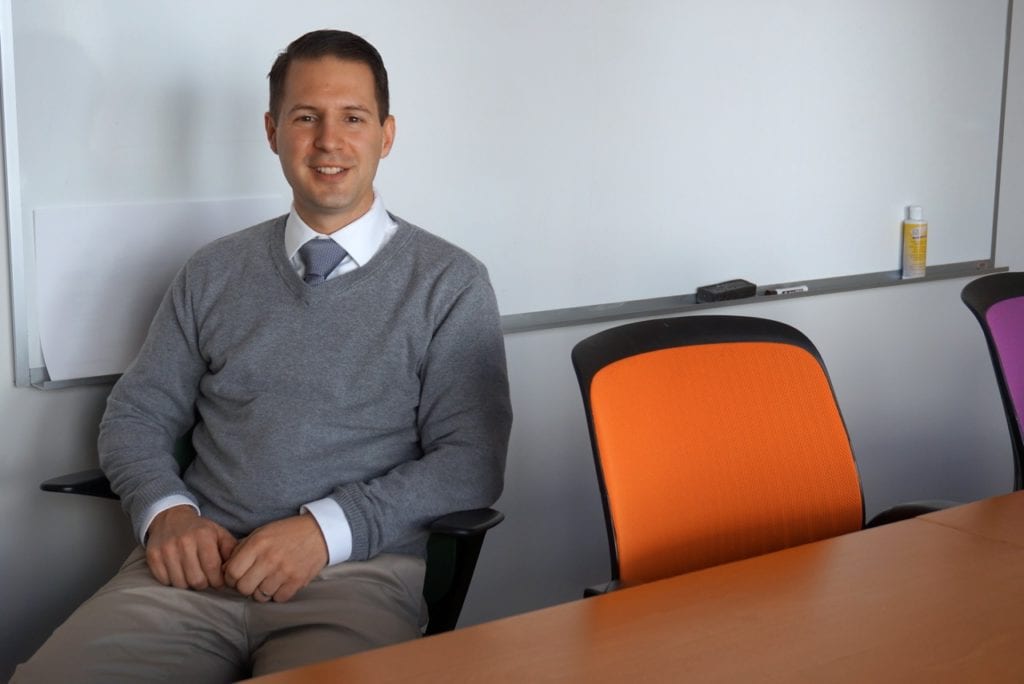 John Paul Vasellina can do his job virtually anywhere, but he doesn’t like the isolation of working at home.

Vasellina is a software project manager for a San Francisco-based company. He was raised in Connecticut but lived in California for many years, recently returning to the east coast to be closer to family. He and his wife, Erika, lived in Westport at first and Vasellina was working remotely but found office space a few train stops away because he was more energized going to an office.

Earlier this year he and his wife moved from Westport to West Hartford. His wife also works remotely as a contracts manager for a pharmaceutical company, and they have a new baby. Vasellina said his wife is more introverted and happy to work at home, but he felt the need to meet people and become part of the business community.

Vasellina solved his own dilemma, and that of nearly a dozen others, by opening West Hartford’s first co-working community, WeHa Works. 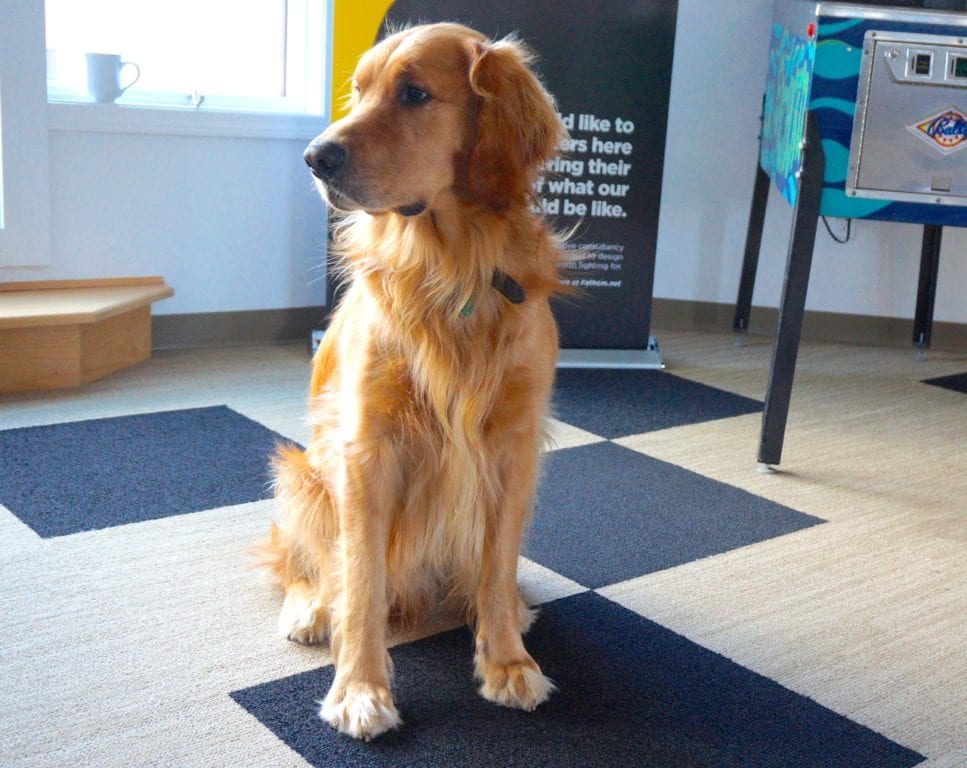 Gus, a Golden Retriever who belongs to one of the owners of Fathom, can often be found in the 967 Farmington Ave. space. Photo credit: Ronni Newton

Enter the doorway to WeHa Works at 967 Farmington Ave. and you may be greeted by at least one pair of fur-fringed eyes staring down from the top of the stairs. After spending a few months searching all over West Hartford for an ideal space to open WeHa Works, Vasellina entered into an arrangement to lease space from Fathom, a marketing company where employees are allowed to bring their dogs to work. Gus, a Golden Retriever, as well as yorkies Pookie and Ari, are frequent visitors.

The office space is situated right in the middle of West Hartford Center, with a wall of windows overlooking Farmington Avenue. It’s vibrant and modern, close to many great restaurants and other activities, but also homey and welcoming.

Every member gets his/her own desk and chair, free high-speed internet access, use of a printer and copier, and four hours per month of conference room space.

There are other amenities as well: the dogs, a rooftop patio where the WiFi signal remains strong, a foosball table and pinball machine, and an unlimited supply of complimentary nitrogen-infused cold brew coffee.

And there are also the intangibles, which Vasellina personally finds very important – being part of a community of “nice, smart, and creative good people.”

WeHa Works officially opened its doors on Oct. 1 – just a week after Vasellina’s son, Paul Bennett, was born. “It was a lofty plan,” he said, but a few people had already signed on to use the co-working space and it needed to be ready.

By the end of the first month, Vasellina had seven members. He now has 10 – nearly full capacity in the 1,00o square feet he leases from Fathom.

The membership is a mix of men and women. Some have other full time jobs and use the space after hours to work on start-ups. Many work for out-of-state companies and like Vasellina are remote employees. One company, headquartered in Canada, is setting up a U.S. presence and three of its employees are using the WeHa Works space. 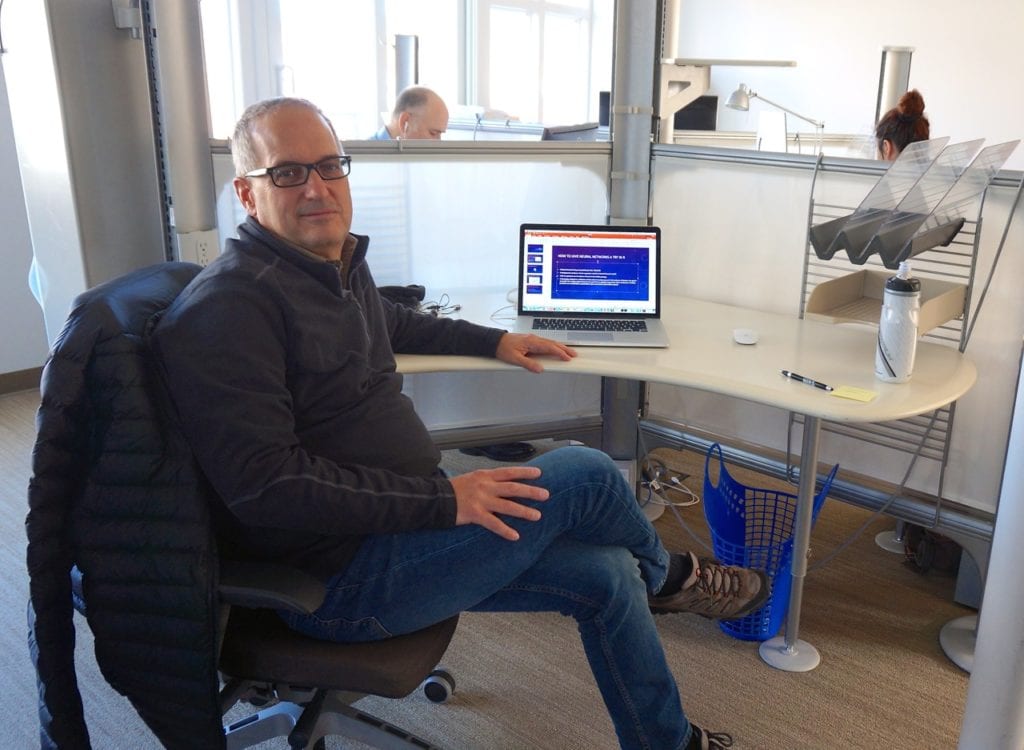 Buzz Aker works remotely for a Tampa-based software company and had been working out of his home. He also recruits and manages a group of interns, and was using the West Hartford Library as meeting space.

“I need to be around people or I go nuts,” Aker said, and was looking around for options when he found WeHa Works. He tested it out for a week and found he liked the environment, flexibility, and access to the conference room for meetings. Aker’s company agreed to reimburse him for the cost of membership and he signed on in October.

“I really found that letting potential  test it out for a week for free is a good way for people to make a decision,” Vasellina said.

There’s an eclectic playlist of music providing background noise. Vasellina said it’s often quiet, but there are plenty of times when people are collaborating and sharing ideas or just talking with each other.

A West Hartford woman who works as a career coach for a company based in New York said she was excited to get out of her dining room. She recently moved to West Hartford when her husband got a job with Travelers. “I’ve been waiting for this with bated breath,” she said.

The natural light and being in the Center where people are out and about were a bit draw, as was the chance to share ideas “that overlap but don’t compete” with other consultants.

“I felt isolated in suburbia. This is like being back in the city,” she said. “I also like the dog that greets me at the top of the stairs.”

Other new members are on the horizon as well. He’s courting a local law firm which may go virtual and said he’s been getting five or six inquiries a week and is already thinking about expansion possibilities.

Vasellina is very thankful to Fathom for working with him to make the space available. “Their generous spirit and entrepreneurship is tremendous. They have been so flexible and accommodating,” he said. He’s also grateful to all of the members for joining.

Vasellina doesn’t plan to leave his full time position, and started WeHa Works just to create a community. “I want to make a modest profit, but quite frankly what I really don’t want is to lose money,” he said.

“This is the most fulfilling thing I’ve done in my career. I get to show up and make sure people enjoy their day,” said Vasellina. “I’m really happy, and lucky.”

Membership costs between $299-$325 for a 30-day period. “Really if you buy cold brew every day you would almost break even,” he said.

Parking is not included, although Vasellina said he is looking at bundling membership with a parking pass for the Town Center garage. He is also considering day passes or an option for a certain number of days per month. Reciprocal agreements with other co-working spaces are also under consideration.

For inquiries about membership or more information about WeHa Works visit their website, contact Vaselina at 860-800-9342 or email him at [email protected]. 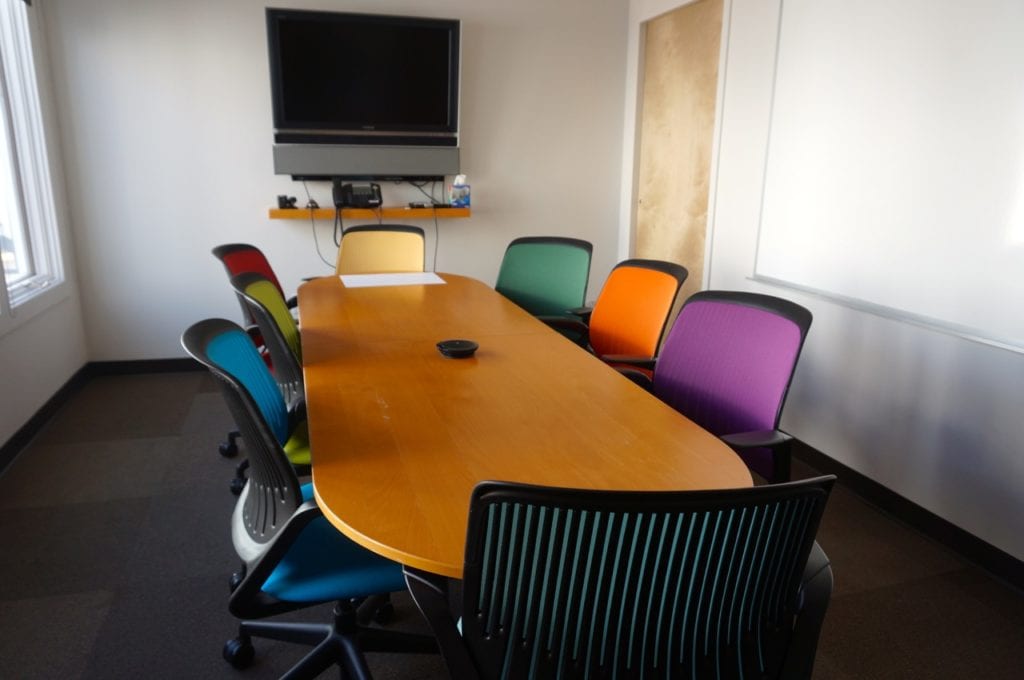 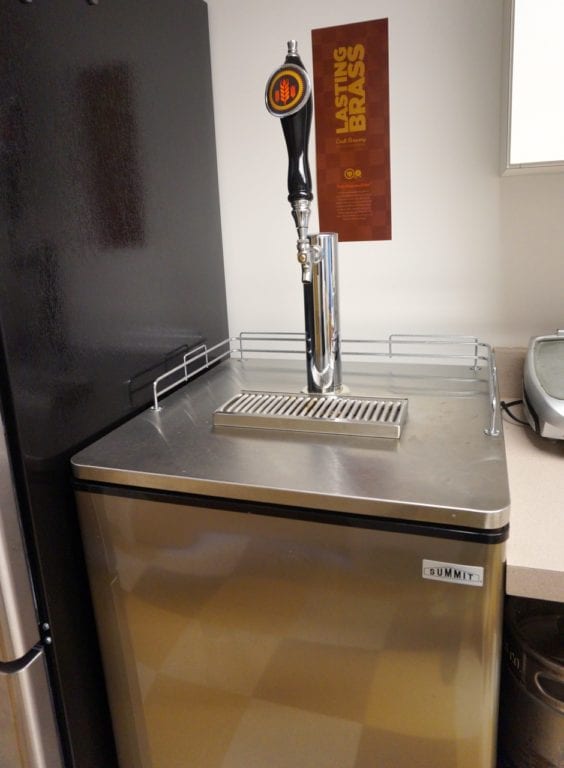 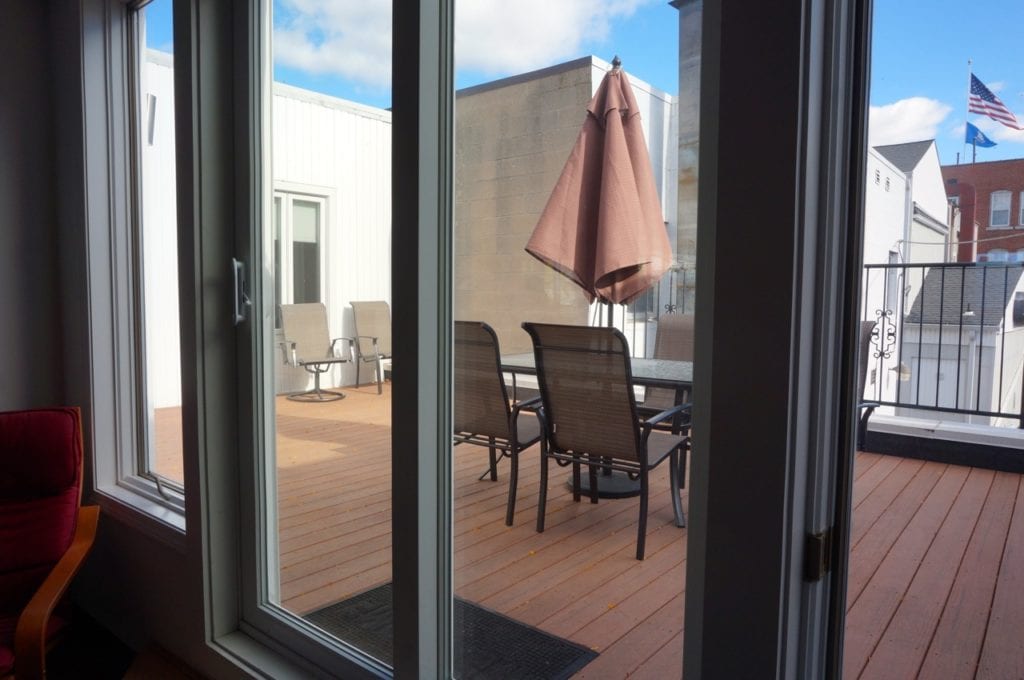 WiFi works on the deck, too. Photo credit: Ronni Newton 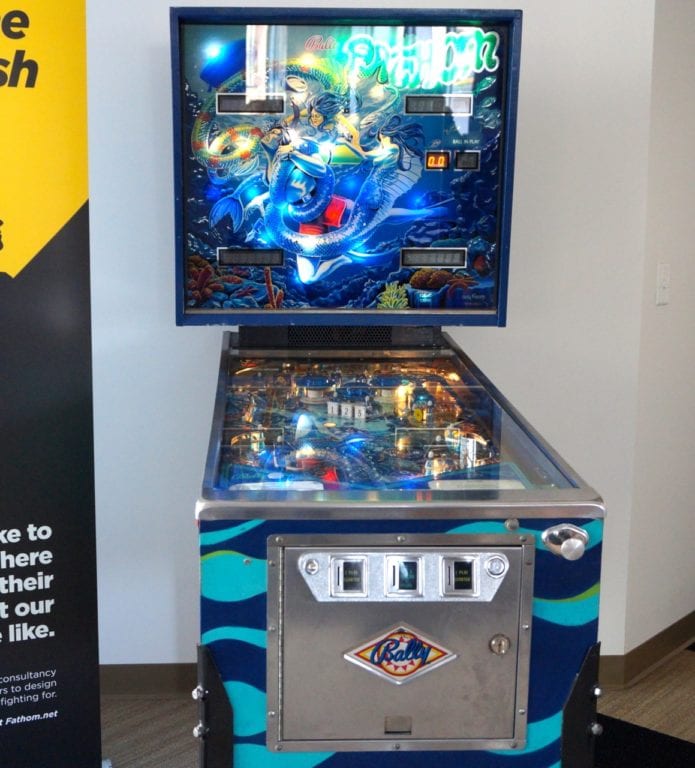 A pinball machine is available as a diversion to WeHa Works members. Photo credit: Ronni Newton 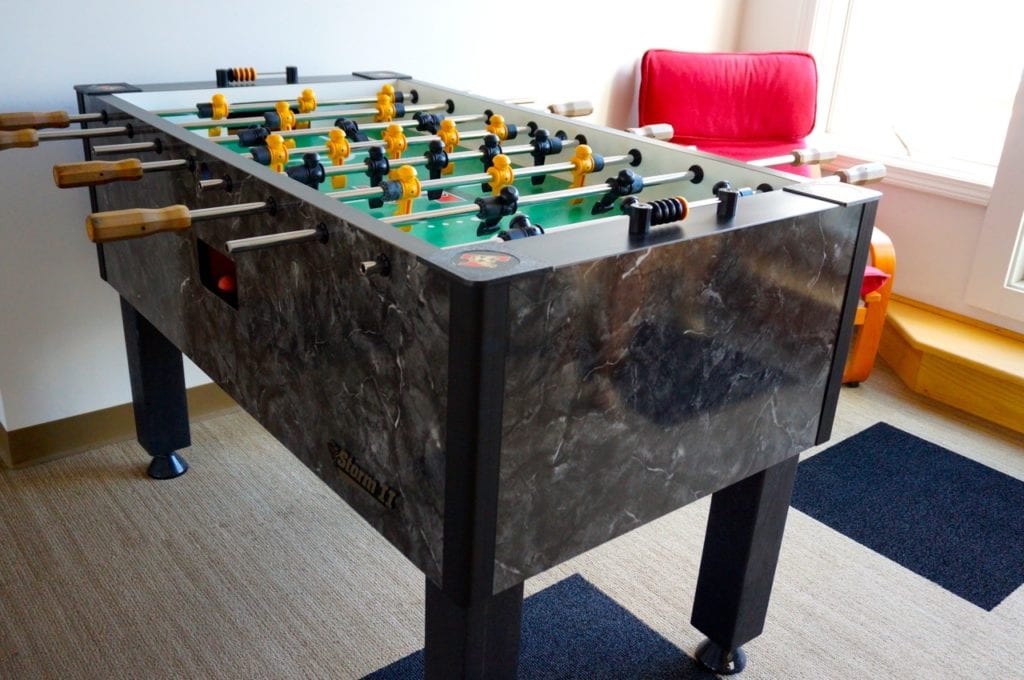 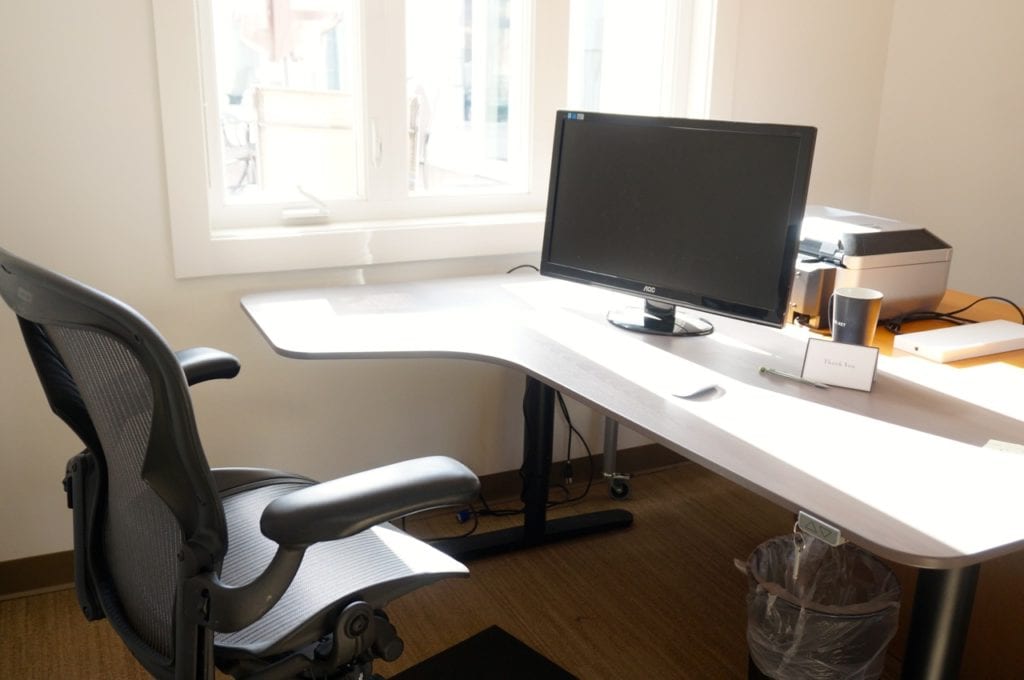 Every member gets a desk and chair, as well as use of the printer and copier and four hours per month of conference room time. Photo credit: Ronni Newton 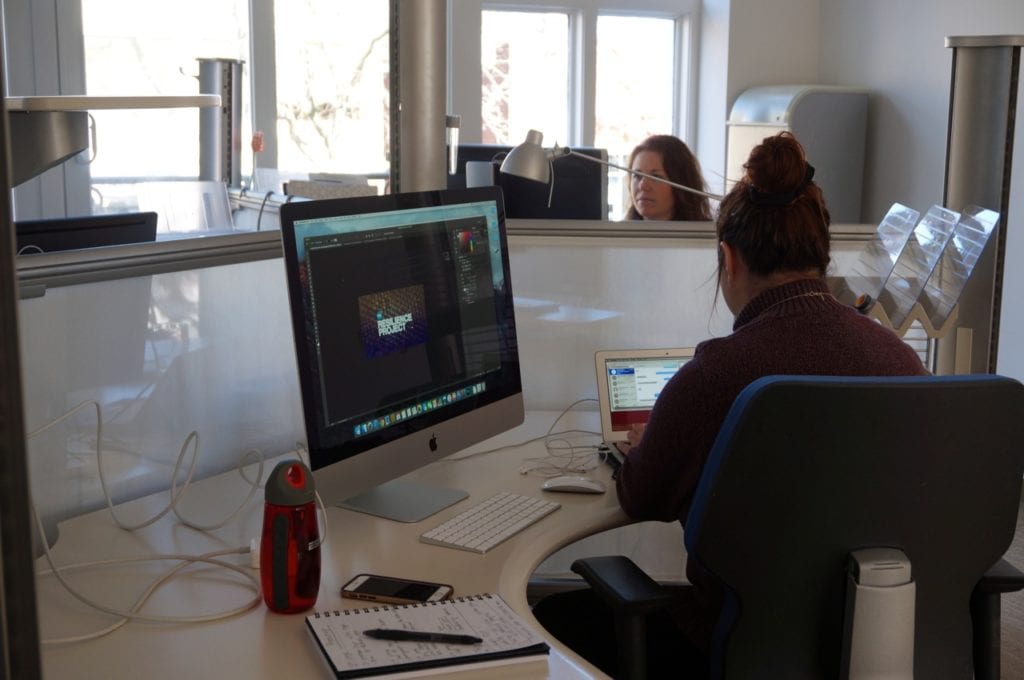