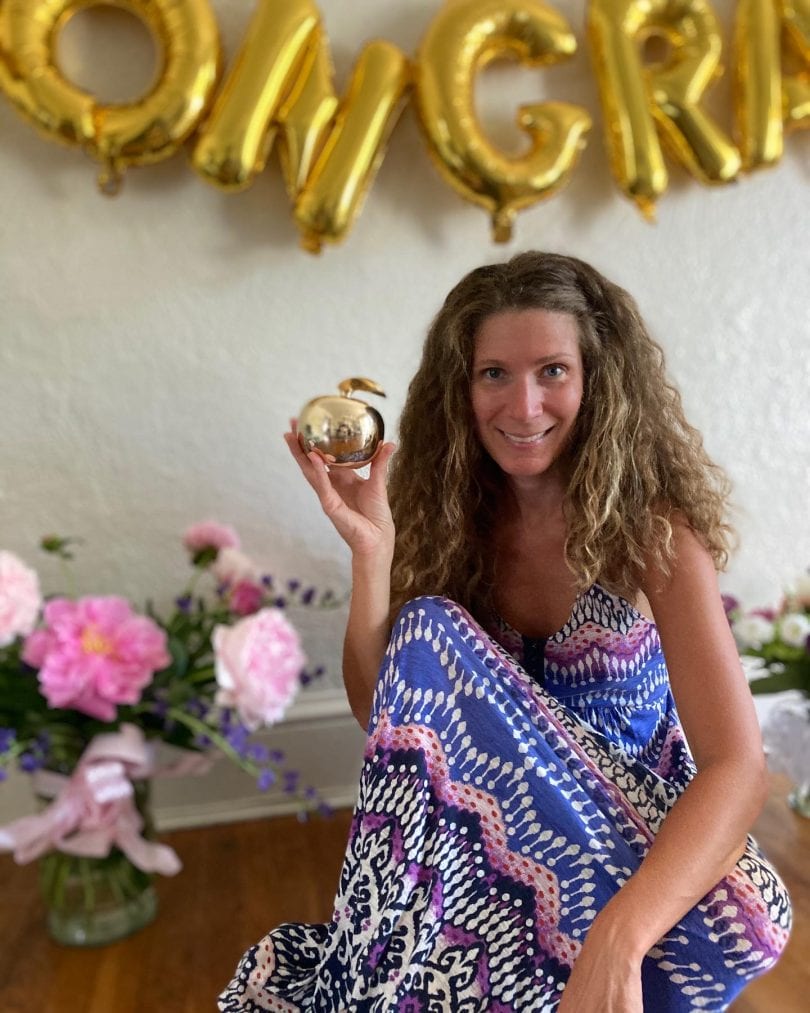 Smith ESOL teacher Ann Graboski, pictured holding the golden apple she was presented with by the committee, has been named the West Hartford 2020 Teacher of the Year. Courtesy photo

The process had to be somewhat modified this year due to a prohibition on in-person gathering and distance learning replacing in-classroom learning beginning in mid-March, but that did not prevent West Hartford Public Schools from selecting its 2020 Teacher of the Year.

On a Zoom call Thursday night, June 4, the Teacher of the Year committee, chaired by Michele Cashman and Tom Ledvoroski, announced that Ann Graboski, an ESOL teacher at Smith STEM School, is the 2020 West Hartford Teacher of the Year.

Prior to obtaining a second masters degree and transitioning to teach English for Speakers of Other Languages (ESOL) three years ago, Graboski taught Kindergarten for 12 years at Smith STEM School.

She has twice been selected as a speaker for the Building Learning Communities Conference, been a speaker for the New England Pre-K-3 Conference, is a mentor teacher at University of Saint Joseph (where she obtained a Master of Arts in reading and language specialization and a Master of Arts in TESOL). She has been a recipient of a Foundation for West Hartford Public Schools grant and is a former member of the Council for Equity and Diversity.

“After over a decade of experience as a Kindergarten teacher, Ann’s passion for language and cultures, tied with her respect for individuals’ unique backgrounds and her innate adventurous spirit propelled her career down a new path,” Ledvoroski said during Thursday’s Zoom call.

He said that her students “enjoy her creative use of technology and thoughtful, individualized planning,” and noted that her ESOL assembly presentations, which highlight a new language each month and celebrate students and their families, are a school favorite.

Smith Principal Teresa Giolito noted Graboski’s many contributions to the school, her work with other teachers “in building their capacity and understanding of instructional practices that support English language learners,” and her encouragement of family connections.

The names of all three Teacher of the Year finalists were announced Tuesday night at the Board of Education meeting.

The other two finalists were Lori Durocher and Marnie Paulus.

Durocher, who was also a finalist for Teacher of the Year in 2003-2004, has taught for 30 years, the past 24 years as a Kindergarten teacher at Norfeldt Elementary School.

She has a BS in education and a master’s from Southern Connecticut Statue University, and has been a Sate of Connecticut BEST Program mentor.

Paulus is a grade 6 science teacher and team leader at King Philip Middle School. She returned to King Philip in 2012 after having first taught there in the 1990s, and during the interim was a tutor. She previously received King Philip’s Teacher of the Year award.

Committee members noted Paulus’ involvement as a member of the CHEER, Social, and Teacher of the Year committees. She is a WEB coordinator, a member of the town-wide vertical science team, and has presented to the district’s science department, in multiple building CSIs, and presented “How to Succeed in Middle School” to parents of incoming students.

Paulus has a BA in psychology from St. Anselm College and a master’s in education from the University of Saint Joseph.

The Teacher of the Year committee includes 21 educators from across the district, who this year participated in five hours of online participation for the selection process. Nominations were made by other teachers, and nominees were required to submit a resume, essay, and recommendations. They also had lessons videotaped before the formal interview process.