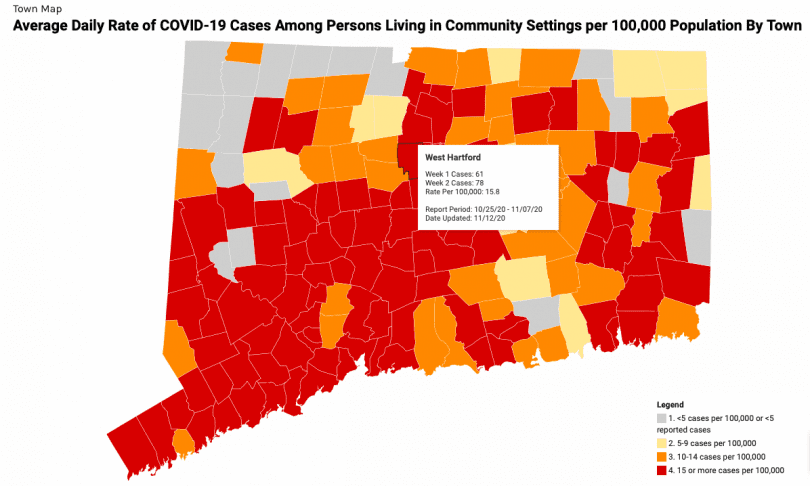 Average Daily Rate of COVID-19 Cases Among Persons Living in Community Settings per 100,000 Population By Town

West Hartford now has a case rate per 100,000 of 15.8 according to data reported Thursday. 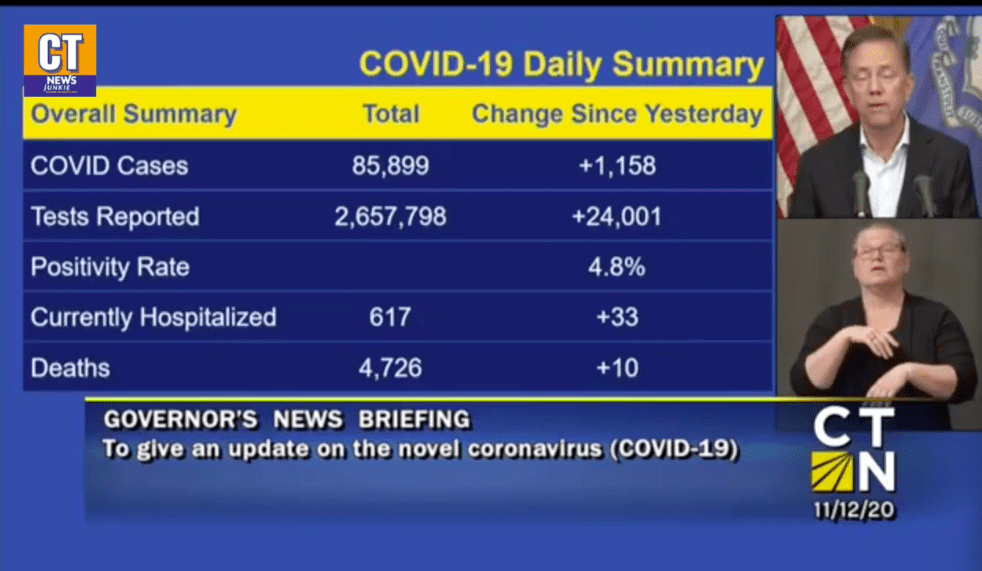 Coronavirus infection rates have reached “red alert” levels in 100 of 169 Connecticut towns as the state continues to weather what a former Food and Drug Administration head described Thursday as a difficult “eighth inning” of the pandemic.

Gov. Ned Lamont announced updated COVID-19 numbers during a televised briefing from the state Capitol. In the past 24 hours, Connecticut has seen an additional 1,158 cases with a positivity rate of 4.8%. The seven-day average is 4.4%.

Hospitalizations rose by 33, bringing the statewide total 617. Another 10 residents died of the virus, he said.

The governor also provided a weekly map of the state, which identifies towns that have infection rates higher than 15 positive cases per 100,000 residents. The number of “red alert” towns jumped from 68 last week to 100. More than 80% of Connecticut residents live in those municipalities, the governor said.

Lamont, who usually tries to highlight a silver lining when delivering bad news, seemed momentarily at a loss to characterize the statistic.

“What’s the good news there?” he said and paused. “Eastern Connecticut’s doing a little bit better. New London and Groton, bringing in the reinforcements. They brought down the positivity rate there a little bit. I guess that’s a positive.”

Later on in the briefing, Dr. Scott Gottlieb, a senior fellow at the American Enterprise Institute, a Connecticut resident, and former head of the Food and Drug Administration, supplied an upside by describing what the end of the pandemic may look like.

“This is really the sort of eighth inning, if you will. I think this is the final stage of the acute phase of this pandemic that we really need to get through,” he said.

Gottlieb said the next two or three months would be difficult. COVID-19 cases are expected to keep rising before eventually peaking in mid- to late January, he said. Hospitalizations and fatalities are expected to continue to rise as well.

But on the other side of that peak, things are poised to get better, he said. Warmer weather will be moving in, slowing circulation of the virus as more people shift activities outdoors. Meanwhile, an estimated 30-40% of the population will have already been exposed to the virus, which slows transmission, he said.

Gottlieb, who is on the board of directors at Pfizer, pointed to the successful vaccine trials by the drugmaker on a vaccine believed to be 90% effective. Other emerging treatments like vaccine development at Moderna and an antibody treatment being developed by Lilly will see the healthcare industry in a stronger position to combat the virus next year, he said.

“So we’re going to have a combination of a population that’s been heavily exposed to this, so the rate of transfer will come down, you’ll have the benefit of going into a season when it’s less likely to spread and you’ll have a backdrop of more therapeutics,” he said.

“As we get into the fall and the coronavirus wants to start circulating again because it’s a respiratory pathogen that likes to circulate in the fall and winter, at that point we’ll be ready to roll out a vaccine to mass-inoculate the population,” he said.

As school districts continue to struggle with staffing shortages and infections in some areas, the governor urged towns to keep conducting in-person learning to the extent that they could. He said districts have done a good job managing the problem.

The state anticipates that universities will not reopen for in-person learning after the Thanksgiving break and high schools already are conducting largely hybrid learning programs, he said. Meanwhile, a majority of pre-kindergarten through fifth grade students are still learning in person, Lamont said.

“That’s an appropriate mix as you see going forward with infection rates changing, doing everything we can to keep the youngest kids in the school,” he said. They are “least likely to shed the virus, least likely to have complications and we’re working hard maybe to get some younger teachers out of the teacher colleges to help in the classroom to get us through this calendar year.”

Gottlieb agreed the state should do whatever possible to preserve in-classroom instruction for younger students. Those students are less likely to spread or have bad outcomes from the virus, he said.

“At some point we may have to go to a distance model,” he said. “I think the more we can keep kids in the classroom the better.” 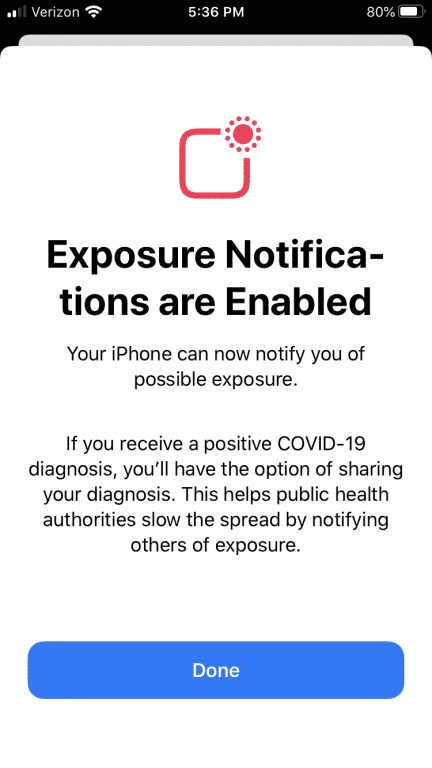 The governor also announced Thursday that the COVID Alert CT app for smartphones has now been activated, and will alert you if you have been exposed to someone who is positive if that individual also has the application notifications enabled.

Those with Apple devices can find the application under “Exposure Notifications” in their settings menu, those with Androids can find it through Google Play.

Setting up the notifications is easy, Lamont said. “Even I could do it.”

The governor said Connecticut is the first New England state to fully activate the alert system, but it has successfully been used elsewhere in the country and at several of Connecticut’s colleges.

The alert system is totally anonymous, Lamont said. If you are alerted you will not be told where the exposure came from, but will get instructions on regarding quarantine and testing.

Chief Operating Officer Josh Geballe said that anyone who tests positive will get a call from a contact tracer. If they have the app, the contact tracer will provide a code to enter into your phone and then those who have been in close contact with the person who is positive, over last 14 days, get notified if they also have the app.

“This does not replace traditional contact tracing,” he said. “It’s another tool,” and even notifying just a few people that they have been exposed can break chain of transmission.