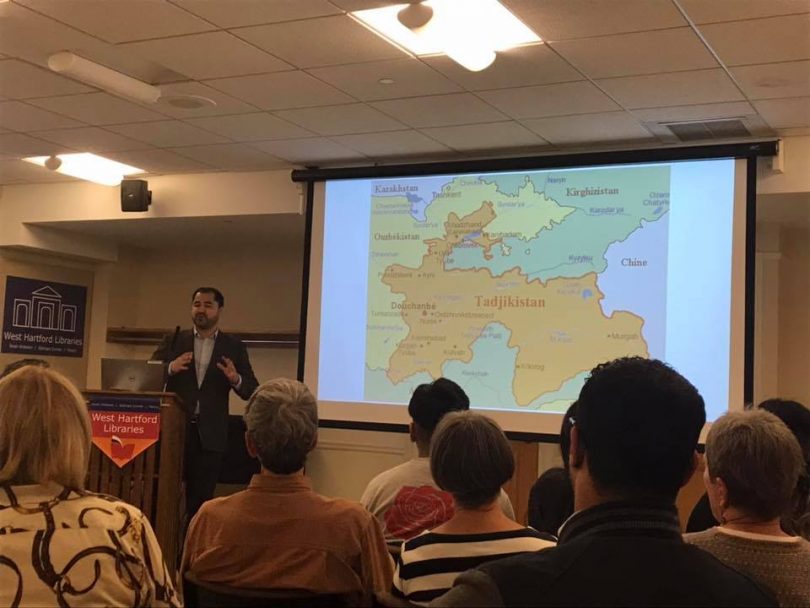 The West Hartford Public Library hosted four West Hartford area immigrants, each of whom shared their experiences with the immigration process and their expectations for their future in the United States. 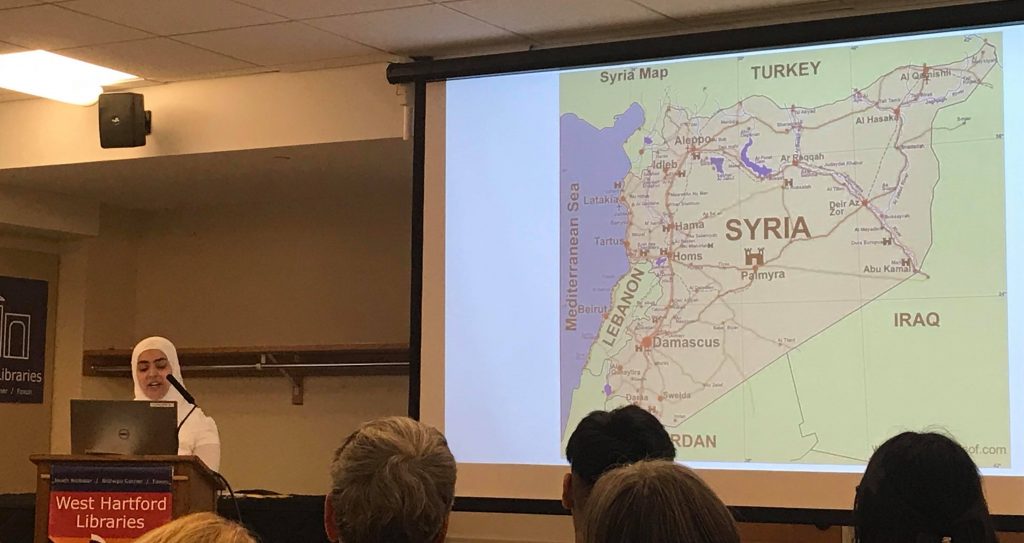 In introducing the four speakers in the “Neighbors From Around the World: Speakers Forum,” moderator Ellen Salzman-Fiske noted that every immigrant’s story is both traumatic and inspiring. And, despite being from four different corners of the globe, each of the four immigrants who participated in the speakers forum shared stories rife with pain and frustration but also optimism and success. 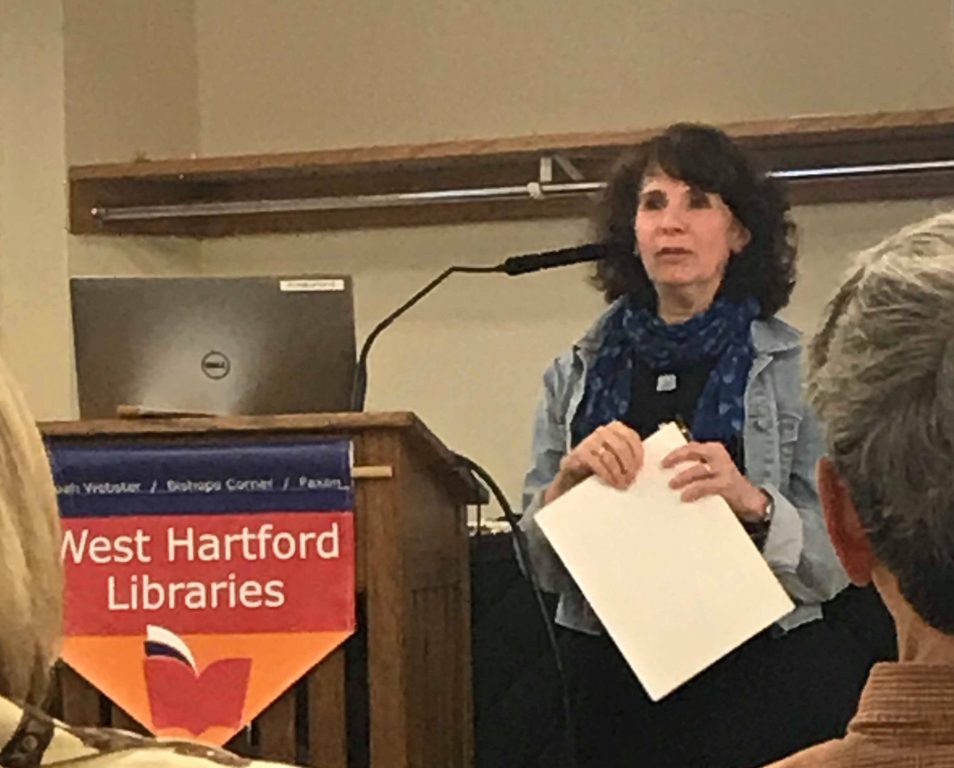 Salzman-Fiske, in addition to being the moderator of the event, is President of Golden Door, a center for immigrants and the nonprofit that organized the forum in conjunction with the West Hartford Public Library. Her introductory speech preached the importance of immigrants in the United States and in West Hartford specifically, and noted that more than 80 languages are spoken throughout the West Hartford Public Schools system. Hearing the stories of these immigrants, Salzman-Fiske added, “bonds us” and is “important in bringing our community together.”

The first speaker on the night was Rauf Majidan, an immigrant from Tadjikistan who now resides in West Hartford. Majidan grew up amidst the fall of the Soviet Union in Tadjikistan, where the threat of violence was always right around the corner.

Majidan was able to obtain a visa in 2009, and soon thereafter moved to New York, where he pursued an international business degree at Brooklyn College. After earning his bachelor’s degree, Majidan met his wife in 2012 and moved to West Hartford. He integrated into the community immediately, and is now a member of the West Hartford Chamber of Commerce as well as the Avon-Canton Rotary Club of Connecticut.

It was not all smooth sailing for Majidan, however. With his daughter in attendance, Majidan grew emotional, recalling his own childhood. “While she plays with toys, I played with bullets,” Majidan noted solemnly.

Majidan also spoke on the current political climate, telling audience members that “to see the rising tensions against immigrants, it is very hard to look at it and stay quiet.” Majidan drew parallels between America’s current political atmosphere and the nationalism he experienced growing up in the aftermath of the collapse of the Soviet Union.  Ultimately, however, Majidan was unwavering in his optimism, concluding by saying “I am really happy to be part of the West Hartford family,” and noting that he wants to continue being involved in the local community.

Following Majidan was Marc-Yves Regis, a freelance photojournalist and author of five books. Regis, fleeing from political turmoil, emigrated from Haiti in the early 80s to join his brother and aunt in Miami. Life in Miami was different for Regis – in Haiti he slept with seven other family members in one room.

Immigration was tough on Regis, who said his “life in Miami was terrible” and he often felt powerless, given his lack of rights and inability to vote. Despite these obstacles, Regis was able to graduate with an associate’s degree from the Art Institute of Fort Lauderdale, and in 1991 left for a full time photojournalism position at the Hartford Courant.

Like Majistan before him, Regis was honest about the many challenges he and other immigrants faced upon arrival in the United States. Immigrants from Haiti, Regis said, were “refugees standing at the golden door of Mrs. Liberty” but “without papers, without a name, and without power.” However, Regis concluded on an optimistic note, telling the audience that despite the hardships he endured, “the United States was the best thing to happen to my life” and that he is “blessed to be here.”

Regis is now a U.S. citizen, and conducts an annual summer camp entitled Camp Hispaniola for hundreds of underprivileged children in Haiti and the Dominican Republic.

The penultimate speaker was Sondos Mansour, who emigrated from Syria in 2014 in wake of the civil war taking place at the time. Mansour, growing emotional, recalled her father yell “chemical attack, chemical attack” in the heat of the war, prompting her to feel as if she was going to die.

Thankfully, Mansour and her family were physically unaffected, and Mansour came with her parents to Connecticut soon after. Initially, she could not even buy a cup of coffee with her limited English skills, and cried every night as she struggled with her new surroundings.

However, Mansour was able to push past those initial struggles, finding solace in the classroom. She graduated from Manchester Community College with an associate’s degree, and is now studying psychology at Trinity College in Hartford. In addition, Sondos has memorized the Quran, and teaches its contents as well as the Arabic language in conjunction with the Islamic Association of Central Connecticut.

Mansour’s situation is still precarious, however. Speaking on Executive Order 13769, known as the travel ban, Mansour said “the real threat now is the issue of being an unwelcome resident,” and it’s tough to “imagine the country I put all my hope in putting the pressure to deport me at any time.” 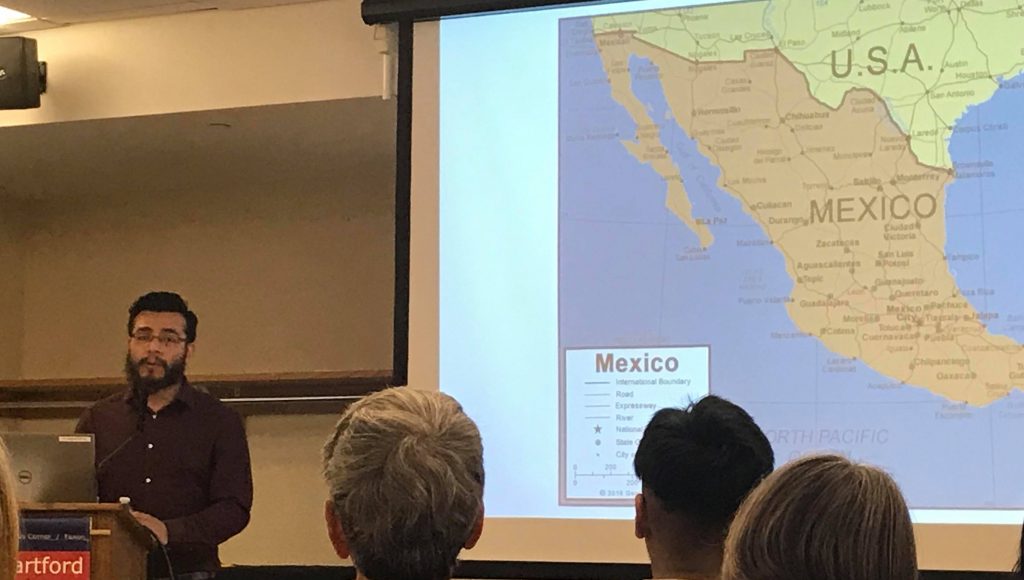 Jose Diaz was 10 when he crossed the border from Mexico to the United States. Photo credit: Bepsie Perry

The event’s final speaker was Jose Diaz, who emigrated from Mexico in the early 2000s at the age of 10. Diaz physically crossed the U.S.-Mexican border, running out of food and water in the process. “I still can’t believe I’m in front of all of you,” said Diaz.

After graduating high school, Diaz was told by his father that he had no choice but to return to Mexico if he was interested in continuing his education. He nearly did so, but instead received a work permit from DACA, enabling him to enroll at Central Connecticut State University, from which he graduated with a degree in business management.

Diaz hasn’t returned to Mexico since his immigration 16 years ago, and told the audience that it “might take two, four, six, 10 years before I can go back,” given the precarious climate surrounding immigration.

Diaz concluded with a call to action: “The reason I share my story today is not only so people realize how difficult this is but so that people understand they can do something about it.”

Outside of getting involved with an organization, Diaz said the most important way to make a difference is “continue to be open-minded,” and told the audience that “each individual here is going to have the opportunity to start this conversation.”

Salzman-Fiske and Golden Door hope to continue hosting Speakers forums in the future. The current plan is to make “Neighbors from Around the World” a biannual event, with the next forum tentatively planned for September.