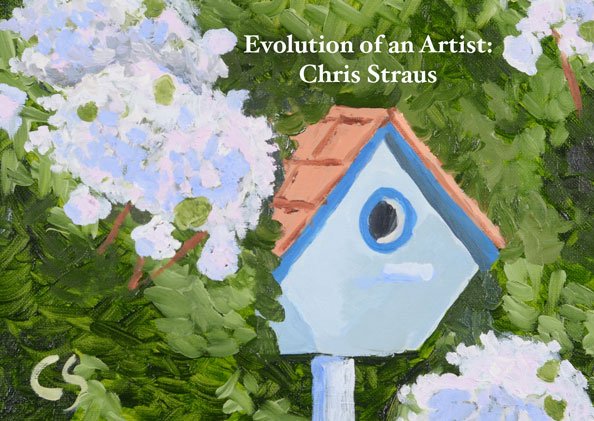 The Noah Webster House is hosting an exhibit of the works of West Hartford artist Chris Straus beginning May 11. Submitted photo

Straus graduated from Hall High School in 2007 and from the WAAVE program in 2010. Joy, concentration, and achievement describe Straus as he paints.

Straus is an individual with motoric and intellectual disabilities whose painting talent was discovered in High School art classes. Post-graduation, he enrolled in painting classes at the West Hartford Art League in 2010.

Straus paints only in art class with other artists and he works with his teacher, Brian Colbath, to try new strokes, techniques and to expand his repertoire. Producing a painting represents approximately 10 hours of work.

Straus delights in painting natural scenes he has visited with his family. Painting from photographs, he interprets what is in the photo, but his style is evolving to try different strokes and layers of paint to achieve texture and color shading.

Straus’ favorite style of painting is the Impressionists, and he chooses to paint in oils that are, as he says, forgiving of his mistakes.

His first professional show was in 2011 at the Midsummer Festival at the Florence Griswold Museum in Old Lyme, CT. He had another successful solo show at the Noah Webster House Museum in 2012, and has also contributed to shows at the Kerri Gallery in Willimantic, CT, the Marlborough Arts Center in Marlborough, CT, and at the West Hartford Art League. 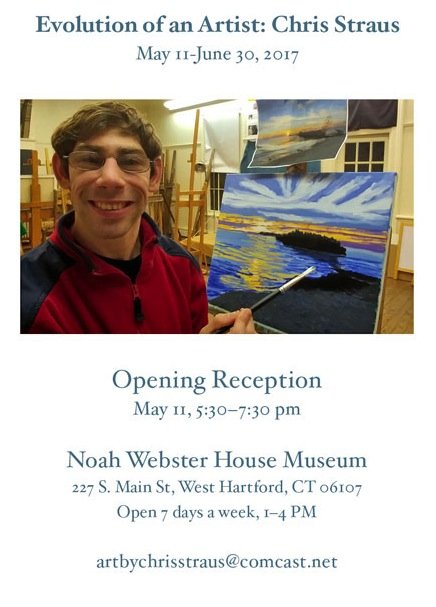 ‘Evolution of an Artist,’ showcasing the works of West Hartford artist Chris Straus, will remain on display through June 30, 2017. Submitted image

This show demonstrates Straus’ evolution as a painter. The subject matter he has represented includes flowers and birds, as well as landscapes and sunsets. His understanding of light and color and the reflection of light on water is developing and he is gaining strength as an artist. Challenging his teacher about light, color, and reflection, Straus is finding his own voice as an artist and learning to interpret rather than reproduce a scene.

He has sold many of his original works, and his card line that is carried in Connecticut by Whole Foods Market features reproductions of his work. He hopes his paintings bring joy and a smile to you, too.

The museum would like to thank the Greater Hartford Arts Council and the Hartford Foundation for Public Giving for their continued support.

The Noah Webster House & West Hartford Historical Society is a cultural destination where citizens can learn to understand and appreciate the past. The museum preserves the birthplace of Noah Webster, the founding father, educator, author, and lexicographer who taught generations of Americans what it means to be American. This National Historic Landmark is also a repository for the history of West Hartford, the community that molded Noah Webster’s future and is still thriving over 250 years later. The historic house and exhibit spaces are open daily 1 until 4 p.m. For information on the museum’s extensive school and public programs, please visit www.noahwebsterhouse.org or call (860) 521-5362.