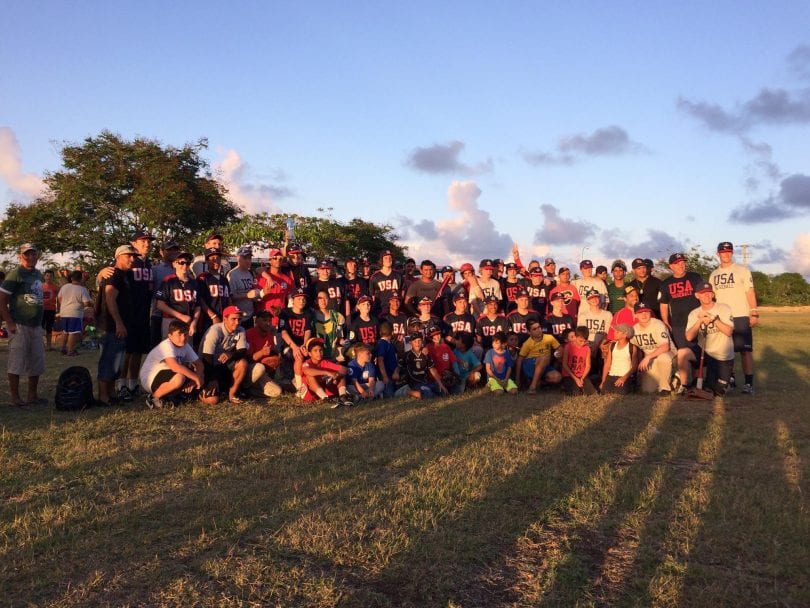 West Hartford teens, their families, and Cubans gather for a photo on a repurposed baseball field following a game. Courtesy photo

A contingent of West Hartford teens, their families, and their baseball coaches spent a week in Cuba’s Holguin Province, and although the experience did not turn out as planned, organizers believe the trip was a great success.

Twenty-four teen “baseball ambassadors” from West Hartford headed to Holguin Province, Cuba on April 8 – accompanied by their parents, other family members, their coaches, and a ton (literally) of school supplies and baseball equipment – for the second annual USA-Cuba Goodwill Baseball Tour, and although the tour did not go according to plans and was very different from last year’s trip, head coach and director of Teen Cultures Connect Tim Brennan said that in many ways the experience was even better.

“There was a miscommunication between the tour operator and local officials in Cuba,” Brennan said. That miscommunication resulted in the West Hartford team being locked out of organized competition with their Cuban counterparts or formal, ceremonial visits to deliver the 2,000 pounds of school supplies and baseball equipment that they had brought as a donation.

“The entire point of Teen Cultures Connect is, like its name, to have kids from our community connect and engage, to build relationships at a people-to-people level,” Brennan said. “We accomplished those goals in many ways.”

When the team was unable to play formal games, they forged their own paths. Friends who were made when a West Hartford group visited Holguin last spring, and when a team from Cuba visited West Hartford in July, together with coaches and parents, helped organize pick-up games.

“It was truly a ‘you build it and they will play’ experience,” Brennan said.

The West Hartford group identified several fields near their hotel – repurposed horse pastures, complete with manure – and turned them into baseball fields. Two had formerly been used for baseball, but the third was a soccer field. 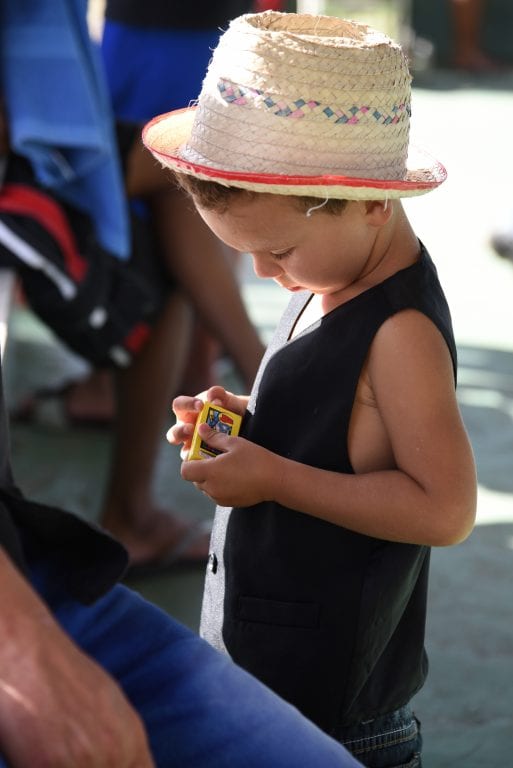 The Cuban children were really excited about the donated school supplies. Pictured is a Cuban boy with a new box of crayons. Courtesy photo

“The locals were thrilled. It was so open, they were so happy. We started games and people would come,” said Brennan. In many cases the West Hartford teens played against adults – Cubans with past baseball experience – and unlike last year they won several games.

The West Hartford contingent also started bringing the school supplies they had brought – 1,600 pounds shipped through the airline via Montreal and another 400 pounds packed in suitcases – and handing things out. “All of a sudden their were two guys who were local teachers and said they would help organize [the distribution],” said Brennan.

“It’s amazing to think about. The kids in the community were actually lining up for school supplies. They were so happy,” Brennan said.

They distributed the baseball equipment directly as well.

Something else magical happened, an organic outgrowth of the games with the teens and the adults. Brennan said that younger Cuban kids came to the field, and another game started up with kids ages 5 to 8 playing. Many of the West Hartford teens decided to play with and mentor the younger players.

Because of the informality, people had the opportunity to mill around and talk with each other. Brennan said that the Americans and Cubans mixed and communicated much more than they would have if they just played formal games, engaged in ceremony, and went their separate ways.

Less structure also allowed for unique one-on-one experiences and some West Hartford visitors were even invited to dinner at peoples’ homes. Brennan said he was invited to dinner at the home of Kareo Garcia, the head coach of the team that came to West Hartford last summer, and also visited the home of Reynaldo Cruz Diaz who traveled with the team last summer as a translator.

“We made lemonade, and that didn’t have to happen,” Brennan said. He said it was a credit to the people on the trip as well as the friends they had made in Cuba, and he is really proud of the people who went on the tour, how they dealt with perceived adversity, and what they accomplished. “We found a way, and it was wonderful.”

The Americans even had a lasting impact on the landscape, Brennan said, on the field that had not been used for much of anything in the past. “We started playing ball there, and that’s where everyone came. Truly we built it and they came, and now they said forever that field will be a baseball field,” said Brennan.

On the day the Americans were leaving, they saw a group playing baseball on their new field.

“We connected better, and with more people,” Brennan said. “I’m really humbled by the way the people on our tour stepped up to make that happen.”

There weren’t any plans for the Cubans to visit the U.S. this summer, but Brennan said another trip from West Hartford to Cuba will be planned for next spring.

“I was inspired by the way the group stepped up, and it strengthened [Teen Cultures Connect],” Brennan said. While the details are not yet in the works, he said the process of planning a return has already begun. 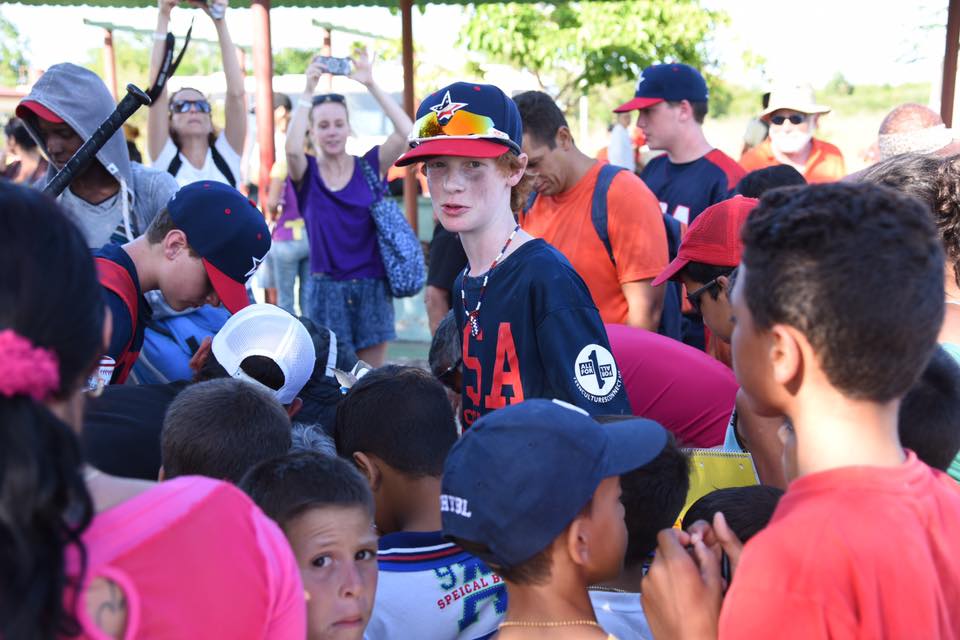 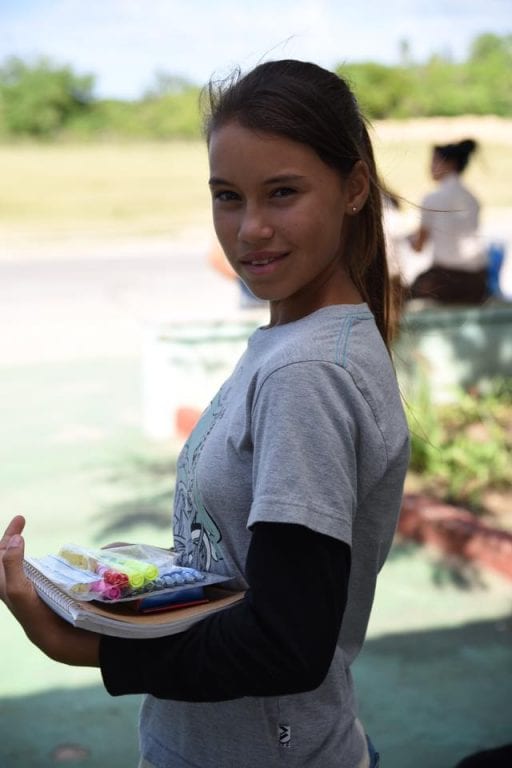 A Cuban girl receives donated school supplies brought as a thank you from the West Hartford group. Courtesy photo