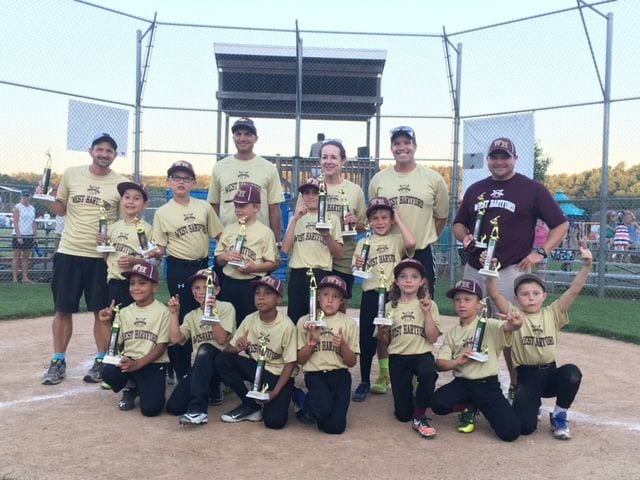 The WHYBL 8U Rattlesnakes finished the season 19-0, capped off with a victory in the Bethwood tournament. Submitted photo

The WHYBL 8U Travel Rattlesnakes were undefeated in their 2016 campaign.

The WHYBL 8U Rattlesnakes finished the season 19-0, capped off with a victory in the Beth-Wood Friendship tournament. Submitted photo

The 8U West Hartford Rattlesnakes capped a 19-0 season in dramatic fashion with three come-from-behind playoff victories to deliver the Beth-Wood Friendship Title to West Hartford for the first time on July 27. The Rattlesnakes also dominated the 2016 Mountain/River Tournament bringing the championship banner back to West Hartford against a talented field that included Avon, Berlin, Coventry, Farmington, Simsbury, and the West Hartford Thunder.

The Rattlesnakes finished Mountain/River Round Robin play 4-0 and then answered the bell each time in the playoff tournament beating Avon, 13-8 and Coventry, 7-2 to set up a final showdown with Farmington. Farmington defeated a gutsy WH Thunder squad 22-17 in the semi-finals and Coventry,14-7 in seven innings to earn their shot at the title.

Farmington was true to the test as they took leads of 2-0; 4-2; 7-4 and 8-7. However, the Rattlesnakes slithered back each time and finally a 5-spot put them up to stay 12-8. After a furious sixth inning rally, it was only fitting for team veterans Burke Reynolds and Maddy “Mad Dog” Peterson to combine for the final out of a hard fought 15-11 win in the clinching game on June 26.

The Rattlesnakes then finished a month long Bethwood-Friendship Tournament Round Robin 8-0 in the American League Division with victories over Berlin, Avon, South Meriden, Woodbury, Beth-Wood (2), Oxford and Hebron. The playoff road would prove to be a difficult one but the young Rattlesnakes were up for the challenge.

After a 15-0 quarterfinal victory over Oxford, familiar foe Avon would use their intimate knowledge of the Rattlesnakes to forge ahead in their AL semi-final match-up. Avon jumped out to leads of 4-0 and 6-3 before the resilient Rattlesnakes responded with a 6-run fifth inning to seemingly take control of the game, 10-6. Lennox Velez and Owen Hammond both delivered clutch 2-RBI hits as West Hartford staked a claim for a spot in the AL Championship Game. But Avon bounced off the mat and rallied for four runs in the top of the sixth inning to stun the number 1 seed. Only a clutch defensive play by Maddy “Mad Dog” Peterson prevented Avon from retaking the lead. The home team responded in the bottom of the sixth with three straight hits and Solly “Little Panda” Levy delivered the walk-off hit to score Yandel Rivera for an 11-10 victory.

This test seemed simple compared to the challenge put forth by Woodbury for the American League Title. Woodbury struck for two runs in the first inning and after the Rattlesnakes took the lead, the visitors seemed to have the game in hand as they rolled out to a 7-4 lead going to the bottom of the fifth. Once confident faces looked a tad glum with two outs and only a runner on first base, but Spencer Ferguson and Owen Hammond delivered with RBI hits to rally the team within a run going to the last inning.

Woodbury looked to increase their lead but staunch defensive plays by Yandel and Burke Reynolds kept Woodbury at bay. Still, parents and fans were at their wit’s end with only three outs in the way of the only blemish on a potentially perfect record. Fortunately, the kids were not nearly as nervous as their parents as Josh “Hitman” Gertner started a rally with a single and raced to third on a long double down the leftfield line by Benny “The Jet” Goldstein.

After an amazing Woodbury catch, Griff Keating calmly delivered the hit to score Josh and tie the game at 7-7. Charlie Rose followed with a hit of his own setting the stage for the Little Panda to knock in the game-winner for the second game in a row sending the crowd into a frenzy and the Rattlesnakes into the Championship Game.

National League Champion Monroe stood in the way of the Rattlesnakes perfect season. The Rattlesnakes found themselves in their third straight hole, 2-0 after the top of the first. The Rattlesnakes were familiar with this pattern and cut the lead to 2-1 on Spencer’s RBI single. After a four-run second inning, the Rattlesnakes would not be tested again. Griff continued his hot streak with a two-run hit and Charlie followed with his own run-scoring liner.

West Hartford added three runs in the third inning to increase the lead to 8-2 but Monroe’s powerful lineup was due up and two hits had their fearsome 3-4-5 hitters chomping at the bit to take their licks. The visiting team rose in anticipated delirium as their batter sent a rocket to left-center field only to have their hopes dashed by a calm and collected catch by Crash McHugh to end the inning. Crash upstaged himself the very next inning as he put on a Superman cape and dove to rob Monroe’s next hitter of extra bases. Burke made a nifty play on the run on the very next pitch and Lennox slid into first in the bottom of the frame to add another run. Yandel’s smooth glove got the first out in the sixth and after Spencer stepped on first base with the second out, the final out was recorded concluding the season with a 9-2 victory.