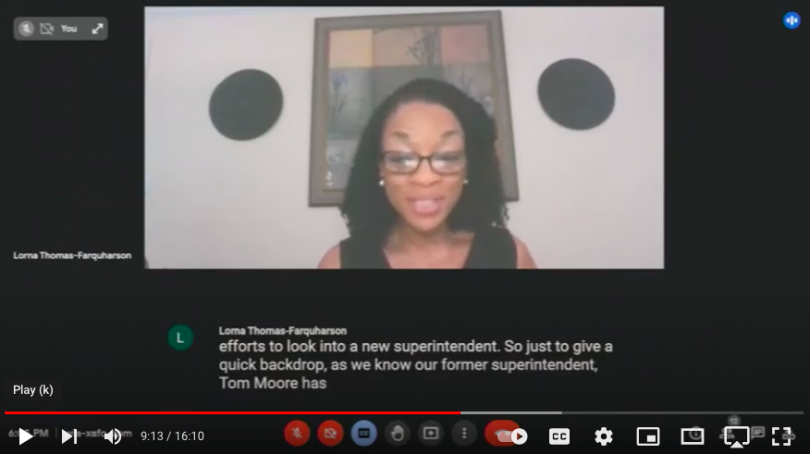 Board of Education Chair Lorna Thomas-Farquharson leads a virtual meeting July 21 where a search firm for a new superintendent was approved. Screenshot from WHCI

The West Hartford Board of Education met briefly Thursday night to vote on the choice of a firm to assist with the search for a new superintendent of schools.

All seven members of the West Hartford Board of Education attended a special virtual meeting Thursday night, and voted unanimously to appoint Cooperative Educational Services (CES) to assist in the search for a new superintendent of schools.

Tom Moore, who had served as West Hartford’s superintendent of schools for nearly eight years, announced in late February that he would be leaving the district at the end of the school year for a new position in the Chicago area. On April 5, the Board of Education announced that Andy Morrow, the district’s assistant superintendent for administration since 2014, would serve as interim superintendent beginning July 1, 2022.

Morrow’s interim appointment is through June 30, 2023, or until a new superintendent is appointed, and he indicated that he would not be applying for the permanent position.

At that April 5 meeting, the Board also appointed a Personnel Search Committee – which includes all seven members – and stated that the first step would be selecting a firm to assist in the process. “… collectively our Board recognized that we needed support in helping to do that,” Chair Lorna Thomas-Farquharson said during Thursday night’s virtual meeting.

The Board solicited proposals, and reviewed the proposals from three firms, she said.

“Based in Trumbull, CES has a well documented history of identifying and recruiting high quality and highly qualified leaders,” Morrow said in a statement following Thursday night’s vote. He said the Board of Education “looks forward to partnering with CES to fulfill this duty. Over the coming months, CES will conduct multiple means of outreach throughout the West Hartford community to create a profile of attributes for a new superintendent that will then guide the selection process through the fall.”

CES stood out for “the wealth of experience they have in superintendent searches and the positive outcomes as well,” Thomas-Farquharson said Thursday, utilizing a process that is “in-depth, collaborative, engaging, and intentional.” Feedback received from other districts that have used CES were extremely positive as well, she said.

The firm “will work with the Board and all stakeholders this summer and fall to collect information on the traits and leadership skills desired for West Hartford Public Schools’ next superintendent,” Thomas-Farquharson said.

A report on the progress will be provided at the first regular meeting of the Board for the upcoming academic year, scheduled for Sept. 6, 2022, as well as during subsequent meetings.