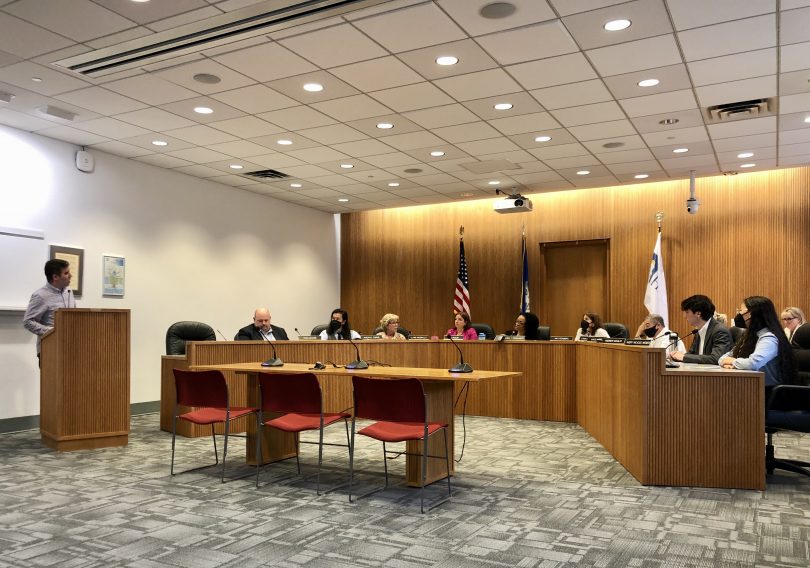 West Hartford resident Scott Zweig was one of many speakers during the public comment session of the April 19, 2022 Board of Education meeting. Photo credit: Ronni Newton (we-ha.com file photo)

The West Hartford Board of Education held a first reading of a recommended change to its policy on meeting conduct and public comment on Tuesday night, and plans to vote on the matter following a second reading in October.

The West Hartford Board of Education is considering amending its public comment policy in order to ensure that members of the community who wish to testify regarding agenda items are given priority as speakers before the business portion of a meeting begins, and once the total comment period reaches 30 minutes those who wish to address the Board on other topics will be given the opportunity at the end of the meeting.

As drafted (see PDF below), the proposed changes to policy 8355, “Meeting Conduct/Public Comment,” would keep the existing limit of three minutes per speaker and 21 minutes per topic in place. Multiple agenda items can be addressed by speakers during the first comment period subject to the per speaker and per topic time restriction. The 30-minute limitation to the first public comment portion of the meeting would apply only to speakers about non-agenda items, and only if the total comment period has reached 30 minutes.

Those desiring to speak at a meeting sign up in advance and indicate the subject of their comments, so the Board chairperson would be able to determine if speakers on topics not germane to the agenda would need to be asked to hold their comments to the end.

The proposed policy change also states that the chairperson can ask for the removal of any individual who interrupts a meeting or whose makes the orderly conduct of a meeting infeasible.

The intent of the policy change, interim Assistant Superintendent for Administration Anne McKernan said, is to provide a balance between allowing the public to address the Board about any topic of concern, while also allowing the Board to move ahead to the business at hand. The policy committee met three times over the summer to develop the amendment, she said.

Committee members include Board Chair Lorna Thomas-Farquharson as well as Board members Democrat Jason Chang and Republican Gayle Harris.

“Recently, the public comment period has sometimes been consumed by comments regarding matters that are not germane to the Board’s agenda, and extended public comment periods have significantly delayed the start of the business portion of some Board meetings,” McKernan wrote in the introduction to the proposed policy change. “Concerns have been raised that such delays are not fair to persons waiting to present on agenda items, or to other members of the public interested in the Board’s deliberation and action on agenda items. It can also be unfair to persons who wish to comment on agenda items prior to final action.”

Chang, who introduced the amended policy motion on Tuesday, said the members of the policy committee “all agreed on general principles,” which included preserving public speech, preserving dialogue, and getting to the board business.

“This is an important step for us to take so we can attain to the business of the Board of Education,” Chang said. “This proposed amendment seeks to strike a balance.”

Thomas-Farquharson said that this is not an attempt to limit public comment, but rather to ensure that those who have comments germane to the agenda can state them prior to any possible action by the Board. The Board is looking to “prioritize and ensure that we are sticking to the business items at hand,” she said.

Republican Ethan Goldman expressed some concerns with the policy change, particularly the impression that the Board may be rushing to alter the policy and stifle public comment.

“I think when we did the team names we rushed into the process,” Goldman said, referring to the Board’s decision to change the Conard and Hall high school nicknames, which was introduced as an agenda item on Dec. 7, 2021 and put to vote on Feb. 1, 2022.

“I think it is an important outlet … not just for parents, for students, for teachers,” Goldman said. He asked for statistics about how many times the comment period has gone over 30 minutes or over an hour, and how many of those comments were regarding either the team nicknames or social and emotional learning – topics about which many community members addressed the Board during the 2021-2022 session.

Goldman also suggested the section of the policy referring to disruptive behavior not be combined into the same policy, but rather addressed as a separate policy.

“I think that this is a really challenging issue because we do want to hear from the public … but also understand prioritizing the agenda items especially if we are going to vote on something that evening,” said Democrat Deb Polun, the Board’s vice chair, who also noted that email is a good way to get in touch with Board members.

Polun suggested making the policy more understandable and less full of legalese, and referring to the number of speakers rather than minutes to make it more straightforward. While not all speakers use the full three minutes they are permitted, the intent is really is to have seven speakers per agenda topic, and to require a prioritization of speakers for first public comment session if there are speakers about non-agenda topics and more than 10 in total signed up.

Polun also suggested making an exception for comments made by students.

Three residents spoke during Tuesday’s public comment session. Two of the speakers regularly address the Board on a variety of topics, and both commented Tuesday about the motion regarding public comment.

Attie Lordan said she has brought multiple concerns to the attention of the Board regarding potential conflicts of interest, hiring practices, etc., and said all that they have done was come up with a motion “as a way of silencing the people further.” She said the proposed change would silence all the students who have spoken passionately at the podium.

“We the people demand that our voices be heard,” Lordan said, adding that it is the responsibility of Board members to listen. “You swore an oath … you sit in those chairs,” she said.

Anita Avakelian also addresses the Board regularly on multiple topics. She asked that the Board provide clarification about the proposed changes to the comment period, and ensure that the details are posted in the minutes and made available to the public well in advance of the next reading.

The Board voted 6-1 to accept first reading, with Goldman, who said he preferred to wait until November for the second reading, voting against the motion.

A second reading on changes to policy 8355 will be planned for Oct. 18, 2022, and will include any edited language made by the policy committee following Tuesday’s meeting. After that reading, and discussion which may include further changes to the language, the Board will vote on the amendment.