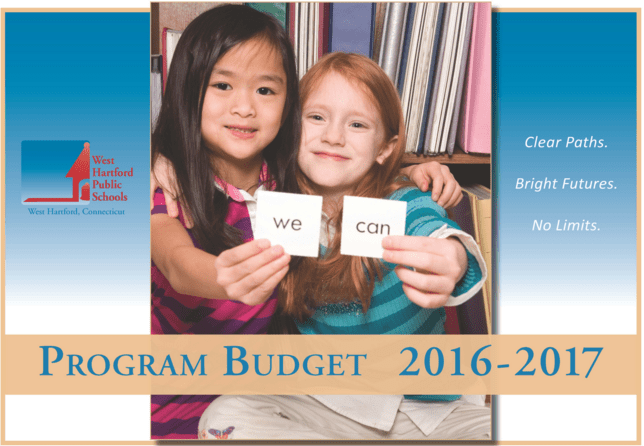 The West Hartford Board of Education approved Superintendent Tom Moore’s 2016-2017 budget Tuesday night without making any changes to the original proposal.

The vote was 5-1 along party lines in favor of the budget, with Republican Mark Zydanowicz casting the lone dissenting vote. Republican Jay Sarzen was absent from the meeting.

The biggest driver, a total of $2.86 million, comes from salary increases. The teacher’s contract, which takes effect on July 1, 2016, is “fair” Moore said when he presented the budget on March 1, and was arrived at in good faith without fighting or backstabbing. Most employees will receive a 2 percent salary increase plus step movement. Staffing levels have declined slightly due to decreased enrollment, and total salary costs for 2016-2017 will be $101,109,631.

Medical expenses in this year’s budget increased 5.73 percent, following a decline the previous year. Increased health care expenses are expected to be controlled in the future by a high deductible health plan that is part of the new teacher’s contract.

Charter Oak is projected to add $462,000 to the budget from increased QuEST expenses as well as new bus routes. Other transportation costs increased by $310,000.

Board members praised Moore, and Director of Financing and Planning Chip Ward, for the attention to detail and diligence in presenting the budget.

“I want to thank you all for the magic you did,” Board member Cheryl Greenberg said.

Vice-Chair Tammy Exum said she was amazed at the efficiency in the budget. “For all we are getting, the value we get – we have one of best schools systems around,” Exum said.

After several workshops, hearings, and a thorough review, the Board of Education did not make any modifications to Moore’s original budget document. “The budget you sent us was a real budget. We went through that budget and it’s all good,” said Board member Dave Pauluk said.

Carol Blanks, who along with Pauluk is one of the newest Board members, said that as she visited schools to help explain the proposed budget to families the reception was very positive. “I think that everyone knows that to get this great education it costs. You were able to look at everything and kept the cost down,” she said.

Zydanowicz said that he heard concerns in his conversations with the community, and has his own concerns that the budget has increased every year since he joined the board, despite declining enrollment.

“I think we have to look really hard to find some savings here in West Hartford. We can’t keep asking the taxpayers,” said Zydanowicz. “I know you guys have a great staff and you’ve come up with your best budget, but I cannot fully support the budget at these increases year after year.”